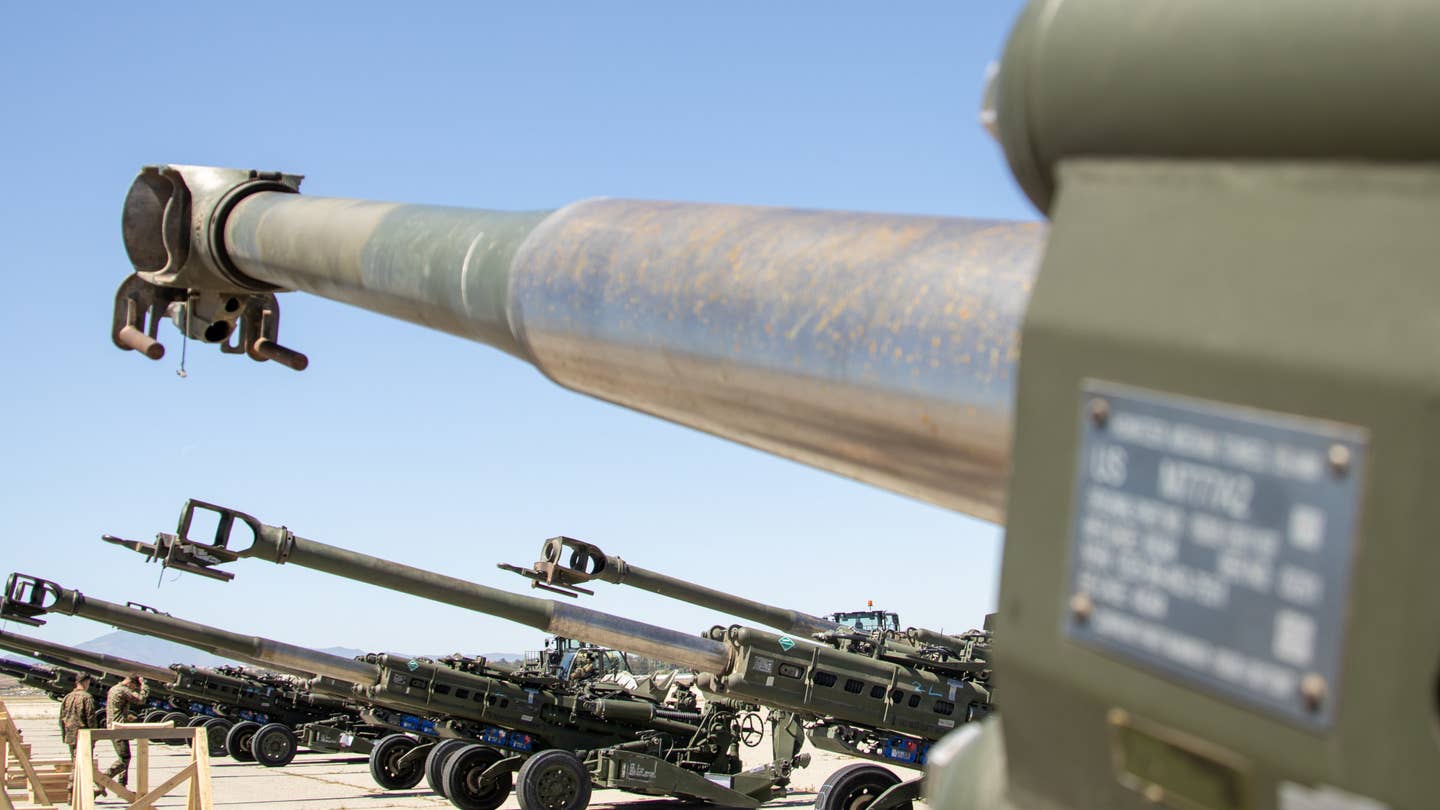 U.S. President Joe Biden has asked Congress to approve a huge new aid package for Ukraine valued at approximately $33 billion. The bulk of this money would go toward further expanding assistance to Ukraine's security forces, but more than $10 billion would also support humanitarian assistance and economic recovery efforts.

The value of this new proposed aid package is more than twice that of one that Congress approved back in March, just weeks after Russia launched its all-out invasion on Feb. 24. The security assistance component dwarfs the $3.4 billion worth of aid that the U.S. government had actually delivered as of last week, as well.

Military assistance and other aid packages for Ukraine from the United States and other countries have surged in recent weeks amid renewed Russian offensives, along with assessments that the conflict is likely to drag out at least for a number of months and possibly into next year. NATO Secretary-General Jens Stoltenberg said today that the alliance's members were prepared to keep supporting Ukraine's armed forces for years, which would help move the country away from its current reliance on Soviet-era weapons and other equipment.

In what is becoming a growing sideshow to the conflict inside Ukraine, there were reports earlier today of new blasts in Russia's southern Belgorod region, as well as air defense activity there. The circumstances surrounding this growing spate of explosions in Belogord and other areas of Russia bordering Ukraine remain murky, but there are suggestions that this could be part of a concerted Ukrainian effort to bring the fighting to Russian soil, as you can read more about here.

Before getting into the latest updates below, The War Zone readers can first get themselves up to speed on the existing state of the conflict in Ukraine through our preceding rolling coverage here.

Biden officials briefed reporters earlier today on the proposed $33 billion aid plan for Ukraine ahead of an official rollout. Of that total, $20 billion would go toward assisting the Ukrainian military and other security forces, and would also cover efforts to backfill U.S. stocks of certain weapons and support allies and partners in their transfers of materiel to the Ukrainian armed forces in the process. Another $8.5 billion and $3 billion would go toward economic assistance and humanitarian aid, respectively. How the remaining $1.5 billion would be spent is unclear.

The new aid package would include more armored vehicles, artillery, air defense systems, anti-armor weapons, cyber warfare support, and more according to the Whtie House. U.S. military assistance, as well as aid from other countries, has increasingly included higher-end systems, including tanks and other armored vehicles, heavy artillery pieces, and unmanned aircraft. The latter category includes loitering munitions, also known as suicide drones, including the previously unknown Phoenix Ghost design, about which little has been revealed so far.

This news from the White House came around the same time as reports emerged about NATO Secretary-General Stoltenberg's comments on the alliance's continued assistance for Ukraine. His remarks about helping the Ukrainian armed forces advance from Soviet-era weapons and equipment come as new aid packages have increasingly included NATO-standard weapons and other systems, especially 155mm howitzers. Previously, much of the alliance's focus had been on delivering Soviet-designed systems that Ukraine's military has existing experience with.

As a result, the U.S. and other countries have been setting up new training programs, including at various locations in Europe, to instruct Ukrainian personnel on various systems they are now receiving, or are set to get, in the near future.

In line with all of this, Germany's parliament, or Bundestag, resounding voted in favor of stepping up military assistance to Ukraine. This provides additional legal support for a slow shift in German government policy on this matter, which had already begun to emerge earlier this week.

A senior U.S. defense official did note today that it is unclear whether or not Russia had succeeded in destroying any Western military aid shipments after they entered Ukraine. At that point, "it belongs to them...what they do with it, where they store it, how they deliver it to their troops, that's their business," they said.

Even before Russian forces launched their reinvigorated offensives in eastern and southern Ukraine last week, it had become apparent that Ukraine's military would need more robust assistance, including tanks and armored vehicles and artillery, to help hold the line. A senior U.S. defense official said today that Ukrainian units have so far succeeded in limiting Russia's military to "slow," "uneven" and "incremental progress" in its main thrust into the eastern Donbas region.

At the same time, the senior U.S. defense official noted that the Russian military is moving more forces into the region. The U.S. military says this has included taking units away from the ongoing siege of the remaining Ukrainian defenders in the southern port city of Mariupol and bringing in fresh conscripts to help with the regrouping of units pulled from areas of northern Ukraine.

Mercenaries from the ostensibly private Russian military company Wagner, which has strong ties to the country's intelligence services, are providing additional manpower. There are still indications that the Russian government is still trying to recruit individuals from foreign countries, especially in the Middle East and Africa, to fight in Ukraine. It remains unclear if any such forces have actually arrived on the battlefield.

Furthermore, the Russian military appears to be employing naval forces in the Black Sea to hold areas of western Ukraine at continued risk, preventing Ukrainian units in those areas from redeploying to support operations in the east. The U.K. Ministry of Defence has separately assessed that the Russian Navy retains significant combat capacity in the Black Sea region despite the embarrassing loss of the cruiser Moskva, which sank after reportedly being struck by Ukrainian Neptune anti-ship missiles. Separately, USNI News reported that satellite imagery had indicated that Russian forces may have deployed trained dolphins at the Sevastopol naval base on the occupied Crimean Peninsula, possibly to guard against enemy combat divers.

Questions do still remain about how long Russia may be able to keep up any momentum it gains in the coming days given command and control and other operational issues its forces are still experiencing after more than nine weeks of fighting. Environmental factors, such as spring weather in Ukraine leading to muddy terrain, could impact Russian advances, too.

Outside of Ukraine, there were reports of two large explosions today in Russia's neighboring Belgorod region. Pictures and video had emerged beforehand reportedly showing surface-to-air missiles being fired at unknown targets in that area of the country, though that remains unconfirmed. This is the latest in a string of still largely unexplained cross-border incidents, which have prompted speculation about a possible Ukrainian effort to attack targets in Russia or some kind of Russian false flag operation to justify new strikes on Ukraine, including the capital Kyiv.

Interestingly, amid all of this, a video recently appeared online showing Russian orthodox clergymen flying with an icon and a lantern holding a sacred flame in a Russian military helicopter over the Belgorod region.

Whether it was related to the latest incident in Belgorod or not, Russian cruise missiles did strike targets tonight in Kyiv, following visits by U.N. Secretary-General António Guterres and Bulgarian Prime Minister Kiril Petkov. Bulgaria is the latest in a string of NATO members, including the United States, to send senior officials to meet with their Ukrainian counterparts in the country's capital, despite the obvious continued risks.

Russia's Ministry of Defense has confirmed missile strikes on Ukraine, saying it targeted six sites used to store weapons and fuel across the country. A senior U.S. defense official said earlier today that Russia has now fired more than 1,900 cruise and ballistic missiles at Ukrainian targets since the conflict began.

The U.S. government says it has seen increasing indications that the Russian government may be preparing to install its own authorities, or ostensibly local proxies, in areas of Ukraine under its control. This comes as worrisome reports have also grown about the forcible deportation of Ukrainians from many of those areas.

Separately, Sergei Naryshikin, head of Russia's Foreign Intelligence Service, or SVR, has claimed, without providing any evidence, that the United States and Poland are planning a military intervention into western Ukraine. This comes amid escalating rhetoric from other Russian officials, including President Vladimir Putin, as well as politicians and other significant figures in the country, warning of a broader regional conflict, potentially one involving nuclear weapons.

The video below gives an interesting behind-the-scenes look at a Ukrainian Osa surface-to-air missile system in action.

There are indications that Russia is stepping up cyberattacks inside Ukraine and elsewhere around the world as an aside from the conflict.

Ford announced today that 50 Ranger pickup trucks that it had donated to Ukraine have now arrived in the country.

The European Union has made clear that it is a violation of the bloc's sanctions on Russia to pay for oil and natural gas imports in rubles, as Moscow has demanded. This comes as EU countries are under pressure to keep those resources flowing. Hungary, among others, has already agreed, at least in priciniple, to the Russian government's new currency requirements.

The U.S. House of Representatives has passed legislation, which would still need to clear the Senate and be signed into law by President Biden, that could allow seized Russian assets to be used to support reconstruction efforts in Ukraine.