Major Hunt For Red October vibes from this image of a CV-22 hovering over a U.S. Navy nuclear guided missile submarine. 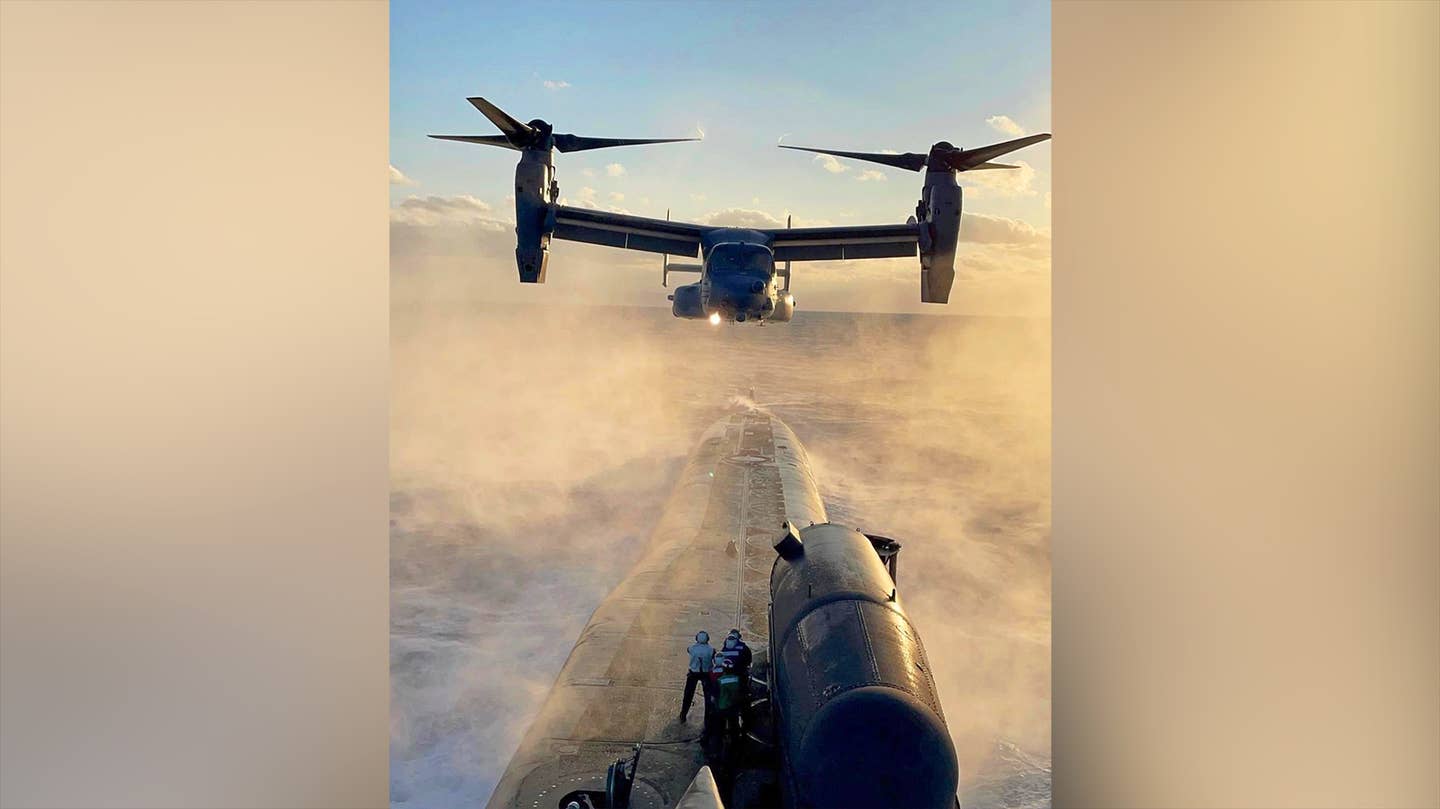 Submarine shots rarely get cooler than this. An image recently shared by our friend the @thenewarea51 shows a Bell-Boeing CV-22 Osprey conducting submarine logistics operations with an Ohio class nuclear-powered guided cruise missile submarine, or SSGN.

Although the exact submarine depicted has not been confirmed, it is most likely the USS Georgia (SSGN-729).

Images posted on social media by U.S. Special Operations Command on April 22 provide more clues as to which submarine is depicted and where the image might have been taken. These pictures are from an exercise that the 352d Special Operations Wing conducted in the Eastern Mediterranean Sea in December 2021 to test its ability to provide rapid infiltration and exfiltration capabilities to support a range of missions with an unidentified SSGN identical in appearance to USS Georgia. It seems likely, therefore, that the photo was taken in the moments before or after the special operators winched onto or off of the submarine.

USS Georgia has been spotted in various European waters over the last few months. Back in January, the U.S. Navy’s own Sixth Fleet released pictures of the submarine near the Mediterranean island of Cyprus – no doubt in a deliberate attempt to bolster NATO’s visible presence in the region in the wake of Russian threats against Ukraine. She was also publicized doing special operations training with Marines out of Souda Bay, Greece on March 27.

Following a stint off the coast of Gibraltar, which ended on April 22, it was speculated that USS Georgia had returned to patrol the Eastern Mediterranean.

With the sea-swirl kicking up under the CV-22’s prop-rotors, the image shows how exhilarating the operation must have been for the commandos involved. The Osprey is an especially attractive option for accessing America's nuclear submarines while on patrol.

The type's range and speed allow it to go where helicopters cannot and do so faster, as needed. This could include executing medical evacuations, delivering small cargoes, or moving special operations personnel on or off a submarine. The latter is especially relevant for the Navy's four SSGNs, which have a fundamental special operations mothership and command and control mission that you can read all about here.

Of course, the V-22s could convey other kinds of personnel. These kinds of tense human transfers were made famous by Hunt For Red October, of course.

Hopefully, the special operators aboard the Osprey had a much less eventful time than Jack Ryan during their transfer!