Typhoon, which is the third fighter type in Qatar’s new multirole fighter acquisition initiative, is planned for delivery later this year. 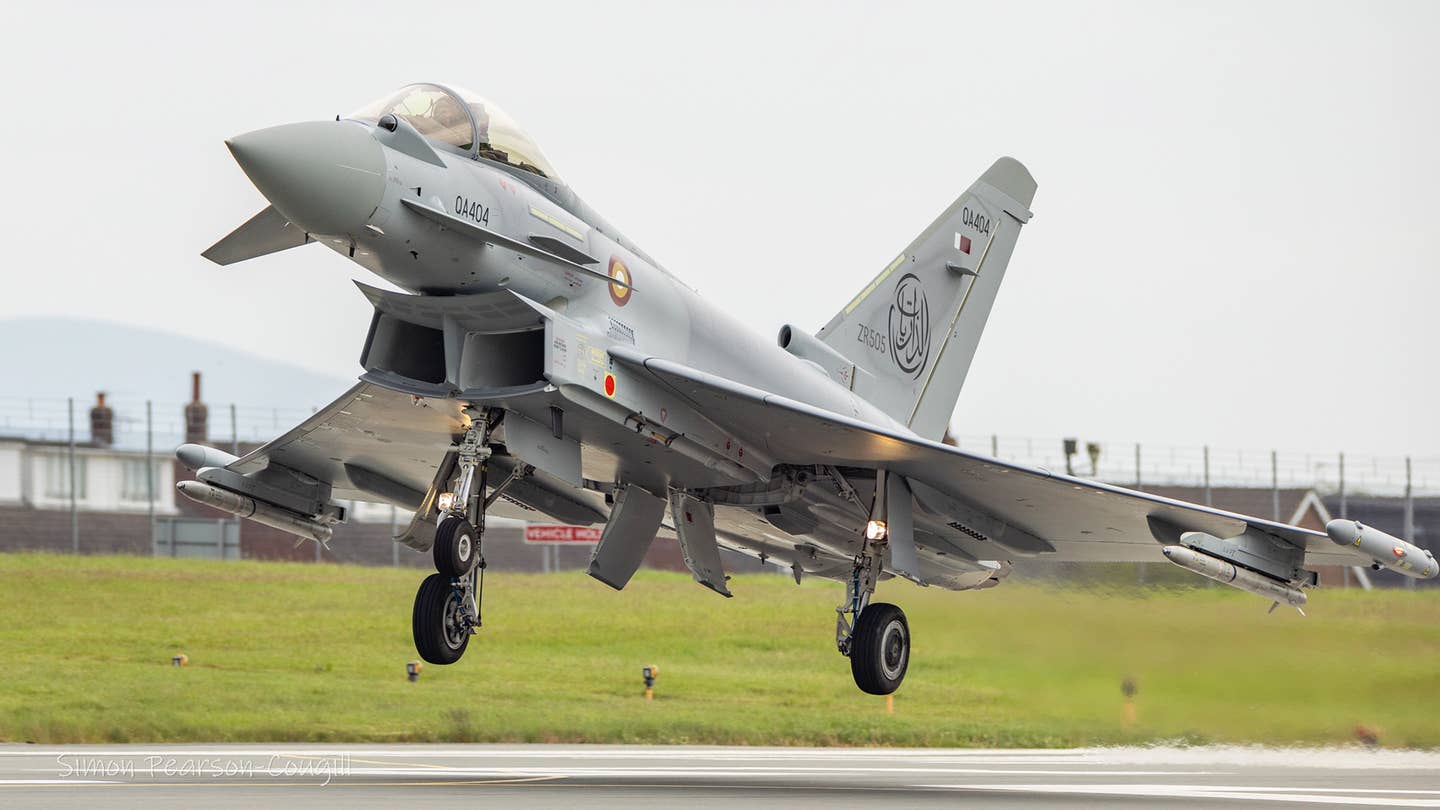 The first Eurofighter Typhoon for the Qatar Emiri Air Force, or QEAF, has begun test flights in the United Kingdom wearing its in-service colors. The camouflage scheme has some similarities with that applied to the QEAF’s F-15QA and Rafale fighters, although is a little more subdued. Most importantly, however, these latest test flights are paving the way for the first Typhoon deliveries to Qatar, planned for later this year. This is all part of a remarkable expansion and modernization effort for the QEAF, something we have looked at in-depth in the past.

Aviation photographer Simon Pearson-Cougill shared with The War Zone a series of photos taken at BAE Systems’ Warton facility, in northwest England, yesterday. They confirm that the first Typhoon for the QEAF, single-seater serial number QA404, now wears its intended camouflage scheme. The jet, which also carries the temporary U.K. serial ZR505, made an approximately hour-long sortie from the factory airfield using the callsign TARNISH 10. The jet has made its maiden flight, in primer paint, last November.

Following orders for the F-15QA and Rafale, Qatar signed a Letter of Intent (LOI) to purchase Typhoons back in September 2017. In December of the same year, it placed an order for 24 of the jets as part of a wider deal valued at around $6.6 billion. The package also included six Hawk Mk 167 advanced training jets (later increased to nine) as well as support and training services.

As it stands, the breakdown between single-seat and two-seat Typhoons ordered for the QEAF is unclear, but at least one other single-seater is now under test at Warton, as serial ZR508. Unconfirmed reports suggest the Qataris will eventually operate 18 single-seaters and six two-seat versions.

Like the F-15QA and Rafale, the Typhoons have been procured as multi-role fighters with advanced air-to-air and air-to-ground weapons. These include Meteor beyond-visual-range air-to-air missiles (BVRAAMs) plus Brimstone and Paveway IV precision-guided munitions for attacking ground targets.

The Qatari Typhoons are also fitted with the Leonardo European Common Radar Standard Mk 0 radar, or ECSR Mk 0, which features a modern active electronically scanned array, offering a range of capability benefits. These are the first British-assembled Typhoons to feature this radar, which is the product of a very protracted development process. The ECSR Mk 0 is being installed in Typhoons for Qatar and Kuwait (the latter assembled in Italy) and is one of three discrete radar types that are in development for the jet.

A key to the performance of the radar is the steerable swashplate, or ‘re-positioner,’ essentially a moveable mounting onto which the radar antenna is attached. This can be tilted to either side, providing a much wider ‘look’ angle beyond 90 degrees off the centerline of the jet, which has major tactical advantages in some scenarios.

The ECRS Mk 1 version is expected to be retrofitted in existing German and Spanish Eurofighters, and provided in new-build jets for both countries. Meanwhile, the more advanced ECRS Mk 2 is planned to replace the original mechanically scanned radar in at least a portion of U.K. Royal Air Force Typhoons.

While the exact status of radar testing for Qatar is unclear, one visible change on the Qatari jets is a new pair of blade aerials, one fitted on each side of the tail fin. The function of these is unknown but The War Zone has reached-out to Eurofighter for comment.

Ahead of Typhoon deliveries to Qatar, expected in the final quarter of this year, QEAF personnel have been training on the jets in the United Kingdom within a unique joint U.K.-Qatari unit. This is No 12 Squadron, stationed at RAF Coningsby, Lincolnshire, established in 2018 to provide operational training for QEAF pilots and ground crew.

Ultimately, at least a portion No 12 Squadron will head to the Middle East to continue its mission, including providing air defense coverage for the 2022 FIFA World Cup in Qatar, to be held in November and December, before returning to the U.K.

The U.K.-Qatari Typhoon unit was followed by a training squadron which adheres to a broadly similar format. This is No 11 Squadron (Qatar), established at RAF Leeming in North Yorkshire last November. This unit also trains RAF students alongside their QEAF counterparts, providing a useful boost for much-needed fast-jet pilot output. For the Qataris, the program is intended to provide eight pilots and six weapons systems operators annually.

With the advanced training syllabus up and running on the Hawk in the United Kingdom, and with other advanced jet training jets now also in use in Qatar, the QEAF is fast developing its fighter capabilities.

Ultimately, the QEAF will field 36 Rafales, 36 (or even 48) F-15QAs, and 24 Typhoons, after an exceptional period of growth and modernization. And with the first of the Qatari Typhoons now gearing up for delivery, the third and final piece of the QEAF’s fighter puzzle — for now — is a step nearer to completion.