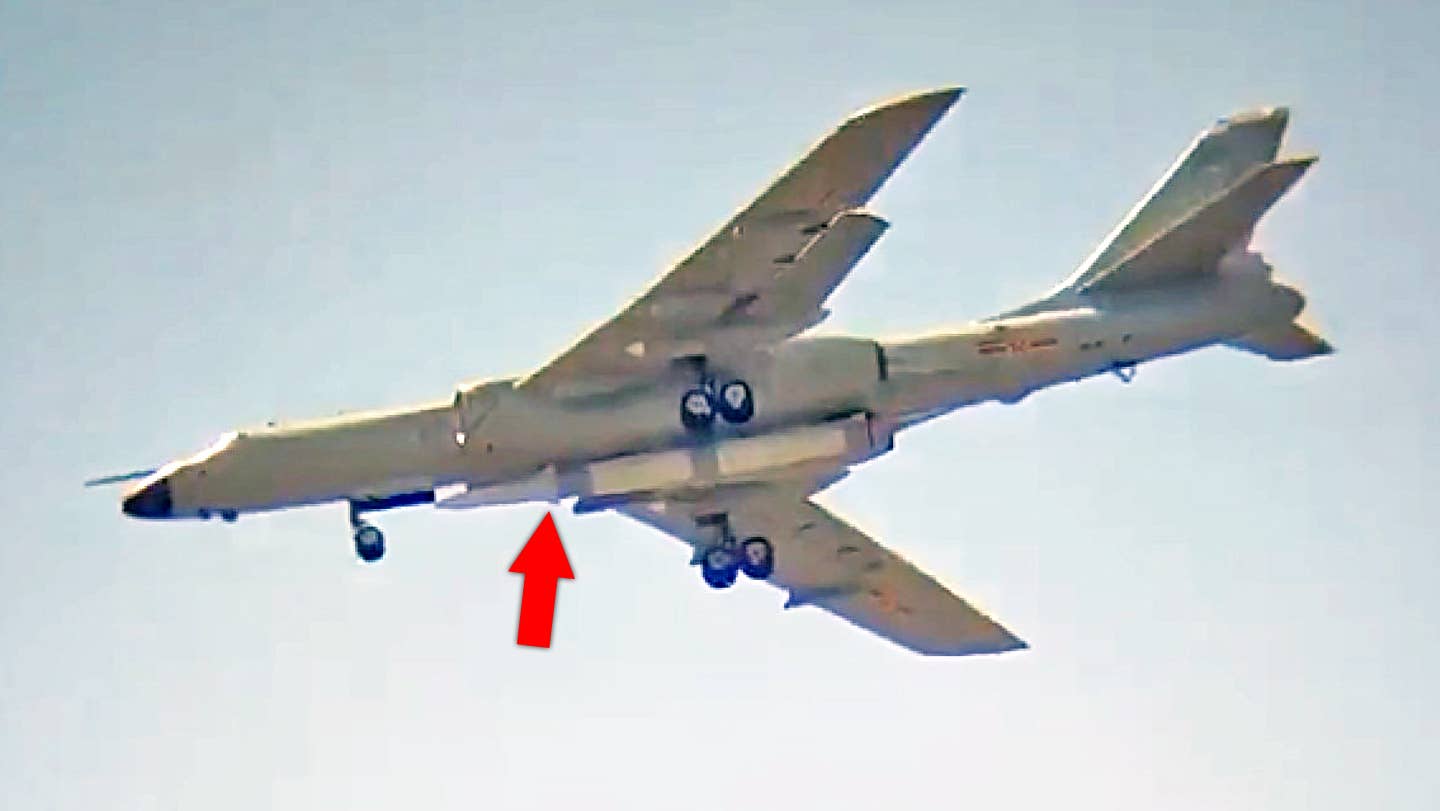 A new video has appeared providing us with an unprecedented view of a Chinese People’s Liberation Army Air Force (PLAAF) Xian H-6N bomber carrying an air-launched anti-ship ballistic missile, or ASBM, a highly intriguing weapon that we have looked at in detail on more than one occasion in the past. Known also by the Western designation CH-AS-X-13, this missile remains in many ways mysterious, so any chance to get a better look at it is welcome indeed.

The video, and stills from it, began to circulate on social media today, with the original footage posted to Twitter by a user, apparently based in China, with the handle @lqy99021608. No further details about where or when the video was taken are available, but the huge missile on the centerline of the H-6N certainly appears to be related to the YJ-21, or Eagle Strike 21, a weapon that is itself thought to be a ship-launched version of the ground-based DF-21D (CSS-5 Mod 5), another anti-ship ballistic missile that reportedly became operational in 2010.

What’s less clear, at this point, is the service status of the air-launched ASBM. The Western CH-AS-X-13 designation points to a weapon that is still undergoing pre-service trials. According to the U.S. Defense Intelligence Agency’s China Military Power report of 2021, the H-6N is now operationally fielded, although the same document does not make specific mention of the status of the missile, to which it attributes a possible nuclear capability. The markings on the aircraft in the video suggest it may well be an in-service example but we simply don’t know for sure. At the very least, it’s not a factory-fresh aircraft like the one seen in yellow primer back in 2017.

As to the H-6N, this variant of the prolific H-6, itself a Chinese-built development of the Soviet-era Tu-16 Badger, has been tailored for long-range strategic missions, aided by its aerial refueling capability. At the same time, the aircraft has been adapted for the carriage of outsized loads, not only the ASBM but also high-speed drone aircraft and potentially hypersonic boost-glide vehicles. You can read all about the H-6N variant and its strategic implications in this past piece of ours.

While the value to Beijing of a long-range strike aircraft able to haul anti-ship ballistic missiles to launching points far from Chinese shores is clear, it’s fair to say that little is known for certain about this particular ASBM.

Most analysts agree, however, that the ASBM is a development of the DF-21D that has become something of a poster child for China’s evolving anti-access/area-denial (A2/AD) strategy. With an estimated range of between 800 and 900 miles, the DF-21D is thought to carry a conventional warhead and is able to maneuver dynamically during its reentry phase, providing it with the ability to attack moving warships.

Moving with the hypersonic terminal velocity common to ballistic missiles, the DF-21D — and by extension, the air-launched ASBM — would provide warship captains with a particularly challenging threat. Hurtling toward a surface combatant at hypersonic speed and at a steep angle of descent, most traditional naval defensive systems would be rendered redundant. It’s little surprise, therefore, that this category of weapons has been dubbed ‘carrier killers.’

Ultimately, as part of a wider A2/AD strategy, it can be envisaged that air-launched ASBMs and ship-launched YJ-21s would be deployed in concert with ground-based DF-21Ds to help keep U.S. carrier strike groups at a distance far enough from Chinese shores to make their fighter aircraft and cruise useless.

The Theodore Roosevelt Carrier Strike Group and the Makin Island Amphibious Ready Group operate together in the South China Sea in April 2021:

That’s the theory, at least, but all these strike systems would need accurate and up-to-date targeting data to make them lethal. The kinds of sensors available to these ASBMs during their terminal attack phase are unclear, but they almost certainly rely on radar and perhaps infrared sensors fitted to the reentry vehicle.

Just as critical is the original targeting data and mid-course updates that would be supplied by external sources and data-linked to the launching platform prior to the missile taking flight, and perhaps during its mid-course phase. Ground-based over-the-horizon radar, surveillance satellites, long-range maritime patrol aircraft, and high-altitude long-endurance (HALE) drones could all potentially be used for fixing target coordinates.

However, with the DF-21D supposedly operational now for more than a decade, it can be expected that the PLA has made efforts to refine the entire targeting and attack chain for this weapon, which could be ported over to the air-launched ASBM, too.

Of course, the advantage of launching ASBMs from H-6Ns is that the missiles’ range can be extended beyond what would be possible for an equivalent ground-based system. Essentially, the A2/AD bubble can be pushed out further from China’s coasts through a combination of the air-launched ASBM and YJ-21 together with advanced new attack submarines and the ASBM version of the longer-ranged, land-based DF-26 missile, as well as other capabilities.

In the case of the air-launched missile, the ASBM would not only benefit from the range of the aircraft itself, thought to be around 3,700 miles without aerial refueling, but launching the missile from altitude would further extend its reach significantly. At the same time, having ASBMs moved around by aircraft makes them inherently more survivable than their land-based counterparts.

As well as the H-6N’s ASBM capability, there have been persistent reports that the aircraft is also intended as a launch platform for another type of outsized weapon: an air-launched hypersonic missile.

Like the ASBM, this would be based on an existing ground-launched design, probably the DF-17, which features a boost-glide vehicle as its terminal stage. Like the DF-21D ‘carrier killer,’ the DF-17 is considered operational in its land-based form, but the status of an air-launched version remains unclear.

If China is indeed pursuing an air-launched hypersonic missile, such as a DF-17 mated to the H-6N, that would parallel similar developments in the United States.

Earlier imagery, which appeared in October 2020, showing an H-6N carrying a possible ASBM or a hypersonic weapon:

Again, the ability to bring a hypersonic missile hundreds or thousands of miles from Chinese territory would further enhance the A2/AD strategy, with a weapon of this kind perhaps being intended to bring key enemy installations within striking range. These might include Andersen Air Force Base on Guam and Wake Island, for example. A weapon of this kind could also have an application against high-priority warships, too.

As it stands, however, analysts seem to be in broad agreement that what we are seeing in this latest video is indeed an air-launched ASBM. While that may represent a technology that’s somewhat less ambitious than an air-launched hypersonic missile, its significance is hardly reduced. As it stands, and despite the unclear operational status of the air-launched ASBM, it’s further evidence of the strides that China is making in the field of A2/AD. In this scenario, the kinds of threats that the U.S. Navy and allied warships will face in the future are only becoming more challenging as the range at which these weapons can strike continues to grow.

Newly visible details further indicate that China is developing an air-launched hypersonic weapon, one that may be air-breathing.