The B-52 Flight Simulator Trains Of The Cold War

Strategic Air Command KC-135 and B-52 crews trained inside trains during the Cold War. 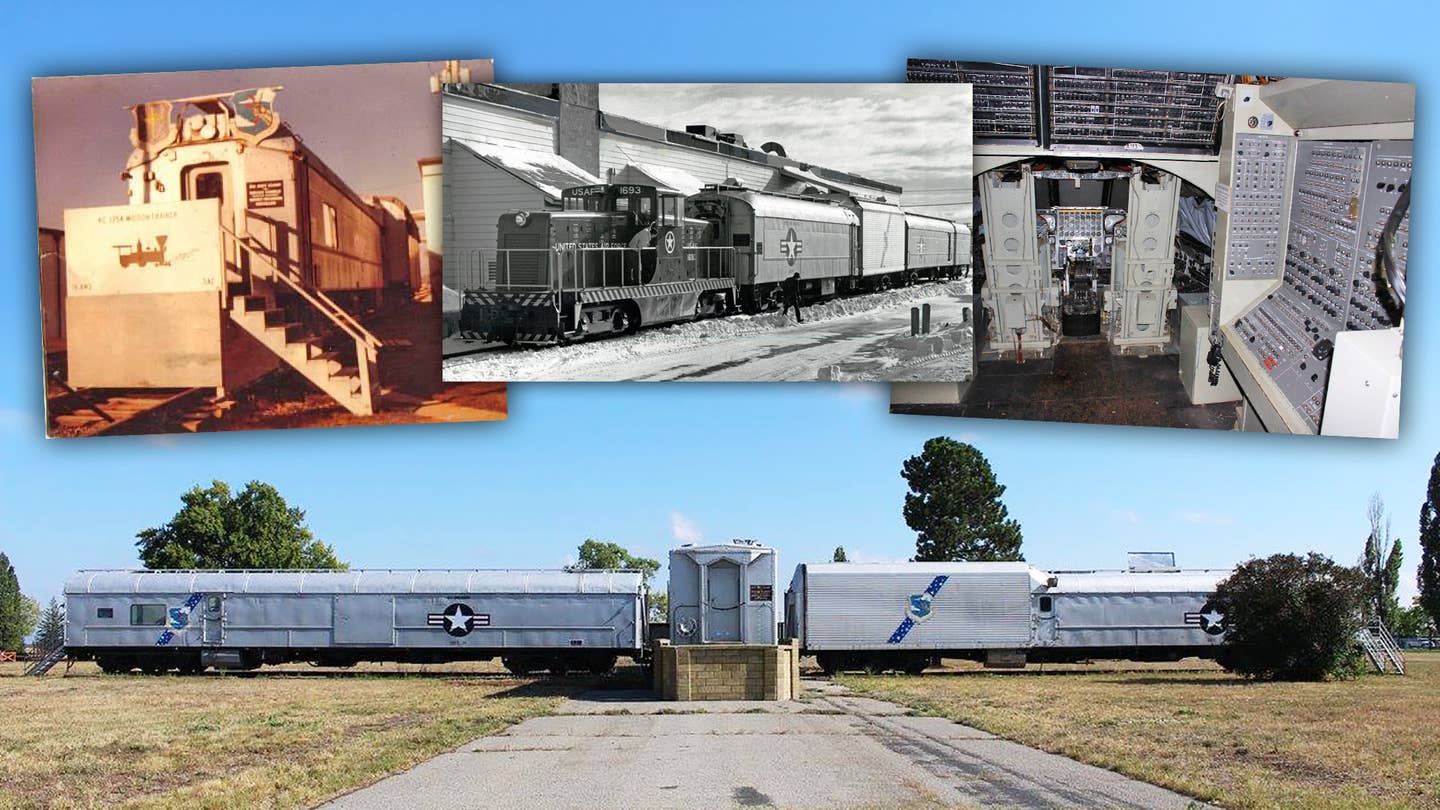 A military aviation and transportation anomaly exists on Fairchild Air Force Base in Washington State, known to allure train, aerospace, history, and military buffs alike. What is left of the Strategic Air Command’s (SAC) B-52D Stratoforess and KC-135A Stratotanker mobile simulator train has remained a fixture of the base since the 1960s, and may very well be the only remaining example of one of these mobile Cold War marvels.

The train cars, officially called Mobile Simulation Training Centers or MSTCs, were developed at the height of the Cold War in hopes of addressing the challenges brought on by both a shortage of then cutting-edge flight simulators and the need to keep flight crews near the bombers and tankers they flew. Both flying assets — the B-52 and the KC-135 — were (and still are!) critical components of America’s nuclear deterrent.

In response, SAC came up with the novel idea of having the simulators go to the flight crews instead of them going to the simulators. By traveling to the bases where the B-52s and KC-135s were stationed, pilots and crew members could stay sharp on cockpit procedures without the need to build the costly simulators at each base — at least that was the idea.

Each of the 18 MSTCs was made at Hill Air Force Base in Utah by heavily modifying two Pullman passenger cars, which were originally built between 1911 and 1928. The result included the main simulator car that measured 85 feet in length and weighed in at around 200,000 pounds, making them some of the longest types on the tracks at the time.

According to a story published by Fairchild AFB and written by Jim O'Connell, 92nd Air Refueling Wing Historian, the B-52 simulator at the base is made up of two train cars: the 1917-built Alpine Clover, and the 1928-built Andrew Squires.

Alpine Clover is home to the simulated B-52 cockpit and corresponding computers, while Andrew Squires was home to computer benches, work areas, storage cabinets, and an administrative area.

“During the Cold War there were always KC-135s and B-52s in the air,” Whitfield said. “The Air Force had to maintain a ton of training to keep our pilots up in the air, ready to do their missions. With these simulators, they could hook-up a single train engine and haul them to wherever they were needed next.”

And hauled they did. The simulator train cars traveled across the country, providing bomber and tanker pilots with the experience they needed to fly without the cost that would be associated with equipping each B-52 and KC-135 capable base with its own simulators. Like all simulators, the trains provided a much safer and more contained environment for training, and especially for going over major failures that crews would have to react to fast. Massive analog computers were installed in the cars to make the training experience as realistic as possible.

In the mid-1960s, SAC had a change of heart. It was decided that constantly rolling these flight simulator behemoths to their respective B-52 and KC-135 stations was becoming less than ideal. In some cases, it was cheaper to just fly pilots and crew members directly to the simulators, and thus some of the flight simulation train cars stopped moving. Fairchild, for example, became the permanent home to a pair of them in 1964.

Lackey goes on to explain that this was also a strategic move made by the SAC when considering how paramount stateside training became for the Vietnam War effort. The B-52D model flew with some of the heaviest bomb payloads that American forces had carried during the Vietnam War. Between 1952 and 1962, Boeing produced 744 B-52 aircraft in multiple configurations, with the D variant being the most heavily used during the Vietnam War.

Given that the B-52Ds were retired between 1978 and 1983, the mobile flight simulation train cars did appear to operate in tandem with the lifespan of these aircraft. It is thought that at least the KC-135A simulators soldiered on a bit longer, until 1989, which is remarkable considering that they were built in the 1950s. However, that isn’t to say that the systems housed in these train cars weren’t a part of the advancement of future military flight simulation technology, which had been evolving for decades before MSTCs first entered service.

Beginning first as rudimentary technology that typically involved modified versions of the aircraft and the occasional balloon attachment, flight simulators soon graduated to ground-tethered devices, such as the Gabardini captive monoplane that was built in the 1910s. In the late 1920s and early 1930s, Edward Link’s renowned Link Trainer was introduced, designed to include attitude disturbances, measure reaction times, and respond to aerodynamic forces.

The Link Trainer remained the predominant flight simulation technology for over a decade until Dr. Richard Dehmel of Curtiss-Wright Corporation patented Dehmel’s Trainer in 1950. According to the National Center for Simulation, “The invention was the first to solve the equations of flight and have the controls and instruments of the trainer respond as an accurate equivalent of a real airplane.”

In 1953, Curtiss-Wright was awarded a contract by the USAF to design and build an all-electronic simulator for the B-52 bomber. In a newspaper clipping published in the same year, the training units are described to be so realistic that the flight crews would experience the exact sensation of being in the air.

It is unclear whether or not the Mobile Simulation Training Centers leveraged any of Dr. Dehmel and Curtiss-Wright’s pioneering technology. But what is certain is that without them, the train-based systems now memorialized at Fairchild would not have existed or been as pivotal in Cold War and Vietnam efforts as they are known to have been.

As flight simulation systems became more advanced, the train car simulators struggled to keep up and were eventually determined to be obsolete. Following official retirement in 1989, it was decided that the train cars would be scrapped for spare parts and B-52 and KC-135 fleet upkeep. However, Alpine Clover and its sister cars remained intact.

In his story, Lackey explains that retired Col. Arnold Weinman, former 92nd Air Refueling Wing commander, was then approached with the idea of adding the remaining train cars to what was then known as the Fairchild Air Force Base Heritage Museum. The chance to show the public what these flight simulators were all about during their heyday appealed to Weinman, and thus Operation Cannonball was initiated.

Beginning on November 1, 1990, a 20-person team led by Maj. Jerry Kolstee, the wing project officer, and Sgt. George Hledik, tapped Fairchild’s past as an Army Air Corps supply and repair depot to make the move possible. The team used 2,000 feet of spare tracks stored on-site and worked in four-hour blocks to relocate the flight simulation train.

Both volunteers and Fairchild officials worked to move the rolling flight simulators from their original resting point outside the base’s coal plant across from what used to be the base's personnel office and now belongs to the 92nd Comptroller Squadron. Weinman reported that the team would work in 20-foot increments, laying down section after section of the reclaimed track until the final destination was reached.

On November 16, 1990, the train cars were officially dedicated to the museum. Alpine Clover and the sister train cars are now permanently parked at Fairchild Air Base's Heritage Airpark, the former location of the Heritage Museum, which closed in 2002 by order of the Pentagon.

While the cars’ interiors have undoubtedly aged, photographs that have been taken within their Air Force gray outer shells offer a closer look at the technological relics. Today, inside Alpine Clover, the walls are lined with 14 once cutting-edge analog computer panels needed to operate the B-52 flight simulator along with informational signage explaining that today’s home computer is capable of 10 times the computing power. Of course, it isn’t clear when these signs were put up, so that comparison is likely much more severe today.

Another shop of the B-52 simulator's 'brains.' USAF photo

Little John, however, is now an echo chamber. What once housed the KC-135 flight simulator is now a spacious, metallic hull that has since been harvested for its computers and machinery. While it is still a part of the overall display, minimal lighting and empty walls make it difficult to even comprehend its original purpose.

Next door, Andrew Squire offers a more welcoming atmosphere. The administrative area encapsulates the essence of their original purpose as Pullman passenger cars. Faded blue carpet is installed across the floors and nearly identical blue leather is stretched across a small seating area near a stove, a hot plate, and a set of antiquated cabinets that may share a likeness to the homes built during this period.

While the public has limited access to these fascinating train cars today, they still sit as a shrine to early jet-age innovation and the dawn of advanced flight simulation. They are truly a nexus of sorts between the rails and the sky that only existed because of the nuclear age and the great standoff between superpowers.