by
Joseph Trevithick,Thomas Newdick,Tyler Rogoway
May 6, 2022 4:39 PM
The War Zone 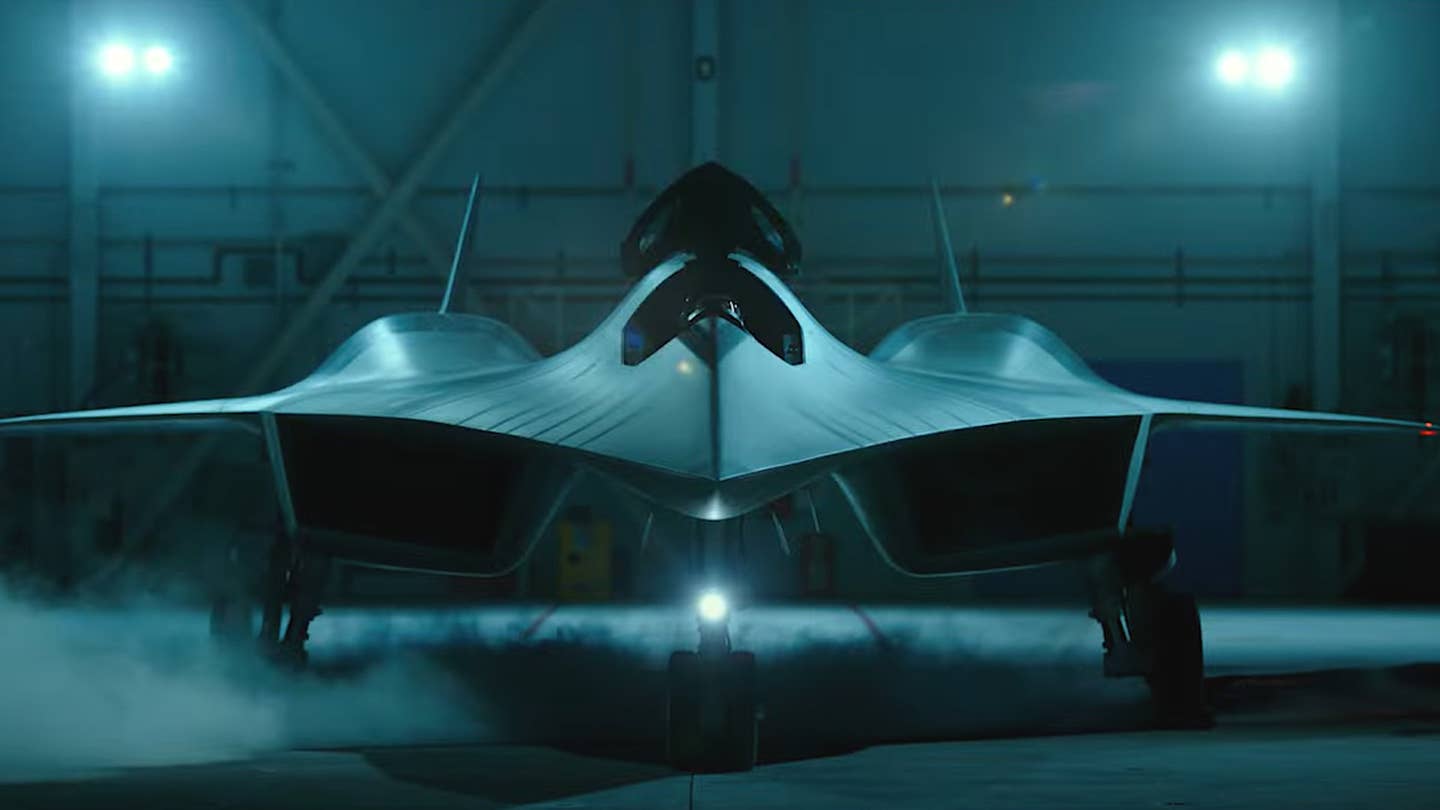 Darkstar, the fictional secret hypersonic jet from the hotly anticipated new Top Gun: Maverick film, set to release May 27, might just be a whole lot more realistic than we previously thought. The chairman, president and CEO of Lockheed Martin Corporation, James Taiclet, has confirmed that the company's legendary Skunk Works advanced projects division worked with the producers of the movie and helped create the fictional design.

The War Zone had reached out to Skunk Works directly regarding this collaboration. They would not comment directly but subsequently directed us to a post that Taiclet made on LinkedIn following the world premiere preview showing of the movie at the U.S. Navy's Naval Air Station North Island's Lowry Theater in San Diego, California, this week. Taiclet said that members of the Skunk Works team had “partnered with Top Gun’s producers to bring cutting-edge, future forward technology to the big screen” before referencing “critical work in hypersonic flight.”

That admission follows a previous Tweet by a Lockheed Martin executive, John Neilson, the Director of Communications for Europe, the Middle East, and Africa, in which he pointed to rumors that the fictional jet could provide a “sneaky peak at what might be the Lockheed Martin SR-72.”

That would, at least, explain the configuration of the fictional Darkstar, which is broadly reminiscent of renderings of the long-teased SR-72 hypersonic jet. The latter was the subject of no small amount of public discussion by Lockheed Martin between 2016 and 2017.

Billed as a potential spiritual successor to the legendary SR-71 Blackbird, the SR-72 concept proposes an unmanned reusable hypersonic military aircraft that would be capable of carrying out intelligence, surveillance, and reconnaissance (ISR), as well as strike missions.

In 2016, Rob Weiss, then Executive Vice President of Skunk Works, had said that a hypersonic demonstrator aircraft could be ready for a first flight by 2018. "We estimate it will cost less than $1 billion to develop, build and fly a demonstrator aircraft the size of an F-22," Marillyn Hewson, then Lockheed Martin's CEO, had added while speaking at the same event.

References to the SR-72 effort have also emerged more recently in relation to the U.S. Air Force's secretive Mayhem hypersonic air vehicle program, which you can read more about here.

The SR-72 has already been widely speculated to be the inspiration for Darkstar. Like conceptual artworks of the SR-72, the Darkstar jet that we’ve seen in previous trailers and in a Lady Gaga music video related to the film features an elongated, chined forward fuselage that extends back into a delta-like wing, mounted behind the fuselage’s midpoint. One difference compared to the SR-72 concepts is the Darkstar’s two inward-canted tail fins.

In addition, the cockpit configuration of the fictional aircraft notably features zero forward visibility, something that we've also seen on the real X-59 Quiet Supersonic Technology aircraft, or QueSST, which Skunk Works is building for NASA. Once again, the SR-72 would be unmanned, but a demonstrator of its high-speed technologies would be manned.

The music video below for Lady Gaga's "Hold My Hand," which is featured in the film, provides a good look at the fictional Darkstar design beginning at around 1:08 in the runtime.

The name is also a tell. Darkstar is already part of the Skunk Works legacy. The name was assigned to the short-lived RQ-3 Darkstar low-observable reconnaissance drone. That program was canceled in the late 1990s with its technologies migrating 'into the black' and influencing a number of programs. A similar concept eventually became operational in the guise of the RQ-170 Sentinel.

Separately, we also have now learned of indications that some kind of physical mock-up of Darkstar was produced for the movie, as well as the CGI versions that we’ve already seen.

In a Twitter post, Alex Hollings, the editor of the Sandboxx blog, recounts that producer Jerry Bruckheimer told him that the Darkstar “was actually designed with Skunk Works engineers.” The text is accompanied by a photo of a CGI Darkstar in a hangar, alongside Maverick’s iconic Kawasaki Ninja.

More sensationally, Hollings also writes that Bruckheimer claims the U.S. Navy told him “China reoriented a spy satellite to get pics of [Darkstar], thinking it was a real experimental aircraft.”

The claim that a Darkstar mock-up alerted Chinese intelligence agencies, prompting them to task their spy satellites to get a better look at it, seems a bit more fanciful, although it's possible. We don't really know what kind of mockup was used, although most of the imagery we have seen of Darkstar appears to be largely CGI rendered. Further, how the Navy knew the exact circumstances of Chinese surveillance of a major military installation, which happens daily as it is, seems a bit puzzling, although redirecting a high-resolution satellite to an area of interest could have been a circumstantial indication of this. The Navy then sharing such info with Bruckheimer also seems odd, but anything is possible. Hopefully, we can clear this up with the Navy and report more in the near future.

Nevertheless, it’s not unheard of for movie props of this kind to be sometimes almost too realistic.

Looking back in history, the cockpit mock-up of the B-52 strategic bomber used in Stanley Kubrick’s 1964 black comedy Dr. Strangelove or: How I Learned to Stop Worrying and Love the Bomb is widely reported to have led to consternation in the Air Force on account of its accuracy. Production designer Ken Adam, himself a former combat pilot, later recalled: “At some stage, we invited some American Air Force personnel to visit the set, and they went white because it was so accurate.”

There were similar concerns with early renderings of the Stealth Hawk helicopters used in Zero Dark Thirty.

Regardless, having Lockheed Martin involved in creating a fictional hypersonic aircraft concept shouldn’t be entirely surprising, if only from a public relations point of view. After all, despite the cloak of secrecy surrounding Skunk Works designs, the SR-72 concept has, in the past, been the subject of unusually public pitching by Lockheed and has fueled much speculation.

Maybe our best full look at Darkstar yet is made available by the Matchbox toy that was released far in advance of the movie's premiere due to COVID-19. It definitely has the classic look of high-speed aircraft concepts that have been floated over the years.

Admissions from Lockheed Martin that the company did indeed play a part in injecting realism into Top Gun 2 will no doubt help fuel anticipation about the new — and much-delayed — sequel. At the same time, the PR benefit will also surely be felt by Lockheed Martin as well as the U.S. Navy, the latter being a prime beneficiary of the original Top Gun movie. The F-35C is also featured in the film and Tom Cruise visited Lockheed Martin's F-35 factory in Dallas-Fort Worth during the early stages of the movie's production. But when it comes to defense contractors, Boeing stands the most to gain from the powerful Top Gun PR machine, with its F/A-18E/F Super Hornet clearly playing the starring role.

The big question that we have is if there is something else going on here? The Skunk Works was very hard to pin down regarding its involvement in Darkstar and there are rumors floating around that this aircraft maybe a little less fictional than we are made to believe, at least at this very moment.

We will stay on the story, but for now, enjoy a long-awaited quenching of your "need for speed."