A Russian attack on Ukraine rail lines highlighted the dangerous nature of the Austin-Blinken trip into a war zone. 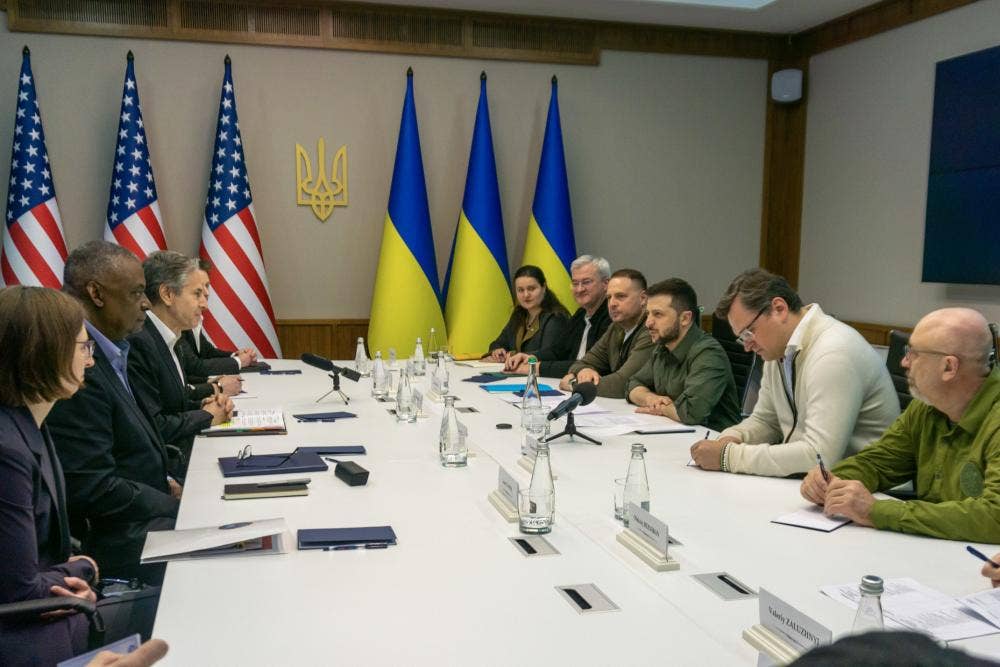 During his train trip through western Ukraine to visit its president in Kyiv, Defense Secretary Lloyd Austin retained all his authorities, a Pentagon spokesman told The War Zone.

“At no time did SECDEF relinquish any of his authorities or responsibilities,” Pentagon spokesman John Kirby said in an email to The War Zone Monday afternoon when asked if Austin temporarily waived his role in the National Command Authority (NCA) during the trip. The NCA exists, largely in part to facilitate the release of nuclear weapons. “At no time was Secretary Austin unable to execute his authorities in defense of the nation.”

As noted, the U.S. Secretary of Defense plays a role in any situation involving the use of nuclear arms. The exact nature of that role remains somewhat murky.

“Only the President has the authority to order the employment of nuclear weapons,” Hans M. Kristensen, Director of the Federation of American Scientists’ Nuclear Information Project and Associate Senior Fellow to SIPRI, said in an email to The War Zone. “Under ideal circumstances, the President would consult SECDEF about any use. While SECDEF is in the military chain of command, there is uncertainty and conflicting information about whether SECDEF is part of the NUCLEAR chain of command. The system was designed for speed, not consultation.”

The War Zone reported on the oddities of the current system and the controversy surrounding it recently. While the Secretary of Defense is very much a major part of the NCA, they cannot stop an order totally. We wrote the following:

Robust plans to maintain a so-called “continuity of government” in a crisis, something we at The War Zone have previously explored in depth, means that even if something happen to the president or other senior officials, this sole authority is always in the hands of a single individual. A mechanism known as the National Command Authority (NCA) does require the Secretary of Defense to confirm the order, but does not allow them to actively veto it. As such, the president can continue to fire and designate individuals to perform that function until someone approves the strike. The longer officials might attempt to dissuade the command in chief, the less time they would have to react to any incoming threats, though.

Above all else, the U.S. has developed and built trillions worth of communications and other command and control infrastructure over the last 70 years to support the president or a designated representative's ability to rapidly order a decisive nuclear strike before they themselves are destroyed. Other nuclear powers have created similar measures for the same reasons.

The established protocol essentially accepts the lack of any real check and balance beyond the president asking for and accepting the counsel from their closest advisers as necessary for the United States to offer a realistic threat of massive retaliation. At the same time, though, American military commanders are supposed to have the inherent right to refuse any orders they feel are unlawful. As already noted, the official U.S. military nuclear attack plan makes it clear that the strikes have to be in accordance with the Law of Armed Conflict, which requires any military action to be proportional to the hostile threat and to take all reasonable steps to avoid civilian casualties.

Regardless, the SECDEF's position within the NCA means it is critical they always remain capable of communicating with others in NCA, whether they be airborne on an E-4B, in the National Military Command Center or its twin at Raven Rock, or elsewhere in their daily movements. These communication networks, always at the ready, underpin America's strategic deterrent. The fact that this was possible, even in on a train chugging its way across battlefield Ukraine, is of special note.

The dangerous nature of the trip was highlighted by the bombardment of five railway stations in central and Western Ukraine that were hit by Russia within the span of an hour Monday morning, The Guardian reported.

Kirby declined to discuss the security protocols for the trip.

The New York Times described the voyage taken by Austin and Blinken as an 11-hour train ride from just inside Ukraine’s border with Poland to Kyiv.

Austin, Blinken and their party did not see very much of Ukraine as they traveled, according to ABC, citing a senior State Department official, who said shades on the windows blacked out much of the view.

Once in the capital, no longer under Russian siege, Blinken said there were signs that normal life was returning, ABC reported.

"We certainly saw people on the streets in Kyiv - evidence of that fact that the battle for Kyiv was won, and there is what looks from the surface at least to be normal life," he told reporters afterwards. "But that's in stark contrast to what's going on in other parts of Ukraine - in the south and the east - where the Russian brutality is doing horrific things to people every single day."

It is not unusual when cabinet members and other high-ranking officials travel to war zones or other dangerous areas that there would be an information blackout until after the party arrives at safe destination, something media organizations routinely agree to.

However, in this case, Ukraine’s President Zelensky publicized Austin and Blinken’s trip during a press conference he held Saturday in a Kyiv subway station.

“In an apparently unscripted remark Saturday afternoon during a news conference in the Ukrainian capital, Mr. Zelensky announced that Mr. Blinken and Mr. Austin would be arriving in Kyiv the next day,” the New York Times reported. “Shortly afterward, a senior defense official emerged from Mr. Austin’s quarters in the C-17’s cargo hold and somewhat sheepishly informed the three reporters accompanying the defense secretary that President Zelensky had blown the operation’s cover and the future of the trip was uncertain.”

The quarters that were mentioned were likely the 'Silver Bullet,' which you can read all about in this War Zone feature.

The trip, however, did take place, and Blinken told reporters that the meeting with Ukrainian officials was wide-ranging and lasted for three hours.

After he returned to Poland, Austin told reporters that the US believes Ukraine can win the war against Russia with “the right equipment and the right support,” according to CNN.

He also said that “we’re going to push as hard as we can as quickly as we can to get them what they need,” because the nature of the fight between Ukraine and Russia has evolved.

As Russia is now focusing on the eastern heartland of the Donbas, Ukraine’s military requirements have morphed because of it. Zelensky, he said, is now focused on more tanks, artillery and other munitions.

Blinken told Zelensky and his advisers that the U.S. would provide more than $300 million in foreign military financing and had approved a $165 million sale of ammunition, according to the State Department. These include large amounts of ammunition that is compatible with Soviet-era weapons systems, including the following:

Blinken also announced about $400 million in military financing for 15 allied and partner countries who have helped provide "critical military supplies" to Ukraine.

In addition, he told Zelensky that President Biden will nominate Bridget Brink, currently the U.S. Ambassador to Slovakia, to be the next U.S. Ambassador to Ukraine. He added that U.S. diplomats would soon return to Ukraine and that the U.S. is looking into returning them to Kyiv, where the embassy was closed in February.

“We had an opportunity to demonstrate directly our strong ongoing support for the Ukrainian government and the Ukrainian people,” Blinken told reporters. “This was, in our judgment, an important moment to be there, to have face-to-face conversations in detail.”

While all these developments are surely welcome to Ukraine, they are not surprising, but the fact that the Secretary of Defense and Secretary of State went to Kyiv at this time is somewhat remarkable. it is a testament to the security operation that got two officials, and the necessary communications gear required to keep them connected to critical command and control networks, to Kyiv for the meeting.

The operation remains shrouded in secrecy and considering the troubling possibilities that could have occurred, the contingency planning must have been extreme. What if the train was attacked? How would the wounded be evacuated and the VVIPs secured? How would they be exfiltrated from the country? What force protection was there to make sure such sensitive personnel like the U.S. Secretary of Defense, would not fall into enemy hands, even by complete happenstance? What about if the train broke down? The quick reaction forces on the border had to be elaborate, to say the least, during the window of vulnerability when the two men were in the country.

It's also worth noting that this visit came at a time when Russia was making increasingly bellicose threats over arms shipments to Ukraine from the west, with Russian Foreign Minister Lavrov stating just today that, "NATO, in essence, is engaged in a war with Russia through a proxy and is arming that proxy. War means war."

We will let you know as we find out more about this historic visit.