The good news for Ukraine is that sanctions are hurting Russia’s arms suppliers. The bad news is the effects aren’t immediate, for the most part. 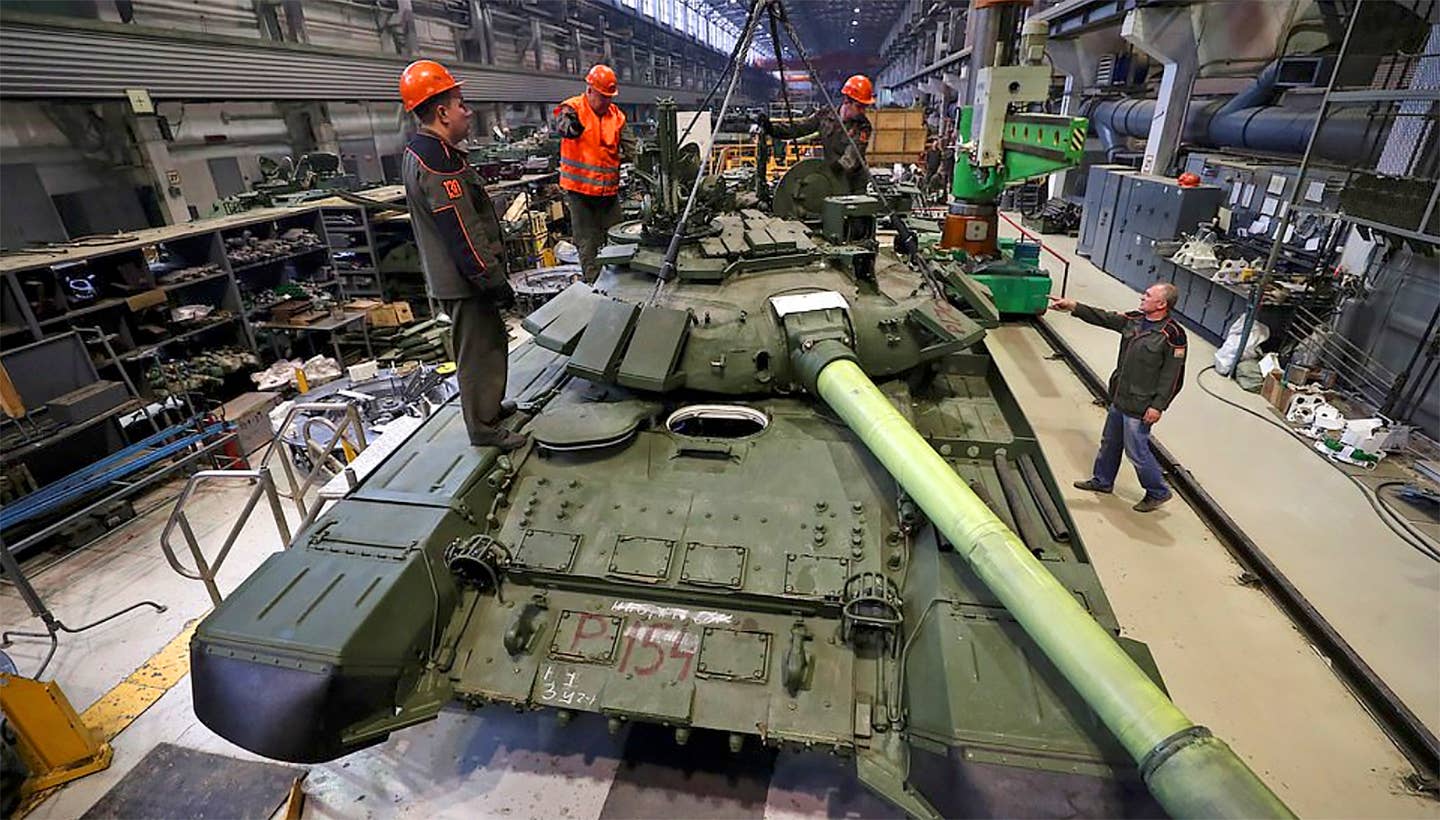 A senior U.S. defense official confirmed to The War Zone Monday morning something Ukrainian officials have been saying for a while now about Russia's weapons supplies. Not only is Russia suffering tremendous losses on the battlefield, but its ability to resupply its forces has taken a beating thanks to punishing economic sanctions imposed by the U.S. and its allies.

Since the start of its war on Ukraine Feb. 24, Russia has lost thousands of major weapons systems, like tanks, armored personnel carriers, air defense systems, helicopters, fixed-wing aircraft, ships and many other weapons that have been destroyed, damaged or captured, according to Oryxspioenkop, an independent open-source investigator.

“There has been an effect on Putin's ability to restock and resupply, particularly in the realm of components to some of his systems and his precision-guided munitions,” the official said in response to a question from The War Zone. “They've already faced an issue in terms of replenishing their inventory because of components to some of those systems. And that's already had a practical effect on Putin.”

One example, according to Russian media, is the next-generation airborne early warning and control (AEW&C) aircraft, the A-100 Premier. Its progress has been stalled due to delays in the delivery of electronic components like microchips, thanks to sanctions imposed on Russia.

You can read more about that here.

The senior U.S. defense official, speaking on the condition of anonymity to discuss sensitive issues, would not elaborate further on what systems are affected by sanction-imposed supply chain issues and how badly. However, the sanctions are exacerbating previous Russian supply chain issues, the official said.

“We know that they're working through their replenishment efforts with their own defense contracting process and that they have concerns about how fast and how much they can ramp up their own domestic production of defense articles. And the sanctions are having an effect on their ability to do that.”

Among other things, Ukraine claims tank and air defense system resupply efforts are being affected by sanctions.

“They have huge problems with military infrastructure," Ukraine Brig. Gen. Kyrylo Budanov, head of his nation’s Defense Intelligence Agency, or GUR, said on his agency’s Telegram channel recently. In a synopsis of his statements in Ukrainian, the Telegram channel said the problems resulted in the “freezing of the air defense production horde.” The synopsis added that Budanov said many companies have already closed and laid-off workers.

Russia is exhausting its stocks of missiles, according to the April 16 “War Bulletin” produced by the Ukrainian Embassy in Washington, D.C. and shared with The War Zone. “Its military-industrial complex has to work 24/7 to replenish them.”

That issue of the War Bulletin claimed “over 20 Russian military enterprises were forced to suspend their activities in whole or in part due to shortage of parts and components, as well as rising prices due to sanctions.” Those companies include the research and production enterprise Vimpel, which produces aircraft missiles, and the only Russian company that makes tanks, Uralvagonzavod, the largest such firm in the world.

The GUR stated that Uralvagonzavod, which makes Russia’s T-72 main battle tank among others, “is facing rising interest rates on loans, rising prices on materials and components (including armored steel),” according to the Institute for the Study of War. ISW is a non-partisan, non-profit, public policy research organization focusing on military affairs.

We've reached out to the State Department for more information but have not heard back yet.

John Hardie, a research manager and research analyst for the Foundation for Defense of Democracies, told The War Zone he is skeptical of claims that sanctions will have a serious, near-term impact on Russia's war efforts.

"Western sanctions have and no doubt will continue to undermine Russia’s defense and related industries, for example by hindering Russian missile production and satellite programs," he said. "But I am skeptical about claims that sanctions affecting Russia’s defense industrial base will meaningfully limit Russia’s ability to prosecute the war, at least in the near term."

He cited the example of Russian tanks.

"The Ukrainian General Staff claimed on March 21 that a shortage of foreign-made components forced Russian UralVagonZavod (UVZ), which makes tanks and railway cars, among other things, to suspend operations," said Hardie. "It’s unclear to me whether sanctions have in fact slowed or stopped UVZ production and, if so, whether it’s affected its production of military vehicles or just civilian contracts."

"For one thing, building tanks obviously takes time, so any additional tanks built by UVZ might not make it onto the battlefield, depending on how long the war lasts," he said.

Previous sanctions imposed on Russia after it invaded Ukraine in 2014 have not proven bulletproof.

Disclose, for instance, reported that between 2015 and 2020, France “issued 76 export licenses to Russia for military equipment worth a total of 152 million euros.”

Disclose reported that while the U.S. and allies pressured French president François Hollande to cancel a planned sale of two Mistral-class amphibious assault ships to Russia in 2015, “successive French governments under first President Hollande and then President Macron were to take advantage of a loophole in the European embargo: it was not retroactive.”

As a result, Disclose reported, “any contracts signed before the decision to impose an embargo could continue.

On top of that, the equipment was being exported under guarantee, in other words the French manufacturers were committed to carrying out any repairs for several years after delivery, as long as France did not suspend their export licence.”

The French military, however, rejected the notion that it violated the 2014 EU sanctions.

“When it comes to military equipment exports, France strictly complies with its international commitments, including the Arms Trade Treaty and the EU Common Position, French MOD spokesman Hervé Grandjean said in a March 14 tweet thread. “The execution of certain contracts signed before 2014 was allowed under the so-called "grandfather clause". A contract concluded before the annexation of Crimea can be fulfilled, and deliveries of equipment can be pursued.”

The 2021 report to parliament, Grandjean added, "shows that since 2014 the amount of equipment deliveries to Russia has been constantly declining, approaching zero in 2020. This is the result of the successive closures of these contracts."

There have been no new contracts with Russia since 2014, according to Grandjean.

"No deliveries have been made to Russia since the start of the #WarUkraine," he tweeted.

Still, some French components have been found on Russian equipment captured in Ukraine.

The end of these grandfathered deals under the 2022 sanctions would also impact Russia's ability to produce weapons.

France isn't the only nation to have its components found in Russian weapons.

A Russian drone shot down in 2017, for instance, was found to contain parts from a half-dozen Western companies, according to the Washington Post, citing a report from the Conflict Armament Research organization.

"The engine came from a German company that supplies model-airplane hobbyists," the newspaper reported on Feb. 11. "Computer chips for navigation and wireless communication were made by U.S. suppliers. A British company provided a motion-sensing chip. Other parts came from Switzerland and South Korea."

The defense sector isn’t the only segment of the Russian economy suffering under the sanctions, ISW said. The sanctions are “continuing to damage Russia’s already-fragile economy,” ISW noted in a recent situation report. Standard & Poor “announced on April 8 that Russia fell into selective debt default after Russia offered its required payment in rubles, not dollars.”

Meanwhile, the British Center for Economics and Business Research estimates that Russia will suffer 14% of lost Gross Domestic Product output over a two-year period compared to a scenario in which it did not invade Ukraine.
Though the U.S. and Ukraine say that the current sanctions are affecting Russia’s ability to restock its war materiel, its military is still devastating Ukrainian cities like Mariupol. And Russia, which the Pentagon believes is preparing for a major new attack in the Donbas, has recently poured an additional 11 battalion tactical groups into Ukraine’s east and south, the senior defense official told reporters Monday morning.

So while the good news for Ukraine is that the sanctions appear to be hitting Putin’s war machine, even Kyiv admits that it won’t have an instantaneous carryover on the battlefield.

“Taking into account Russian stocks of ammo and armor as well as old fashion style of war conducting we could not expect positive sanctions effects on war efforts in the short term,” a defense expert in Ukraine told The War Zone Monday afternoon. “It might happen in mid and long one.”

Putting the Kremlin under fiscal pressure will also make it so recapitalizing the Russian military will be less feasible even after its invasion of Ukraine ends or drastically deescalates.

Though time will tell how the post-Feb. 24 sanctions against Russia will play out on the battlefield, one thing seems likely.

With the new round of sanctions far more stringent, future Russian weaponry will have to rely on its own domestic production capabilities.