Ukraine’s Russian-occupied Snake Island in the western Black Sea has emerged recently as a key flashpoint in the conflict. 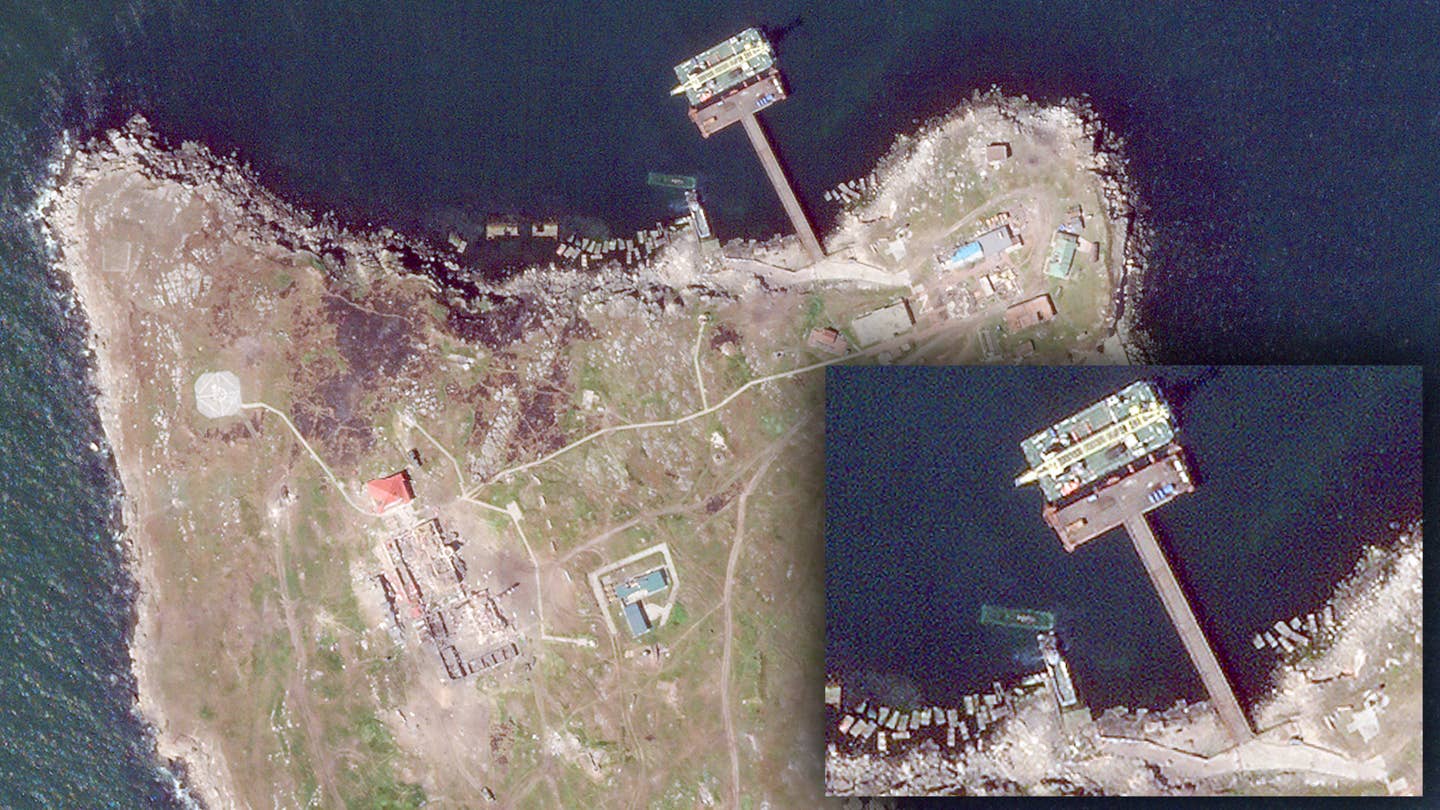 New satellite imagery of Ukraine's Zmiinyi Island, or Snake Island, which Russia currently occupies, shows what appears to be a Russian Navy Project 02690 self-propelled crane barge moored at its small dock. This comes around a week after Ukrainian TB2 armed drones sunk one of Russia's Project 11770 Serna class landing craft that looked to be preparing to offload a Tor-series surface-to-missile system onto the island. After that, a daring raid by Ukrainian Su-27 Flanker combat jets significant damage to facilities ashore.

The crane barge in the image, which The War Zone obtained from Planet Labs and was taken on May 12, is almost certainly SPK-46150. That particular example is assigned to Russia's Black Sea Fleet, which is currently headquartered in Sevastopol on the Russian-occupied Crimean Peninsula.

Why SPK-46150 is now docked at Snake Island is unclear, but it could well be linked to the sunken Serna class landing craft. The wreck of that vessel is also visible in the Planet Labs image resting underwater in the shallows near a boat ramp close to the main dock.

The plan could be to use the crane barge to recover what's left of the landing craft and remove it as a potential obstacle, or at least retrieve the Tor system. At the same time, another Serna is present in the image at the boat ramp, appearing to have sailed right over its sunken cousin. A third example of one of these landing craft is seen sailing just north of the island in the imagery, as well.

It's also not clear exactly when SPK-46150 may have left Sevastopol for Snake Island. It's some 175 miles from the Russian naval base in Crimea to Snake Island and the crane barge has a top speed of 6 knots, or around 7 miles per hour. This means that it would have taken the vessel at least around a day to make the journey at top speed without interruptions.

SPK-46150 had previously been observed via online ship tracking software leaving Sevastopol amid reports last week that Ukrainian forces had damaged or sunk a Russian warship, possibly the Admiral Grigorovich class frigate Admiral Makarov, in the western Black Sea. Whether or not Makarov was even attacked remains entirely unconfirmed and there have been indications since then that it has been continuing to operate in the region as normal. Experts and observers had also noted at the time that the crane barge was unlikely to be part of any initial search and rescue operation.

Whatever the reason for sending SPK-46150 to Snake Island, it's hard not to see it as at least a somewhat risky move. The Ukrainian military, which has been reportedly receiving near-real-time intelligence of various kinds from the U.S. government, including on Russian Navy ship movements, is likely to already know it's there and it would be an attractive target.

U.S. intelligence on Russian naval dispositions was reportedly a key enabler of the Ukrainian missile strike on the cruiser Moskva, which directly contributed to its sinking in the western Black Sea in April. The loss of that ship, the flagship of the Russian Navy's Black Sea Fleet, was seen as a major embarrassment and a significant loss of both air defense and command and control capabilities. The removal of that vessel from the overall operational equation may have contributed to a subsequent increase in Ukrainian air activity in the region, including over and around Snake Island.

"Fighting continues at Zmiinyi Island, also known as Snake Island, with Russia repeatedly trying to reinforce its exposed garrison located there," the U.K. Ministry of Defense said in a public assessment of the situation that it released yesterday. "Ukraine has successfully struck Russian air defenses and resupply vessels with Bayraktar drones. Russia’s resupply vessels have minimum protection in the western Black Sea, following the Russian Navy’s retreat to Crimea after the loss of the Moskva."

Ukraine's Turkish-made TB2 drones have already been marauding in the area on and off for more than a week now, attacking various targets, including the aforementioned Serna class landing craft. A TB2 may have also been involved in finding and fixing the Moskva ahead of the missile strike on the ship last month.

Fixed-wing aircraft have been involved in strikes on Snake Island, too, as you read more about here. The aftermath of the Su-27 strikes this past weekend is plainly visible in the new satellite image from Planet Labs.

New rumors that a Russian naval vessel had suffered damage after an unexplained fire broke out while it was sailing in the western Black Sea emerged just today, prompting additional speculation that the vessel might have been attacked. The ship, identified only as a Project 23120 Elbrus class logistics support vessel, was purportedly heading toward Snake Island. The Russian Navy currently has only two examples of the Elbrus class, at least one of which, the Vsevolod Bobrov, is assigned to the Black Sea Fleet and only arrived in the region in January.

At the same time, the presence of SPK-46150 at Snake Island, as well as the two Serna landing craft, strongly indicates that this outpost in the western Black Sea is still under Russian control. This is despite completely unconfirmed reports that Ukrainian forces might have been actively trying to recapture it recently. The Russian military's claims to have rebuffed a Ukrainian operation to retake the island this past weekend, and that they shot down multiple Ukrainian aircraft and sank an enemy Centaur class assault craft in the process, remain entirely unsubstantiated.

Snake Island occupies a highly strategic position in the region and has been under Russian control since very early in the conflict. The island achieved significant notoriety as a result of a now legendary incident that occurred soon after Moscow's all-out invasion kicked off in which Ukrainian Border Guards responded to a demand from the crew of the Moskva to surrender with the defiant retort "Russian warship, go fuck yourself!"

Even in the face of persistent Ukrainian air attacks, Russian forces seem unlikely to abandon the island quickly, unless it becomes completely untenable for them to maintain their presence there. The Russian military could use it as a key anti-access/area denial asset if it can better secure its position. It is somewhat curious that Russia has not already been able to establish a robust air defense screen around the island despite having controlled it for months now.

Russian long-range air defense systems, like the S-400s, would be able to target aircraft flying in airspace over western Ukraine from Snake Island, as well as present a threat to other countries in the region, like NATO member Romania. In addition to serving as a base for anti-ship missiles, the island could provide a launch point for missile strikes on targets inside Ukraine, as well. Russian forces have already employed ground-based anti-ship cruise missiles in secondary land-attack roles in the course of the conflict so far, too.

All told, much about the exact situation on and around Snake Island, and current Ukrainian and Russian operational objectives relating to it, remains unclear. However, the arrival of SPK-46150, together with the recent fighting and other activity there, only underscores that it has become one of the conflict's more significant flashpoints.