Russia’s invasion of Ukraine has prompted Finland to seek NATO membership and Sweden may well follow. 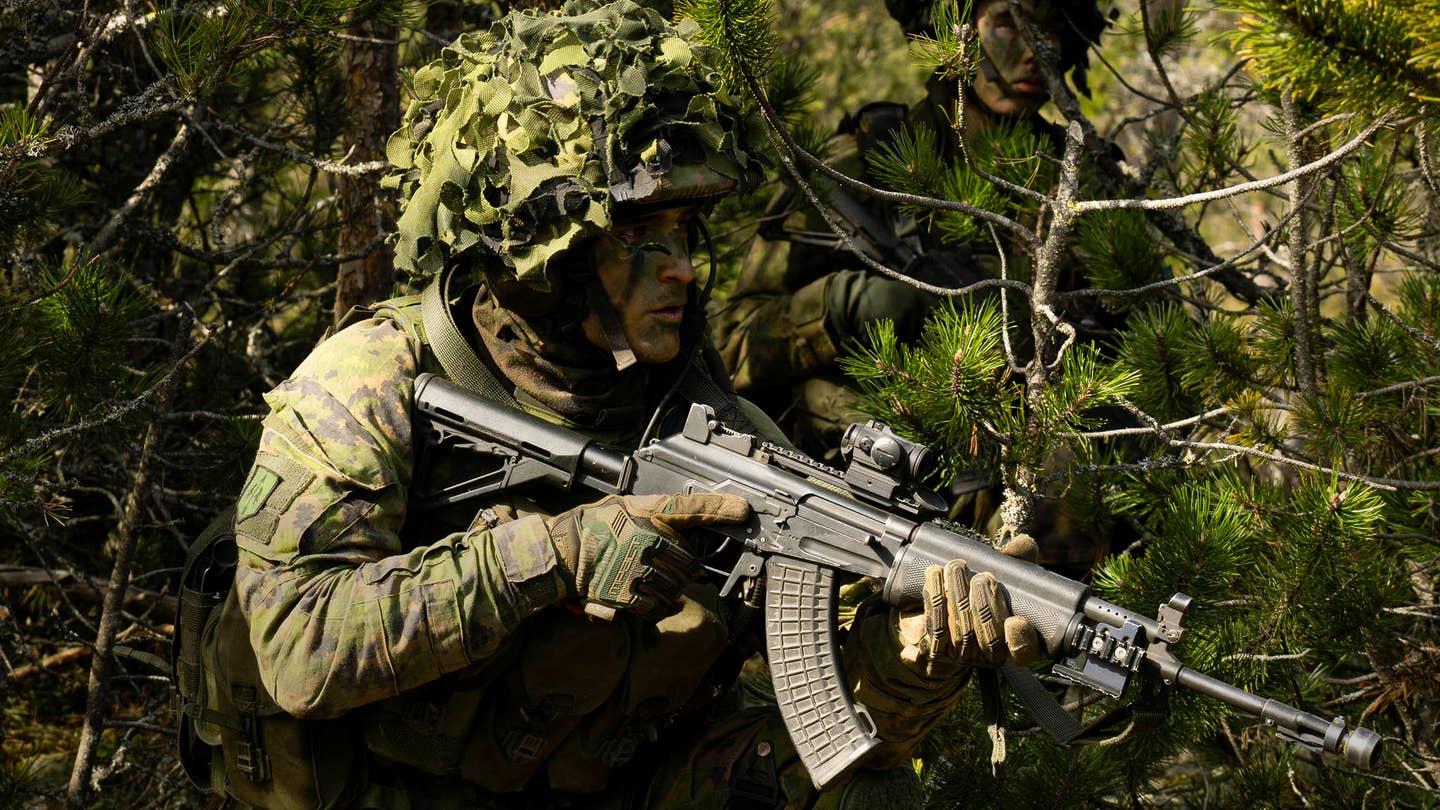 Russia has threatened to respond to Finland’s decision, announced today, that it will seek NATO membership, an aspiration that has been prompted, to a significant degree, by Moscow’s invasion of Ukraine, now in its 79th day. Kremlin officials have not stated explicitly what kind of reaction could follow, although a spokesman said Finnish accession to NATO posed a direct threat to Russia. Meanwhile, Dmitry Medvedev, the deputy chairman of Russia’s security council, today issued a warning of a “full-fledged nuclear war” if NATO continues “pumping weapons into Ukraine,” the timing of which may well be related.

Finland announced earlier today that it would apply to join the alliance “without delay,” turning its back on a policy of neutrality that has existed since the end of World War II. It would also mark a hugely significant shift in the European security landscape, with Finland sharing a border with Russia that’s over 800 miles long. The result will see NATO’s land borders with Russia more than doubled and it’s notable, too, that Russia’s second-largest city, St. Petersburg, is less than 100 miles from the Finnish frontier. Finland also has a substantial maritime border on the Baltic Sea and on the Gulf of Finland, both of which are highly strategic waterways for Russia, vital for the movement of naval and commercial shipping.

“Finland must apply for NATO membership without delay,” President Sauli Niinisto and Prime Minister Sanna Marin said in a joint statement. “We hope that the national steps still needed to make this decision will be taken rapidly within the next few days.”

The next phase is expected to see the proposal approved by the Finnish government and parliament.

NATO Secretary-General Jens Stoltenberg promised that Finland would be “warmly welcomed” into the alliance after a “smooth and swift” accession process. Stoltenberg also said that Helsinki joining the alliance would not only enhance that country’s security but also boost that of the alliance overall.

When asked if Finland’s accession to NATO posed a direct threat to Russia, Kremlin spokesman Dmitry Peskov said: “Definitely. NATO expansion does not make our continent more stable and secure."

“Finland joined the unfriendly steps taken by the European Union towards our country. This cannot fail to arouse our regret and is a reason for corresponding symmetrical responses on our side,” Peskov added, without going into further detail, although he noted that the response “will depend on how this [NATO] expansion process plays out, the extent to which military infrastructure moves closer to our borders.”

Meanwhile, the Russian Foreign Ministry stated that the country would take “retaliatory steps, both of a military-technical and other nature, in order to stop threats to its national security arising.”

“Helsinki must be aware of the responsibility and consequences of such a move,” the ministry added. One option appears to be economic in nature, with unconfirmed reports from Finland that Russia may cut off its gas supply to Finland imminently, in retaliation.

In the past, Moscow has warned of “serious consequences” if Finland or Sweden join NATO and said it would reinforce its land, naval, and air forces in the Baltic region.

In the past, Russian officials have also suggested that additional nuclear-armed missiles could be stationed in the Baltic region as a response to NATO expansion. Russia already has nuclear-capable missiles deployed in its Kaliningrad exclave and has apparently upgraded its nuclear weapons storage facilities there in recent years.

A starker warning came today from Dmitry Medvedev, a close advisor to President Vladimir Putin. Although he did not reference Finland specifically, Medvedev did raise the specter of a “full-fledged nuclear war,” which he claimed is made more likely by NATO’s arming of Ukraine and training of Ukrainian troops, and exercises by alliance countries near Russian borders.

Due to the country’s history and geographic location, Finland’s defense posture is shaped to a significant degree by the potential threat posed by Russia. As well as having fought three wars against the Soviet Union after Finland declared independence in 1917, the country is also located close to key Russian military infrastructure, including the Northern Fleet and its ballistic missile submarines, and other assets, on the Kola Peninsula.

While having been outside NATO, Finland has, nonetheless, increasingly cooperated with the alliance, as well as non-aligned neighbor Sweden, in recent years. This policy was ramped up in the wake of Russia’s annexation of Crimea in 2014 and now includes regular exercises that bring together forces from Finland, NATO, and Sweden, and which focus on potential contingencies in the wider Nordic region.

Finland, which has a population of only five and a half million on a territory that’s the fifth largest in the European Union, relies heavily on compulsory conscription to ensure its defense forces are able to mobilize rapidly in wartime. This posture is designed to ensure a wartime strength across the armed forces of 280,000 personnel, with an emphasis on defensive land warfare operations to slow down a potential Russian invasion.

While land forces include mechanized and Jaeger brigades, as well as armored regiments, special operations forces, and rotary-wing units, the navy and air forces are smaller but nonetheless capable. The Finnish Navy focuses on missile craft and mine warfare, while the Finnish Air Force is spearheaded by three squadrons of F/A-18C/D Hornet fighters. Last year, Helsinki unveiled plans to replace the Hornets with 64 F-35A stealth fighters, under the HX program, starting in 2025.

By joining NATO, the well-trained Finnish Armed Forces will help address longstanding concerns about the quality and quantity of equipment available to them, with only limited defense funding having been made available in recent years. As it stands, the HX program, worth around $11.3 billion, dominates the defense budget and will do for years to come. The other major modernization effort is Squadron 2020, the planned acquisition of four new Pohjanmaa class multirole corvettes to replace seven earlier warships.

F-35A and F/A-18C jet fighters operating in Finland during the flight-test phase of the HX competition:

As a NATO member, Finland would be expected to not only train more regularly with its new allies but also receive more regular deployments and rotations of alliance forces. NATO already provides Finland with certain critical capabilities that it doesn’t itself possess, like strategic airlift and aerial refueling, and access to these would only increase. At the same time, membership will be a two-way street, with Helsinki having new obligations to the alliance, in terms of contributing various high-readiness forces, being prepared to deploy in support of other alliance members, and likely air policing commitments, too.

In the short term, it’s likely that NATO forces would be stationed in Finland as part of an expanded defensive posture during the ratification period, expected to last one year before the country is declared a full member of the alliance and comes under the mutual protection terms outlined in Article 5. The governments of the United States, United Kingdom, and Germany have all offered their support in the interim should Finland come under attack, while unnamed diplomats told Reuters that among options for the ratification period are an increased NATO troop presence in the Nordic region, more military exercises and naval patrols in the Baltic, and possible rotation of U.S. and British forces through bases in Finland.

During the interim period, Finland would be required to demonstrate that it met the requirements of full membership, while each of the governments of the 30 other NATO nations approved the application.

As for Finland, officials in Helsinki have meanwhile blamed the Kremlin’s increasingly belligerent stance, culminating in the invasion of Ukraine, as the key driver behind the country’s NATO ambitions.

When asked about the potential of the move to provoke Russia, Finland’s President Niinisto said: “My response would be that [Putin] caused this. Look at the mirror.”

It is, of course, ironic that ahead of its invasion of Ukraine, the Kremlin used its concerns over NATO expansion along or close to its borders as one of the justifications for what it termed a “special military operation.” Now, as well as Finland, other non-NATO countries in the region are looking to either join the alliance or otherwise bolster their armed forces to thwart potential Russian aggression. At the same time, many of these countries, Finland included, have been sending arms and other materiel to support Ukraine’s fight against the Russian invaders.

It's been widely predicted that Finland’s neighbor and close military partner, Sweden, will follow Helsinki’s lead in applying for NATO membership. Currently, the parliament in Stockholm is conducting a security policy review, due for completion tomorrow and which is expected to outline the benefits of joining the alliance. A majority in the Swedish parliament already backs NATO membership and the majority of public opinion recently seems to have moved in favor of it too.

Should Finland and Sweden both join NATO, Russia would be presented with a Baltic Sea almost entirely surrounded by alliance members, a fact that the Lithuanian defense minister has already brought attention to. It would not only be easier to move NATO reinforcements around the region by sea, but Kaliningrad would become even further isolated. Indeed, the Baltic would become something akin to a ‘NATO lake’ on which Russia maintains a handful of ports.

With this in mind, the Russian Armed Forces’ slow progress in a Ukrainian campaign that seemingly lacks clear objectives, and the unified response from much of the international community against this aggression, including sanctions and a pariah status for Russia, might just be the start of Moscow’s woes. Ultimately, Finland’s decision may well be the latest piece of evidence of how the Kremlin’s aggressive adventure is significantly reshaping the European security environment.