A STOL MQ-9 has the potential to provide persistent eyes in the sky for big deck amphibious assault ships, carriers, and Marines operating from austere locations. 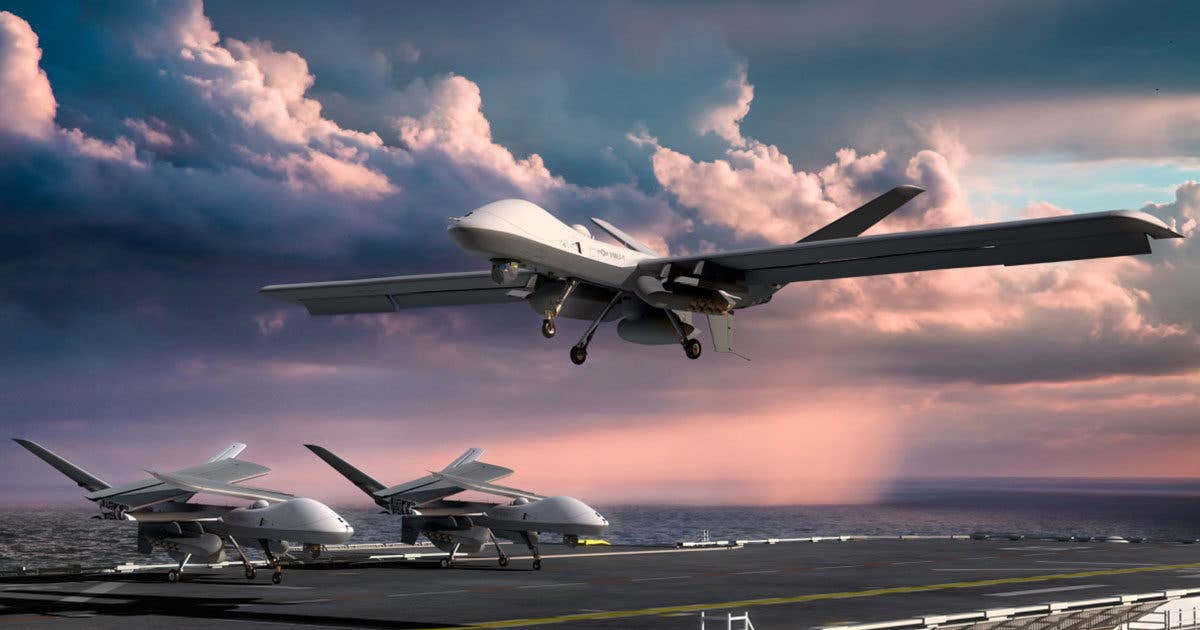 General Atomics has unveiled plans for a short-takeoff-and-landing, or STOL, version of the MQ-9B Reaper drone, which the Marine Corps could deploy from big-deck amphibious assault ships to provide persistent surveillance, anti-submarine, and strike capabilities at sea. With the kit installed, the new MQ-9 configuration could perform a host of other potential missions for any ships with a large enough flight deck to host it.

The MQ-9B STOL configuration will consist of an optional wing and tail kit that can be installed in less than a day while the core aircraft and its sub-systems remain the same, according to General Atomics Aeronautical Systems, Inc. (GA-ASI). Operators can perform the modification in a hangar or on a flight line, delivering new capability to an existing aircraft. It is unclear whether GA-ASI will offer new drones in the STOL configuration, but it would stand to reason that the capability would be made available to new customers, as well.

“Imagine taking the hardtop off your Jeep,” said GA-ASI president David Alexander. “You lift it off, stow it in your garage and now you’ve got an open vehicle. If it rains, you put the hardtop back on. We’re the same. Take a standard MQ-9B, put the STOL kit on, and then go fly.”

General Atomics announced that they were developing the STOL Reaper on May 10, complete with an animated video of a Marine Corps-marked MQ-9 taking off from the deck of what appears to be the USS Makin Island, or LHD 8, judging by the number painted on the island. The MQ-9 then lands and folds its wings.

"STOL means we can take this incredibly capable, long-endurance aircraft and get into and out of more airfields in more places," Alexander said in a statement on GA-ASI's website. "If you need to have these aircraft switch up where they’re operating – either because you don’t have a long, conventional airfield, or because you don’t want an adversary to know where one might land after a mission – you have numerous options about where you can operate."

The company said it is “taking on this revolutionary engineering effort to meet an evolving operational environment in contested expeditionary environments.”

"Picture something like an amphibious assault ship such as the USS America," Alexander said. "Our wing set folds up so that MQ-9B STOL could park on the deck, or in the hangar bay, just like any other naval aircraft. When it’s time to launch, you start up the aircraft, unfold the wings and take off over the bow just like any other aircraft, without the need for ship-launch aids. No catapult needed."

GA-ASI believes the U.S. Navy and Marine Corps will take note of this innovation as it opens the door to persistent and long-range intelligence, surveillance, and reconnaissance (ISR) operations launched anywhere in the world a Navy big-deck ship can travel or even small, remote airstrips. The Marine Corps in its 2022 Aviation Plan also expressed a desire for an airborne early warning radar for Reaper.

General Atomics in April announced it had tested the Seaspray 7500E V2 active electronically-scanned array (AESA) multi-function radar on an MQ-9, which has air and surface search and track capabilities, and might fit that bill to a degree.

"By extending the surveillance umbrella of the amphibious ships, we can also host kinetic capabilities that would act as a first line of defense for Navy ships," Alexander said. "They don’t have anything like this right now. So you could use it to support your forces in the littoral, on the beach, or blue water operations."

While the Marine Corps is a fledgling operator of the MQ-9B, if it's interested, there are additional Air Force MQ-9s available. The USAF wants to stop buying the Reaper and has plans to transfer 100 of its 300 MQ-9s to one or more undisclosed U.S. government agencies. Marine Corps Commandant Gen. David Berger has also drawn a path for his service to assume some role in the anti-submarine warfare mission, which the MQ-9 could be able to perform if launched from ships or coastal areas and islands.

Large, slow, unstealthy drones are often discounted as unsurvivable in contested environments where enemy air defenses or manned aircraft can shoot them down relatively easily. The Reaper has demonstrated some self-defense capabilities against other aircraft, most notably scoring an air-to-air kill with an AIM-9X sidewinder missile. Although the test was against a target drone, the kill was a first for the platform. More importantly, podded electronic warfare and self-defense countermeasures systems have also been tested on the MQ-9, giving it enhanced survivability and situational awareness in semi-contested environments.

STOL capability already flew on a derivative of the GA-ASI Gray Eagle Extended Range platform in 2021 under the company's Mojave program. The Mojave drone took STOL and austere operations to another level, though, and is capable of rough field operations. Now, the company is set to begin developing a more 'balanced' STOL capability on the larger, more-capable MQ-9B. The retrofit kits will be available for both the SkyGuardian and SeaGuardian models of the drone, as well.

The company specifically mentioned the MQ-9B STOL for use on amphibious assault ships, which usually sail loaded with a number of Marine AV-8B Harrier jump jets or the F-35B Lightning IIs, both of which are capable of short takeoff and vertical landing (STOVL). The America class amphibious assault ships are just under 844 feet long, requiring aircraft flying from them to either take off in a very short space or be truly vertical-lift aircraft, such as helicopters. Even a Nimitz class aircraft carrier, with its topside length of 1,100 feet is too short for a conventional takeoff, requiring all of its non-rotary-wing embarked aircraft to use catapults to get airborne. The MQ-9 STOL could change that, bringing long-endurance fixed-wing efficiency to ships that have never been able to field such a capability.

A Reaper could be an effective wide-area surveillance platform, extending the eyes of a ship over large areas of the ocean for long periods of time. It would be just as effective as a networking node, tying together strike groups, and the nearby battlespace as a whole, beyond-line-of-sight without relying on satellites. It also could be employed as a sub-hunter as the MQ-9 is capable of carrying and deploying sonobuoys from a wing-mounted pneumatic launching pod. Datalinks would relay the information gathered by the sonobuoys back to the ship or to manned sub-hunting helicopters for analysis and exploitation.

The MQ-9B STOL would bring even more flexibility than the purpose-built Mojave, although the Mojave would accelerate in other areas, such as close air support. Mojave can accommodate up to 16 AGM-114 Hellfire missiles or other ordnance, including forward-firing weapons like the Dillon Aero M134D-H minigun, as well as sensors and other payloads. The aircraft can haul up to 3,600 pounds for a variety of missions.

Regardless, GA-ASI now claims they have two flattop-capable designs.

The newest version of the MQ-9 is powered by the Rolls-Royce M250 turboshaft engine. It has a high-resolution electro-optical/infrared (EO/IR) nose-mounted MTS-B sensor and can also carry an Eagle Eye long-range synthetic aperture radar with moving-target indicator capability, signals intelligence, and communications relay packages, as well as a whole slew of other capabilities via bolt-on pods. Air-to-ground weapons range from JDAMs to Hellfire missiles to laser-guided bombs.

When the aircraft is “clean,” meaning it is carrying no external stores, the latest iterations can stay aloft for as long as 35 hours, and even long, under certain conditions.

Both the Navy and Marine Corps are interested in developing remotely piloted or optionally manned aircraft for at-sea missions like ASW and surveillance. The Marines’ MUX program did not come to fruition, but aircraft manufacturers see a demand signal for persistent unmanned overwatch when sailing in contested waters.

The Navy is still weighing its options for maritime strike systems through an analysis of alternatives for what might replace the MH-60R and MQ-8C Fire Scout, though the MQ-9 is not likely to fill that role. Still, the Navy’s desired platform has many of the same mission profiles the STOL version of the Reaper can fulfill. They include ISR, surface warfare and sub-hunting, electronic warfare, search and rescue, and networking functions.

The war in Ukraine and other recent conflicts have proven the effectiveness of remotely piloted aircraft in the maritime and littoral environment. From land-based airfields, the TB2 Bayraktar drone has damaged several Russian navy vessels in recent weeks. A TB3 is in development specifically for the Turkish Navy’s Anadolu STOVL carrier.

The MQ-9 is far larger and more capable than those Turkish-built systems, but their development underscores the operational requirement for unmanned aircraft to fly alongside crewed jets and helicopters when ships are at sea. Especially considering the breadth of the Pacific Ocean, where the U.S. is most likely to face off against China, the need for a persistent set of eyes looking as far and wide as possible is becoming a tactical necessity.

For its part, the Marine Corps has focused a portion of its new force structure plan on operating from ships at sea and in the littorals in what it calls Expeditionary Advanced Base Operations, or EABO. The service is particularly interested in the kinds of capabilities that a STOL-capable larger drone like the MQ-9 could provide. While ships may be the focus of General Atomics' video, a STOL-capable Reaper would be as equally useful at austere bases where access to large airstrips is not assured. The same surveillance, anti-submarine, and strike missions they could provide from a ship could be useful when it comes to defending remote islands in the Pacific, for instance.

Finally, the possibility of exports is a very real thing, especially in the maritime environment. While few countries have traditional aircraft carriers, many have 'big-deck' amphibious assault ships. The addition of the MQ-9 STOL could give those vessels, and the troops they deploy, a massive increase in capabilities. This includes everything from close air support to airborne early warning missions. Some of these ships even have ski-jump ramps but no fixed-wing aircraft to take advantage of them. Once again, a ship-borne Reaper could be a very attractive, low-risk addition.

General Atomics continues to expand the capabilities and potential applications of the MQ-9, recognizing the U.S. military will not always fight with permissive skies overhead as it did in Afghanistan and Iraq. Rolling out a STOL-capable Reaper certainly broadens the drone's appeal to navies operating on the open seas or Marine forces operating forward in remote areas with only small airstrips at their disposal.