Germany’s Rheinmetall has unveiled its KF51 Panther that could disrupt Franco-German plans for a new main battle tank.

With tank warfare very much back on the agenda as the war in Ukraine rages on, Germany’s Rheinmetall company today unveiled its latest main battle tank, the KF51 Panther, armed with a huge 130mm caliber main gun. This private-venture design is aimed as a long-term successor to the widely used Leopard 2 within the German Army but may well attract interest from other European countries looking at the future of their own armored forces as they reconfigure to face the threat of an increasingly belligerent Russia.

The KF51 Panther, the name of which recalls the legendary Nazi German tank of World War II, was presented today at the Eurosatory land defense exhibition in Paris, by Rheinmetall CEO Armin Papperger.

So far, the company has released very little in the way of information about the new MBT and its specifications. The tank reportedly weighs around 65 tons. This makes it lighter than the Leopard 2, which, in its latest 2A7V form, tips the scales at a little over 70 tons, according to the German Army. Powered by the same 1,475-horsepower diesel engine, that should help to ensure the Panther has improved mobility compared to its predecessor. Overall, the Panther is lighter than a lot of current Western MBTs, notably later versions of the U.S.-made M1 Abrams, with an overall weight, in combat, of over 70 tons. It is perhaps only a little surprising that the designers did not opt for a more modern propulsion arrangement, such as a hybrid powerplant, but the chosen solution should make it quicker and easier to develop and produce.

The new MBT also has its firepower boosted, thanks to a smoothbore 130mm caliber main gun, compared to the 120mm weapon on the Leopard 2. This reflects a broader interest in moving to increased-caliber tank armament and the gun itself is something that Rheinmetall has been working on for some time now. According to Papperger, the 130mm gun is “more than 50 percent more effective” than the Leopard 2’s gun and will offer “much longer range.” It will fire both kinetic-energy saboted projectiles and programmable explosive ammunition.

Other armament is planned to include a 12.7mm coaxial machine gun and an optional remote-controlled weapon station. There will also be provisions for launchers for HERO 120 loitering ammunition, drones, and undisclosed missiles, perhaps of a type that would provide localized air defense since there is no mention, so far, of an anti-aircraft machine gun.

In terms of protection, there are few details of what the Panther offers, although Rheinmetall has asserted that the crew will be better protected than in the Leopard 2 and will benefit from active, reactive, and passive protection technologies. The Rheinmetall StrikeShield active protection system will be fitted to defend against threats such as anti-tank weapons and suicide drones. Originally known as APS-Gen3, StrikeShield was the first system of its kind to pass a stringent independent safety evaluation. That should have helped allay potential customers’ fears that these types of defenses might pose significant risks to friendly troops and innocent bystanders.

While the Leopard 2 has a crew of four, this is reduced to three in the Panther (commander, gunner, and driver) aided by the introduction of an autoloader to feed ammunition to the main gun. An additional fourth crew member can be included if required, for example, an additional specialist or platoon commander.

The crew will be provided with digital networking capabilities to be more effective on the battlefield and each soldier will also have access to data from all sensors, weapons, powerpack, and other subsystems, which can be called up as required. With each crew member able to take over tasks from the others, the tank also lends itself to be configured with unmanned turrets in the future, Rheinmetall says, and perhaps even a version that’s entirely unmanned.

Overall efficiency will also be enhanced thanks to an open-architecture system known as NATO Generic Vehicle Architecture (NGVA), allowing rapid integration of sensors and weapons and improving general interoperability with other platforms.

It is somewhat ironic that the Panther is making its debut in France since the fortunes of the MBT could well influence the future of tank forces in both France and Germany.

Under the Main Ground Combat System, or MGCS, the governments in Paris and Berlin are investing around $1.6 billion in development costs to create a new Franco-German MBT that will eventually replace the French Army’s Leclerc and German Leopard 2s. The MGCS brings together Nexter of France with the other giant of the German land systems industry, Krauss-Maffei Wegmann (KMW), within a partnership known as KNDS. Rheinmetall is also involved in MGCS. Reports in the German media suggest that the company is unhappy with its status in the program, in which KNDS is said to be the lead partner.

With that in mind, the Panther could well be Rheinmetall’s response to its dissatisfaction with the path that MGCS is taking and it’s significant that it’s not only striking out on its own but also that it has developed its new MBT so rapidly. That should serve as a signal to both the German government and also to other countries potentially now looking to overhaul their tank fleets, with the security situation in Eastern Europe worse than it has been for many years.

If Rheinmetall can bring to market an MBT that offers similar firepower to the MGCS, but do so quickly, it might be able to secure both domestic orders and interest from export customers. The Leopard 2 has been a huge export success, especially in Europe, and Rheinmetall should be well placed to capitalize on that. The Asia Pacific region, too, is another possible market for MBTs. Interestingly, however, the company appears to be aiming primarily at the German market, initially at least, perhaps with the hope that Berlin might be more receptive to an all-German replacement for its Leopard 2s. That would clearly undermine the Franco-German MGCS.

It’s notable that at least one other major defense project, the Future Combat Air System (FCAS), in which France and Germany play the leading roles, is currently struggling. Recent reports suggest that the airpower system, which will include a manned fighter jet as its centerpiece, has been delayed. Once expected to enter service in 2040, the fighter is not likely to be operational until 2050, according to Dassault CEO Éric Trappier. In the meantime, Germany has announced plans to buy F-35A stealth fighters, a move that has led to dismay among French officials.

The timing for a Leopard 2 successor for the German Army is perhaps fortuitous. As Berlin responds to the conflict in Ukraine by embarking on military modernization, a “special fund” from the 2022 budget amounting to over $112 billion has been earmarked for buying new equipment. At the same time, German Chancellor Olaf Scholz has underlined his promise of increasing defense spending to 2% of gross domestic product, in line with NATO aspirations.

With tank warfare a prominent feature of the fighting in Ukraine, so far, it’s possible that buying new MBTs sooner rather than later could be on the agenda. Here the Panther would appear to have an advantage over the MGCS, which was due to arrive in service beginning in 2035. While a technology demonstrator for the MGCS program, the Enhanced Main Battle Tank, combining Leclerc and Leopard 2 components, was unveiled in 2018, progress since then has been slow.

Outside of Germany, meanwhile, other nations closer to Russia’s borders are also looking at bolstering their land forces, in particular, to help dissuade potential aggression from Moscow. Reports in the German media suggest that at least one country in Eastern Europe has expressed interest in the new MBT. For some countries in this part of the world, especially some NATO members, the need for new armor has proven even more urgent. Poland, which at one time was suggested as a possible MGCS customer, instead opted for 250 U.S.-made M1A2SEPv3 Abrams tanks and is now looking to accelerate deliveries after delivering surplus Soviet-era T-72s to Ukraine.

The war in Ukraine has already led to a flurry of tank transfers and deliveries around Europe, as countries provide Kyiv with surplus armor from their own stocks. While Germany has been notably slow off the mark when it comes to delivering secondhand MBTs to Ukraine, the reconfiguration of tank fleets elsewhere in Europe could mean that they require back-filling. For instance, the Czech Republic is receiving 15 surplus Leopard 2A4 tanks from Germany to replace T-72s that it donated to Ukraine, and it might follow up with orders for 50 additional Leopard 2A7+ tanks. Potentially, other countries will also take the opportunity to buy new tanks, with the Panther being one possible candidate.

The conflict in Ukraine has prompted a renewed discussion about the future of the tank in general. While heavy armor has played a major part in its traditional breakthrough role, the vulnerability of MBTs to various weapons has been highlighted too. In some ways, the KF51 Panther seems to be trying to address those realities from various different angles. Overall, it should be lighter and more agile than current MBTs, carry a bigger main gun, and have the ability to provide stand-in surveillance and strike with loitering munitions.

All in all, the KF51 Panther arrives on the scene at a very interesting time in tank warfare, and ultimately, it could help shape the future of MBT forces both in Germany and elsewhere. 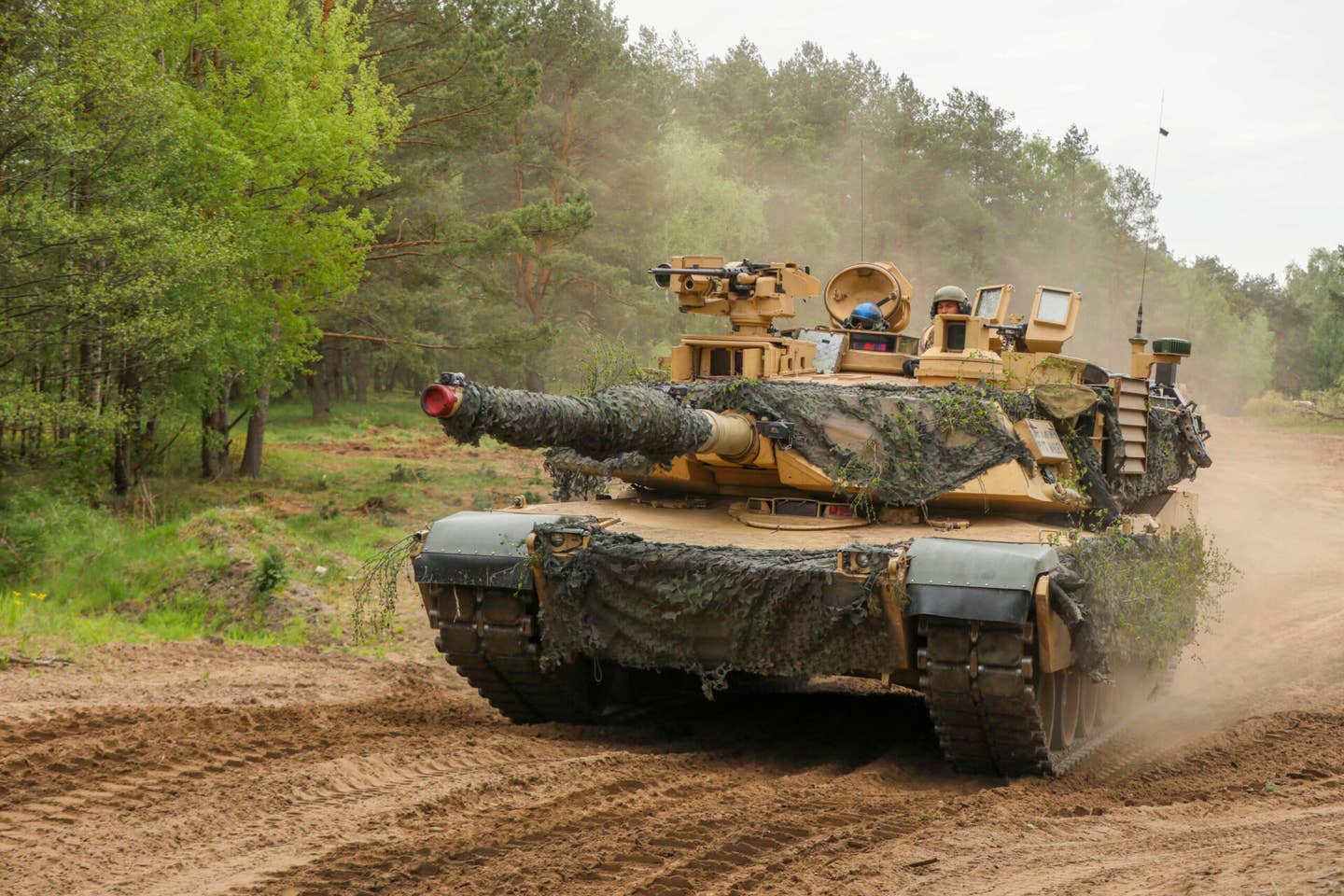 Poland wants modern replacements for the 240 older tanks it has donated to Ukraine, but won’t currently get U.S. M1s until 2025. 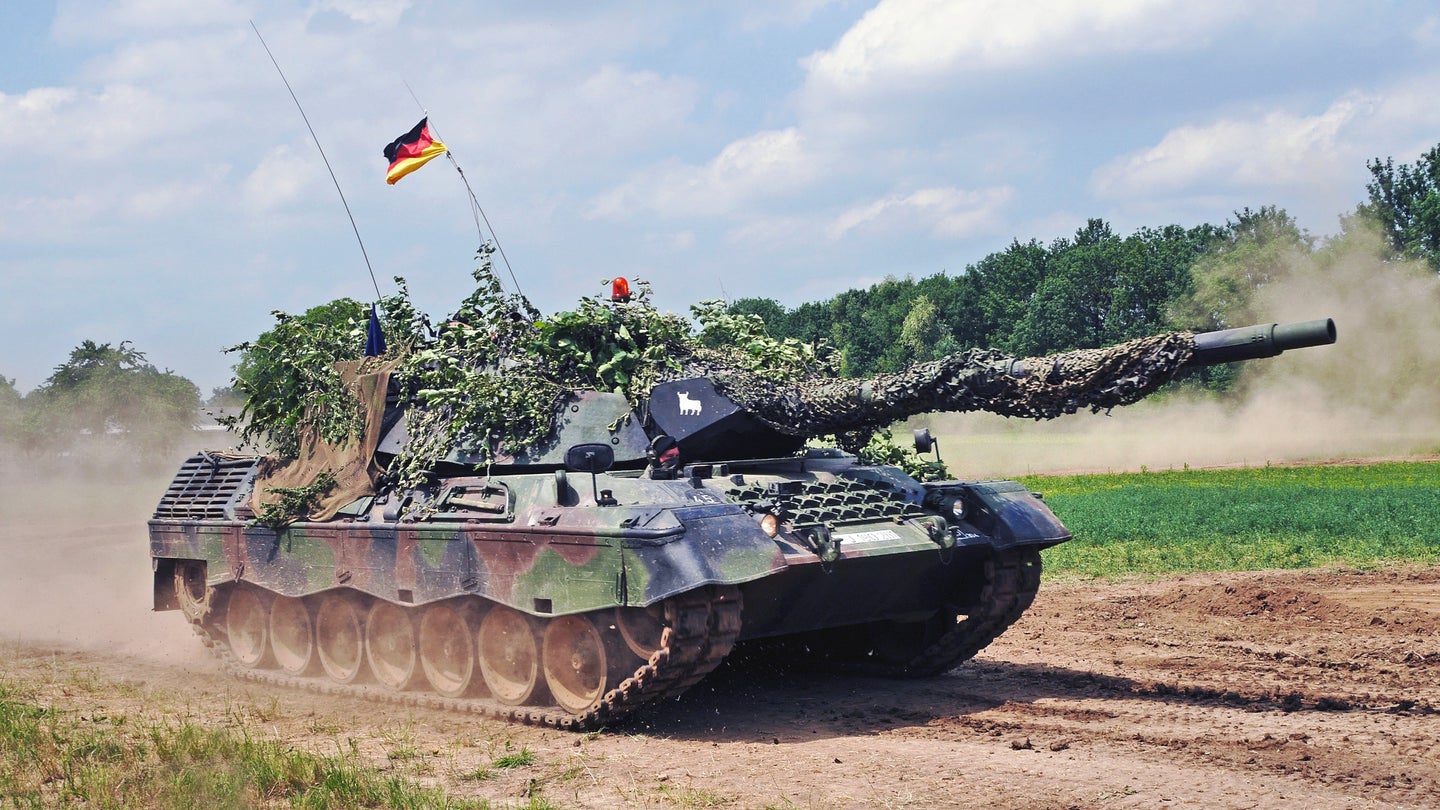 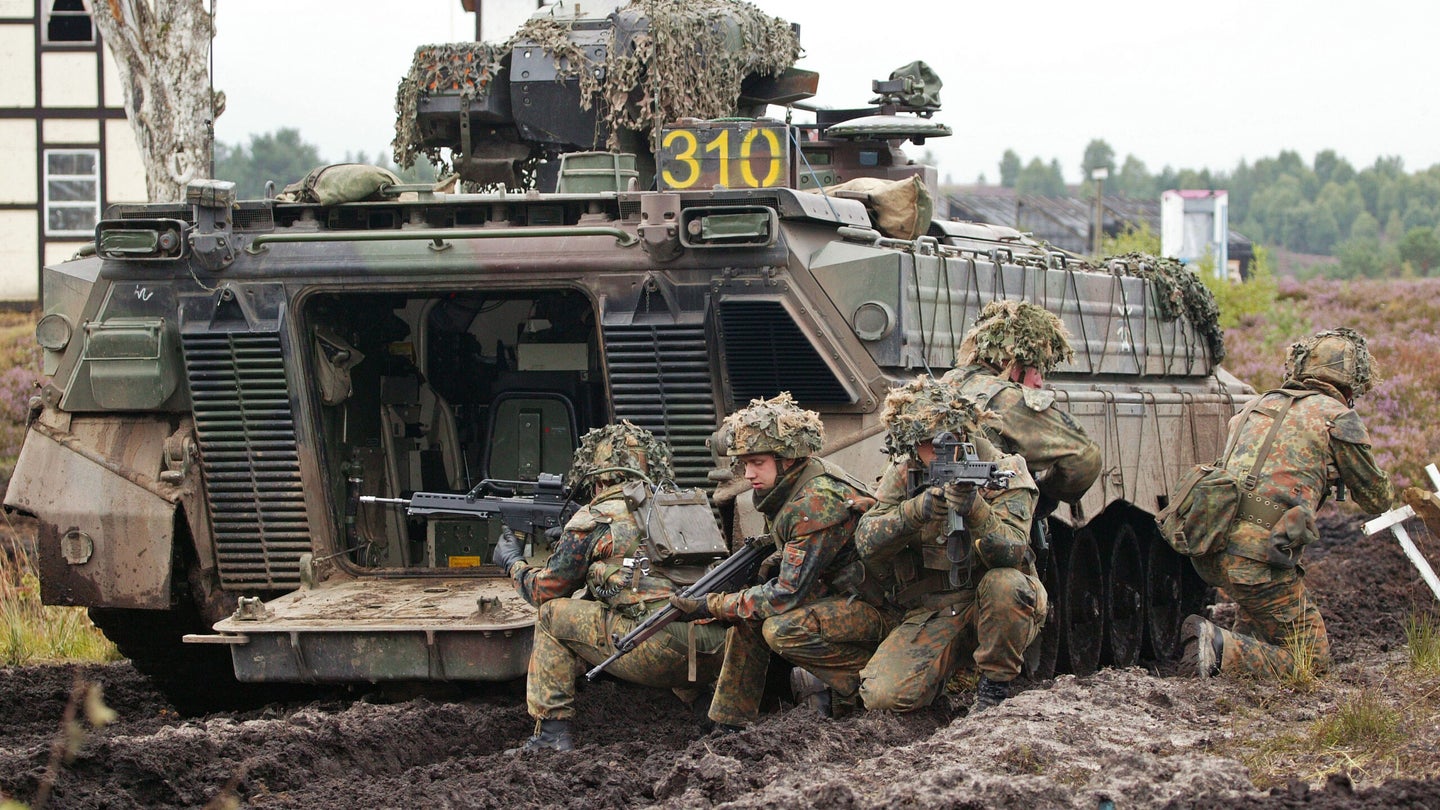 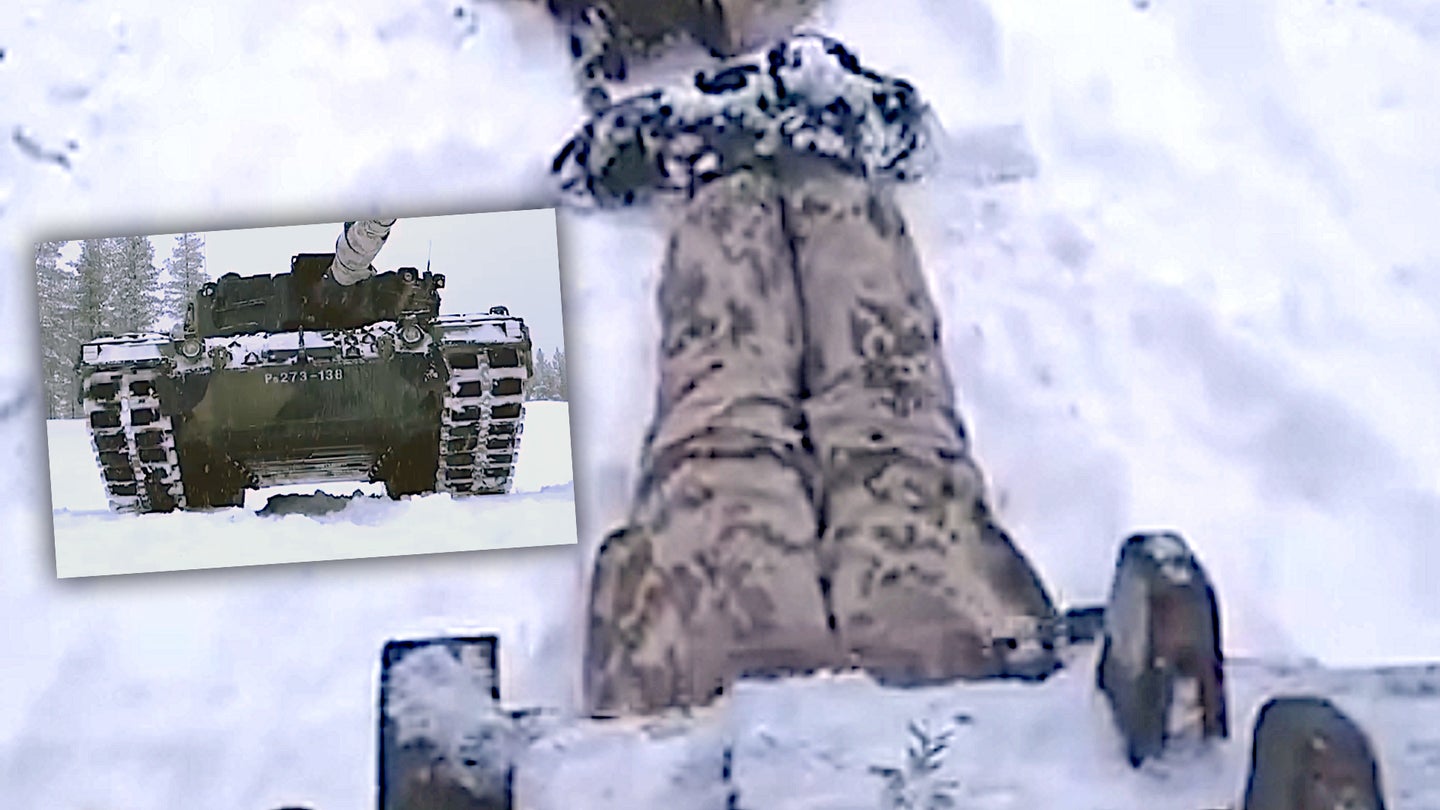 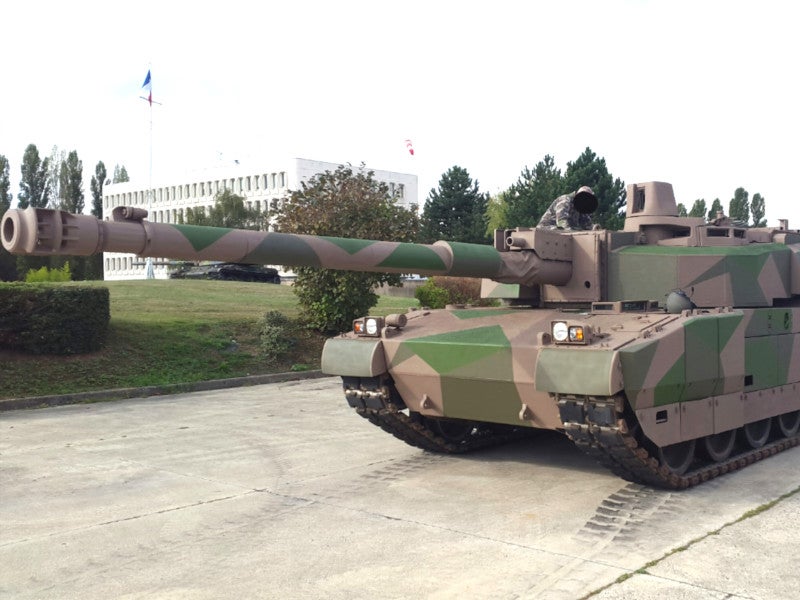