Navy Plans To Rid Itself Of Cruisers In Just Five Years

The Navy is looking to retire all of its remaining Ticonderoga class cruisers within just half a decade.

The Navy wants to retire its aging fleet of 22 Ticonderoga class guided missile cruisers over the next five years and replace them with Flight III Arleigh Burke class destroyers.

The controversial decision, announced Wednesday when the Navy unveiled its latest 30-year shipbuilding plan, raises questions not only about the use of taxpayer dollars, but also about how to replace the large amount of vertical launch system cells and air defense command and control capabilities that made the ships so valuable. Currently, they are the only ships that are capable of acting as a central operations center for the strike group's air warfare commander.

The ships are designed primarily to act as key air defense nodes for aircraft carrier strike groups and other surface battle groups. They are equipped with the Aegis combat system, the first operational ships to feature it, and a powerful AN/SPY-1A/B multifunction radar. Each one has 122 Mk 41 Vertical Launch System (VLS) cells capable of accommodating various missiles, including SM-2 and SM-6 surface-to-air missiles and SM-3 anti-ballistic missile interceptors, as well as RGM-109 Tomahawk cruise missiles.

The problem is that Ticonderoga class guided missile cruisers are on average at least 35 years old and deteriorating, the Navy says. It is known that cracking and other structural issues have become a problem for the class, as well as other obsolescence and supportability factors. However, plans to replace it with a new class of cruiser were previously scrapped. You can read more about that here.

“There would be little return on investment in maintaining these ships given their poor reliability, affordability, and lethality,” the Navy offered as a rationale for ridding itself of the entire class.

Their upside, according to the Navy, was that the ships “have a large vertical launch capacity.”

But “the substantial cost of repairing the poor material condition of these ships due to their age, and ongoing concerns with overall legacy sensor, and [hull, mechanical and electrical] system reliability, outweighs the potential warfighting contributions of these platforms over their limited remaining service life.”

Cruiser modernization costs “have grown to 90 to 200 percent more than the initial estimates,” the Navy said in its budget book, released Monday.

Getting rid of the ships “enables the Navy to prioritize investment in higher priority capability and capacity.”

The budget book estimates that the Navy will save $30.5 million in Fiscal Year 2023 alone and $703.5 million over the next five fiscal years.

The Navy has already spent hundreds of millions of dollars to keep the fleet afloat. One of the ships for instance - the USS Vicksburg (CG 69) - is currently undergoing a modernization program costing at least  $175 million on a contract that was awarded just two years ago. Yet the 31-year-old vessel is one of five Ticonderoga class guided-missile cruisers the Navy is planning to dispose of in Fiscal Year 2023. The others are the USS San Jacinto (CG 56), the USS Lake Champlain (CG 57), the USS Bunker Hill (CG 52 and the USS Mobile Bay (CG 53).

Navy officials are well aware of concerns about the Ticonderoga divestment plans, which have to be approved by Congress.

“Congress may not be happy,” Vice Adm. Scott Conn, Deputy Chief of Naval Operations for Warfighting Requirements and Capabilities, said Wednesday in a call with reporters to discuss the new 30-year shipbuilding plan. “They may push back. There is concern on the waterfront. Having been down and visited Vicksburg last week, and walked that ship, they got a lot of stuff done. And they have a long way to go. So it's just part of our ‘get-real’ perspective in the Navy in terms of assessing where we are, and if the investments we continue to make on these ships is going to give us a return from a warfighting capability perspective.”

And just because the Navy put the ships on its list of those to be retired doesn’t mean that will necessarily happen, Conn acknowledged.

Asked about the Vicksburg, Conn said no decisions so far are irreversible.

“Nothing is carved in stone, by the hand of God, he said. “It's all on paper. It's future decisions. There are people that can change it.”

This isn’t the first time the Navy has wanted to purge the Ticonderoga fleet. But Congress has repeatedly put the kibosh on those efforts, in part because the highly specialized air warfare battle management command center found on each vessel, a capability that other ships cannot quickly be adapted to provide, and their large number of VLS cells. Then again, the Navy has poured millions into overhauls of these ships because it has had to, by law. Congress has repeatedly blocked them from being decommissioned.

Some see the capabilities provided by the Ticos as essential going forward as the U.S. will have to contend with growing threats from China and Russia.

"As Russia invades Ukraine, positioning overwhelming military force in and around Ukraine on land and in the Black Sea, China continues to menace Taiwan and other countries in the region," according to the budget book. "Both countries continue advancements in weapons technology, and China, in particular, is building all domain capabilities at a capacity to challenge U.S. influence in the Pacific. America needs a flexible, forward-deployed, engaged fleet that keeps the seas open and free, generates credible deterrence at sea, and provides quick response options for U.S. leadership."

The Navy’s last 30-year shipbuilding plan, for Fiscal Year 2020, had a far more optimistic view of the Ticonderoga class, calling for the ships to retired between Fiscal Year 2021 and Fiscal Year 2038, according to the Congressional Research Service. The new plan calls for the whole class to be gone by Fiscal Year 2027.

All told, 19 of the 22 cruisers are slated to be held in a Out of Commission in Reserve status, which could potentially enable them to be returned to service if required, but this is very expensive to do, as the longer they sit the more upgrades are needed to make them relevant at all.

The other two - the San Jacinto and the Lake Champlain - will be held for "unspecified purposes as Logistics Support Assets."

The Navy wants to replace the Ticonderoga class with the Flight III Arleigh Burke class guided-missile destroyer (DDG 51) class. There are plans to procure two as part of the $27.9 billion battle force ship procurement plan in the Fiscal Year 2023 budget proposal.

The Navy is "better supported by investing in warfighting readiness, capabilities or capacity other than those of these legacy platforms," according to the budget book. "CGs have been the Navy’s premier air defense command and control platforms for over three decades and this mission is now transitioning to Flight III DDGs."

Unlike the Ticos, which were designed to provide command and control for air defense of an entire battle group, it remains unclear if the Flight IIIs were created with that in mind. From what we understand, they were not, but the Navy may well have a plan to address this already, possibly through improvements to the Aegis combat system and broader networking capabilities. They could also possibly attempt to tweak the Flight III design to accommodate this, but from all accounts, the current Flight III configuration is 'maxed out.'

The first vessel to be built under the Flight III configuration, the future Jack H. Lucas (DDG 125), was launched at Huntington Ingalls Industries, June 4, 2021, according to the Navy.

That Flight III variant upgrade is centered on the AN/SPY-6(V)1 Air and Missile Defense Radar and incorporates upgrades to the electrical power and cooling capacity plus additional associated changes to provide enhanced warfighting capability to the fleet, according to the Navy in a media release at the time.

The Fiscal Year 2023 budget requests $5 billion for two Flight III Arleigh Burke class destroyers - plus funds for components, materials and parts needed in the future - for a planned Fiscal Year 2024 through Fiscal Year 2027 multiyear procurement, according to the Navy’s most recent budget book. These ships will also be equipped with the AN/SLQ-32 Surface Electronic Warfare Improvement Program (SEWIP) Block III.

The plan also includes examining whether to increase the life of aging Nimitz-class aircraft carriers to keep the flattop fleet up to legally mandated levels. You can read more about that here.

So don't count out the Vicksburg or her long-serving sisterships just yet. 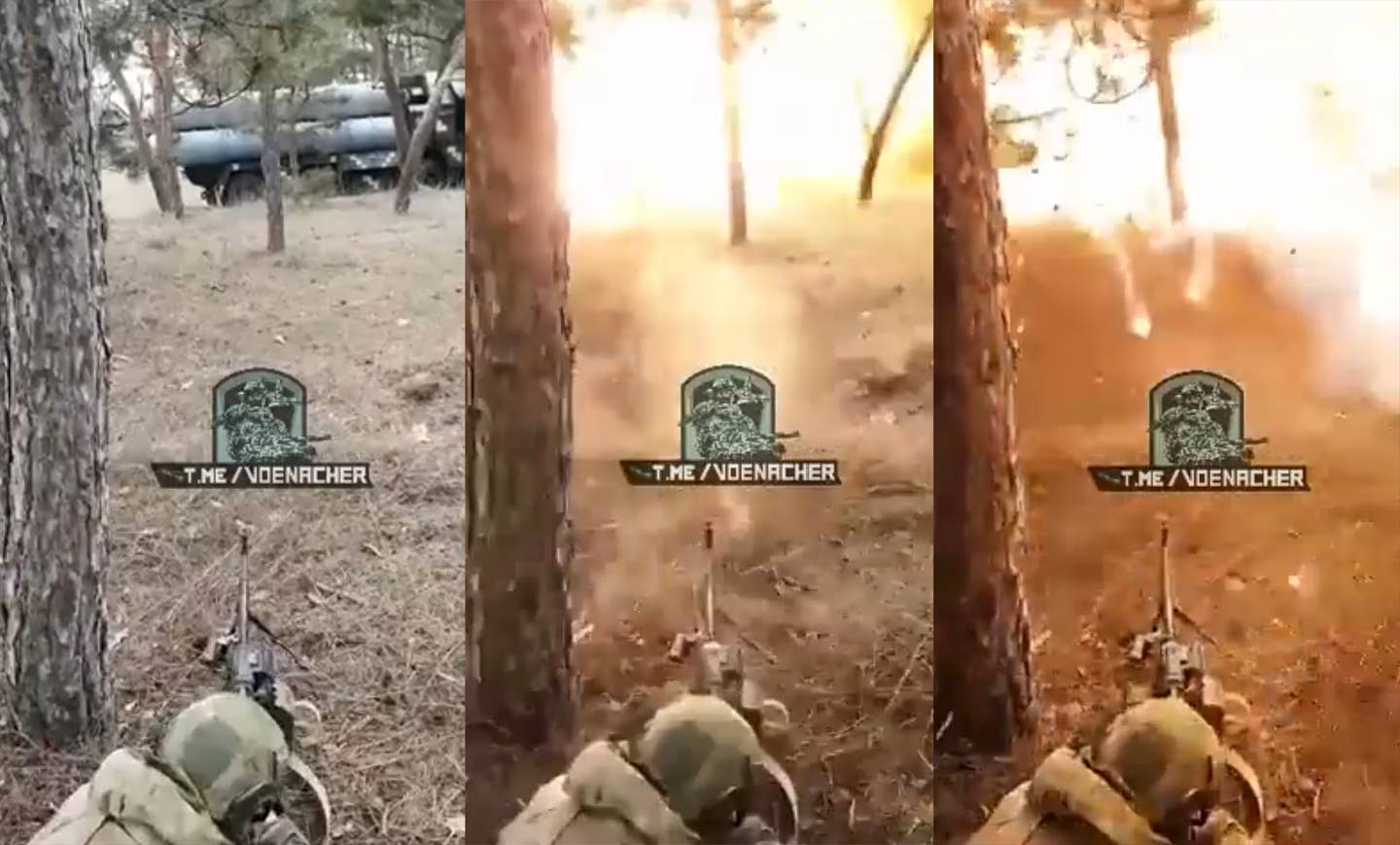