This appears to be our first glimpse of China’s anti-ship ballistic missile tailored to be fired from its most advanced warships. 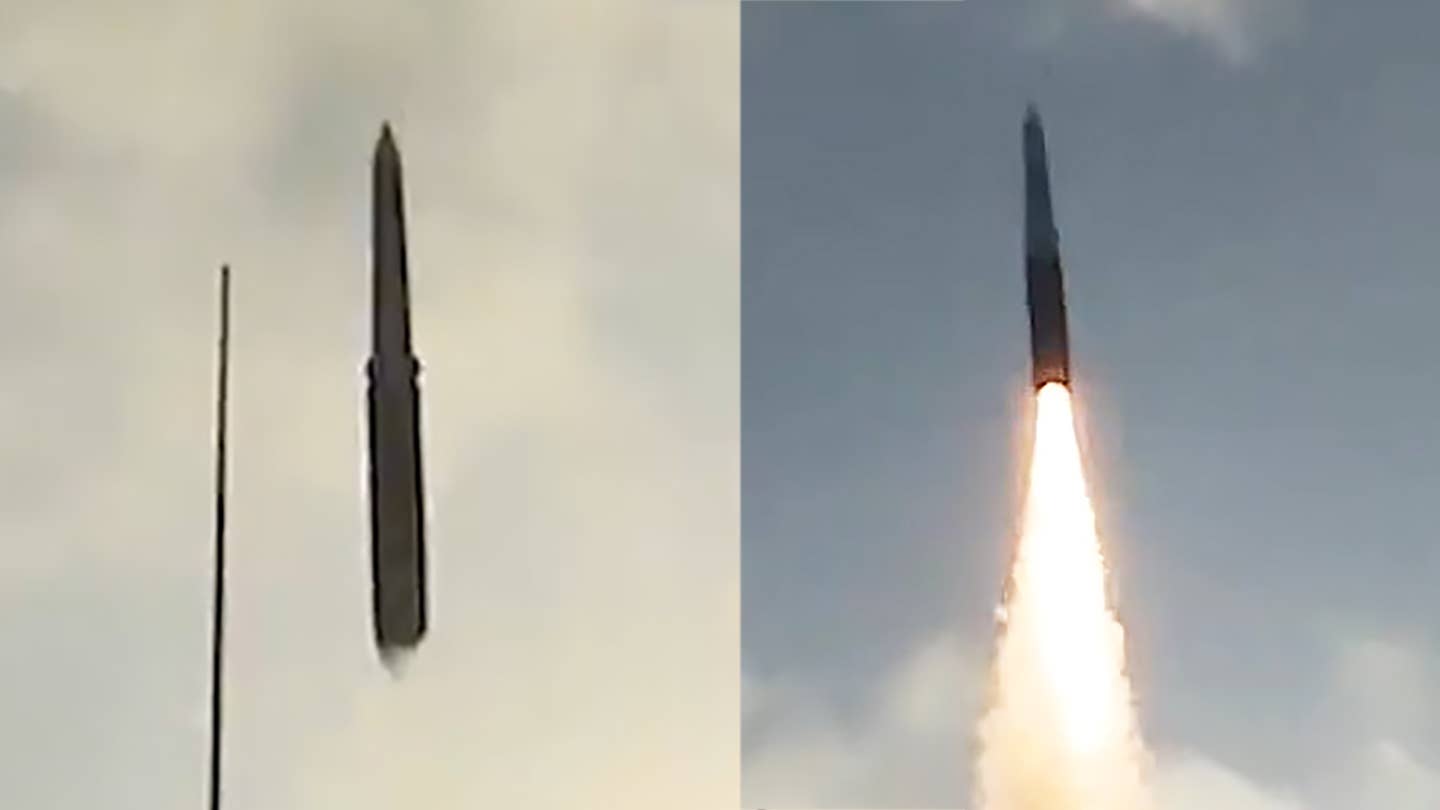 Video has emerged out of China showing what is reported to be one of its huge Type 055 destroyers launching a mysterious new missile out of one of its vertical launch cells. While exactly what missile this is and what concept of operations underpins it isn't perfectly clear, there are certainly some distinct possibilities, one of which is highly probable.

The video clip shows a missile being 'cold-launched' then boosted into the air. The booster is relatively short while its payload is a long conical-like shape with small fins at its base. The design is highly reminiscent of a maneuverable reentry vehicle (MaRV).

Our friend @Alexluck9 on Twitter pointed out that this missile design has been hinted at before as future armament for China's advanced vertical launch system (VLS) equipped warships:

The weapon seen is most likely a sea-launched anti-ship ballistic missile that has been rumored to have been in development for some. Fielding such a weapon at sea would have major implications as, currently, China's only anti-ship ballistic missile capabilities are land-based, with an air-launched type also being in development. In fact, on the same day this video emerged, we also got our best look yet at the air-launched "Eagle Strike" JY-21, which you can read about here. The timing is suspicious, without a doubt, but fits China's flow of 'leaks' that act as informal strategic messaging.

The missile appears to use a thinner, more elongated, conical-shaped maneuvering reentry vehicle compared to the one found on the YJ-21, as well as what we have seen on many other MaRV-equipped missiles. Combined with a much shorter rocket booster, the design is clearly optimized to fit inside the tight confines of a ship's VLS cells. The relatively short booster rocket would substantially reduce its striking distance, but that would be a reasonable tradeoff considering the capability would already be forward deployed at sea. Even a range of a couple hundred or so miles would be beneficial. This weapon could presumably strike fixed targets on land, as well.

The system could borrow some components already in use by the CM-401 shore-based short-range anti-ship ballistic missile, although the MaRV profile is clearly different as is the type's rocket section. You can read all about the CM-401 in our profile on it.

Layering in even short-range anti-ship ballistic missiles with air-breathing anti-ship cruise missiles would complicate even the most advanced naval adversary's ability to defend itself. Also, the shorter range would fit with a Chinese flotilla's organic sensor capabilities for detecting and engaging targets without having to rely on overly complex external datalinks and sensor platforms networks like shore-based medium and long-range anti-ship ballistic missiles rely on.

Another possibility, although one we think is quite remote, is that this is a cruise missile of some type, even perhaps an air-breathing hypersonic one. The fact that the missile appears to enter a push-over maneuver for a shallower fly-out trajectory shortly after clearing the ship further points to this possibility. But still, its silhouette is puzzling if that were the case. It is worth noting that a number of very-high-speed Chinese anti-ship cruise missile designs have emerged in recent years, but that feature body-mounted air intakes to feed ramjet engines and otherwise have configurations that do not look at all like this missile. It's also a greater technological challenge to create something like a hypersonic anti-ship missile than an anti-ship ballistic missile.

Finally, this could be some new anti-air weapon, although we really don't have anything to directly compare it to in terms of its basic shape.

Regardless of the mystery surrounding this weapon, it's another reminder that China is pushing ahead with new weapons concepts for its growing armada.

What do you think it is? Let us know in the comments below.