Committees in the House and Senate want to block Air Force plans to retire its oldest F-22 Raptor stealth fighters.

The U.S. Air Force’s F-22A Raptor air dominance fighter force may be set for a reprieve after Congress stepped in to try and block the service’s plans to retire more than two dozen of the oldest examples of the stealthy jets. Both the House and Senate Armed Services Committees, which oversee funding and oversight of the Pentagon on behalf of the U.S. Congress, are trying to mandate the Air Force to retain — and upgrade — the 33 older-model F-22s that it had wanted to discard under its 2023 budget proposal plans.

The House Armed Services Committee, or HASC, oversees the Pentagon on behalf of the House of Representatives. Its Raptor plans are outlined in a version of the 2023 National Defense Authorization bill released yesterday. The pertinent F-22 portion of that document reads as follows:

“This section would require the Secretary of the Air Force to maintain a minimum quantity of F-22 aircraft with common air superiority mission employment capabilities to meet Department of Defense combat air forces training, testing, and operational steady-state and major contingency requirements in support of geographical combatant commanders’ planning and operations.”

Elsewhere in the HASC document, the committee accepts the Air Force’s proposal to begin retiring its fleet of A-10C close air support aircraft, starting with 21 Air National Guard jets, but challenges a plan to reduce around half of the service’s fleet of E-3 AWACS radar planes.

By making the case for keeping F-22 numbers intact, the HASC follows the Senate Armed Services Committee, or SASC, which provides similar legislative oversight for the military on behalf of the upper chamber. The earlier SASC document calls for legislation that “Prohibits the retirement of F-22 Block 20 aircraft until submission of a detailed written plan for training F-22 aircrew while avoiding any degradation in readiness or reduction in combat capability.” In that sense, the HASC is now pushing even harder for the F-22s to be kept in service.

That proposal involved retiring 33 older Block 20 jets, which would trim the total F-22A fleet size from around 186 to some 153. The plan was justified, in part, due to the fact these aircraft are primarily now used for training and other non-combat duties and the fact these older aircraft are becoming increasingly difficult — and costly — to maintain.

Another argument in favor of ditching those early-model jets was the cost of bringing them up to the latest standard, which the Air Force suggested would cost $1.8 billion over the next eight years. Such work would be required for them to undertake frontline duties, but also to better replicate the combat-coded jets when used as trainers. Those funds, the service argued, would be better spent on upgrading the frontline Raptor force as well as newer F-35A stealth fighters, and for continued development of the Next Generation Air Dominance (NGAD) program.

NGAD, while a much wider air combat initiative, is expected to ultimately lead to a replacement for the F-22, including an optionally manned tactical jet platform. However, this will be just one part of a ‘system of systems,’ to ensure U.S. tactical air dominance for decades to come. Indeed, the promise of this program underpins a broader Air Force plan to divest the entire Raptor fleet sometime in the 2030s.

As well as the Air Force’s wish to retire the 33 older aircraft, the service also has changes to Raptor basing plans in the works. Hurricane damage to Tyndall Air Force Base in Florida in 2018 led to a proposal to permanently move that base’s Raptors to Joint Base Langley-Eustis, or JBLE, in Virginia. Currently, the Tyndall jets are flying from nearby Eglin Air Force Base in Florida. With a smaller Raptor force, the Air Force would then redistribute the remaining aircraft across other units still flying these jets, including the existing 1st Fighter Wing based at JBLE.

Those 33 aircraft to be withdrawn entirely would likely be cannibalized as a source of spare parts to support the more capable F-22 fleet for the rest of its service.

Not only does the HASC proposal call on the Air Force to keep those 33 F-22s in service, but it also wants to see them upgraded to the same standard as the combat-coded jets. The committee calls upon the service to bring all F-22s up to at least “Block 30/35 mission systems, sensors, and weapon employment capabilities.”

The Pentagon’s Fiscal Year 2023 budget request documents also reveal more details of planned upgrades for the frontline Raptor fleet, improvements that would, if the HASC gets its way, now also have to be made to the earlier Block 20 jets, too.

These upgrades include enhanced electronic warfare capabilities, and long-awaited infrared search and track sensors. Some of these projects are related to previously unseen low-observable pods spotted under the wings of an F-22 earlier this year. The same documents also describe navigation and radar upgrades, plus “low-drag tanks and pylons,” which would address the F-22’s well-publicized lack of range for certain missions, especially in the Pacific theater.

Air Force Magazine also reported that a HASC staff member told reporters in a briefing last week that keeping the older Raptors in service, and making them combat-capable, was an issue of “risk mitigation.” The Committee also disclosed that the plan was a consensus view of Democrat and Republican members.

The same staff member also explained that the committee’s objection to early F-22 retirements is also based upon a promise from the Air Force about its overall fighter capacity. This dated from as long ago as 2010 when the decision was made to end F-22 production early, at 187 aircraft. That in turn translated into high operating costs, leaving a ‘silver bullet’ fleet that is extremely capable, but also complicated and costly to maintain.

Bearing in mind that the Raptor fleet was far smaller than once planned, the Air Force had assured the HASC that the fighters “would always be available to meet contingency requirements,” together with 234 F-15Cs. That situation has since changed with plans to retire the F-15C and massively cut back the number of F-15EX jets being acquired to replace them.

Coupled with this, the staff member pointed to concerns about delays in the NGAD program, meaning the intended Raptor replacement won’t be available as soon as had been hoped. It is noteworthy that while the Air Force has remained bullish about the NGAD program, Congress has been much more skeptical about its progress and ambitions.

“We think there’s significant risk in meeting future air superiority requirements,” HASC added. “And so we’re holding the Air Force accountable to their commitment to have the training-coded jets combat-capable.”

It’s also notable that the F-22 itself appears to be becoming an ever more important asset for the Air Force as it seeks to mature technologies that are being developed under the NGAD program. As we explored in the past, the Pentagon’s Fiscal Year 2023 budget request documents reveal that the technology is being trialed on the F-22 ahead of its use in NGAD, with the potential for these same advances to flow back into the Raptors. This, too, is another convincing argument for keeping the F-22 fleet intact.

In the meantime, the nature of the potential threat is only becoming more worrisome. China continues to develop more than one stealthy fifth-generation fighter as well as comprehensively upgrade existing fourth-generation designs. Russia, while it has made only slow progress with its next-generation Su-57 Felon, is also working on other advanced fighter projects and has now shown itself willing to throw its in-service fighters into combat in Ukraine.

In the past, we have reflected on the pros and cons of a smaller, more capable Raptor force. It certainly makes some sense to invest in the most effective F-22s, and make them better still, especially with NGAD on the horizon and F-35A numbers swelling. On the other hand, the F-22 is already struggling for availability, with a mission-capable rate of around 50% in peacetime. On top of that, there are only about 125 ‘combat-coded’ Raptors in the inventory at any given time. Forcing the frontline fleet to take up the training requirement wouldn’t help that and having some kind of reserve force for possible conflict scenarios could be a major advantage.

Should the Air Force get its way, and start divesting its Raptors, that would further drive an ongoing process of downsizing that is also seeing other fleets shrinking. The service has already completed the process of retiring 17 of its B-1 bombers and Congress currently seems certain to back plans to start disposing of more A-10s. Air Force leadership claims these moves free up much-needed funds for other projects, including upgrades, but place an increasing burden on the smaller fleets that are left.

While there are still hurdles left before the recommendations of the HASC and SASC can become legislation, it’s clear that the U.S. Congress, in general, is increasingly concerned about the viability of the Air Force’s high-end fighter fleets. Despite the cost argument behind retaining them, it looks like it will be no easy task for the service to start retiring its much-vaunted Raptors, regardless of these jets’ current combat value. The goal now is to turn the Next Generation Air Dominance program into a real capability by the end of the decade. 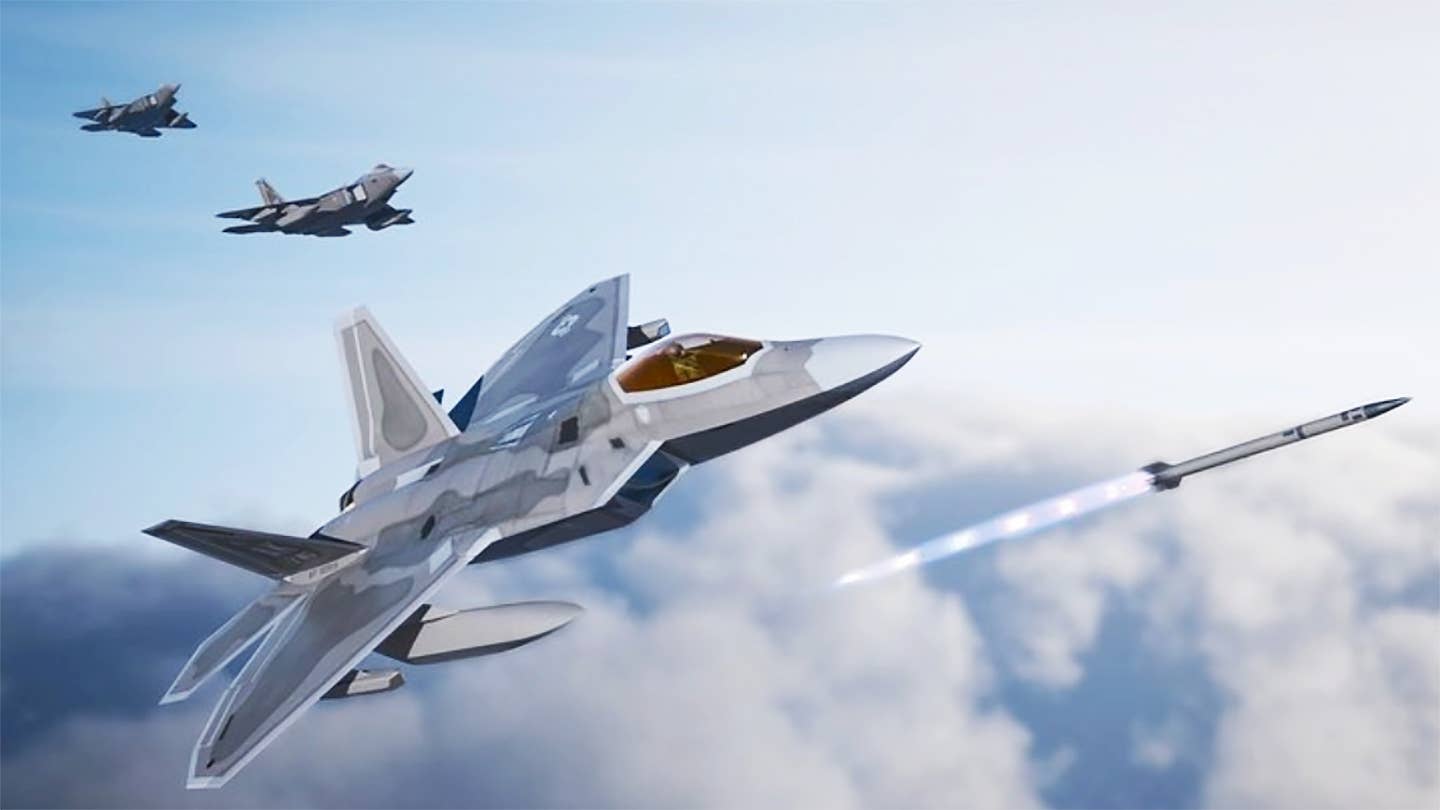 The art shows us new features the Raptor is gaining, including stealthy fuel tanks and special underwing pods, as well as a new missile. 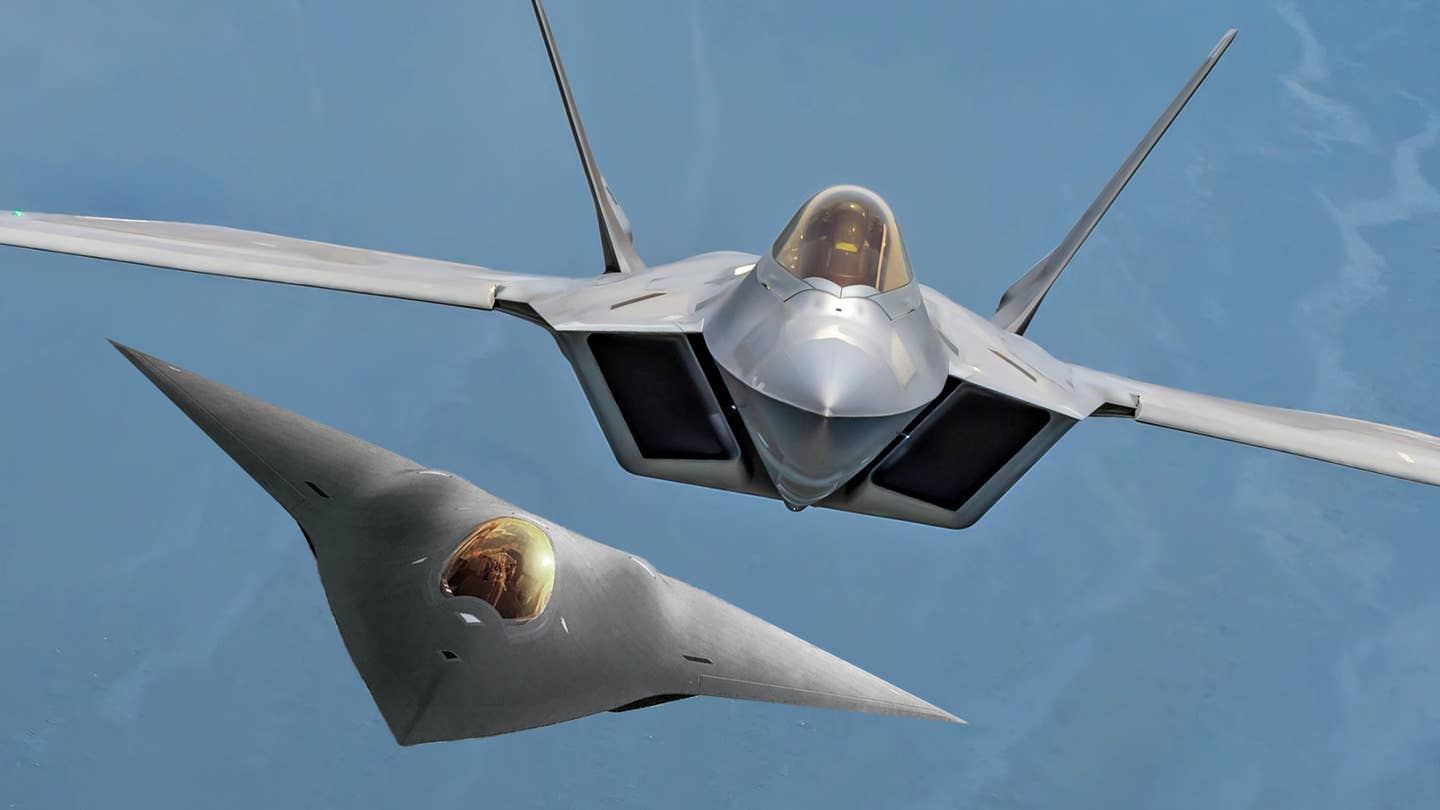