Debacle On The Donets: How Russian Forces Got Obliterated Trying To Cross A River

Russia wants to encircle Ukrainian troops on a key part of the battlefield, but they can’t cross the river in order to do so without getting killed. 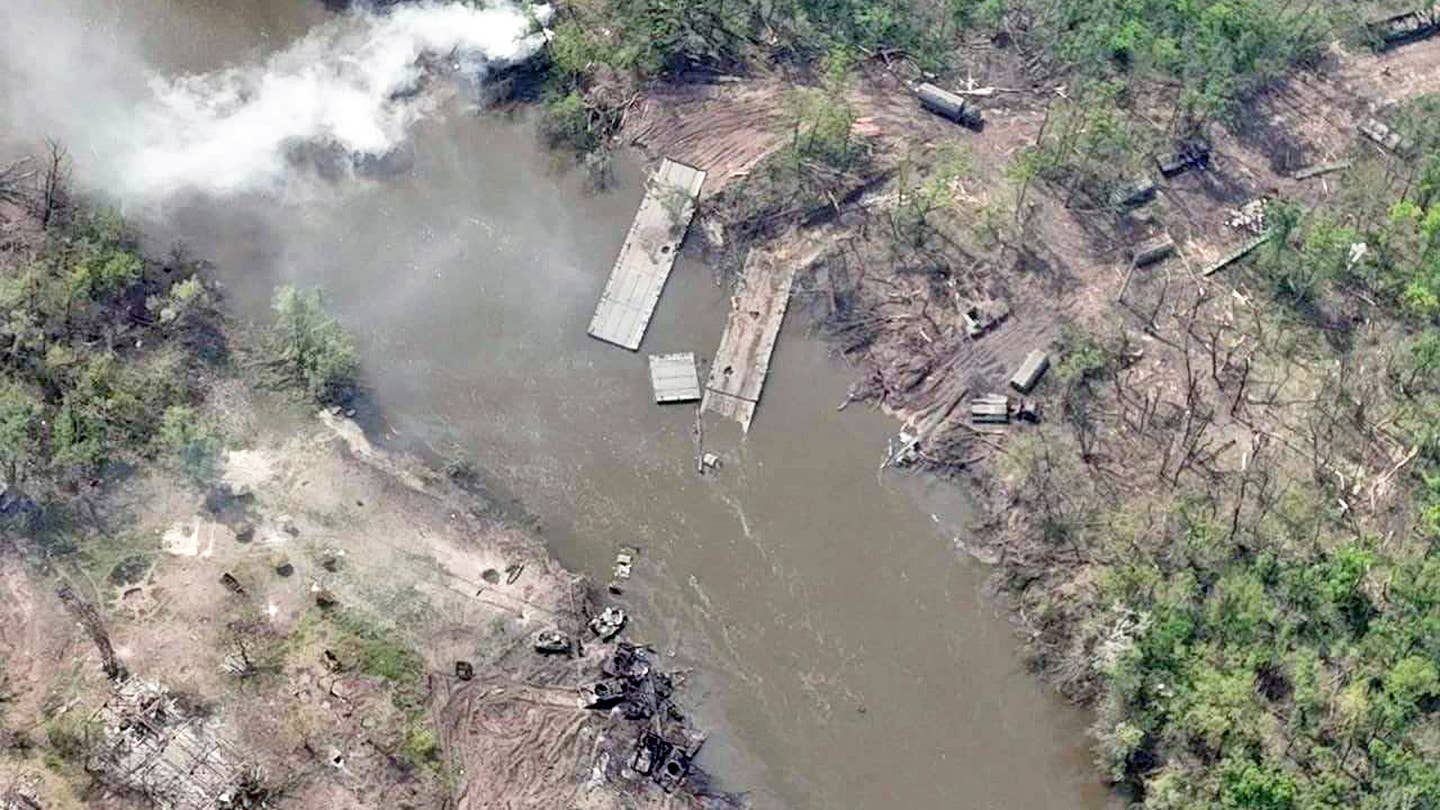 Days after taking massive losses trying to cross the Siverskyi Donets by pontoon bridge, Russian forces appear to be trying to do it again.

A number of independent open-source analysts closely monitoring the war in Ukraine say despite those losses, the Russians continued to seek to cross the river.

The reason why Russians continue pressing the attack across the river is likely their attempt to encircle Ukrainian troops in Lysychansk to the southeast.

According to a Twitter thread posted by "Maxim," who goes by the Twitter handle @kms_d4k and claims to be a Ukrainian EOD (explosive ordnance disposal) officer, he and some Ukrainian recon units “went to explore the area of Hryhorivka and Bilohorivka” on May 7.

“Frontline units in Bilohorivka reported multiple RU vehicles gathering on the other side of the river,” he posted. What follows comes from his thread:

“I explored the area and suggested a location where Russians might attempt to mount a pontone (SIC) bridge to get to the other side."

Using range finders to figure out that the river at that point was 80 meters wide, Maxim said he calculated that the Russians would need eight 10-meter bridge sections to cross.

“With that flow of the river, I knew they would need motorized boats to arrange such a bridge, and it would take them at least two hours of work. Took me a day to check everything. And I had to do it on 8th of May as well."

Maxim said he reported that information to his commanders.

He also said he told the Ukrainian unit observing that part of the river to listen for the sound of motorboats.

“Visibility was shit in the area because Russians put fields & forests on fire, and were throwing a lot of smoke grenades. On top of that, it was foggy.”

But early on the morning of May 8, those troops heard the sound of motorboats.

“Right at the place I said."

Maxim said he was there as well, and used his drone to watch the Russians construct the pontoon bridge, which he reported immediately to his commanders.

“Artillery was ready. We have been able to confirm Russians mounted 7 parts of the bridge out of 8. Russians have even succeeded to move some troops and vehicles over the river. Combats started.”

About 20 minutes after a recon unit confirmed the Russian bridge was being mounted, “HEAVY ARTILLERY engaged against Russian forces, and then aviation chipped in as well. I was still in the area, and I have never seen / heard such heavy combat in my life.”

He did not specify what kind of aviation assets were used. The War Zone reached out to Maxim, but we have not yet heard back from him.

After a day of heavy fighting, the bridge was down.

“Some Russian forces (~30-50 vehicles + infantry) were stuck on Ukrainian side of the river with no way back. They tried to run away using broken bridge. Then they tried to arrange a new bridge.”

Ukrainian aviation then started a heavy bombardment of the area, “and it destroyed all the remains of Russians there, and other bridge they tried to make."

By May 10, the pontoon bridge was gone.

“Their strategic objective was to cross the river and then encircle Lysychansk. They miserably failed.”

The War Zone could not independently verify Maxim’s claims, but on March 9, a senior U.S. defense official told reporters that the Pentagon was aware of the battle.

“We do have assessments that Russians have built some pontoon bridges north of Popasna and we do have indications that the Ukrainians did successfully destroy one of those pontoon bridges,” the official said, speaking on condition of anonymity to discuss the issues.

The official added that Russians have frequently tried to build such bridges across Ukrainian waterways.

"There's rivers and streams all throughout the Donbas," the official said. "If the mud is such that you're driven to paved roads, rivers become even become a bigger obstacle. So it doesn't surprise me that they would try to build fords across some of these rivers."

Russian forces sustained “remarkable losses” in trying to cross the river, according to Ukraine Weapons Tracker. This is a widely held sentiment across the open-source and defense analyst community.

All told, about 73 Russian vehicles were destroyed or abandoned, according to Blue_Sauron, including “a BTG worth” of armored fighting vehicles.

The number of Russians killed and wounded in the attack varies. Maxim wrote that the rumor was more than 1,500, while another account put the total at far less.

"Contrary to the majority of comments, I suggest the actual Russian combat casualty (wounded+killed) can be as low as 200~250," @partizan_oleg Tweeted. "Dead - some 50."

The reasons, he surmised, are that some Russian vehicles appear to be abandoned before they were destroyed, potentially allowing their crews to be spared. And Russian BTGs "are heavily undermanned."

The War Zone was not able to independently verify any casualty claims.

Why the Russians wanted to cross

The river crossing is part of an effort to secure the Siverskyi Donets river between Sloviansk and Severnodonetsk, Henry Schlottman - a former Army intelligence analyst who works with a small team to assess ongoing operations in Ukraine - told The War Zone Thursday afternoon.

“They were unable to achieve the large-scale envelopment via the Izium-Sloviansk axis, so they've refocused their main effort to be what appears to be the front between Lyman and Severodonetsk,” he said. “It looks like mostly units from the Central Military District here, but it's getting harder to identify units as it looks like composite BTGs are being formed across multiple brigades/regiments."

The short-term objective, said Schlottman, now appears to be the isolation of Severodonetsk.

“I think they've been trying to do that with artillery fire and airstrikes alone up until about a week ago and hoping that the Izium sector develops favorably,” he said, “but that hasn't happened.”

Instead, the Russians have “decided to commit their maneuver forces to a more costly course of action and directly assault the Ukrainian lines south, across the Siverskyi Donets,” Schlottman said.

The recent fall of Popasna “raises the possibility of a northern advance too,” said Schlottman, adding though that there’s not a lot of reporting from there. “That route may be less defended than the Siverskyi Donets line, but it also primarily LPR/DPR forces in Popasna, plus Naval Infantry/Wagner possibly.”

At a minimum, Schlottman said, “Popasna serves as a position to set up their fires from and also try to fix as many Ukrainian forces away from the Siverskyi Donets as possible.”

The losses from the pitched two-day battle that began May 8 were “significant,” said Schlottman, “but probably not decisively so.”

It's unclear, he said, what strength many of the Russian battalion tactical groups (BTG) are at at this point, “but it looked like it was close to a full-strength one, at least in terms of mechanized infantry and armor.”

The total front Russians are trying to advance on may have approximately 20 BTGs, from the Oskill River to Severnodonetsk, Schlottman said.

That represents “about 5% of their committed ground combat power if only looking at maneuver forces,” he said.

But “it's been rare to see one actually in close to full strength and trying to advance despite taking apparently heavy losses for several days as we saw at Bilohorivka,” said Schlottman. “Speaks to their determination and willingness to commit resources to this offensive, despite the high risk of significant losses. It looks like they are now attempting to advance again in multiple locations as of this morning.”