The modification to China’s J-10 fighter follows along a very similar evolutionary path as its counterpart, the American F-16.

Photos of a new configuration of China’s primary medium-weight fighter, the J-10, possibly representing a new J-10D model, have begun circulating online. The images show the aircraft with a relatively familiar modification — an enlarged fairing running along the length of the jet’s spine.

Similar to specific export variants of the F-16D and F, the snapshots show the J-10 in a prominent dorsal ‘big spine’ configuration. This addition could potentially house a variety of systems, including expanded countermeasure and electronic warfare systems, as well as communications and passive sensors, not to mention the cooling needed to support those features. It could also potentially provide additional space for fuel, but this is less likely. The extra room is especially important for two-seat fighter derivatives that usually give up extra space and fuel for a second crewman.

Andreas Rupprecht, a Chinese aviation analyst and author who Tweets under the user name @Rupprecht_A, suggested that the jet in the pictures could also be a variant of the J-10 designated as J-10CY, however that has yet to be confirmed. Because of the jet’s visual similarities to the J-10B, the aircraft pictured could even possibly be a testbed craft, built to serve as a demonstrator for the J-10D while its manufacturer, Chengdu Aircraft Industry Group, tests new capabilities and better hones the hardware necessary for the J-10D’s intended mission.

Considering the recent appearance of the big spine, that mission is now suspected by some to be in the realm of electronic warfare and potentially suppression of enemy air defenses (SEAD). China is investing heavily in this space of its tactical jet portfolio, with the J-16 electronic attack variant based on the Flanker heavy fighter being rolled out not too long ago. It also uses the ‘D’ designation — J-16D.

That speculation is further supported by the evolution of the F-16. As mentioned earlier, the ‘big spine’ F-16 modification first appeared on developmental test jets (AFTI, for instance), but soon migrated to export customers. Israel was the first to receive it on its F-16Ds. Its F-16Is also have it. Some export F-16Ds, including those belonging to Singapore, Greece, Turkey, Iraq, and Egypt sport the big spine configuration, and the UAE’s unique F-16Fs have it as well. It’s an option on new Block 70/72 Vipers and proprietary export configurations feature it prominently, too. In India’ s case, this includes on single-seat models. But maybe most importantly, it is present on Pakistan’s Block 52 F-16Ds.

Being that China exported a number of J-10C fighters to Pakistan just this year, some are theorizing that the modification is one being carried out at the request of the Pakistan Air Force, which already enjoys a similar setup on their aforementioned F-16Ds. This could manifest itself in new build aircraft destined for Pakistan or possibly as a retrofit option. Either could be true for Chinese examples, as well.

A two-seat J-10 with expanded space for hardware and cooling could have other advantages, as well. The race to implement more artificial intelligence, autonomy, sensor fusion, and powerful data processing into the cockpits of fighter jets could be another impetus for this configuration. Manned-unmanned teaming concepts, for example, could be an option as was theorized for a future capability set when images of China’s two-seated J-20 stealth fighter first began to surface. We know that Flanker-based Chinese testbeds aircraft are working in this realm as well. A second crewman could control any unmanned systems working alongside the manned platform and the J-10’ s newly added avionics spine could accommodate the extra hardware and communications gear for manned-unmanned teaming and AI infusion experiments.

In fact, look no further than Edwards AFB in the United States where similar initiatives are underway using the heavily modified NF-16D VISTA aircraft, which has now been re-designated as an x-plane, the X-62A. Knowing how China likes to ‘emulate’ the U.S. for many of its weapons development initiatives, this is a very interesting potential connection.

So, nothing is definite at this time, but certainly, the big spine J-10 is of great interest and analysts will be keeping a close eye on its development via whatever imagery emerges or information China formally releases.

Update, July 20: While the story of the ‘big spine’ J-10 continues to develop rapidly, as more photos emerge, the latest information suggests that the aircraft may indeed be the J-10CY — a new version of the top-of-the-line J-10C variant intended specifically for service with the demonstration team of the People’s Liberation Army Air Force (PLAAF), which is named Ba Yi, meaning August 1st.

New imagery of the aircraft reveals what appears to be a tube in the rear fuselage, immediately above the engine nozzle. This looks similar to the smoke-producing equipment found on earlier J-10AY aircraft operated by the Ba Yi team.

Similarly, it appears that the internal 23mm cannon has also been removed, or at least is now enclosed by an aerodynamic fairing, which would fit with the demonstration team theory.

Also unusual is the fact that the aircraft retains the Russian AL-31F engine that was originally fitted to early models of the J-10, before being superseded on the production line by the locally made WS-10 turbofan. Since around mid-2019, all new-build J-10Cs have been powered by Chinese engines.

This again may point to the aircraft being intended for a second-line (air display) role rather than for operational service, although why exactly the aircraft would sport the big spine remains mysterious. 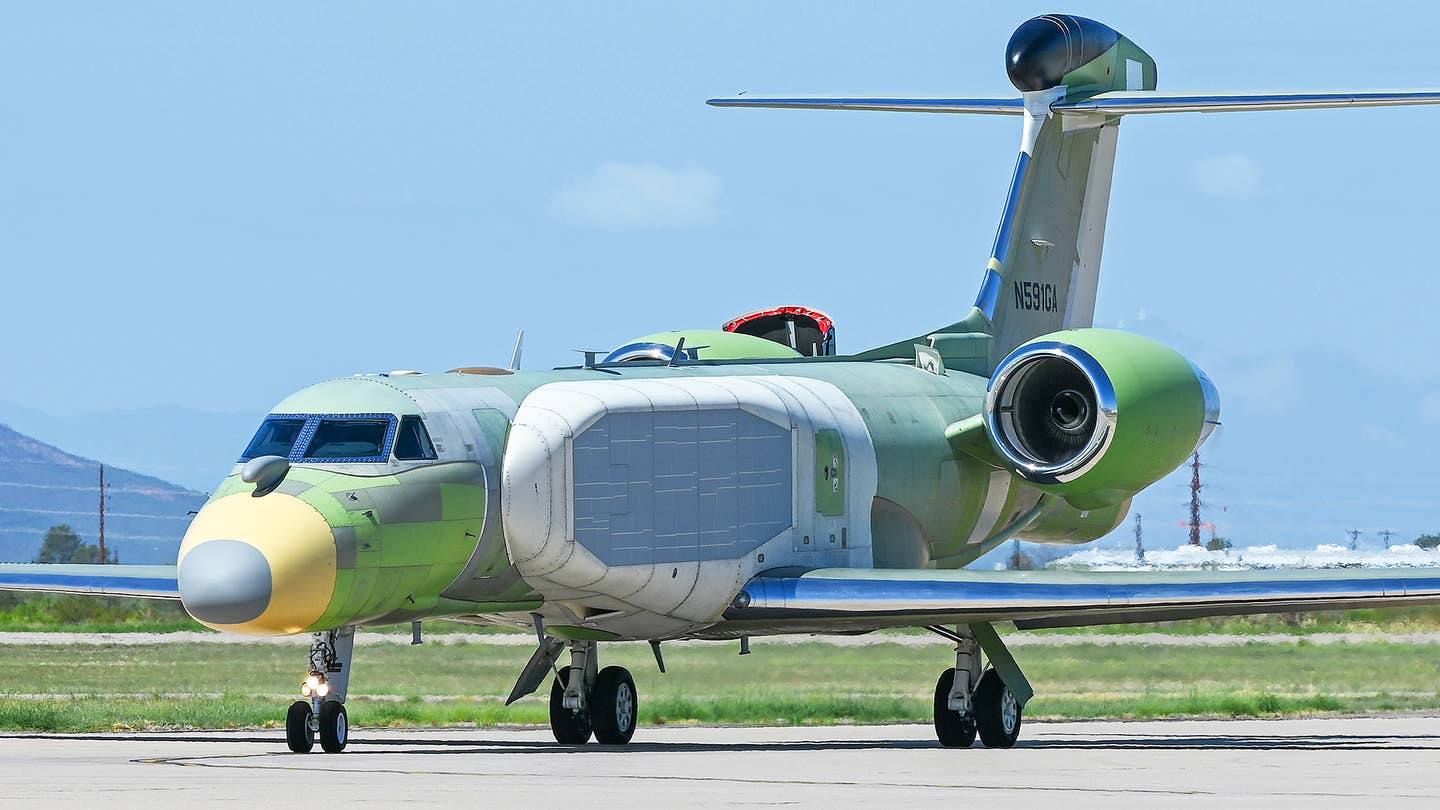