China “is standing by” if the House Speaker “dares” to visit Taiwan as U.S. carrier strike group sails near the island.

Though Speaker of the House Nancy Pelosi's possible visit to Taiwan is still unconfirmed, there are a growing number of reports that the trip is not only expected to go ahead, but may be imminent. President Joe Biden's administration appears to have taken a new public tone on the issue, as well, saying she shouldn't feel intimidated against going. This all comes as Chinese officials continue to issue unusually strong public threats, with the country's Foreign Ministry spokesman Zhao Lijian saying just today that the People's Liberation Army "sit idly by" if Pelosi "dares to go" to the self-governing island.

CNN reported earlier today that Pelosi, a California Democrat, will indeed travel to Taiwan and stay on the island overnight, citing unnamed U.S. and Taiwanese officials. This follows other reports within the last 24 hours that she could be headed there Tuesday night or Wednesday morning, possibly after stopping in Malaysia. It is already Tuesday, Aug. 2 in Taiwan.

The Speaker of the House is currently in Singapore with a Congressional delegation on the first stop of a regional tour that is officially also scheduled to take them to Malaysia, Japan, and South Korea. At the time of writing, neither Pelosi's office nor any other branch of the U.S. or Taiwanese governments have formally confirmed a visit to Taiwan, or even that it's a possibility. Previous media reports citing a copy of the Speaker's itinerary indicated that the spot was still seen as "tentative" as of last week.

How Pelosi and the rest of the delegation traveling with her might get to Taiwan is unclear. It seems unlikely that they would seek to somehow surprise Chinese authorities, who have very good intelligence and general situational awareness about what happens in the airspace in this region, by deviating from an established flight plan and heading to the island.

A number of U.S. Congressional visits to Taiwan in the past year or so have seen lawmakers fly there on U.S. Air Force C-17 Globemaster III cargo planes, as well. So far, Pelosi has been making use of an Air Force C-40C, a militarized Boeing 737-series airliner, which raises the possibility she and the rest of the delegation may first transfer to a different and potentially better protected aircraft before attempting to head to Taiwan. Of course, the C-40C does have secure communications systems and countermeasures to protect against heat-seeking missiles.

For its part, the Chinese government has been putting out a steady stream of threats warning Pelosi against visiting Taiwan. Though members of Congress visit the island on a somewhat regular basis, Pelosi is a special case for authorities in Beijing. In the United States, the Speaker of the House is the third most senior government official and would be next in line to take over as chief executive if the President and Vice President both died or were otherwise unable to perform their duties. The last time a serving Speaker visited Taiwan was in 1997, when Newt Gingrich, a Georgia Republican, traveled there. That trip came just over a year after the conclusion of the Third Taiwan Strait Crisis, which was a seminal moment in U.S.-Chinese relations and a key driver behind the People's Liberation Army's (PLA) extensive modernization efforts, especially with regard to its still-growing aircraft carrier ambitions, in the ensuing decades.

Chinese Foreign Ministry spokesman Zhao Lijian told reporters at a routine briefing just today that Pelosi visiting Taiwan would have an "egregious political impact" due to her position within the U.S. government. "We would like to tell the U.S. once again that China is standing by, and the Chinese People’s Liberation Army will never sit idly by," he added.

"China will take resolute responses and strong countermeasures to defend its sovereignty and territorial integrity,” Zhao continued. “As for what measures, if she dares to go, then let’s wait and see."

There have been concerns for weeks now that Chinese military aircraft could seek to impede the progress of any plane attempting to bring Pelosi to Taiwan or otherwise harass it or worse. This had reportedly prompted the White House and the U.S. military to work behind the scenes to dissuade the Speaker from heading to the island. U.S.-Chinese relations are already at a particularly low point over Taiwan and a variety of other geopolitical and economic issues. However, that position looks to have significantly softened recently, providing more evidence that Pelosi will indeed head to Taiwan at some point in the near future.

"We want to make sure that when she travels overseas, she can do so safely and securely and we’re going to make sure of that. There is no reason for the Chinese rhetoric. There is no reason for any actions to be taken. It is not uncommon for congressional leaders to travel to Taiwan," John Kirby, who is currently the coordinator for strategic communications for the National Security Council, said in an interview today on CNN's "New Day" morning program. “We shouldn’t be as a country – we shouldn’t be intimidated by that rhetoric or those potential actions. This is an important trip for the speaker to be on and we’re going to do whatever we can to support her."

Kirby did not confirm or deny that Pelosi was planning to go to Taiwan. He has also said last week that the U.S. government had no indications that the PLA was actively building up its forces opposite Taiwan, despite preparations for snap drills that were held over the weekend. The Chinese military, of course, already has an extensive array of air, naval, and ground forces arrayed in the eastern portion of the country, including right along the Taiwan Strait.

Whether or not Pelosi and the rest of the delegation currently accompanying her on her tour of Asia stops in Taiwan or not remains to be seen, but there is currently broad bipartisan political support for such a trip in Congress. The U.S. government has a complicated relationship with the island, which the regime in Beijing treats as a rogue province and that American officials do not technically recognize as an independent country. By law, U.S. officials do reserve the right to engage diplomatically with their Taiwanese counterparts and help support its military, among other things, until the island's status is settled conclusively one way or another.

In addition, the comments from the National Security Council's Kirby today make clear that the Biden administration has no interest in being seen publicly as letting Chinese authorities dictate with American legislators can and cannot do. Biden himself has publicly indicated on multiple occasions now that the U.S. government is actively prepared militarily to defend Taiwan against Chinese aggression, comments that the administration has repeatedly sought to water down in response to subsequent outcries from Beijing.

The obvious concern is that all of this has created something of a perfect storm, where the Chinese government will feel compelled to act in an unusually aggressive manner in response to any attempt by Pelosi to travel to Taiwan. Depending on how the U.S. or Taiwanese militaries might try to safeguard her and her colleagues on a trip to the island, such as a possible fighter jet escort for their plane, it could increase the possibility of some kind of skirmish, which would in turn risk fueling further escalation.

With this in mind, it's worth noting that the U.S. Navy's supercarrier USS Ronald Reagan (CVN-76) is reportedly sailing in the Western Pacific to the northeast of the Philippines and appears to have been moving in the general direction of Taiwan for days now. The carrier and its associated strike group are being accompanied by the amphibious assault ships USS America and USS Tripoli, which are loaded with Marine F-35B Joint Strike Fighters, according to a report from USNI News. This is an extremely capable air and naval force and appears well-positioned to respond to any potential crisis that might develop.

In terms of other American forces that may be in a position to respond quickly to any contingencies related to Taiwan, the U.S. Air Force notably demonstrated its ability to push fighter jets based in Japan south all the way to the South China Sea last year.

Another option might be for Pelosi to use a more discreet alternative to something like a C-17. For instance, the Air Force C-146A Wolfhound special operations transports, which carry civilian-style paint schemes and are routinely employed on missions where the goal is to attract less attention for reasons of political sensitivity. Last year, a C-146A was spotted flying into Taipei’s main Songshan Airport. In that instance, local media reported that the aircraft, which flew to Taiwan from Kadena Air Base on Japan's island of Okinawa, was bringing in a small cargo for Sandra Oudkirk, the director of the American Institute in Taiwan and de facto U.S. ambassador.

At the same time, Pelosi and other lawmakers being seen as slinking into Taiwan on something like a C-146A could prompt jabs from Chinese officials about forcing American officials to sneak around, and political criticism along similar lines back home in the United States.

It's also possible she could fly on a commercial plane, which would make any action against her flight, even symbolic ones, more complex for China to execute.

All told, regardless of whether or not Pelosi and her delegation are actually set to visit Taiwan this week and what such a trip might actually entail, U.S. and Chinese officials appear increasingly to be locked on something of a collision course over the issue, even if only a diplomatic one.

Only time will tell what form the resulting brinkmanship between the two countries might take, both in any immediate responses by either side and in the longer term.

In a significant change from the official U.S. position last week, John Kirby, coordinator for strategic communications for the National Security Council, said at a press conference today that the American authorities now do have indications that the Chinese military may be "positioning itself to potentially take further steps" in response to Nancy Pelosi's potential forthcoming visit to Taiwan. He added that American authorities would not "take the bait or engage in saber-rattling" in response.

When asked to elaborate on what steps Chinese forces could be preparing to take, Kirby offered a number of possibilities. These might include firing various kinds of missiles in the Taiwan Strait, sending a large number of military aircraft into international airspace within the Taiwanese Air Defense Identification Zone (ADIZ), crossing the so-called "median line" that serves as a de facto maritime border with the mainland, more PLA exercises, and attempting to further assert legally dubious claims to total Chinese sovereignty over the Strait. These are all courses of action that Chinese authorities have used in the past during spikes in tensions with the government in Taiwan, as well as its U.S. benefactors.

Kirby warned that "Beijing's actions could have unintended consequences" that might escalate the situation and that "we will not be intimidated."

Kirby otherwise reiterated the same basic points he had made earlier in the day during his interview on CNN about Pelosi's right to visit Taiwan, the U.S. government's responsibility to ensure her safe travel anywhere, and that U.S. policy toward China and Taiwan remains unchanged. He also declined again to confirm whether not or Pelosi currently planning to head to the island, but did say that since she flying on a U.S. military aircraft that "we'll know" if and when she does. 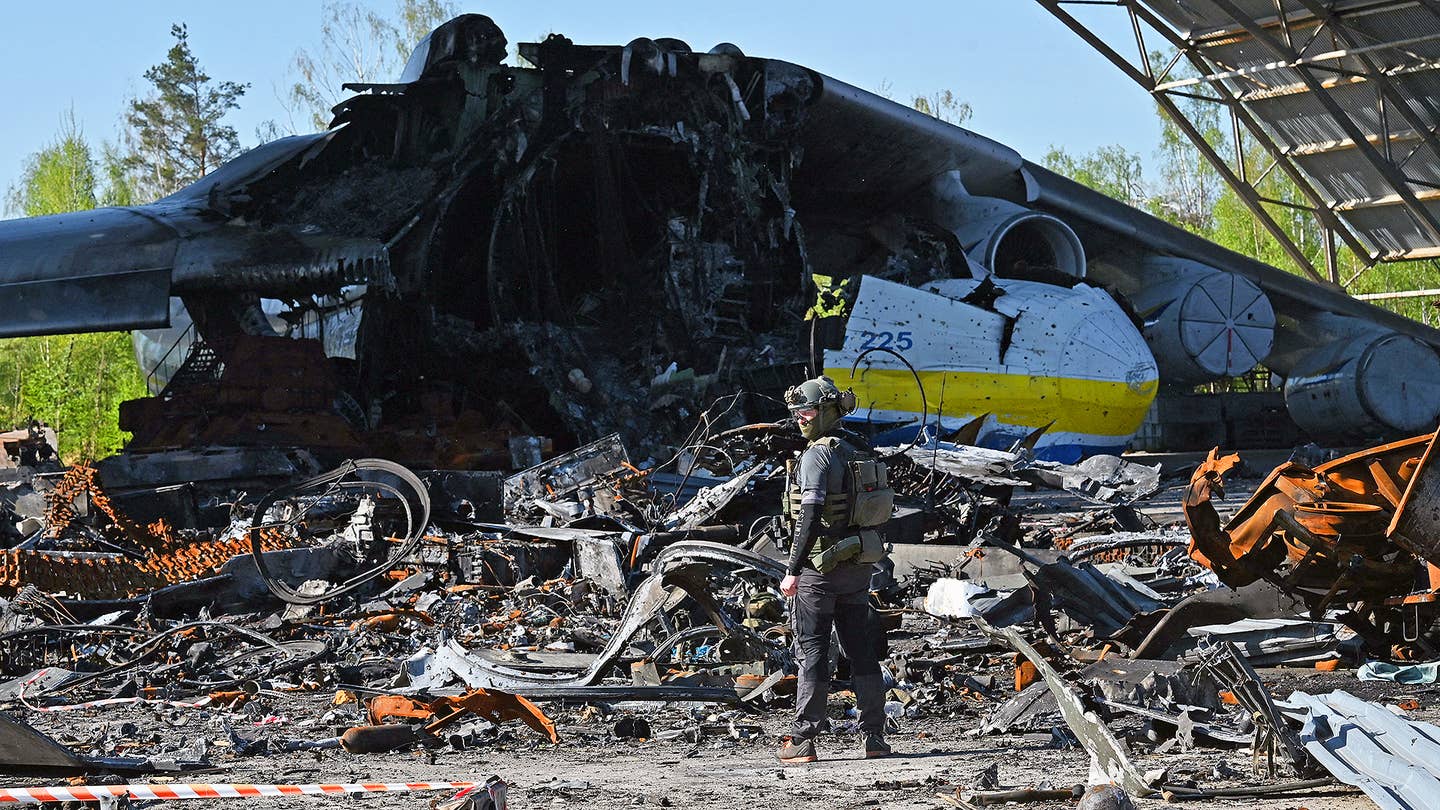 A new report details the lengths the U.S. went through to convince Ukraine’s president and the world that Russia would attack. 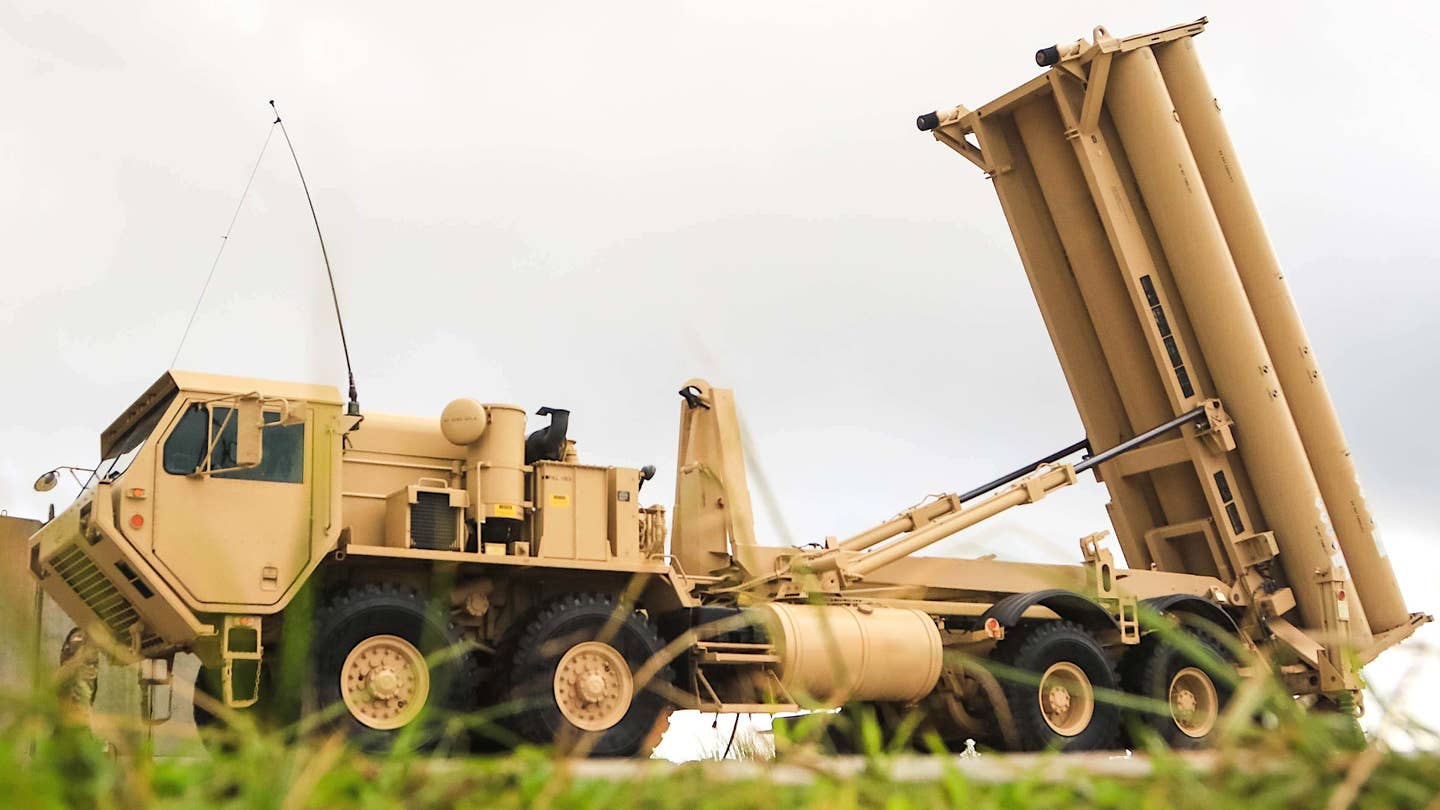 The U.S. military has a sense of what new missile defenses it wants on Guam but now it has to figure out where to put it all. 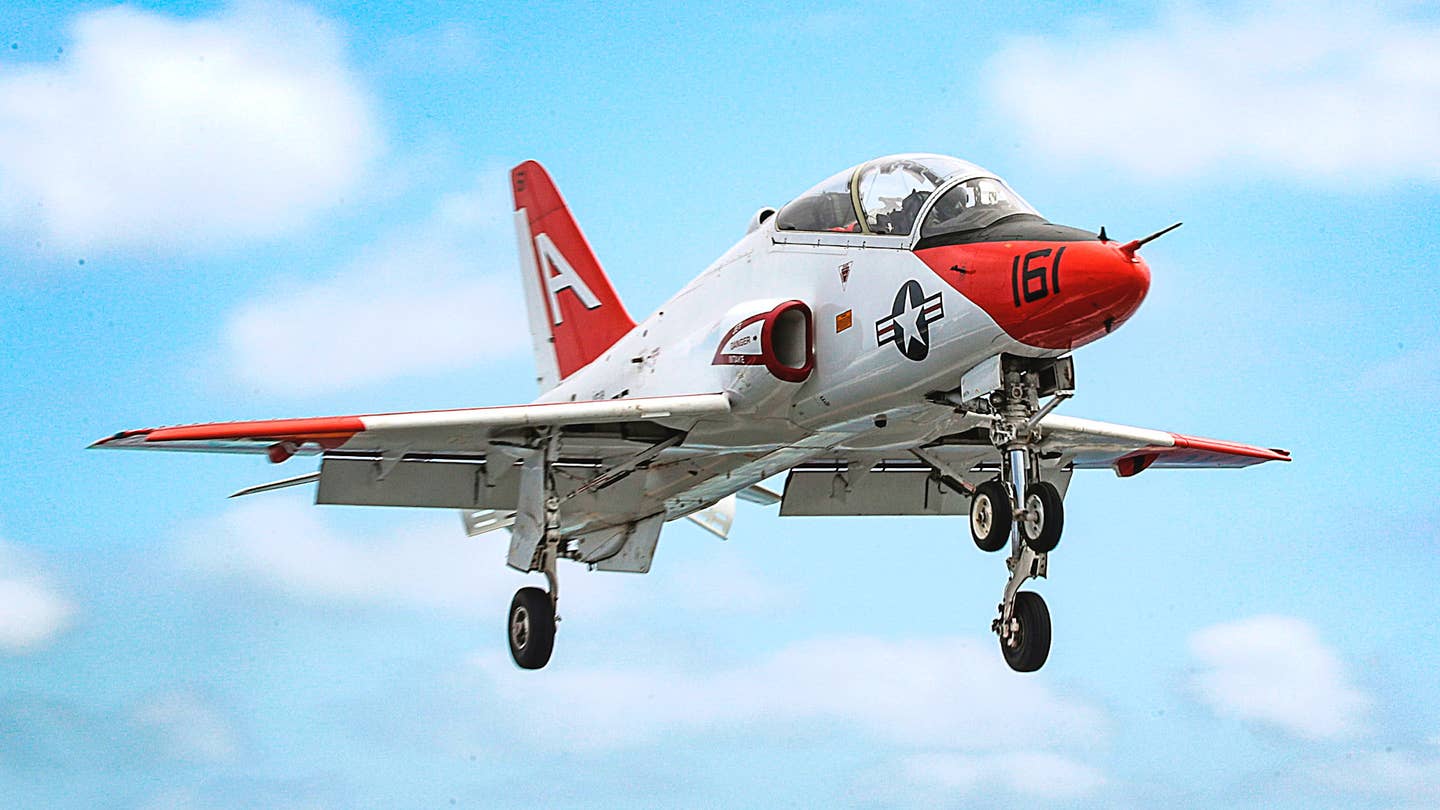 The instructor pilot flying the plane at the time was conducting a routine training flight and was able to safely eject.