The next ‘Marine One’ helicopter might be delayed, but South Korea already operates its own version of the VH-92. 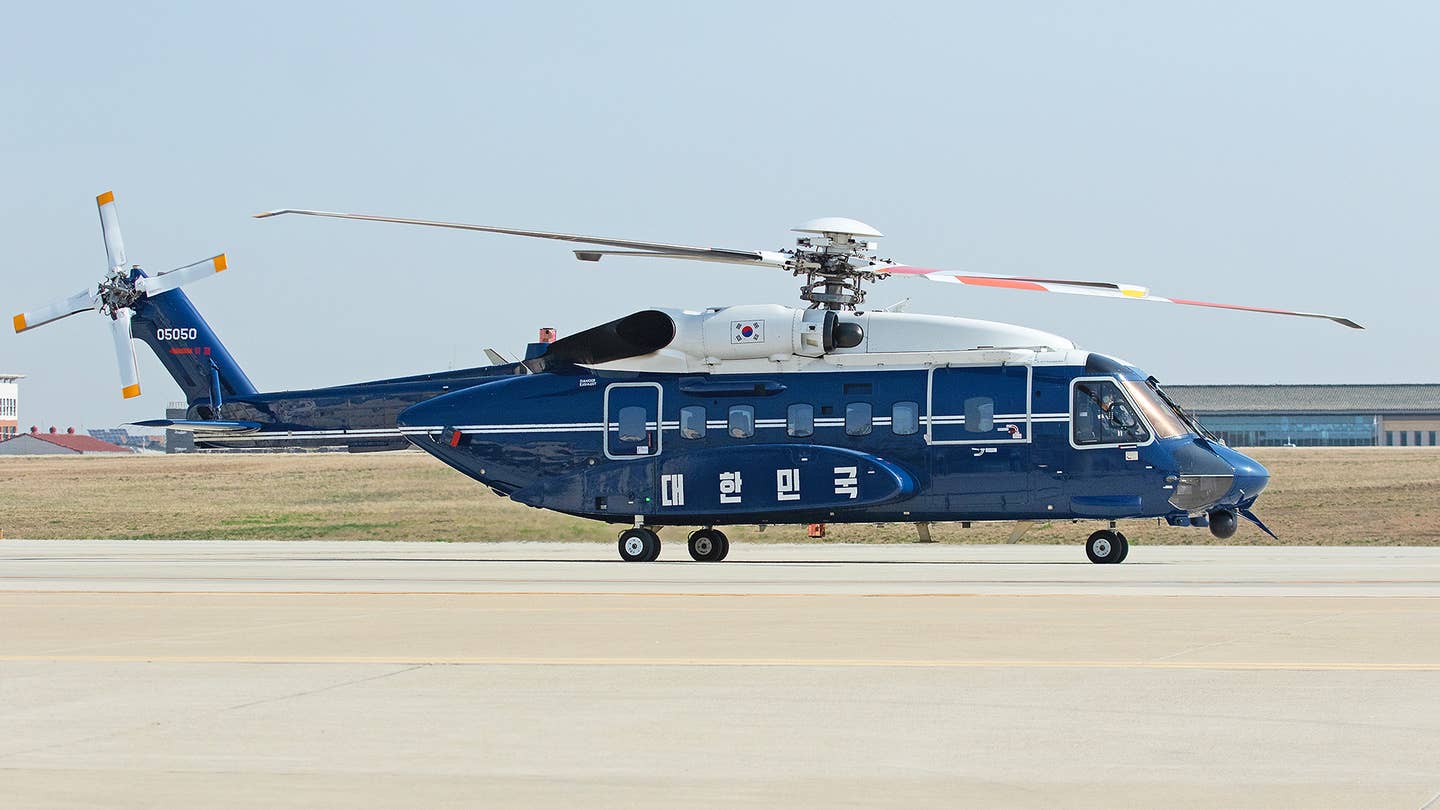 Military helicopters assigned to South Korea’s VIP aircraft fleet were on show at Camp Humphreys, a major U.S. Army garrison near Seoul, recently, when the base hosted the South Korean president-elect, Yoon Suk Yeol. Examples of the Republic of Korea Air Force’s VH-60P and VH-92 helicopters were seen during that visit, the latter notable for being an earlier iteration of an S-92 outfitted for the head of state transport mission. While they use the same baseline airframe, this helicopter is quite different from the U.S. Marine Corps’ VH-92A, a type that has suffered high-profile delays on its path to becoming the next U.S. presidential helicopter in the all-important ‘White Top’ Marine One role.

Photos released by the Pentagon show the South Korean president-elect’s visit on April 7, during which he was briefed on the activities of the Combined Forces Command, the top U.S.-South Korean warfighting headquarters on the Peninsula. Yoon then ate lunch with U.S. and South Korean troops, including soldiers assigned to the U.S. Army’s 2nd Infantry Division.

In one of the photos, Yoon is seen disembarking from a Republic of Korea Air Force (ROKAF) VH-92. A VH-60P is also present, described as “an escort helicopter” that supported the mission. Both aircraft wear the smart dark blue and white color scheme that’s common to the ROKAF’s rotary VIP fleet.

The ROKAF was among the first military operators of the Sikorsky S-92 family, placing a contract for three examples with Sikorsky in 2005. The helicopters, head of state transport versions of the commercial S-92A Helibus, were chosen in preference to the AgustaWestland EH101, a type now known as the Leonardo AW101.

The first VH-92 for the ROKAF was completed at Stratford, Connecticut, in 2006 and began test flights at the factory before going to China Lake, California, for further trials, including of its defensive countermeasures suite. Self-protection gear includes ‘disco ball’ infrared countermeasures on top and below the fuselage, countermeasures launchers at the rear, and various missile warning sensors all around the aircraft.

The trio of VH-92s, as the type is officially designated by the ROKAF, were officially handed over during a ceremony at the Seoul Airshow in October 2007.

Since entering service, the helicopters have received some upgrades, including enhancements to their navigation systems, making them better able to operate in poor weather and in limited visibility. This upgrade added electro-optical/infrared sensors in a turret below the nose and improved moving-map displays.

The VH-92s took over the presidential transport role from the ROKAF’s VH-60P fleet, although the latter type remains in service with the same unit, the 257th Airlift Squadron, dedicated to VIP duties and with both fixed-wing and rotary assets stationed at Seongnam Air Base near Seoul.

The VH-60P was the first Black Hawk variant acquired for the ROKAF, with three being ordered in 1990. The same year, a license production agreement between Sikorsky and Korean Air led to a Black Hawk line being opened in South Korea. This has mainly completed UH-60s for the Republic of Korea Army, but has also produced HH-60P combat search and rescue variants for the ROKAF, plus some additional VH-60Ps.

A total of five VH-60Ps are thought to have been modified as such by Korean Air, beginning in 2002. The modification work included new seating, cabin soundproofing, and comprehensive communications equipment. The locally modified VH-60s have the same sliding passenger doors as found on the standard Black Hawk, unlike the Sikorsky-built VH-60s, which have outward-opening doors. An example of one of these original VH-60s accompanied Yoon on his visit to Camp Humphreys.

The current status of the locally modified VH-60Ps is unclear, with some reports that they may have been returned to UH-60P utility transport standard. There have been suggestions that these ‘de-modded’ aircraft may be used specifically to escort the presidential VH-92, with two of the Black Hawks carrying members of the Presidential Guard, and a medical team, respectively.

Last week’s visit, however, suggests that it’s at least possible that the original VH-60Ps are also being used in a support role, too, or perhaps as a backup that retains higher-end capabilities in case the primary helicopter experiences an issue. Whatever their status, these earlier aircraft also clearly retain self-defense systems, too, including prominent infrared countermeasures.

Alongside these two Sikorsky designs, the ROKAF also continues to operate some older Aérospatiale AS332L1 Super Pumas, delivered in the late 1980s and also previously used for presidential transport. By 1999, the three aircraft had been replaced in this role by the VH-60P, but two survivors are still used to transport the defense minister and other high-ranking military officials.

All in all, the ROKAF’s VIP helicopters are in keeping with the high-end nature of this part of the service’s transport fleet. On the fixed-wing side, meanwhile, the 257th Airlift Squadron has two specially adapted CN235M twin turboprops with luxury interiors and improved communications suites, a Boeing 737-300 with a bespoke interior, and, most impressively, a leased Boeing 747-8i for longer-haul presidential trips. The VVIP Jumbo Jet has additional security and communications features, as well as a missile detection and countermeasures system.

With the VH-92 now well established in ROKAF service as a presidential transport, observers might be forgiven for questioning why the U.S. military is having such difficulties bringing its own VH-92A into service.

However, the ROKAF’s three helicopters are significantly less complex machines than those being procured to serve with Marine Helicopter Squadron One (HMX-1), and with different operational requirements. The Korean aircraft are essentially S-92s outfitted for the head-of-state mission, while the Marine VH-92A is a purpose-built aircraft specifically for the U.S. military’s most critical VVIP mission, based on the S-92 airframe. Not only are the VH-92As required to transport the U.S. president and other officials but they are also expected to undertake emergency contingency flights, potentially like those associated with the critical continuity of government mission.

Keeping the U.S. president safe and connected to the National Command Authority and others in the chain of command even during a nuclear crisis is a very challenging requirement that a country like South Korea, with no nuclear arsenal, does not have to deal with. Without it, America’s nuclear deterrent is not as assured.

The aircraft also has to be electrically hardened for operating in a nuclear environment. Beyond that, there are plenty of other differences. The countermeasures suite on the U.S. VH-92A is also far more advanced, for instance. It includes multiple directional infrared countermeasure (DIRCM) turrets, among other modifications.

Currently, the White House and the U.S. Marine Corps are still apparently working out whether the VH-92A is fully ready to be put into operation, while the U.S. Naval Air Systems Command (NAVAIR) test office last September described the new helicopter as “failing to meet the reliability, availability or maintainability threshold requirements” required of it.

It was, in particular, the aforementioned highly-demanding continuity of government mission set that was one main area where the VH-92A was deemed to be falling short. It had significant issues with its Mission Communication System (MCS).

In the meantime, successive improvements have been made to the MCS on the Marine VH-92A, while other problems related to “instability, cabin interior flaws, frequent maintenance inspections, and rear air-stair door components” have also since been addressed.

Other issues, such as concerns that the VH-92A’s engine exhaust and rotors could cause damage to the White House South Lawn, where Marine One routinely operates from, have also emerged, with the net result that, as of today, the White House Military Office has not yet approved a first presidential flight with the new helicopter.

At one time, it had been hoped that the Marines would declare initial operational capability (IOC) for their VH-92A in June 2020, a date that was successively pushed back to January 2021, then July 2021. Until this milestone is achieved, the iconic VH-3D is soldiering on in the presidential transport role, supported by the Black Hawk-based VH-60Ns, which are also scheduled to be replaced by the VH-92A.

In the meantime, the Marine VH-92A has at least been declared suitable for routine “administrative” missions, including shuttles to Camp David or conveying the president to Joint Base Andrews outside Washington to connect with a preplanned Air Force One flight.

For the time being, the Marine VH-92A is some way off justifying its $5-billion program cost, while, on the other side of the world, the ROKAF VH-92, admittedly a much less complex machine, has now recorded almost 15 years of successful presidential transport operations.

Update, April 25: Following the publication of this article, the U.S. Navy has confirmed that, in fact, the Marine Corps did declare initial operational capability (IOC) for their VH-92A in December last year, a fact that we were previously unaware of. The information was provided to us by Megan Wasel, PAO PEO(A) — Air ASW, Assault and Special Mission Programs.

We have since reached out to the Navy for more details about where the program is now and to what degree the VH-92A is actually ready to perform the presidential airlift mission. We hope to be able to provide more information about the status of the program in the near future.