The U.S. Capitol building, among others, was briefly evacuated after an alert about an aircraft presenting a “probable threat.” 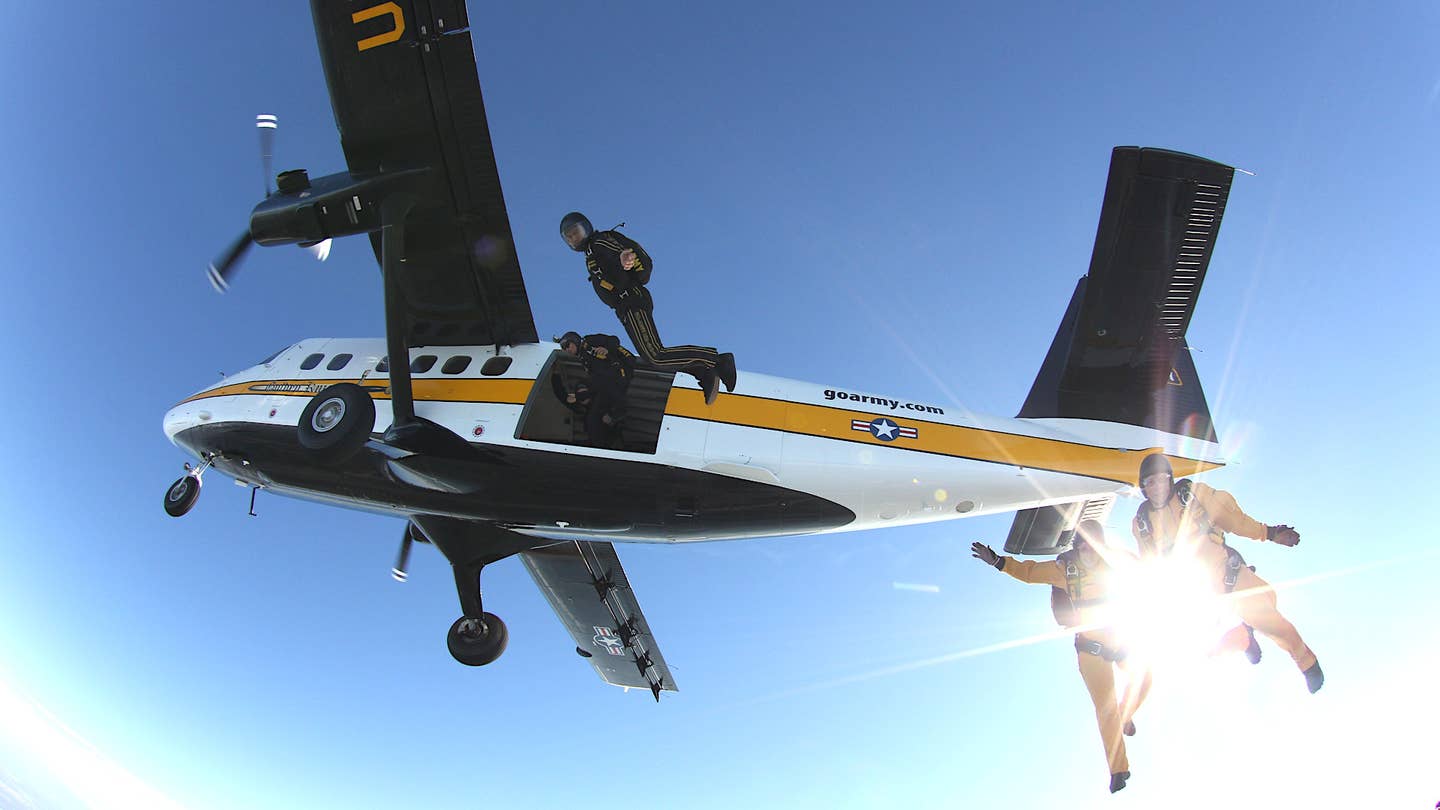 The U.S. Capitol Police briefly ordered the evacuation of the Capitol building, various associated office buildings, the U.S. Library of Congress, and the U.S. Botanic Garden this evening over what was originally described as an "aircraft that poses a probable threat." There are now multiple, though still unconfirmed reports that some kind of miscommunication regarding the flight of a U.S. Army UV-18C Twin Otter aircraft carrying members of the Golden Knights parachute demonstration team, who dropped into tonight's baseball game at Nationals Park, triggered the alert.

The initial evacuation order appears to have gone out around 6:30 PM local time. U.S. Capitol Police (USCP) then issued a statement saying that "the Capitol was evacuated out of an abundance of caution this evening" and that "there is no threat at the Capitol" at around 6:48 PM.

The airspace over Washington, D.C., along with much of the surrounding National Capital Region (NCR), is extremely tightly controlled, and in most cases completely off-limits. A variety of radars and other sensors are in place to monitor for potential threats, including low and slow-flying aircraft. Fixed-wing fighter jets and helicopters can be scrambled and ground-based air defenses activated to respond to any potential hazards that get detected. You can read more about all of this here.

Exactly what happened tonight remains unclear. At the time of writing, USCP has promised additional details, but does not appear to have issued a formal statement.

After the USCP's two announcements about the incident, various individuals on social media quickly pointed out that the Army UV-18C, with the serial number 10-80264 and using the callsign GKA264, was the only aircraft in the sky over Capitol Hill visible through various online flight tracking sites.

Multiple outlets, including the AP and CNN, have since reported, citing unnamed officials, that the UV-18C was indeed responsible for the evacuation of the Capitol and other nearby buildings, but also said their sources had specifically mentioned the involvement of a "single-engine plane." The Twin Otter is a twin-engine design. This discrepancy may simply reflect an ongoing scramble to determine how this case of mistaken identity occurred.

There are already strong indications that miscommunication or a lack of communication at some level was a central factor in what happened tonight. Oriana Pawlyk, an aviation reporter for Politico, wrote on Twitter that no fighter jets were scrambled despite USCP saying there had at one point been an aircraft posing a "probable threat," nor was commercial air traffic in the region disrupted. She also said that U.S.-Canadian North American Aerospace Defense Command (NORAD), which manages air defense activities across the airspace of both countries, said that the Army's flight occurred entirely as planned.

Though USCP has not issued an official statement, there are certainly indications that it was not informed about the Golden Knights' flight tonight. At the same time, the AP has reported that USCP was not alone in initially acting as if there was a real threat to the Capitol. "Multiple federal agencies began scrambling officials as the plane circled overhead," the wire service said in its report.

If it is confirmed that the Army UV-18C triggered this alert because certain federal law enforcement agencies were not properly informed, it could be embarrassing to all involved. The Pentagon cited major breakdowns in communications between various military and law enforcement entities as particularly serious issues in the responses to protests over the results of the 2020 Presidential Election and an ensuing riot on Capitol Hill on January 6, 2021, in a report issued last fall.

There is, of course, still the potential that the Army Twin Otter, or another aircraft quickly determined to be benign, accidentally triggered an alert in some other way. Another air scare occurred over Washington, D.C., in November 2019, which turned out to be the result of a radar tracking issue, as you can read more about here.

Whatever the story ultimately turns out to be, it will all but certainly prompt investigations and other post-mortems to determine if there were indeed communications or other issues and that they are rectified to the fullest extent possible.

Speaker of the House Nancy Pelosi, a Democratic Representative from California, has issued a strongly worded statement regarding tonight's incident, which she says was "outrageous and inexcusable" and caused "unnecessary panic." She further indicated that the Federal Aviation Administration (FAA) was responsible for the communications breakdown, but provided no additional information about how that occurred.

Plane spotters have now been able to locate publicly available recordings of the Golden Knights' UV-18C talking with air traffic controllers at Ronald Reagan Washington National Airport. The audio makes clear that there was significant confusion at least at the airport's control tower about how the flight was supposed to proceed.

"I'm trying to hand you off … to figure out what exactly it is you're supposed to be doing, 'cause you're A) well above my altitude and B) this is helicopter," an air traffic controller can be heard telling the pilot of the Army plane at one point, referring at the end to the fact they are talking over a frequency that is only supposed to be used for communications with helicopters.

The FAA and the U.S. Army's Recruiting Command, the latter of which oversees the Golden Knights, have both now announced that they will be conducting formal reviews into the events that prompted the evacuation of the Capitol and other nearby buildings last night.

The FAA "takes its role in protecting the national airspace seriously and will conduct a thorough and expeditious review of the events this evening and share updates" and under that, "especially in our nation’s capital region, and we must communicate early and often with our law enforcement partners,” it said in a statement to the AP.

“We are reviewing all aspects of the event to ensure all procedures were followed appropriately to coordinate both the flight and the parachute demonstration," Kelli LeGaspi, a spokesperson for Army Recruiting Command, said in a separate statement to the AP.