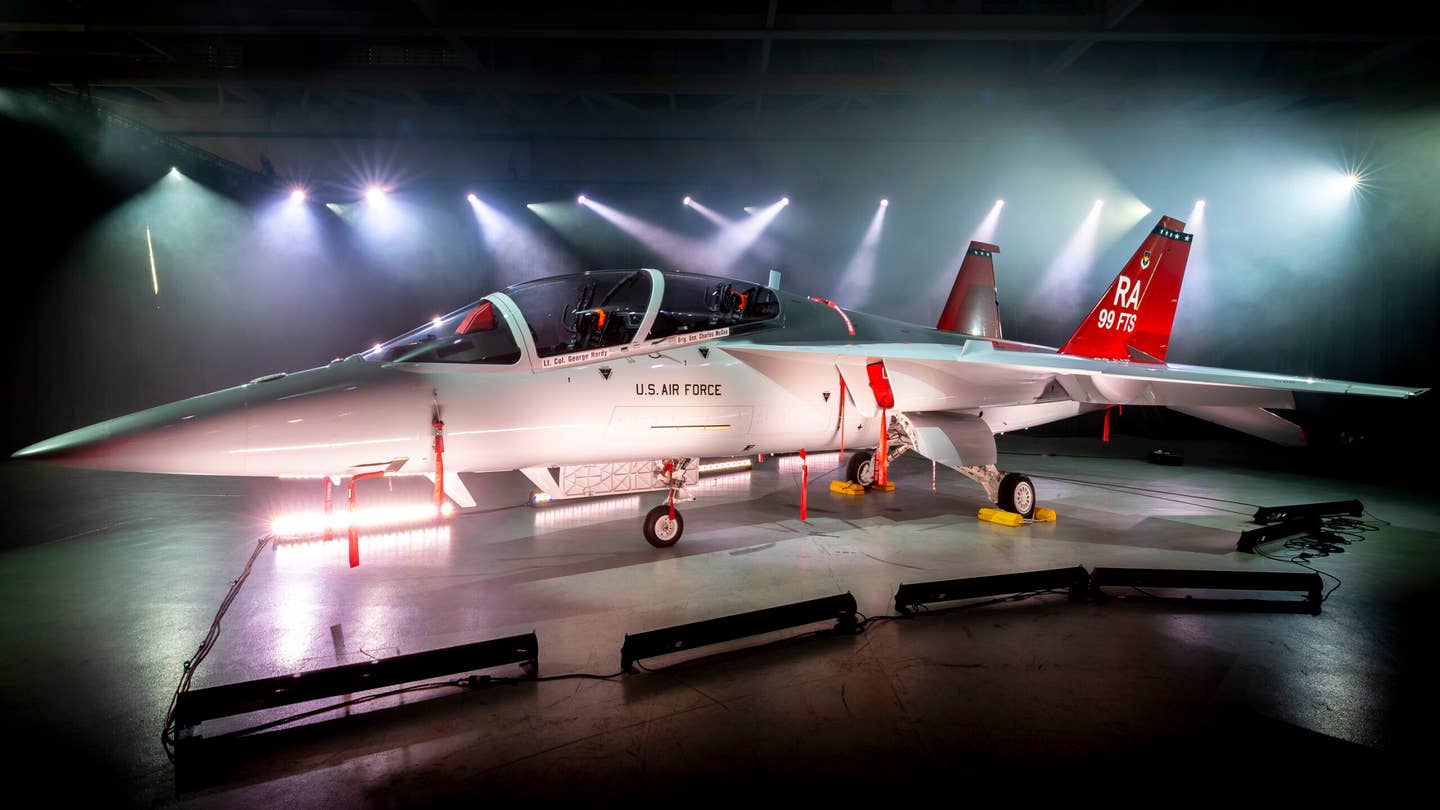 Boeing has rolled out the first T-7A Red Hawk built for the U.S. Air Force under the Engineering and Manufacturing Development (EMD) phase of the program. These jets are set to be the service’s first new advanced jet trainers since the T-38 Talon, which first took to the air more than 60 years ago. Significantly, this particular jet is the first true T-7A, the previous two aircraft being company demonstrators that were not necessarily representative of the final configuration.

Today’s rollout ceremony at the Boeing plant in St. Louis, Missouri, saw industry leaders and Air Force officials bring attention to the game-changing attributes that the T-7A is expected to bring to the training pipeline. The first of a planned 351 T-7As for the service, which Boeing bills as the first aircraft to be fully digitally designed, are due to be delivered to the Air Force at Joint Base San Antonio-Randolph next year.

“We’re excited and honored to deliver this digitally advanced, next-generation trainer to the U.S. Air Force,” said Ted Colbert, President and CEO of Boeing's Defense, Space & Security. “This aircraft is a tangible example of how Boeing, its suppliers and partners are leading the digital engineering revolution. T-7A will prepare pilots for future missions for decades to come.”

“Today is the culmination of years of work, design, and partnership between Boeing and Saab,” added Saab’s President and CEO Micael Johansson. “Saab’s knowledge and expertise contributed to the design and production of this world-class trainer, with more than a thousand Saab employees involved. Collectively we set out an ambitious vision: to redefine what a trainer jet is, but also how they are made, and we have succeeded.”

At the same time, the rollout ceremony had a strong emphasis on the legacy of the African American Tuskegee Airmen, the famed “Red Tails” of World War II, who are honored in the name and livery of the new trainer.

“The Tuskegee Airmen are one of the most celebrated units in our Air Force history, and the T-7A honors the bravery and skill of these trailblazers,” said Gen. Charles Q. Brown, Jr., Chief of Staff of the Air Force, in a Boeing media release. “Like the airmen, they were named and painted to pay homage to, the T-7A Red Hawks break down the barriers of flight. These digitally engineered aircraft will make it possible for a diverse cross-section of future fighter and bomber pilots to be trained and provide an advanced training system and capabilities that will meet the demands of today’s and tomorrow’s national security environment.”

Boeing and partner Saab are especially proud of the way that digital design, agile software, and digital engineering technologies have been harnessed to reduce the time between drafting the aircraft and getting it into the air for testing. The Red Hawk was the first Air Force type to be given the “e” prefix (becoming, for a time, at least, the eT-7), representing the use of this aggressive digital design philosophy.

Once in service, the aircraft is also expected to be much more adaptable than its predecessors, with open-architecture software expected to allow new capabilities and training elements to be inserted to keep pace with the modernization of the wider Air Force.

At this stage, the relationship between Boeing and Saab on the T-7A program sees the aft section of the trainer built by the Swedish company at its Linkoping facility. Before long, however, Saab will start manufacturing these components in the United States, at a facility in West Lafayette, Indiana.

For now, the first full-production T-7A for the Air Force will remain in St. Louis for ground and flight tests before being delivered to Joint Base San Antonio-Randolph where it will join the 99th Flying Training Squadron (FTS). This unit is currently flying the T-1 Jayhawk that trains pilots destined for the airlift or tanker communities but which is due to be retired in 2025. The T-7A, meanwhile, is scheduled to reach initial operational capability with Air Education and Training Command in 2024.

Despite the rapid progress made in getting the T-7A into the air, the program has suffered some delays that have resulted in Boeing taking a financial hit to the value of $367 million. There have been some problems with the aircraft, including a ‘wing rock’ issue that Boeing said last year that it had addressed with a software fix, plus production delays due to COVID-19-related parts shortages. As a result, the Milestone C full-rate production decision for the T-7A has now been postponed to Fiscal Year 2023.

As well as the prospect of export orders, something that we have looked at in the past, there is scope for the U.S. Air Force to buy many more than the baseline figure of 351 jets.

Late last year, it became clear that the Air Force is looking to add at least 100, and possibly hundreds more Advanced Tactical Trainers on top of the 351 T-7As that are covered under the T-X program. These new jets would likely not only be used for schooling pilots, but also as aggressor aircraft as an extension to the Adversary Air program, and as ‘tactical surrogates,’ allowing more operational-level training to be transferred from costly fighters onto a cheaper platform.

The service has said it will look at any potential contenders that fit the Advanced Tactical Trainer requirement, but the Red Hawk would appear to be very well placed for follow-on orders, as part of a wider effort to revamp Air Force fighter training.

Meanwhile, an adapted Red Hawk, known as the T-7B, is in the running for the U.S. Navy’s Undergraduate Jet Training System (UJTS) requirement, which is set to result in a wide-ranging overhaul of the way the service trains its Naval Aviators. The T-7B will be up against offerings from Leonardo and Lockheed Martin in the competition to replace the Navy’s current T-45 Goshawk advanced jet trainer.

And, as we have discussed in the past, the high-end performance of the T-7A also means the aircraft lends itself to further adaptation as a light fighter, which could potentially be exported abroad much like the F-5 was decades ago.

Clearly, the Red Hawk has the potential to add significantly to its existing Air Force orders. First of all, though, the service will be hoping that, once deliveries begin next year as planned, the T-7A lives up to its considerable potential as the driver of a broader modernization effort that should change the way the Air Force trains its future pilots.