For years the death of one of the Air Force’s top pilots near Area 51 remained cloaked in secrecy, but a new detailed report has just emerged. 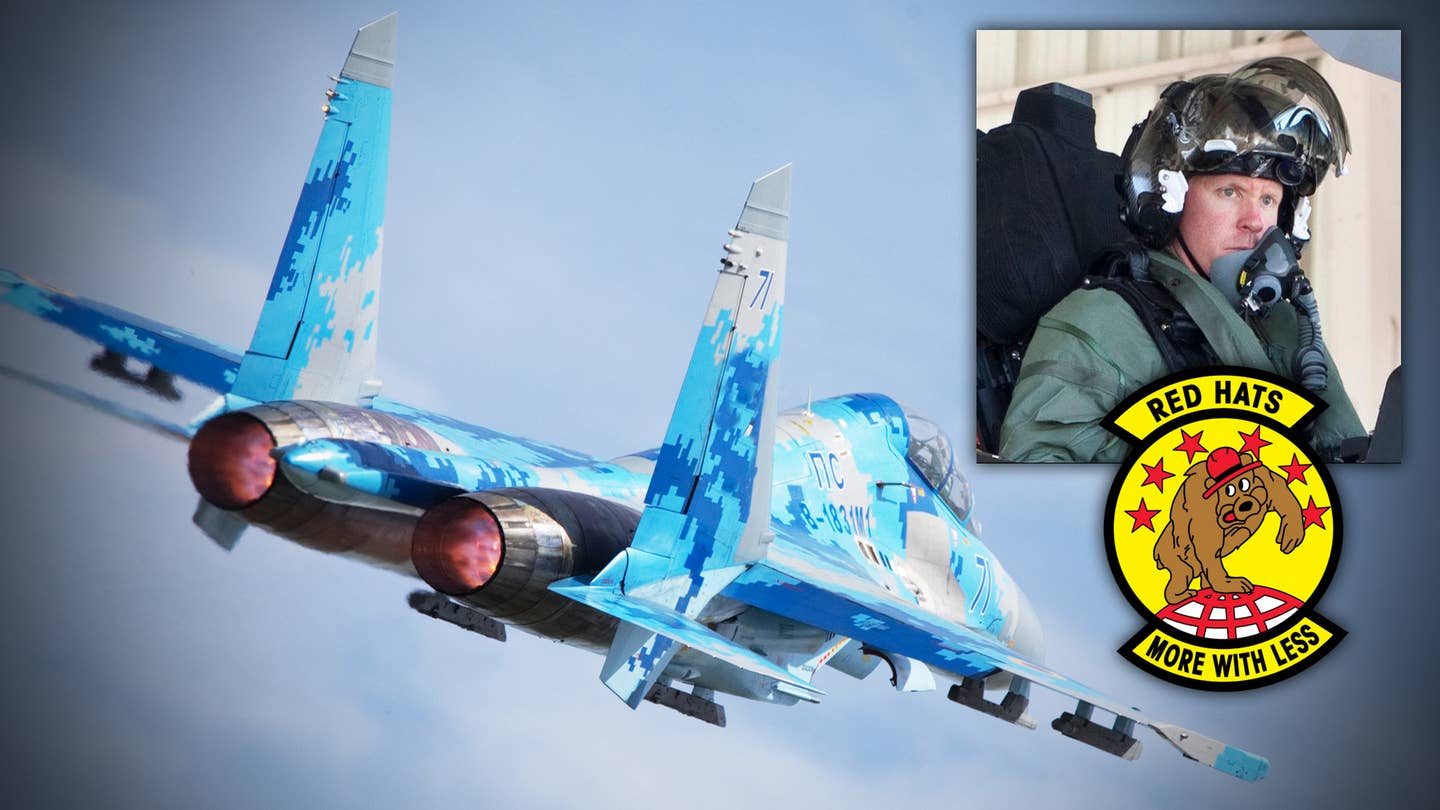 Back in 2017, U.S. Air Force Lt. Col. Eric "Doc" Schultz, a highly experienced and respected test pilot, died in a mysterious crash in the Nevada desert near Area 51. Afterward, it was speculated, among a number of possibilities, that Schultz was the head of a top-secret squadron, nicknamed the Red Hats, which is primarily tasked with clandestinely flying foreign military aircraft. The Air Force would not provide information of any kind about the incident itself, including what Schultz was flying at the time of his death, even in response to Freedom of Information Act requests. This resulted in a total void of information that has remained intact... until now.

In a new video on his YouTube channel 10 Percent True, author Steve Davies, who literally wrote the book on a once-highly classified program closely related to the Red Hats, the 4477th Test and Evaluation Squadron, or Red Eagles, gives an inside look into what happened to Schultz. Davies claims the story he tells is based on information he obtained from multiple first and second-hand sources, including individuals who believe that "Doc deserves his dues" for his life-saving actions during the deadly incident after nearly five years. He adds that a report from 2017 that claimed Russian test pilot Magomed Tolboyev had warned his Air Force counterpart against attempting certain maneuvers, implying somehow that recklessness on Schultz's part may have led to his death, was a major reason why his sources decided to share this story.

"It has taken some months to get as many details as I can, but now that I am publishing what I know I can tell you that one source has had the opportunity to comment on my writeup of the mishap, the other has read a high-level summary of it, and both have concurred that it is an accurate reflection of events as they unfolded," Davies says by way of disclaimer. "In my narrative, I don’t distinguish between which sources have said what. That is by design. And while it may not satisfy purists, it is a necessary step in order to protect the identity of the people who shared the story."

You can check out Davies' entire video presentation here:

"Doc" Schultz was not even supposed to fly on the day of the crash, September 5, 2017, according to Davies' sources. In his position as head of the Red Hats, he had dutifully taken the place of the pilot who had originally been scheduled to be in the front seat of the two-seat Su-27UB Flanker-C, who had been grounded due to unspecified medical issues. In the back seat was a Weapons Systems Officer (WSO), or "wizzo," from the U.S. Navy's Air Test and Evaluation Squadron Nine (VX-9) based at Naval Air Weapons Station China Lake in California, who survived the ensuing crash.

The mission that day was a "local area proficiency sortie" that lasted approximately 45 minutes. This is would have been a benign sortie for the Red Hats, which are thought to specialize in the test and evaluation, as well as other intelligence research, of foreign combat aircraft, a mission that is referred to as foreign material exploitation, or FME. The unit also provides high-end and highly classified foreign adversary air support.

The Red Hats first came into being in the 1970s to provide an entity dedicated to FME tasks on captured enemy aircraft. Eventually, a different, but equally secretive unit, known as the Red Eagles, focused on flying foreign jets as adversaries for American fighter pilots during training. It is understood that after 'disbandment' the two entities were unofficially merged together sometime in the 1990s and that the resulting unit flies both Su-27s and MiG-29 Fulcrums, and possibly foreign threat aircraft, from Area 51.

By the accounts provided to Davies, the flight that day was completely uneventful. It was when Schultz began to bring the Flanker back to the Area 51 test center at Groom Lake that problems arose.

"Schultz dropped the gear and checked the indicator lights in the cockpit, only to see two greens and one red: one of the main undercarriage legs was indicating as unsafe," Davies says. "Schultz declared an emergency - an action that threw the entire base into lockdown, per Area 51’s security protocol. Phone lines went dead, access gates were locked, and a Janet flight loaded with workers bound for Las Vegas was instructed to taxi back to the ramp and deplane."

Davies says Schultz flew by the Area 51 tower twice to try to get other eyes on the issue, with personnel on the ground telling him that his landing gear was indeed down and at least looked to be locked in place. An F-16 Viper fighter jet — a type that is a constant presence at Area 51 — had also been scrambled to act as a chase plane and help provide a closer aerial assessment of the situation.

The decision was subsequently made to have Schultz attempt a touch-and-go on the dry lakebed located a the northern end of the facility to test the landing gear. "This maneuver may not have been the schoolhouse solution, but it would have allowed him to see whether gear was actually locked down, and it could have saved an important national asset," Davies notes. "Choosing a lakebed would also keep Area 51’s main runway clear for the recovery of other assets that were airborne at the time."

While it remains unclear what the exact issue with the offending landing gear leg was, there clearly was one. When it touched the ground it collapsed and a part of it apparently broke off entirely.

The "jet settled to the ground, dragging a wingtip and yawing so dramatically that the aileron and horizontal stabilizer now also dug into the hardened sand," Davies explains. "With the aircraft of the precipice of a cartwheel, Schultz applied full rudder and maximum afterburner, wrestling the crippled jet back into the air."

Schultz succeeded in getting the damaged Flanker flying again, but the options for getting the plane back down safely were now much more limited. He was forced to abandon a subsequent plan to attempt a belly landing after finding that the aircraft's entire landing gear system had effectively failed and would now not retract.

"At this point, a controlled ejection was the only remaining option, and the Flanker was in any case now almost out of gas," according to Davies. "Such is the secret nature of assets flying from Area 51, several bailout areas are designated within its boundary."

After reaching the designated point and with the aircraft at an altitude of around 2,000 feet, Schultz and the WSO from VX-9 began the ejection sequence. The Naval Flight Officer punched out first and parachuted to safety with only minor injuries.

"Tragically, Schultz's bailout sequence failed," Davies explains. "His K-36 ejection seat left the aircraft, but man-seat separation never occurred – he was never released from the seat to fall back down to earth under a main parachute – and the seasoned fighter pilot and test pilot remained in the seat all the way to the ground. It is not clear whether he had time to attempt a manual separation from the seat, or whether the K-36 even allows this."

Davies says that a contingent from "Area 51’s Search and Rescue helicopter force" – almost certainly a reference to the base's unique HH-60U Ghost Hawk helicopters, which you can read more about here – found the WSO quickly after the crash. It took longer to find and recover Schultz's body.

With no brightly-colored parachute to help guide them to where Schultz had fallen, their search was initially delayed in part because of a mixup in identifying where the Flanker had come down. Search and rescue personnel had mistaken an existing patch of scorched desert floor, which Davies says was the result of a different incident involving the loss of a top-secret stealth drone known commonly as the RQ-180 in December 2016, for the new crash site. A search party on the ground ultimately found the remains of the Red Hats' commanding officer, who by every indication had died instantly when he hit the ground, the morning after the accident.

"In the months that followed, the Red Hats mourned the loss of their leader and were keen to lay on some fundraising events that might generate financial support for Schultz’s wife and five children," according to Davies. "However, there was so much media interest in the high-profile loss that their activities had to remain low-key. A piano burning at the back of the Nellis AFB 'O’Club' appears to have been the sum total of the public commemorations that took place."

Davies notes that the crash that killed Schultz was the first such incident, at least that is publicly known, within the Air Force's FME community since 1988 and the first one to have led to a fatality since 1982. He says it is also his understanding that the issue with the K-36 ejection seat that prevented the Red Hats commander from safely separating from the seat has been isolated and fixed on other Su-27s the Red Hats still fly. It's unclear whether the landing gear failure led to any other fixes on those Flankers or changes in maintenance or procedures.

"Three years later, folks from other programs at the test site created a special Red Hats patch for the unit," Davies offers as part of a postscript to the incident. "A very limited production run meant that the patches helped raise some funds for the family. Apparently concurrently, a golf tournament was also held, the website for which states that Schultz 'fought to the end' and saved someone’s life in the face of insurmountable odds."

"The Air Force clearly agreed and has posthumously awarded the Red Hats commander with the Distinguished Flying Cross," he continues. "I could not find a public record of the medal citation, although an unclassified version of it must surely exist. But [I] have been told that it was specifically for getting the Su-27 airborne again after it settled onto the desert floor and almost tumbled, giving both crew a chance of survival."

Davies concludes his video on this incident by saying that he has learned that the crash that killed Schultz prompted the Air Force to reassess the future of the Red Hats and that a decision was subsequently made to shut the squadron down and replace it with something else. Whether or not that has happened already, something that would be obscured publicly by the way the Air Force conceals the official existence of this unit, to begin with, is unclear.

"That’s a subject for a different episode," Davies says at the very end.

While Davies' account of the events surrounding the tragic loss of Eric Schultz is officially unconfirmed, and the anonymous sources he is basing his report on are his alone, if taken at face value, a completely new window into what actually happened in the Nevada desert near Area 51 on September 5, 2017 appears to have just been flung open.

In light of Davies' video, The War Zone has now reached back out to the Air Force for comment and to see if more information may now be available about the tragic incident.

This is what we got back from the Air Force in response to our detailed query:

Below is the information I have on the crash that occurred in 2017.

On September 5, 2017, at approximately 6:00 pm Pacific Time, a U.S. Air Force aircraft crashed while flying a training mission on the Nevada Test and Training Range approximately 100 miles northwest of Nellis AFB. The aircraft was assigned to Air Force Materiel Command. Lt Col Eric Schultz died as a result of injuries sustained in the accident.