Nuclear Bombs May Be Headed Back To The United Kingdom 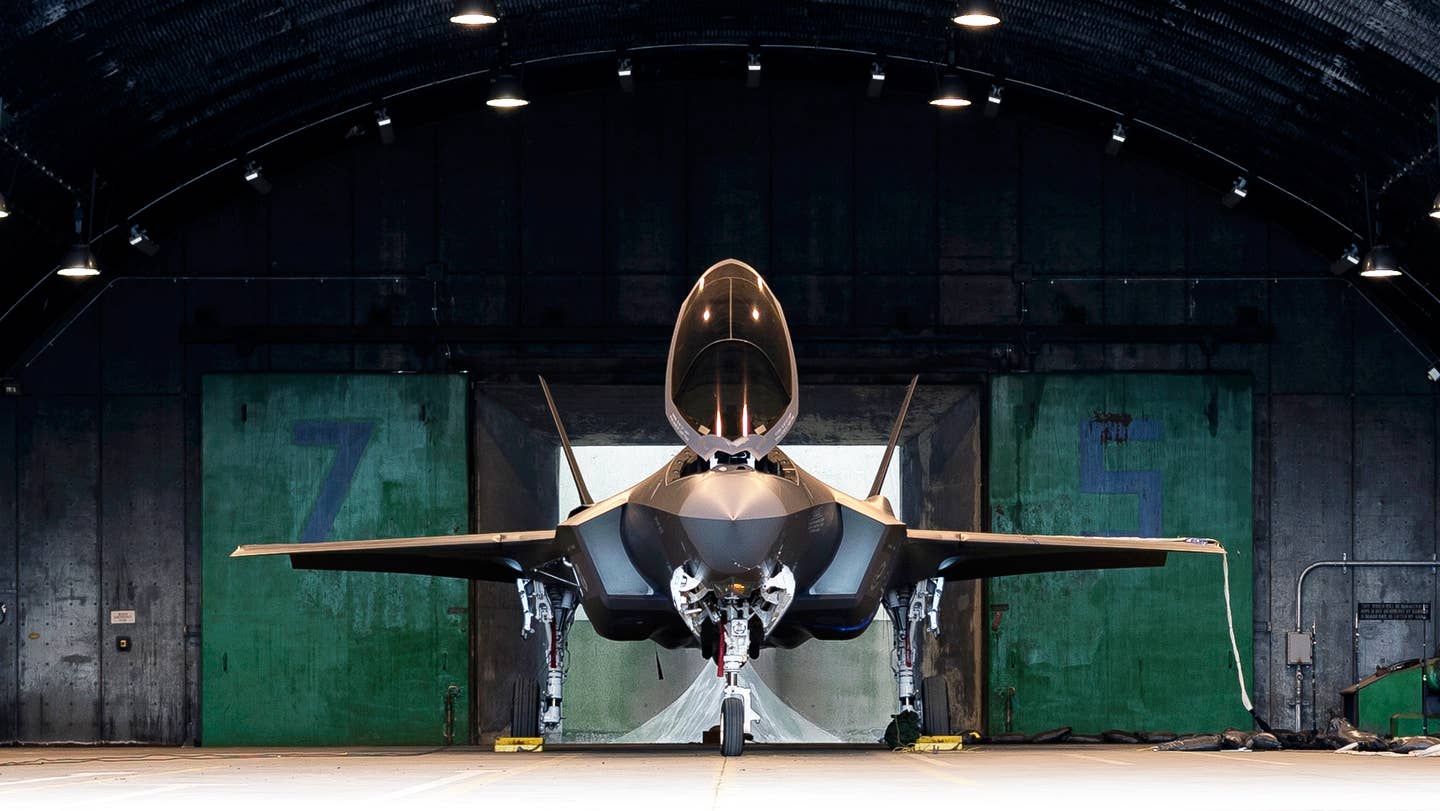 More than a decade after the United States withdrew its last nuclear bombs from the United Kingdom, the Pentagon’s latest budget request, for the 2023 Fiscal Year, suggests that weapons of this type may be heading back to British soil. While unconfirmed for now, such a move would provide the U.S. Air Force F-35A stealth fighters and F-15E Strike Eagle combat jets in the United Kingdom with immediate access to B61 bombs, including the latest B61-12 variant that boasts a precision-guidance package for much-enhanced accuracy.

The Federation of American Scientists (FAS) brought attention to a line in the FY23 budget request that describes upgrade work on nuclear weapons storage sites across Western Europe. As well as the existing sites at airbases in Belgium, Germany, Italy, the Netherlands, and Turkey, the latest budget request adds the United Kingdom to that list.

In the budget document, the nuclear bombs are referred to by the generic term “special weapons,” but there’s no question about what this alludes to. The Pentagon confirms that work is underway on the storage site upgrades at an overall cost to NATO of $384 million, over a 13-year period. Work is addressing “security measures, communication systems, and facilities”, according to the document.

Of course, there remains the possibility that the United Kingdom has been included in this list as the result of a simple clerical error — after all, until 2008, the country did host U.S.-owned nuclear bombs. That was part of a much wider relationship between the two countries that had seen U.S. nuclear weapons of different types based on U.K. soil since the early 1950s.

However, if the budget request is correct, then the return of U.S. nuclear weapons to the United Kingdom is a significant move.

It would mean that work is underway on secure munitions storage vaults at RAF Lakenheath, an airbase in eastern England that’s home to the U.S. Air Force’s 48th Fighter Wing. Traditionally an F-15 operator, the wing is in the process of trading its F-15C air superiority fighters for F-35As Joint Strike Fighters. The ultimately plans to base two F-35A squadrons at Lakenheath, alongside two more equipped with F-15E Strike Eagles that are already there. The F-35A and the F-15E are both being cleared to use the new B61-12 bomb. while the latter jets can already employ older versions.

The bombs would likely be stored in reactivated underground vaults, 33 of which were available at Lakenheath as of the 1990s, according to FAS. At the same time, 110 B61 bombs were estimated stored at the base, although there are no details about how many munitions would return there, providing that is the plan.

While the U.S. nuclear weapons stored in Belgium, Germany, Italy, and the Netherlands would be made available to the local air forces in times of conflict, the bombs at Lakenheath, should they return there, would be for the use of the resident 48th Fighter Wing.

Currently, the only other base with U.S. jets based alongside nuclear bombs in Europe is Aviano Air Base in Italy, which hosts U.S. Air Force F-16C/D fighter jets. There are additional B61s at Incirlik Air Base in Turkey, but American aircraft capable of employing them are not permanently based there.

Other bases in Belgium, Germany, Italy, and the Netherlands rely on local squadrons to put the ‘loaned’ weapons to use during a nuclear exchange or crisis.

As it is, the return of tactical nuclear weapons to the United Kingdom would almost certainly incur the wrath of the Kremlin, although it may be the case that U.S. officials have decided that the steady decline in relations between Moscow and Washington makes such a move mainly academic. Whatever the reason, the issue of nuclear weapons in Europe has seen criticisms thrown by both East and West in recent years and there has been something approaching a new arms race on the continent since the United States walked away from the Intermediate-range Nuclear Forces (INF) Treaty in 2019.

As it is, the B61-12 bomb certainly offers capabilities that make it more relevant to the current security environment in Europe than the earlier models of B61 that were available to the U.S. Air Force at Lakenheath until 2008.

When combined with the F-35A, the B61-12 is actually being viewed by the Air Force increasingly as a strategic weapons-delivery system, as well as being a tactical strike asset.

The key factors in this development include the increased accuracy of the B61-12, the result of its precision-guidance system, which combines a new tail kit with an inertial navigation system (INS) package and rockets for spin stabilization. Thanks to this guidance kit, the B61-12 can be dropped dozens of miles away from its target area, increasing the survivability of the launch aircraft.

If that launch aircraft is a low-observable platform, like the F-35A, the combination can be used to strike far better-defended targets than would be the case with a non-stealthy tactical fighter and an earlier B61 model.

The F-35A’s generous combat radius also helps to blur the distinction somewhat between a nuclear-armed tactical fighter and a more strategic type of nuclear-strike platform.

Providing forward-deployed U.S. Air Force fighters with a nuclear-strike option could be couched in terms of deterrence in Europe, especially in light of controversial Russian weapons such as the 9M729 ground-launched cruise missile. Indeed, cruise missiles like this, which can be launched from Kaliningrad, are one argument to expand the U.S. nuclear footprint in Europe, to improve survivability if they come under attack.

However, it’s notable that, from the Kremlin, at least, there’s been a new willingness to issue nuclear threats, however obliquely, against NATO. That would seem to suggest that the steady deterioration of East-West relations on the continent, which seemed to have reached a new nadir with the Russian invasion of Ukraine, is now also increasingly encompassing nuclear rhetoric as well. With that in mind, it’s unclear what effect reinstating a nuclear weapons storage facility in the United Kingdom might have.

On the other hand, President Joe Biden’s administration has so far walked a careful line in regards to nuclear posture, with an unwillingness to appear escalatory. Among the most obvious de-escalatory measures have been cancelations of pre-planned intercontinental ballistic missile tests, while the situation surrounding Ukraine remains tense.

However, there are now questions as to whether the forthcoming nuclear posture review will allow Biden to stick to pre-election promises. Indeed, U.S. officials have said that Biden has dropped an earlier pledge to use nuclear weapons only to deter a nuclear attack against the United States or its allies, and instead to consider using them for non-nuclear threats as well.

Despite this, Hans M. Kristensen director of the Nuclear Information Project at FAS, considers it likely that the Lakenheath move will not actually add any nuclear bombs to the current U.S. total in Europe. It will, however, provide the United States with more flexibility and survivability, both in terms of basing and the fact that B61-12s will likely be assigned to F-35As. Kristensen thinks the new weapons could be delivered to Europe next year, with a similar number of older-model B61s, namely B61-3/-4 versions, being withdrawn from other bases in Europe at the same time.

Another possibility, of course, is that Lakenheath will be prepared to receive B61-12s, but that the bombs won’t actually be stored there. This would fit in with the need for increased survivability, with the option of moving bombs around to different European bases. Indeed, keeping Russia guessing as to where B61-12s might actually be found in Europe could be an attractive strategy. Having one more base with B61s, and the farthest from Russian territory, also will provide better survivability should a nuclear crisis occur. It would also help bolster the United Kingdom’s own nuclear deterrence factor. This played a major role during the Cold War when the U.S. deployed thousands of nuclear weapons to Europe, including tactical jets in the United Kingdom that sat ready to deliver some of them at a moment's notice.

For now, officials in the United States and the United Kingdom are not revealing any more. However, if the budget document is to be believed, it would appear the permanent deployment of the U.S. Air Force F-35A in Europe could be even more significant than we expected. At the same time, it could be the case that the current East-West standoff on the continent is only going to become deeper and more complicated.

The F-35A is now on a trajectory to become fully certified to deliver thermonuclear weapons in the near future.