A U.S. Air Force RC-135U Combat Sent electronic intelligence aircraft conducted a flight in the past 24 hours along much of China's southern coastline that meets the northern end of the South China Sea. This sortie follows reports indicating a recent uptick in Chinese fighters harassing foreign surveillance and reconnaissance aircraft flying over international waters in the South Chinese Sea region and elsewhere in the Pacific recently. This includes an incident disclosed just this weekend involving a particularly dangerous intercept of a Royal Australian Air Force P-8A Poseidon maritime patrol plane by a Chinese J-16 fighter jet, which you can read more about here.

The RC-135U in question, which has the serial number 64-14849, flew its mission near areas of China's southern coast, including around Hainan Island and into the Gulf of Tonkin, on June 6, according to online flight tracking data. It is now June 7 in that part of the world. Hainan is home to the highly strategic Yulin Naval Base, the People's Liberation Army Navy's (PLAN) primary hub in the region and its main nuclear submarine base, where all of its ballistic missile submarines are homeported, among other things.

The route, which kept the aircraft in international airspace very close to Chinese territory the entire time, is similar to one that a U.S. Navy EP-3E Aries II, another electronic intelligence gathering platform, was flying along at the time of a now infamous collision with a People's Liberation Army J-8 fighter jet in 2001.

This same aircraft, one of just two RC-135Us in service, flew another sortie that took it similarly close to areas along much of China's central and northern coastlines on June 3. Both of these sorties were conducted from Kadena Air Base on the Japanese island of Okinawa.

We don't know for certain what the exact purpose or purposes of either of these recent sorties may have been. The Air Force's pair of RC-135Us are highly specialized platforms configured to collect a wide range of signals and other electronic intelligence. Unlike the service's larger fleet of RC-135V/W Rivet Joints, which have some similar capabilities, these aircraft are primarily employed in support of national-level technical electronic intelligence (TechELINT) requirements.

"Technical ELINT ... describes the signal structure, emission characteristics, modes of operation, emitter functions, and weapons systems associations of such emitters as radars, beacons, jammers, and navigational signals," according to an unclassified National Security Agency monograph. "A main purpose of TechELINT is to obtain signal parameters which can define the capabilities and the role that the emitter plays in the larger system, such as a ground radar locating aircraft, and thus lead to the design of radar detection, countermeasure, or counterweapons equipment. The overall process, including operation of the countermeasures, is part of electronic warfare."

Geolocating and categorizing radars and other signal emitters is an essential part of producing accurate “electronic orders of battle” regarding the air defense capabilities of adversaries or potential adversaries. The RC-135Us, which can process intelligence data onboard and transmit information in near-real-time, can also be deployed to support tactical-level operations in a contingency scenario, as well as perform various test and evaluation roles.

Though not necessarily common, in part due to the small number of RC-135Us to begin with, Combat Sent flights of these areas of the Pacific are a regularized occurrence. The Air Force, at least the in past, applied the nicknames Diamond Sent and Sapphire Sent, to sorties covering parts of the East China Sea and the South China Sea, respectively.

Last June, Combat Sent 64-14849 flew another very similar mission along China's southeastern coastlines, which also drew comparisons to the route of the EP-3E in the 2001 incident.

There is certainly no shortage of radars and other signal emitters of potential interest for an aircraft like the RC-135U along China's coastlines, and around Hainan's Yulin Naval Base in particular. Other U.S. military intelligence, surveillance, and reconnaissance (ISR) aircraft, including at least one U.S. Navy P-8A Poseidon maritime patrol plane fitted with a secretive radar pod, have been tracked flying similar routes in the past.

The route could also have given the RC-135U the opportunity to collect data on various Chinese assets to the south on Woody Island and in the Paracel Islands chain. The PLA has been actively expanding the size and scope of facilities on Woody Island and in the Paracels in recent years as part of a larger effort to build up its capabilities and general presence across the South China Sea. The region is now dotted with fortress-like and largely man-made outposts created from various previously uninhabitable shoals and reefs. The government in Beijing claims virtually all of this body of water as its sovereign national territory, something that the vast majority of the international community disputes.

A Tweet yesterday from the SCS Probing Initiative, a public flight and ship tracking effort run through China's Peking University in Beijing, further speculated that the RC-135U's proximity to the shore in its recent flights could give it the ability to collect data on targets deeper inside the country.

Routine or not, the general timing of these recent RC-135U sorties are notable for a number of reasons.

This weekend, the Australian government issued statements regarding what it said was a particularly dangerous intercept of one of the Royal Australian Air Force P-8As flying over the South China Sea by a PLA J-16 fighter jet back in May. The Chinese fighter cut across the path of the Australian plane and fired decoy flares and chaff, reportedly causing damage in the process, as you can read more about here.

Last week, Canadian authorities disclosed details about what they said were a series of dangerous intercepts of Royal Canadian Air Force CP-140 Aurora maritime patrol planes by Chinese fighters between April and May of this year. In those instances, the Canadian aircraft were flying much further to the north in support of an international mission monitoring North Korean compliance, or lack thereof, with United Nations sanctions.

Reported Chinese harassment of foreign ISR and other aircraft, especially those flying above international waters in the hotly contested South China, is not new, of course.

In addition, the RC-135U's appearance off China's shores follows a major PLA show of force aimed at Taiwan last week. A total of 30 Chinese military aircraft, including a mixture of 22 fighter jets of various types, as well as various airborne early warning and control aircraft, electronic warfare, anti-submarine, and ISR planes, flew into the southwestern corner of the island's Air Defense Identification Zone (ADIZ) on May 30. This was the largest number of sorties into this part of Taiwan's ADIZ since January 23, when 39 Chinese aircraft flew missions there.

The Chinese government has sent large numbers of military aircraft into this region of Taiwan's ADIZ, which is international airspace, in recent years. These large-scale flights typically come in response to actions on the part of the authorities in Tapei or their international partners, especially the United States, that the government in Beijing objects to. The May 30 sorties came days after U.S. President Joe Biden said that the United States would defend Taiwan against any attempt by authorities on the mainland to seize it by force, comments that drew a swift rebuke from the Chinese government and that were subsequently walked back by American officials.

U.S. military officials, as well as members of America's Intelligence Community, have said in recent years that they believe the PLA is working to put itself at least into a position where it would be confident in its ability to conduct a successful military intervention against Taiwan by 2027. U.S. authorities have also said that they don't believe that this necessarily means the government in Beijing will rush to launch such an operation at that time. At the same time, there has been much discussion about what Chinese officials might be taking away from the international response to Russia's invasion of Ukraine. The government in Beijing has been critical of sanctions and other actions taken in response to Russia's aggression, but has so appeared to provide only limited to Moscow.

No matter what, RC-135U 64-14849's recent flight along China's coastlines in the South China Sea, as well as the preceding one near areas further north, underscore the U.S. military's clear interest in having the most up-to-date and detailed information possible about Chinese radars and its integrated air defense system as a whole, across this highly strategic part of the world. 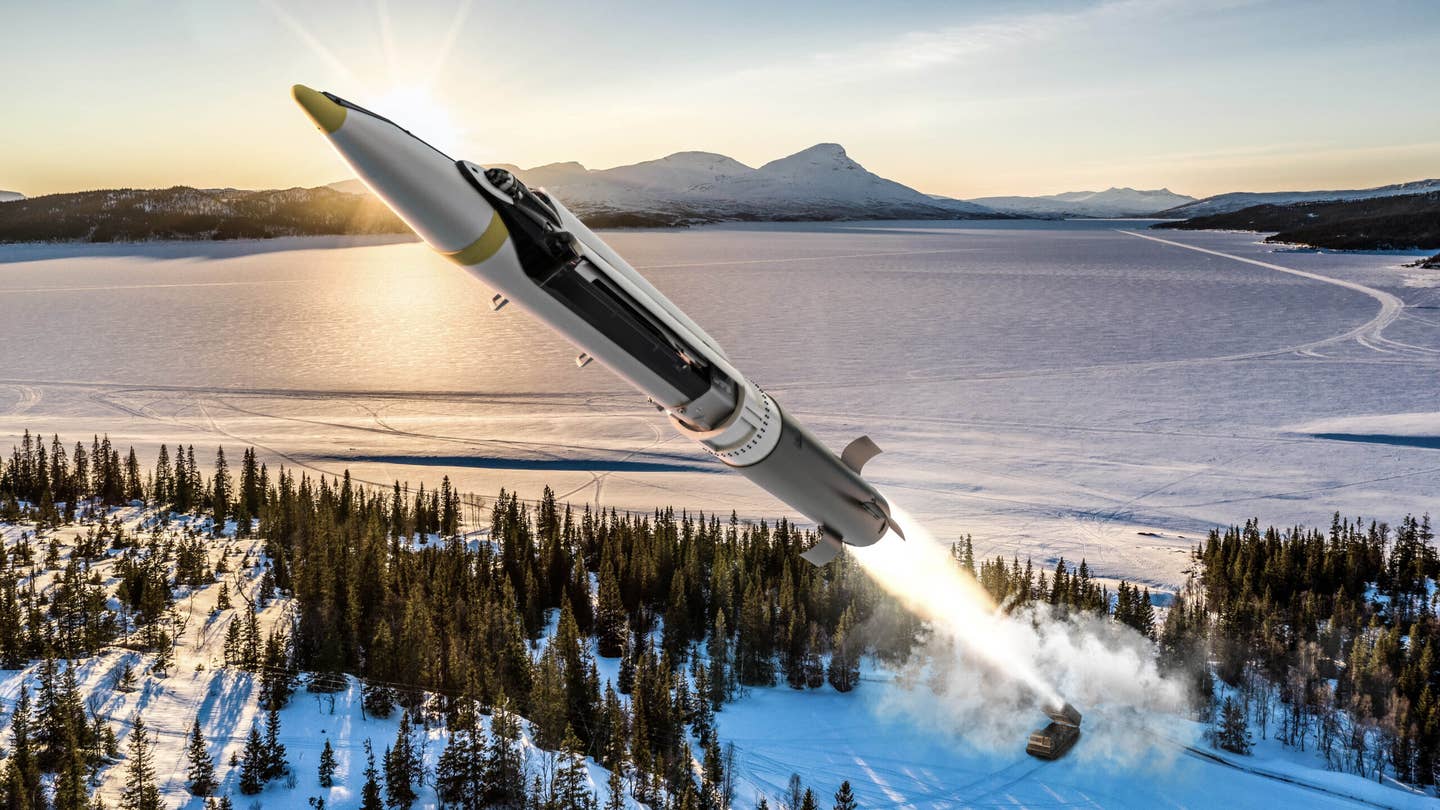 Ukraine needs more long-range strike weapons and delivery of the Ground-Launched Small Diameter Bomb could be poised for approval.

Leftovers are even better…