On the night of May 3rd, 2017, two Su-35S fighters, without an visible missiles, escorted a pair of Tu-95MS Bear bombers to within 50 miles of Alaska. An A-50 Mainstay radar plane was also in the area at the time, but remained well clear of U.S. territory. Two F-22s quickly flew to meet the incoming Russian planes. Unnamed sources told Fox News, which first reported the incident, that the Raptors were already airborne on patrol near Chariot, Alaska when they were ordered to intercept. The Russian flight may have been spurred by America's massive and highly sensitive Northern Edge exercise that is currently underway in the region.

CNN later said American officials downplayed the intercept as routine and uneventful. This is hardly the first time the Raptors have intercepted Russian aircraft near America’s coastlines. In April 2017, F-22s, along with Canadian CF-188 Hornet fighters, conduct four similar intercepts in as many days. E-3 Sentry AWACS planes have helped direct some of these operations from the air.

"We haven't seen this sort of level of activity for a couple of years," John Cornelio, a spokesman for the U.S.-Canadian North American Aerospace Defense Command (NORAD) told CNN after the last of the April interceptions. He made sure to add that the flights were not “unprecedented" or "unusual."

There has been a notable increase in these flights since 2014, when Russia forcibly annexed Ukraine’s Crimea region. In response to this aggression and the Kremlin’s subsequent revanchist moves elsewhere in Ukraine and in Syria, the United States and its NATO allies stepped up surveillance operations and training exercises along Russia’s western borders. At the same time, Moscow accelerated bomber patrols along America’s borders.

In addition, in 2014 and 2015, the Kremlin had even sent out bombers towards Alaska with older members of the Flanker family as escorts. However, the May 2017 flight was the first time in over a year any Russian fighters had accompanied bombers on one of these excursions.

Regardless of the relative frequency of these operations, the May 2017 meeting is still significant, because it was the first time the Kremlin has decided to send its newest Su-35s out of one of these missions. Plane maker Sukhoi delivered the first of these production Flanker-Es to the Russian Air Force in 2012.

Compared to older Su-27 and Su-30 aircraft, the Su-35s have small refinements in their overall shape, new engines, and updated avionics and sensors. Though still a fourth generation design, Russia says Flanker-Es can supercruise (fly faster than the speed of sound without the use of afterburner) for extended periods and potentially launch missiles while doing so. This tactic would impart additional speed on a weapon at launch, making it harder for opponents to evade them. On the other end, improved, independent 3D thrust vectoring could make the jets even more maneuverable adversaries.

On top of that, the aircraft has a quick-scanning Irbis-E passive electronically-scanned array (PESA) radar and an electro-optical system that includes a laser range finder and long-range infrared search and tracking capabilities that stealthy fighters cannot hide from. On top of that, the jets reportedly have a powerful electronic warfare suite to jam and confuse hostile radars. Taken together, the Russians have boasted, without much in the way of public evidence, that this combination could allow the jets to better detect low-observable jets such as the F-22 and F-35.

But with less than 50 of them in inventory, the Russian Air Force has deployed them sparingly and observers often see their presence as a message.  In February 2016, two months after Turkish F-16s shot down a Russian Su-24 Fencer attack aircraft along the border with Syria, the Kremlin made a very public display of sending a detachment of Su-35s to Hmeymim Air Basein Syria's Latakia province. In December 2016, Flanker-Es arrived at Russia's Air Base in Karelia near the Finnish border. This followed Finnish President Sauli Niinistö's meeting with NATO Secretary General Jens Stoltenberg to discuss regional security concerns, including Russia's increasingly aggressive foreign policy, to the alliance's headquarters in Brussels, Belgium.

So, their appearance off Alaska is notable in spite of the routine. By sending its most advanced jets on these patrols, the Kremlin might be attempting to show it can project power on par with the U.S. military. If nothing else, it would seem to suggest a desire in Moscow to expand its newer, advanced military capabilities into more traditional roles.

Of course, the chance of an actual show-down between the F-22 and Su-35S remains low at the moment. Only Russia and China operate the Flanker-E and while U.S.-Russia relations may be cold, there doesn’t appear to be any immediate threat of a conflict on the horizon. Its important to note once again that American Raptors have also been flying in Syria in support of the war on ISIS, but it is unclear if the two aircraft have ever encountered each other in that theater. It is probably safe to say that the F-22s have even if the Su-35s didn't realize it at the time.

In a real fight, the existing Raptors would have many advantages of their own beyond their stealthy features, including the aircraft's AN/APG-77 active electronically-scanned array (AESA) radar, AN/ALR-94 electronic support measures package, and data links to garner additional details about the battlefield from other aircraft and to share their tactical "picture" with wingmen in other F-22s.

The F-22 is an amazingly sensitive "sponge" when it comes to sucking up electronic emissions. If the Russians used their radars, and especially if they did so at full capacity, the Raptors would have been able to detect those emissions and they could be exploited by intelligence analysts and used for future electronic threat library updates.

As a result, the Americans may actually have gotten more out of the May 2017 exchange. It is all but certain that the F-22s were flying with external fuel tanks, radar reflectors, or both. These would have prevented the Russian pilots from getting a good sense of their low-observable characteristics. It is customary for the Quick Reaction Alert Raptors in Alaska to be outfitted with external tanks at all times.

And although the Su-35S are very capable fighters, the Raptor is only getting more deadly. As The War Zone reported in March 2017, the Raptors now have the ability to shoot the AIM-9X Sidewinder short-range dogfighting missile, but still lacks a helmet-mounted display to take full advantage of the weapon’s capabilities. On April 18, 2017, F-22s with the 411th Flight Test Squadron fired a number of AIM-9 and AIM-120 missiles at BQM-176A target drones over the Utah Test and Training Range as part of the Increment 3.2B upgrade program, which the Air Force has billed as "biggest capability upgrade since reaching Initial Operating Capability in December 2005."

But Russia has expressed an interest in increasing exports of the Su-35S. In November 2016, Indonesia selected the Flanker-E as the winner of tender to replace the country’s aging F-5E Tiger II aircraft, though it has not yet finalized the deal. In February 2017, the United Arab Emirates signed an agreement with Russian state arms broker Rostec for an unspecified number of aircraft. Russian authorities and Sukhoi have also pitched the aircraft to Algeria, Brazil, India, Malaysia, and South Korea in the past, among others.

The wider proliferation of such an advanced design could only be of concern to the Pentagon, especially as it works its way through the troublesome F-35 program and has no plans to restart production of F-22s. Nowhere has this been more apparent than in the U.S. Navy and Air Force’s choice of new paint schemes for their aggressor aircraft, which play the role of enemies during training exercises.

It seems safe to say, whatever Russia's intent was in sending the Su-35s near Alaska, the F-22 and other American fighter jets are likely to have more interactions with these advanced Flankers, whether they belong to Russia or not. 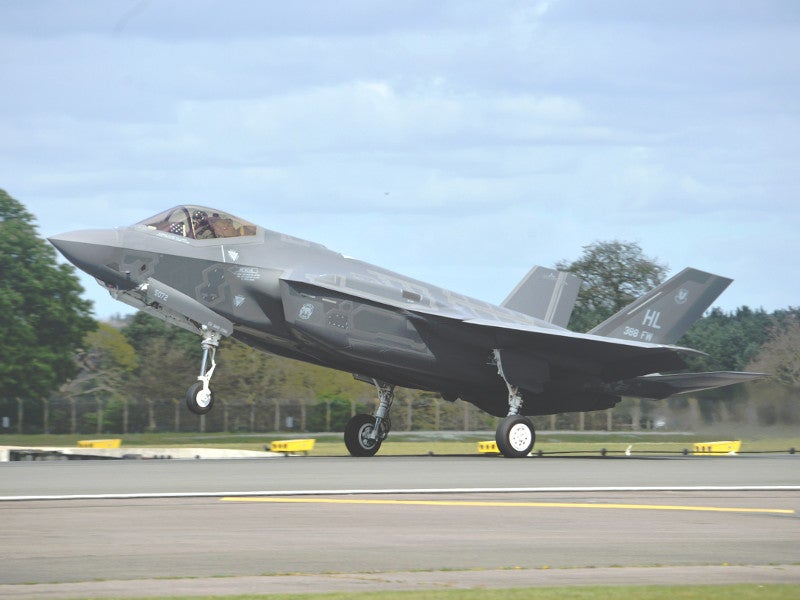 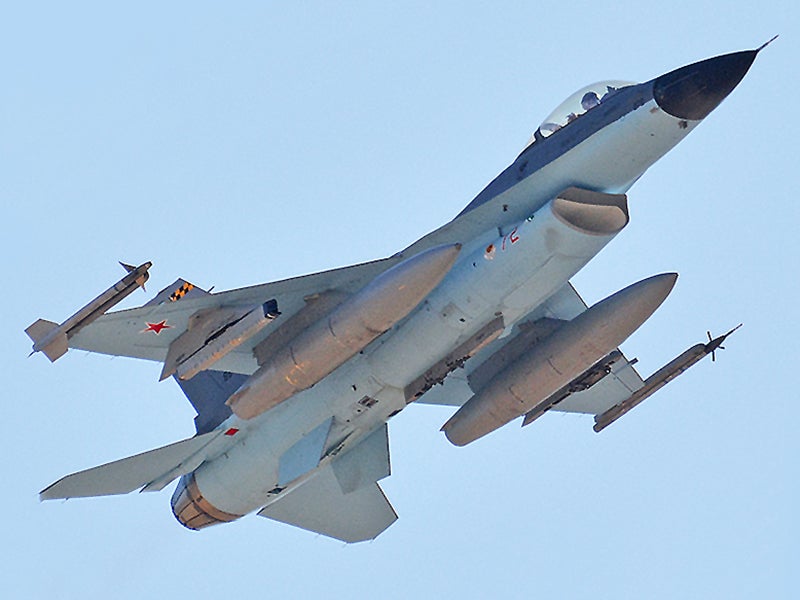 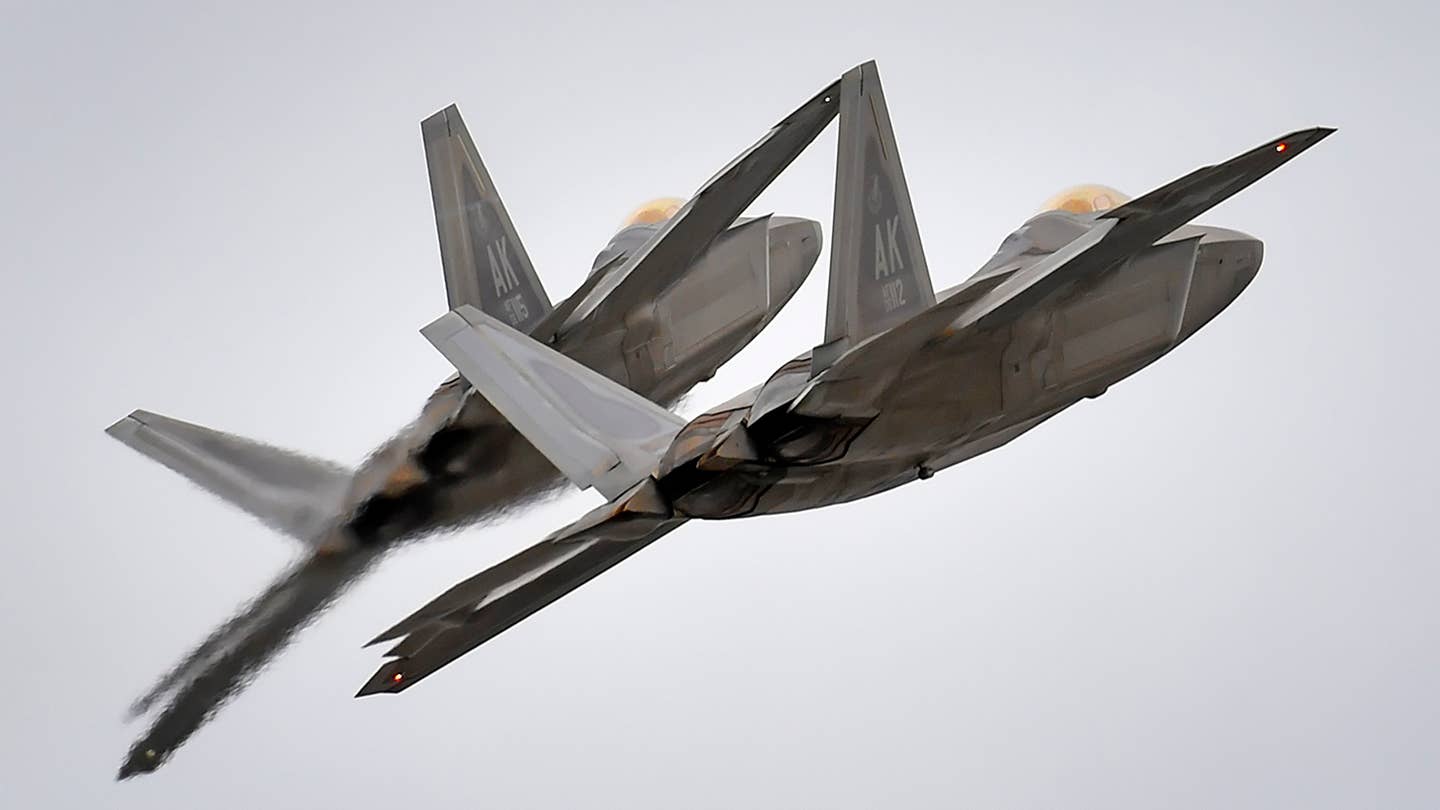