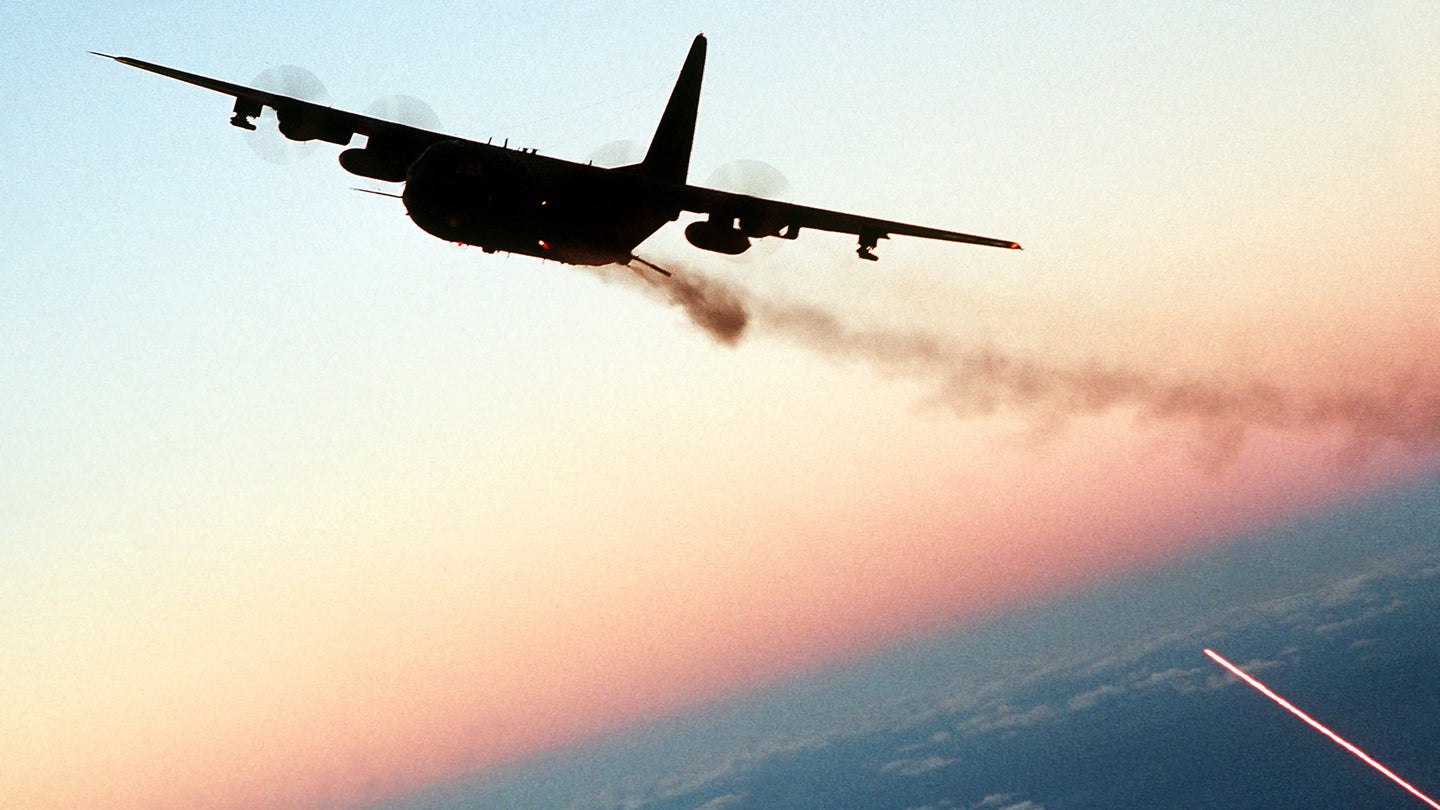 After more than four years, the U.S. Air Force has shown off one of its first AC-130W Stinger II gunships to carry a 105mm howitzer. After initially making the controversial decision to leave it out of the plane’s weapons load out, based on combat experience and user feedback, the Air Force smartly reversed course and rushed to fit the massive cannon onto the aircraft.

Air Force Special Operations Command (AFSOC) brought the upgraded gunship to Warner Robins Air Force Base in Georgia as part of a ceremony to thank the base’s maintenance depot for all its hard work. Among other aircraft, the Warner Robins Air Logistics Complex supports the command’s AC-130 gunships and MC-130 special operations transports.

What the work at Warner Robins “allowed us to do is to test” aircraft like the modified Stinger II, Air Force Major General Eugene Haase, AFSOC’s vice commander, told the assembled personnel. “You can see the 105 gun there in the back, which is new.”

Haase said this particular AC-130W, Spectre 67, was one of an unspecified number of Block 20 Stinger IIs, which are the final “full up round” configuration for the type. In addition to the 105mm howitzer, these W-model gunships have a 30mm automatic cannon and the ability to launch GPS- or laser-guided AGM-176 Griffin missiles and GBU-44/B Viper Strike and GBU-39/B Small Diameter Bomb (SDB) glide bombs.

In November 2010, Warner Robins delivered the first iteration of the new gunship, then known as the MC-130W Dragon Spear. The aircraft was a sub-variant of the specialized MC-130W Combat Spear cargo aircraft, which was itself a derivative of the standard C-130H Hercules. AFSOC pursued the program in order to quickly get more gunships into service without having to wait for all-new aircraft to arrive. The Dragon Spear conversion involved relatively modular weapon and sensor packages – referred to as the Precision Strike Package (PSP) – which maintenance teams could install with a minimum of work.

After receiving the newly armed MC-130W, the Air Force promptly sent the plane off to Iraq to support American troops and their Iraqi partners as part of Operation New Dawn. At the time, the gunship’s only gun armament was the 30mm cannon. Its primary weapon was the 33-pound Griffin. In addition, the aircraft had two turreted day- and night-vision cameras, advanced communications gear, and data links to coordinate and share information with ground troops.

For a period, the Air Force considered buying a stockpile of PSPs so it could simply convert MC-130H and W special operations airlifters as necessary. But while AFSOC was happy with the Dragon Spear concept, it quickly became clear the “modular” package wasn’t necessarily so and had more limited capabilities compared to the gun-armed AC-130H Spectre and AC-130U Spooky II, which both had a powerful 40mm cannon and the 105mm howitzer.

Another issue was that the only squadron with MC-130W, the 73rd Special Operations Squadron, remained focused on special operations airlift rather than traditional gunship missions like armed reconnaissance and close air support. During the Dragon Spear’s initial deployment to Iraq, the crew found themselves still hauling cargo in addition to their new missions.

On top of that, the Air Force had only just started buying the ammunition and some of the munitions associated with the PSP. “Manning challenges centered on the Dragon Spear’s munitions and shortage of weapons used by the aircraft to include the 30 millimeter (mm) ammunition, special operations precision guided munitions (PGM), and small diameter bombs (SDB),” AFSOC explained in its annual historical review for 2010, which the author previously obtained via the Freedom of Information Act.

The command responded by changing tack and focusing making the Dragon Spear into a dedicated attack platform, working to expand its arsenal. In 2012, they renamed the aircraft the AC-130W Stinger II and ultimately acquired a fleet of 12 planes. The 73rd officially transitioned to a gunship squadron.

In November 2012, an AC-130W dropped its first SDB in combat. That same month, another aircraft test fired an AGM-114P-2 Hellfire missile. Lockheed designed this variant of the iconic laser-guided weapon specifically for high-altitude launches from unmanned aircraft like the MQ-1 Predator. However, this launch envelope also made it ideal for the Stinger II. None of this addressed the limited gun armament and the new gunships began looking more like flying bomb trucks.

Historically, the benefit of the side-firing gunship concept has been the aircraft’s ability to fire very precisely at specific points on the ground. With a gun, crews could shift their focus to new targets much faster than with missiles or bombs and lay down a much higher volume of fire, too. As it stands now, the AC-130W's wing pylons can only carry eight SDBs or Hellfires, though crews can reload the aircraft's Griffin missile launcher in flight. And cannon shells and artillery rounds are just cheaper than precision guided munitions. An 105mm high-explosive round costs approximately $400, while a Hellfire missile can cost up to $100,000, depending on the variant.

From the Vietnam War onward, well-trained gunship crews repeatedly demonstrated their ability to destroy relatively small enemy concentrations while leaving the surrounding areas untouched, even in densely packed urban areas. After its introduction on the AC-130E Pave Aegis gunship in 1972, the airborne 105mm howitzer proved itself to be both particularly deadly and accurate.

So, in February 2012, AFSOC had also kicked off a program to add a new, palletized version of the 105mm cannon to the AC-130W. The project, nicknamed Dragon Fire, would make sure the weapon was ready for the up-coming AC-130J Ghostrider, too.

Despite the obvious desire for this weapon, the development moved slowly and in public the Air Force initially seemed non-committal. In the face of budget cuts imposed by sequestration, the service may have just wanted to focus time and money on other priorities. As of 2013, as it continued testing the system, AFSOC insisted that only some AC-130Ws and Js would carry the howitzer and that crews would only fit the weapons as necessary.

But in January 2015, Air Force Lieutenant General Bradley Heithold, then head of AFSOC, confirmed he was personally pushing to add the 105mm cannon to both the AC-130W and AC-130J. In an interview with Breaking Defense, he outlined plans for the gunships and future armament options, though he didn’t say how many aircraft he ultimately wanted to have with the big guns.

“An AC-130 is a precision strike platform in itself,” he explained. “It precisely delivers very low yield munitions with a 30 [mm gun] and a 105… and they’re very inexpensive to deliver.”

During the discussion, Heithold only used the Block 20 nomenclature to refer to notional howitzer-armed AC-130Js. However, given Haase’s comments, it appears this nomenclature may actually apply to any gunship that carries the PSP. It remains unclear how many howitzer systems the Air Force plans to buy. In January 2017, the Block 20 AC-130J prototype “Angry Annie” fired its first rounds from the 105mm howitzer.

At the same time, the Air Force is pursuing new precision guided munitions and other weapons to add to the gunships in the future. In October 2016, the AC-130J dropped its first Laser-guided SDB in a test run over White Sands Missile Range in New Mexico. The service expects the up-coming Small Diameter Bomb II to be an option for gunships, as well.

And Heithold said in 2015 that proposed Block 40 aircraft might even carry a directed energy weapon, such as a laser or a microwave beam. These systems offer the potential for aircraft like gunships to carry a scalable weapon that can attack very specific targets on the ground, avoiding collateral damage and only causing as much damage commanders desire. In theory, they could operate in a less-lethal mode that causes no lasting damage at all.

In addition, they could ease AFSOC’s logistical burden, since they don’t require a steady stream of ammunition to keep firing. With the technology steadily becoming more efficient and physically smaller, the Air Force plans to start tests by 2018 and hopes a feasible energy weapon will be ready for AC-130s by 2020.

But, for now, it looks like the 105mm howitzer will continue to be a heavy-hitting and cost-effective part of the AC-130’s arsenal.