After the Pentagon's shuts down its existing mission, it will replace it with a much broader operation that could still help finish off the brutal group. 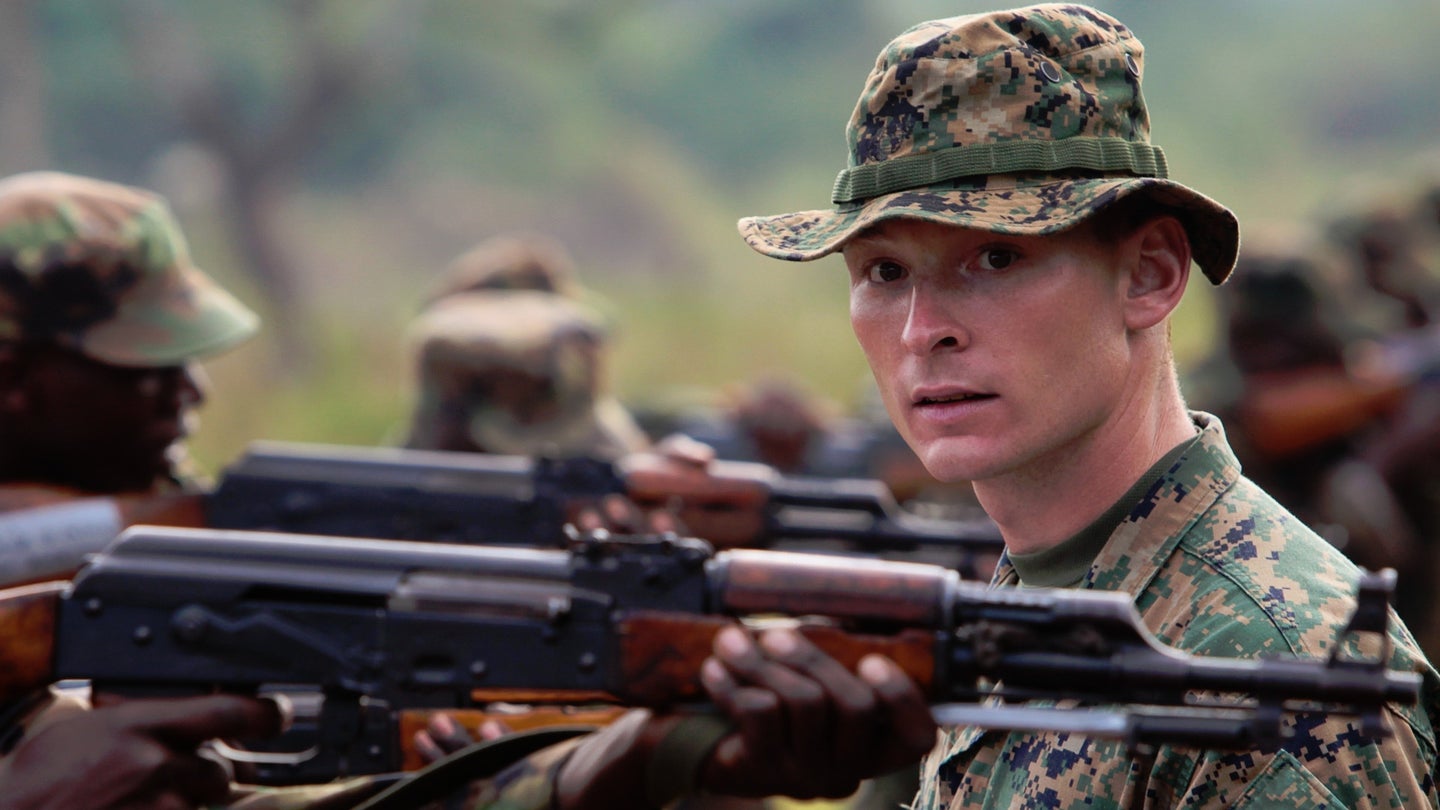 The United States is in the process of shutting down its military operation hunting for notorious rebel leader Joseph Kony – or is it? The Pentagon’s plan is to create a broader regional mission to respond to regional security threats and the remnants of his Lord’s Resistance Army (LRA) certainly qualify.

On Oct. 12, 2011, President Barack Obama announced he had dispatched special operation forces to central Africa to help countries in the area neutralize the brutal rebel group, capture its enigmatic leader Kony, and bring him to justice. In an Email to The War Zone, a U.S. Africa Command (AFRICOM) spokesperson says this effort, known as Operation Observant Compass, will officially come to an end in September 2017.

“Where the group once boasted nearly 2,000 fighters, efforts of the African security forces, with U.S. advice and assistance, have reduced the group's active membership to under 100,” AFRICOM public affairs official Robyn Mack explained. “As a result of this success, the USAFRICOM-led counter-LRA mission known as Operation Observant Compass, will remove U.S. military forces and transition to broader scope security and stability activities that continue the success of our African partners.”

AFRICOM quietly announced this decision at the end of March 2017, but did not include the mission’s final timeline. Reports followed about American troops redeploying either within the region or out of the area entirely, mistakenly believing the operation had already come to a complete close.

Of course, the move to shrink or shutter the effort has been on the U.S. military’s mind for some time. Shortly after the mission kicked off, Assistant Secretary of Defense for International Security Affairs Alexander Vershbow had insisted to House Foreign Affairs Committee members that the operation would only last “months” and wouldn’t “go on indefinitely.” When it finally wraps up, Operation Observant Compass will have lasted for more than five years.

“When I first got here the guys who put the programs together for theater security, they came in and you looked at them like, ‘Man we are spending a lot of money here [on Kony],’” U.S. Army General David Rodriguez told Stars and Stripes in April 2016. “It’s over $100 million every year.”

“We are at a point in time where we need to transition that mission,” U.S. Marine Corps’ General Thomas Waldhauser, Rodriguez’s successor, explained to the outlet seven months later. “The number of fighters in that whole organization has gone way, way down to the point where it is almost [at] insignificant levels.”

There’s significant evidence to support this position. By the beginning 2017, it was true that, while notorious, Kony’s group had already been dwindling in both size and influence for more than two decades.

“LRA fighters have proven themselves highly mobile over the years, exploiting ungoverned spaces in a volatile region to stage abductions and regroup,” the January-March 2017 edition of Special Warfare, the U.S. Army Special Operation’s Command’s official magazine, explained. “Fewer than 200 LRA rebels are still active in parts of Central Africa, where they operate in jungle terrain that covers the size of France.”

Ending a reign of terror

When the organization came into being in Uganda in 1987, the predominantly ethnic Acholi rebels could point to legitimate grievances. The year before, Yoweri Museveni had won the civil war that followed the ouster of dictator Idi Amin.

Museveni – who has been president ever since and won the latest presidential election in 2016 despite widespread accusations of rigging and voter intimidation – promptly moved to consolidate power and attack rivals. Innocent civilians and ethnic minorities found themselves in the crossfire and many formed militias to fight against the new central authorities. One of these was Alice Auma’s Holy Spirit Movement (HSM), the predecessor to the LRA.

Though there hasn’t been an official confirmation, Kony may be related to Auma and certainly used this connection to garner prominence in the HSM. The LRA’s nominally Christian-inspired beliefs are clearly an outgrowth of her preaching. Auma also claimed to be a spirit-medium, taking on the nom de guerre Lakwena, who she said was the soul of dead Uganda military officer she had channeled to help her cause.

Kony ultimately came to espouse similar supernatural abilities, building his own Christian syncretist millenarian cult and effectively branding himself as a messianic figure imbued with the power of the holy spirit who could lead the Acholi people to great victory. Auma ultimately distanced herself from this new LRA due to its violent methods, but the group was able to attract many of the HSM’s Acholi membership who wanted to take greater action against the government in Kampala.

What Kony actually touched off was almost 15 years of brutal fighting, during which the LRA became internationally known for burning villages, killing the adult residents, and kidnapping the children to serve in various roles, most notably fighters and sex slaves. The rebels abducted hundreds of children during this period. In 1994, the Ugandan government attempted, but failed to cut a peace deal and end the group’s reign of terror.

Afterwards, Ugandan authorities turned to a two-prong strategy of counter-insurgency operations and amnesties, with mixed results. What was clear was that Kony’s repeated atrocities had begun to turn off many of his supporters. In addition, animosity between Uganda and Sudan had led the government in Khartoum to offer safe haven to the LRA in the 1990s. As a result, the rebels had begun mainly operating outside of Uganda itself.

Fast forward to 2011 and LRA bands had largely turned to criminality, roving areas of the Central African Republic, Democratic Republic of Congo (DRC), and newly independent South Sudan. The fighters were sustaining their operations through theft and poaching, including killing endangered species in under-protected nature reserves, such DRC’s famous Garamba National Park.

So, though the group had shrunk significantly, defeating the LRA continued to be a cause célèbre among locals and international humanitarians in Africa’s Great Lakes Region. Most notably, in 2012, Invisible Children, an international group seeking to raise awareness about the rebels and their victims, released a controversial viral online campaign called “Kony 2012” that called for his capture and prosecution at the international criminal court.

Shifting to a broader operation

But as Rodriguez noted in 2016, the Pentagon was never entirely sold on the mission. “That’s not that important to us,” was how he described the response from his subordinates in charge of planning regional missions. As part of Operation Observant Compass, American special operators did gather and share intelligence information with the African Union's Regional Task Force (AU-RTF), coordinate logistics support, and conduct psychological operations pushing LRA members to abandon their fight and rejoin society. Separately, U.S. regular and special operations troops trained and advised African forces. With the Pentagon's support, the AU-RTF killed or captured four of five top LRA leaders, with only Kony remaining at large.

Still, there never seemed to be enough resources to support the mission with actual U.S. military assets. Flying from a forward operating base at Uganda’s Entebbe International Airport, contractor-operated cargo and surveillance aircraft, as well as helicopters, eventually became the key components of the American assistance mission. American forces and private contractors maintained a secretive infrastructure of small air strips, out-stations, and command centers to support the operations.

The Pentagon’s desire always seems to have been for a broader presence in the Great Lakes Region that could respond to various crises and work with partners to improve security throughout the area.  Sometime in 2013, AFRICOM renamed the main American element at Entebbe, which had been called the AFRICOM Counter-Lord’s Resistance Army Control Element (ACCE), to the much more generic sounding Special Operations Command Forward-Central Africa (SOCFWD-CA). This brought the moniker in line with the command’s two other regional special operations units in east and north and west Africa, both of which were running general theater security cooperation missions – Operations Octave Shield and Juniper Shield respectively.

There is definitely no shortage of security challenges in the area for this reformulated unit. In 2012, rebels overthrew the government in Central Africa Republic, leading to a series of civil conflicts. International peacekeepers are still trying to provide space for a long-term resolution to the fighting, which has led to at least 5,000 civilian deaths and driven more than 400,000 people from their homes.

Since December 2013, another civil war had raged in South Sudan after President Salva Kiir accused Vice President Riek Machar of attempting a coup. Both men had fought together in the country’s struggle for independence from Sudan. And then there’s the persistent violence in the Democratic Republic of Congo’s eastern provinces, where various rebel groups have consistently challenged the authority of the country’s central government. In January 2017, armed fighters crossed over the border from Uganda, threatening to rekindle tensions in the resource-rich North Kivu province.

On top of that, political upheaval has taken a number of violent turns in Burundi since 2015. Despite this being the issue that touched off the crisis in the first place, in December 2016, President Pierre Nkurunziza said he still intended to run for reelection if the country’s legislators pursued changes to the country’s constitution and removed presidential term limits and “if the people request it.” In 2015, Rwanda also controversially changed term restrictions after a national referendum, enabling long-time leader Paul Kagame to potentially remain in power until 2034. There have been concerns this could eventually spark a similar dangerous impasse in that country.

Don't forget about the LRA

Those involved in the fight against the LRA aren’t particularly thrilled about having to share already limited resources with all of these other potential hot spots. There are fears, especially in Uganda where memories of the group’s atrocities are still fresh, the shift in focus could give Kony and his followers space to rebound, too.

“Now that the Uganda government is stopping the search for LRA, it might become a mercenary force that can be used by any other groups to terrorize civilians,” Norbert Mao, a Uganda politician and former chairman of the country’s heavily Acholi Gulu District, told the Guardian. “They can explode any time and if we keep ignoring them, we shall pay the price.”

“The LRA has always taken advantage of any lapses in combat to regroup and reorganize,” Lino Owor Ogora, head of the Foundation for Justice and Development Initiatives, based in Gulu, told IRIN. “It would be unfortunate if the LRA returned because they were allowed too.”

However, a broader regional focus doesn’t mean the Pentagon would automatically stop supporting its Great Lakes partners in fighting the LRA regardless of whether or not the group is truly on its way to a final defeat. Any central African security strategy simply could not ignore the group’s continued activities, which are a prime example of the dangerous nexus of trans-national criminal enterprises and terrorism.

“It is also important to note that U.S. military effort is only but one part of the counter-LRA effort,” Mack, the command spokesperson, explained in her Email. “AFRICOM remains committed to African partners and regional security, and we will continue to help strengthen partner nation defense capabilities through military-to-military engagements, programs and exercises in coordination with the Department of State and African partner nations.”

So, while Operation Observant Compass may be coming to a close, it seems likely that American special operators and other U.S. government agencies will continue to keep a close eye on the LRA, along with other regional issues. And keep an eye out for a new, standing regional counter-terrorism or security cooperation mission after things officially shut down in September 2017.