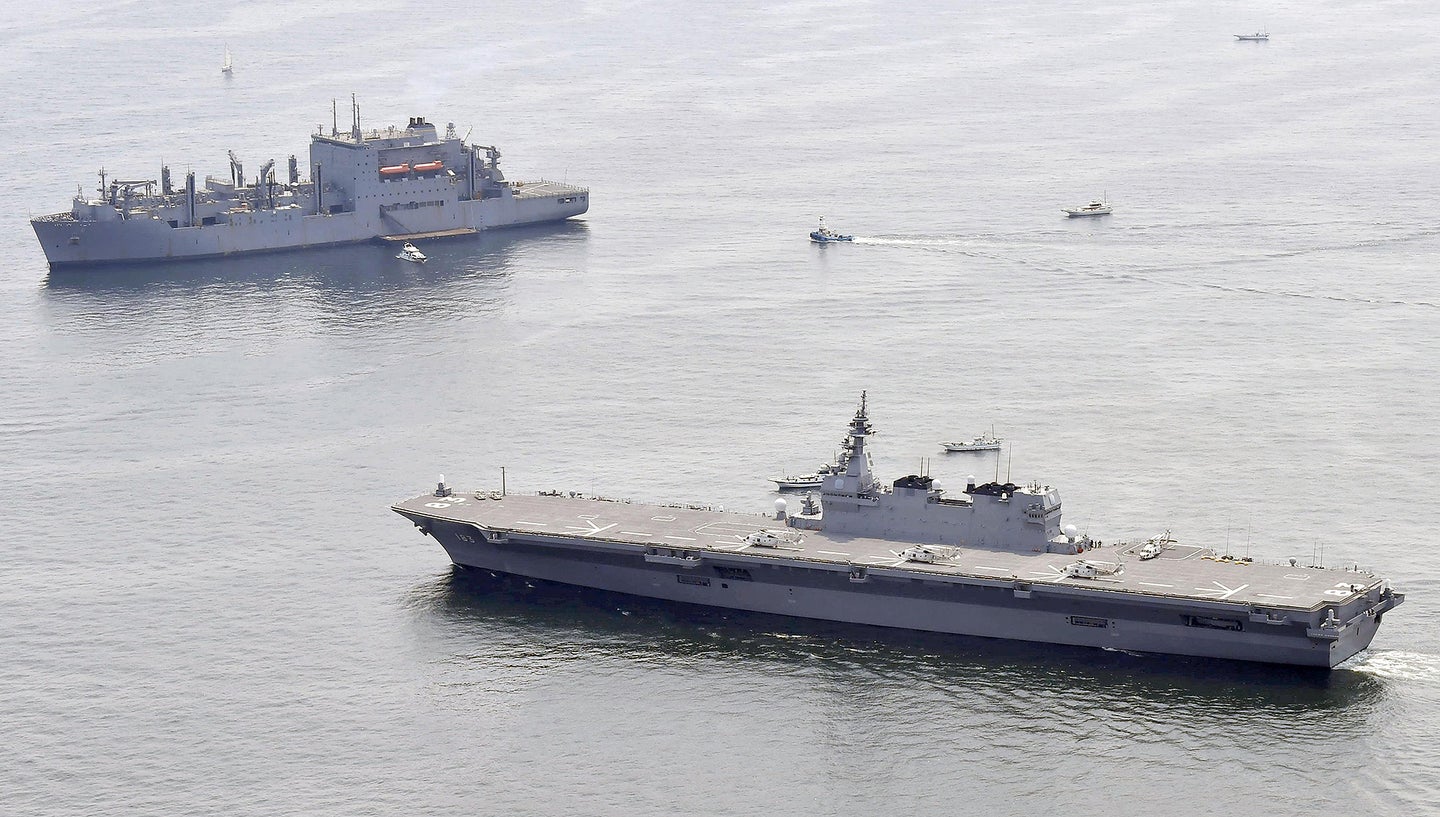 Japan is deploying its newest and largest helicopter carrier, the Izumo, to escort a US supply vessel from the waters off Tokyo south, and possibly into the Sea of Japan. There it is supposedly tasked to rendezvous with vessels associated with the Carl Vinson Carrier Strike Group. At that time it is highly possible that the Izumo will also join the growing armada of vessels exercising off the Korean Peninsula in an effort to put increasing pressure on North Korea and possibly to contain or respond to additional missile and nuclear tests ordered by the Kim Jong Un regime.

The mission sounds somewhat odd, as US supply vessels traverse the region without escort regularly, but this is likely more of a show of force and an exercise in interoperability among allies than anything else—although there is clearly a naval threat posed by the North Koreans. The mission also underlines the reality that during a time of war, especially against a peer competitor, there would be few sea lanes in the region that won't be under threat, especially from attacks by lurking enemy submarines.

Without a constant stream of consumables, spare parts, jet fuel and other materials, America's supercarriers and amphibious assault ships become useless liabilities, and the phalanx of escorts that protect them rely on copious amounts of fuel to remain on station. "Logistics win wars," as they say, and keeping America's vast array of supply ships moving safely to where they need to go would be a major priority and a major challenge if conflict were to break out in the region.

This is where the Izumo can be useful. The carrier is especially adept at working as a anti-submarine warfare platform, with the ability to create a large screen around the ships it protects via its embarked sub-hunting helicopters. It can also provide mine sweeping, surveillance, command and control and other capabilities in addition to additional fuel carriage—especially aviation fuels—which can be pushed to other assets like guided missile destroyers.

Although the Izumo class is far larger than its predecessor, the Hyuga class "helicopter destroyer," the smaller Hyuga class is really a better fit for the job of independent escort duty. The Hyuga class ships displace 19,000 tons fully loaded, while the Izumo class displaces up to 27,000 tons, and they carry fewer helicopters, 20 versus the Izumo's 28 (less are carried by both classes for normal ops). When it comes to length, the Izumo class also dwarfs Hyuga class class, clocking in at 814 feet versus 614 feet. Yet the Hyuga class features two Mark 41 vertical launch systems (VLS). This allows them to provide area air defense for themselves and any ships directly under their escort umbrella. The ship's 16 VLS cells are filled with RIM-162 Evolved Sea Sparrow Missiles (ESSMs), four of which can be quad-packed into a single VLS cell, and RUM-139 vertical-launch ASROC rocket propelled anti-submarine torpedoes.

These two weapons, along with its embarked anti-submarine helicopter force, give the Hyuga class the ability or defend itself and ships under its protective custody from submarine and air breathing threats at standoff distances. The vessel's ESSM capability also means Hyuga can sail into all but the highest threat environments without the need of a multi-billion dollar Aegis capable destroyer nearby.

The convoy escort mission eats up a lot of end strength, and the US Navy is not well setup for the realities of this unsexy but demanding mission set. Only US destroyers and cruisers can provide a credible anti-air capability, and there isn't enough of those multi-billion dollar ships to go around as it is. You can read more about this issue and a possible solution for it here, but the fact that Japan's Hyuga class can provide both very high-end anti-submarine capability and area air defense is a huge plus. It also means that ship can operate independently, without the need for an escort of its own.

The larger Izumo class does not feature a VLS system—it just has Rolling Airframe Missiles and Phalanx CIWS for close-in self protection. This is likely due to the idea that for most missions it will usually have destroyer escorts. This makes sense not just because of the size of these ships but also because they have more of a marine assault capability than their Hyuga class predecessors, with the ability to deploy with 400 Marines and roughly 50 light vehicles at the ready. And just because Japan's SH-60 and MCH-101 maritime helicopters makeup the ship's primary air wing, the massive Izumo can deploy anything in the Japanese Self Defense Forces rotary-wing arsenal. This includes everything from Chinooks to Apaches, giving the ship an over-the-horizon heavy lift and strike capability if needed.

North Korea presents no real fixed-wing aviation threat against vessels operating in the region, but they do have what appears to be a budding shore defense capability based on their indigenous version of the Kh-35 anti-ship missile. Their hodgepodge of missile corvettes and handful of larger surface combatants rely largely on dated Soviet-era systems, including older anti-ship cruise missiles. These assets have to get close enough to their targets to acquire good targeting data in order to have any chance of a successful and accurate ship-to-ship engagement. Otherwise they would have to let loose a missile to find anything to attack on its own within a certain area, a reckless tactic that can have unforeseen consequences.

As a result, even the close-in kinetic defensive capabilities aboard a ship like Izumo—along with its potent radar system, decoys, electronic warfare capabilities and early warning systems—should be able to handle such threats. And really, the Izumo won't come close to North Korean shores to begin with, and considering how many allied vessels are operating in the area, surface vessels pose little threat to the helicopter carrier or of the ships she escorts relatively from Korean shores.

What could be something of a threat is North Korea's old but plentiful diesel-electric submarine force. This is maybe one of Pyongyang's most under-estimated military capabilities. Often this submarine force is blown off as "noisy" and "rusting" but quantity has a quality all its own. In the past, North Korea's Navy has shown itself almost freakishly capable of sortieing a large portion of their submarine force suddenly, and it is fairly well known that trying to keep tabs on dozens of submarines at once has been challenging for the South Koreans, the US and its allies.

Although this somewhat simplistic submarine force may not prove dangerous to an American Carrier Strike Group, especially one that has been augmented by the South Korean Navy and the Japanese Maritime Self Defense Forces, but a defenseless and unescorted resupply ship or fleet oiler moving into the region, that may be another story.

Obviously the North Koreans firing a torpedo at a South Korean, US or allied supply ship would be a massive escalation, but its not unheard of, and that doesn't mean training as if it were a threat is a bad idea. This is likely the essence of the the Izumo's mission. At the very least, it will give the big vessel something to do as it makes its way to its station, which could include meeting up with the Car Vinson Carrier Strike Group and its armada of allied surface combatants.

It isn't clear at this time if this mission will mark the beginning of Izumo's highly anticipated three month long deployment to the South China Sea and beyond. When the deployment was originally announced months ago, early May was supposed to be when it would begin.

France has also sent one of their Mistral class amphibious assault ships, the Mistral, around the world on a similar deployment, it having arrived at Japan's naval base in Sasebo this weekend.

Mistral, which also has Royal Navy helicopters aboard, is scheduled to participate in a multi-national marine landing exercise on Tinian Island near Guam in the coming weeks. From there it will likely head toward the tumultuous waters of the South China Sea, although with the situation on the Korean Peninsula becoming so volatile, who knows where it will end up.