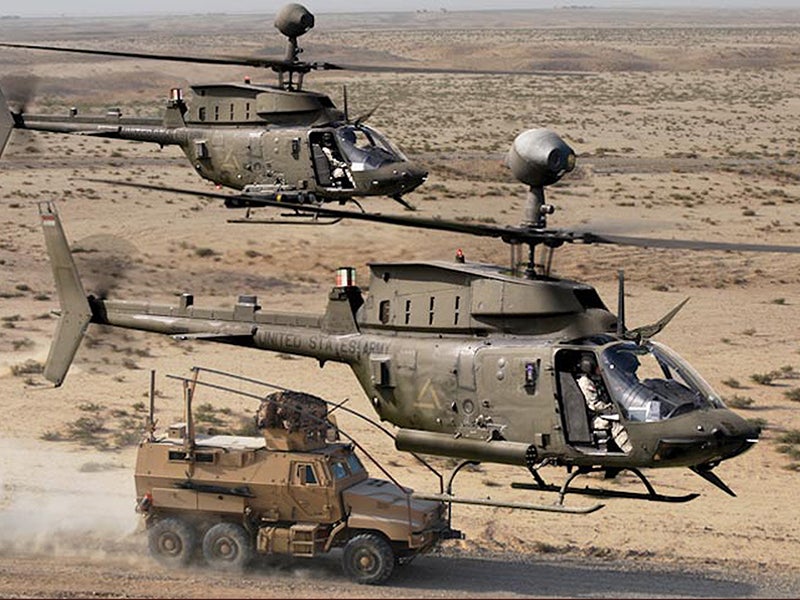 The US Army has executed its grand rotary-wing aviation restructuring plan that saw the ousting of hundreds of Bell JetRanger derivatives from service—653 airframes in total. These included the Army's entire fleet of 187 TH-67 Creek primary trainers and the roughly 340 OH-58D Kiowa Warrior armed reconnaissance/armed scout helicopters that performed so brilliantly in Iraq and Afghanistan. Now, just months after the final Kiowa Warriors were officially retired, the US Army is whining about how badly they need...an armed scout helicopter.

Under the same aviation plan, the OH-58D was partially "replaced" by far more complex and expensive AH-64E Apache Guardian helicopters and drones, with the hopes that the Apache-drone teaming would work like a charm. Well the concept is still floundering, and clearly it cannot replace the efficiency or capability that the Kiowa Warrior provided. Not just that, but the plan also has seen entry-level Army helicopter pilots being taught to fly on $5 million twin turbine medium utility helicopters—the equivalent of running a drivers ed classes in a brand new Lexus SUV.

The Army's bumbling of the often step-child like but highly effective armed scout helicopter program and community is nothing new. The service has failed to field a OH-58D replacement for nearly a decade and a half. Before its cancellation in 2004, the cutting-edge and stealthy RAH-66 Comanche was supposedly going to fill the role and more. Then the Army went for a far lower-end replacement with the ARH-70 Arapaho program that also failed after costs spiraled out of control and developmental issues persisted.

In between these programs the Army kicked the tires on many other armed reconnaissance helicopter concepts, but none made it very far. Even upgrading the OH-58D significantly was a touch-and-go affair before the type was suddenly axed entirely.

By the turn of the decade it looked as if the Kiowa Warrior would get its first major facelift in over two decades in the form of the OH-58F program. The upgraded Kiowa Warrior first flew in 2013 and it was planned to reach initial operating capability in 2016, with the entire fleet of OH-58Ds being slated for the upgrade. The type would fly in "Foxtrot" form till at least 2036, but likely even beyond. Then the end came as the Army enacted its rotary-wing aviation restructuring plan, and the Kiowa's proud service came to a fairly abrupt and unglamorous end.

During this year's Army Aviation Association of America convention, Army aviation officials stressed that the biggest gap in capability they have is the one left by the Kiowa Warrior's quick retirement, and that they are seeking to fill that gap as a top priority. As it previously sat, the Army wouldn't be able to replace the Kiowa Warrior anytime soon, as the service remained focused on developing and procuring a scalable family of new helicopter systems dubbed Future Vertical Lift.

According to Aviation Week, under the program, which seeks to employ a new form of high-speed vertical lift capability across the services, there are five levels of aircraft that could be procured. Capability Set One (CS1) being a light helicopter, all the way up to Capability Set Five (CS5) being a heavy lift cargo aircraft. In the center is CS3, which will theoretically become the replacement for the UH-60 Black Hawk and the AH-64 Apache, and also possibly the USMC's UH-1 and AH-1 fleets, among other helicopters. Currently this part of the FVL is the highest priority overall for the program, and CS3 isn't scheduled to be procured till around 2030—if the funds for such a large force featuring capabilities that are currently deemed as "exotic" materializes.

Both Sikorsky-Boeing, with their pusher-prop X-2 and S-97 Raider derived configuration dubbed the SB-1 Defiant, and Bell with their revised tiltrotor setup dubbed the V-280 Valor are the primary competitors vying for what could be the most high-stakes helicopter competition of a generation. Although both types are CS3 aircraft, it's the "densest" category of the FVL lot when it comes to potential airframe sales. So the winning technology for CS3 is likely to factor in heavily, if not totally when it comes to the Pentagon's decisions on other FVL capability set needs. A flight demonstration phase will begin by the end of the decade with both the V-280 and SB-1 airframes acting as competing technology demonstrators.

But the Army now seems to being interested in pushing forward with a CS1 design on its own, possibly outside the official multi-service JVL program. The Sikorsky S-97 Raider was originally viewed as yet another possible successor to the OH-58D—that is before sequestration hit. It is currently in flight testing and offers many additional capabilities that the OH-58D didn't—such as the ability to haul six troops into combat—and in some ways, it would even eclipse the utility of the AH-64 Apache for a portion of the Army's more kinetically oriented missions. Its speed gives it enhanced survivability, faster response times to emergency troops in contact calls, superior anti-access capabilities and enhanced sortie rates among other benefits. It is even rumored to have some low observable features, although it can't be considered a "stealth" aircraft.

Army officials state that affordability must key if they are going to move forward and try to fill the hole left by the OH-58D in the not so distant future. This is somewhat of a laughable concept considering the service basically threw away hundreds of economical helicopters they already owned outright which were still capable of the armed scout mission. Nonetheless, while FVL will highly depend on scalability across as many services as possible for each aircraft capability set category cooperatively procured—for instance would the USMC want a CS2 or CS3 design to replace their attack helicopters, and if they go for a lighter and cheaper CS2 aircraft, maybe the US Army would follow suit—an Army armed scout replacement initiative would likely travel on its own vertical track. This way there would be no need for a "wait and see" mentality in regards to finding out other services' needs and wishes, or for FVL to mature as a program at all. As a result, if the funding materializes, an armed scout helicopter replacement could happen relatively quickly. But once again, getting the funding to do so is about as big of an if as it gets right now.

All this seems to be happening with little reflection as to what caused this capability gap in the first place. Specifically that it was partially self imposed as part of a highly questionable scheme that many predicted would end exactly how it has—with a glaring capability gap. If the Kiowa Warriors were kept and given some focused upgrades so that they could last even another decade, a replacement could have been procured based on far more mature FVL associated technologies. Not just that, but the Army would not be flying a fleet of twin engine utility UH-72 Lakota helicopters as trainers, nor would they need to have procured 100 more to augment the 87 existing airframes that were ordered to be ported over to the training role as part of the plan.

Supposedly there have been some minor benefits associated with using the UH-72 for the training mission, but it seems very unlikely they outweigh the high cost of procuring and operating these relatively large and complex helicopters in such a basic role. Really, the Army could have executed other parts of its rotary-wing restructuring program—which included moving attack helicopters from the Guard to the active force, and Black Hawks from the active force to the Guard—while leaving the OH-58 and TH-67 alone. Additionally, if the Pentagon and the services under its purview would finally grow up and look at their assets in a holistic manner, a portion of the UH-72s could have been ported over to the USAF to replace its relatively ancient UH-1N missile tenders and VIP helicopters. In fact, the same 87 airframes sent to Fort Rucker to provide training, probably would have done the trick.

The upside to all this is that if the Army could come up with some serious funds to procure a new advanced armed scout helicopter, Sikorsky has been self-funding development of the S-97 raider for years, so the Army would be stepping in later in the Raider's development process than it would have otherwise. And if given the chance, the aircraft could even prove itself so indispensable that it may even be able to pull from other Army aviation budget pales, including the traditionally highly guarded funds set aside for its attack helicopter force.

Special Operations Command (SOCOM) could also potentially get involved with the S-97 program if "big Army" blazes the way. The type seems extremely well suited for the intense demands of the famed 160th Special Operations Air Regiment (SOAR), and could partially or fully replace the MH-6 and AH-6 Little Bird, as well as the MH-60 Direct Action Penetrator. The more participation in the program the more the unit cost could decline and it could also actually lower risk for the Future Vertical Lift program in the coming decade as a byproduct.

On the other hand, even though it is unlikely, the US Army could very well go for a far lower-cost, off-the-shelf solution just to get the armed scout mission back in its portfolio. The highly mature AH-6i, a militarized MD530F derivative, that has seen export success would be able to fill the role in a very low-risk and low-cost manner.

By procuring the AH-6i, the Army would be able to field a platform with hard hitting-Hellfire missile capability at a fraction of the cost of an Apache. Not just that, but the helicopter can carry many types of stores and execute many other roles, from intelligence gathering to liaison duties. With the advent of highly accurate but compact laser-guided rocket, a small helicopter like this, or even the retired OH-58D, can now feature a deeper precision guided weapons magazine than ever thought possible. In retrospect it is sad the OH-58D never got to leverage this new weapons capability, it would have likely given the humble chopper new worth.

Above all else, the AH-6i would give the Army a cheap, easily forward deployable reconnaissance helicopter that can hit hard when called upon. All without the heavy logistical footprint of the far more complex and expensive Apache. Then, in a decade and a half, once FVL has matured, the Army can look toward fielding a far more elaborate armed scout asset if it still wants to.