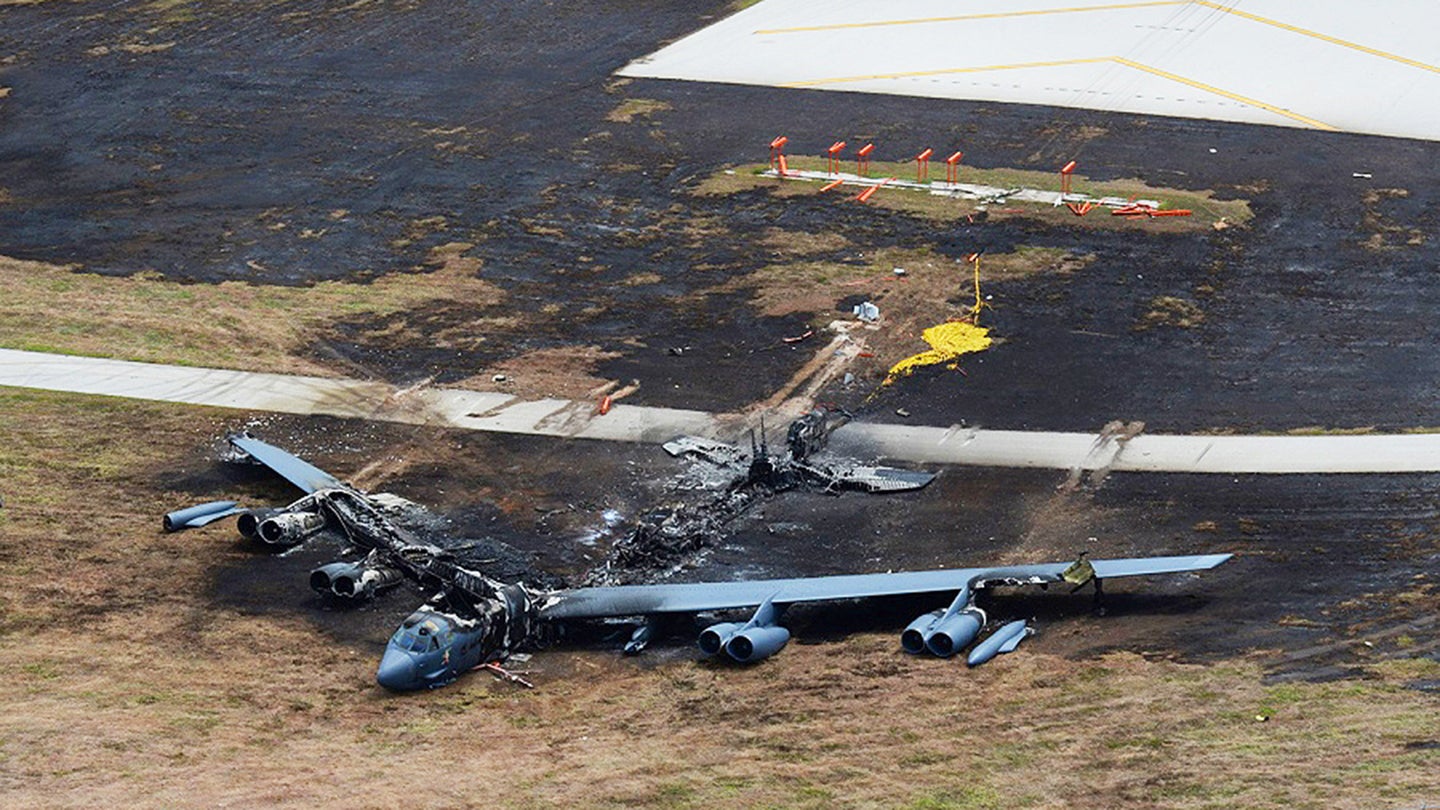 New information has come to light regarding two major mishaps we covered in detail here at The War Zone. The first has to do with the total loss of a B-52H Stratofortress that was taking off from Andersen AFB in Guam last May. The second is regarding the total loss of a TU-2S Dragon Lady trainer in Sutter County, California last September. All crew escaped safely from the incident involving the B-52, but, sadly, one of the two pilots involved in the U-2 crash was not so fortunate.

The B-52 crashed upon takeoff after the aircraft's crew saw birds flying at roughly the same height as the airplane's wings, followed by the sensation of a series of "thuds" on the B-52's right side. Three of the B-52's eight engines were observed operating below optimal takeoff performance following right after the potential run-in with birds occurred, and a fourth engine was displaying a high oil-pressure warning light. A sharp yaw from left to right indicating asymmetric thrust was also abruptly felt by the crew.

These factors prompted the B-52's pilots to execute an aborted takeoff procedure at 142 knots, which included deploying the aircraft's drag chute at 135 knots, and slamming on the brakes. The chute ruptured on deployment and the aircraft's brakes failed after exceeding their design limits, resulting in the bomber plowing its way roughly 300 feet beyond the runway's extended threshold. The aircraft, which was laden with fuel at the time, burst into flames. Although the crew escaped, the B-52 was a total loss.

Although bird activity was clearly a contributing factor to the mishap, and it is a chronic cause of mishaps and damage across the USAF's fleet, it is not clear if the engines ever sucked in any birds at all as no organic residue was found during the investigation. Still, the aircraft was badly burned so it is possible that ingestion had occurred but did not manifest itself as it regularly would during examination. In the end, mechanical issues, such as the engine oil pressure alert, as well as the failed drag chute doomed the jet.

You can read the whole mishap report here.

The TU-2S crash in California has now been attributed to pilot error. The incident occurred during the first of three "acceptance flights" for a pilot that was "interviewing" to become part of the elite U-2 pilot cadre. The pilot was executing training that brought the U-2 to the edge of a stall. The maneuvers are used to familiarize new pilots with the how a U-2 feels before it enters a stall, and how to recover from such an event if it were to occur. The U-2 is infamous for its challenging handling qualities, especially at slow speeds around the landing pattern.

During the recovery procedure, the new pilot inadvertently commanded the aircraft into a second stall. This event resulted in an abrupt wing drop to the left, leaving the TU-2S with its nose approaching nearly perpendicular to the ground. With decreasing altitude left for a safe recovery from the deep stall and an extremely depressed attitude, the instructor U-2 pilot called for an ejection. The trainee U-2 pilot separated safely from the aircraft, but the instructor pilot and his ejection seat impacted the U-2's right wing, which caused fatal trauma. The Dragon Lady trainer quickly impacted a remote hillside below, leaving strewn debris and a large scorch mark. In the end, veteran U-2 pilot Lt. Col. Ira Eadie died as a result of the mishap.

You can see the news release related to the crash investigation here.