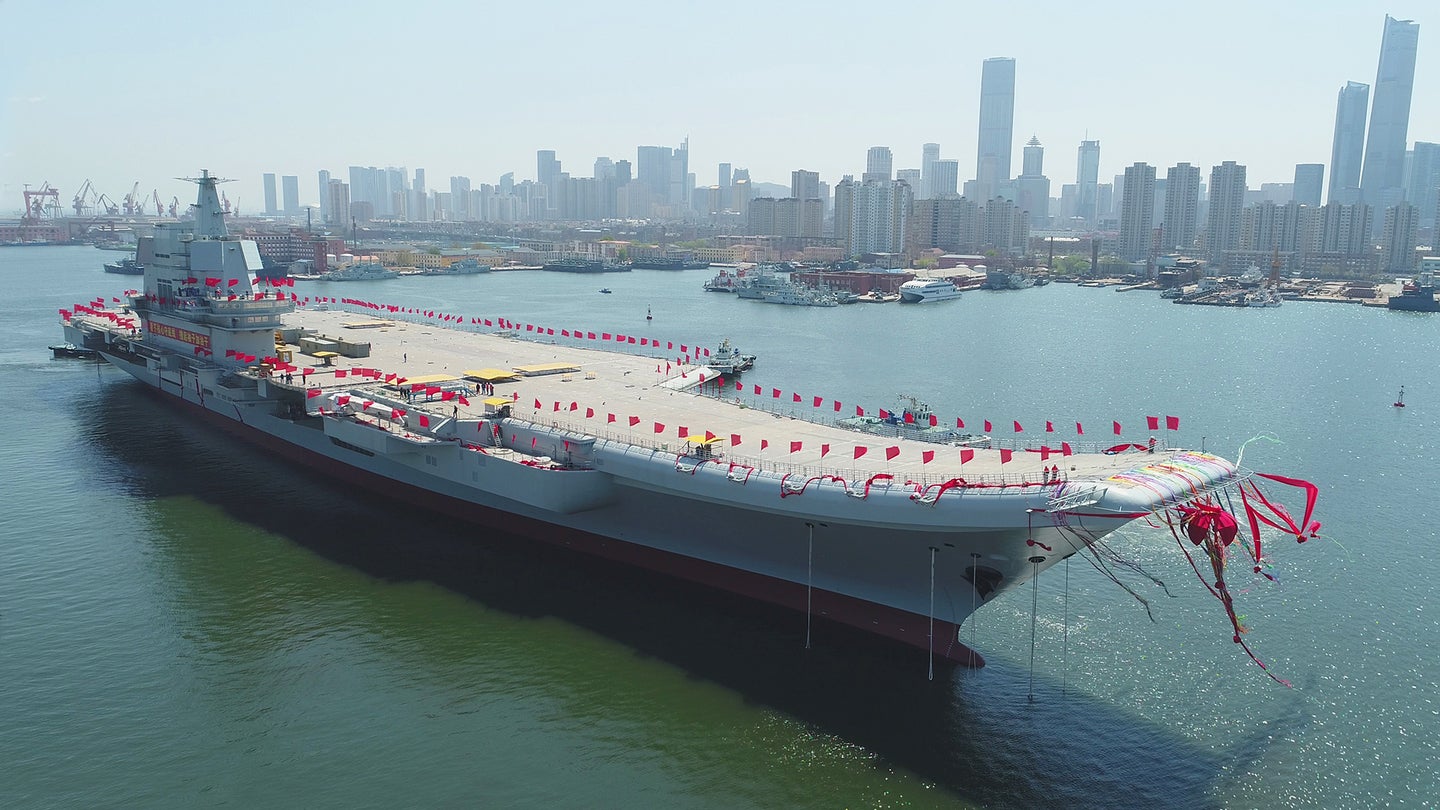 China has launched its first home-built aircraft carrier—a clone of the Russian Kuznetsov class carrier Beijing obtained through a dizzying transfer scheme executed nearly two decades ago. Since then, China restored the rusting hulk of that carrier, known originally as Riga, into its first operational carrier, the Liaoning (CV-16). Deeply refurbishing a carrier that many thought was unsalvageable gave China a thorough understanding of how the ship was built, which was absolutely necessary in order for the country to construct a carrier on its own. As such, China's home-built carrier is truly an example of reverse engineering on a grand scale.

Today's launch is not only a logical step, but also an impressive one that brings Beijing closer towards achieving its goal of fielding a robust carrier-borne naval aviation capability. It will also work as a springboard for developing an entirely original carrier design that leverages catapult and other more complex technologies.

Defense analysts have closely watched the relatively fast construction of this new aircraft carrier over the last few years at Dalian Shipyards. In recent months, it was apparent that the vessel was nearing completion, and last week a launch of the vessel, known now only as Type 001A, was deemed imminent. It is unclear what her exact designation will be, but pennant number CV-17 is almost certain, and the name Shandong is rumored to be her title once she is commissioned.

The carrier is nearly identical to its foreign-born sister ship, although there are slight differences. Its planform has some small modifications—a nip here and a tuck there. Our friends over at CSIS have kept a really close eye on this new Kuznetsov class derivative and concluded that these are the small differences between Type 001 and Type 001A:

This new carrier will become active around 2020, and will serve alongside Liaoning as China's primary means of power projection throughout the region. But before then, it will require its sub-systems to be installed, including its sensors and defensive weapons, and it will have to go through a series of sea trials and certification activities before officially being deemed fit for duty.

Since it has two very similar aircraft carriers in service, China will have optimized its ability to keep one of the vessels ready for deployment, on deployment or undergoing training at any given time. China can also amortize its investment in developing and fielding its carrier-borne J-15 fighter—which is also an indigenously-built clone of an existing Russian design. In this casem it is a updated version of Russia's Sukhoi Su-33 that has operated aboard the country's only carrier—the Admiral Kuznetsov—for nearly 30 years. Beijing can also make better use of other investments in infrastructure, support capabilities, and manpower with two similar vessels in inventory at the same time.

Much is made of China's aircraft carriers and their capabilities versus America's nuclear powered supercarrier force. This debate is really just a distraction as these ships are not meant to go toe-to-toe with their American counterparts, especially not in a "blue sea" vacuum-like combat environment. Instead, these carriers and the flotillas that will accompany them are meant to project power on a regional scale—to dominate small nations and their territorial claims within China's immediate sphere of influence—and to maintain parity, if not outright superiority, within the naval realm among more powerful potential foes, such as India and Japan.

Above all else, this ship and the aircraft that will dot its deck, is part of a long-term plan in which China aims to make steady progress towards mastering naval aviation, and having a plentiful carrier force of their own. It seems that most indications put such a force at roughly six ships. But they won't all look like the Type 001A—instead the People's Liberation Army Navy will quickly ditch the ski-jump configuration and move to a catapult launch system configuration, better known as CATOBAR (catapult aircraft take-off barrier arrested recovery). By doing so, China will realize far higher sortie rates, a larger range of aircraft it can deploy, and the ability to send jets off with full fuel and weapons payloads from its future carriers.

It is thought that China will start building a CATOBAR carrier design, dubbed the Type 002, now that this new ship has been launched or possibly after one more Type 001A class carrier is constructed. China has been testing steam catapults—and what appears to be a system similar to the Navy's magnetic EMALS catapult system—for some time now at a specially-built facility similar to the Navy's Lakehurst test center. A J-15 specially modified for catapult operations, featuring a nose gear launch bar, has also been spotted. India is also working to field a CATOBAR carrier as well, with a design that will feature EMALS technology (via the US), as well as nuclear power, slated to be in service in the mid to late 2020s.

Above all else, constructing the Type 001A has given China direct insight on how to build a massive war fighting ship, and specifically one capable of operating large fixed-wing fighters from its deck. As a result, the country has made a giant leap toward successfully generating the necessary set of skills to build even more complex CATOBAR carriers in the not so distant future.