Sending two F-35s to the region doesn't hold much military significance, but that's not the point. 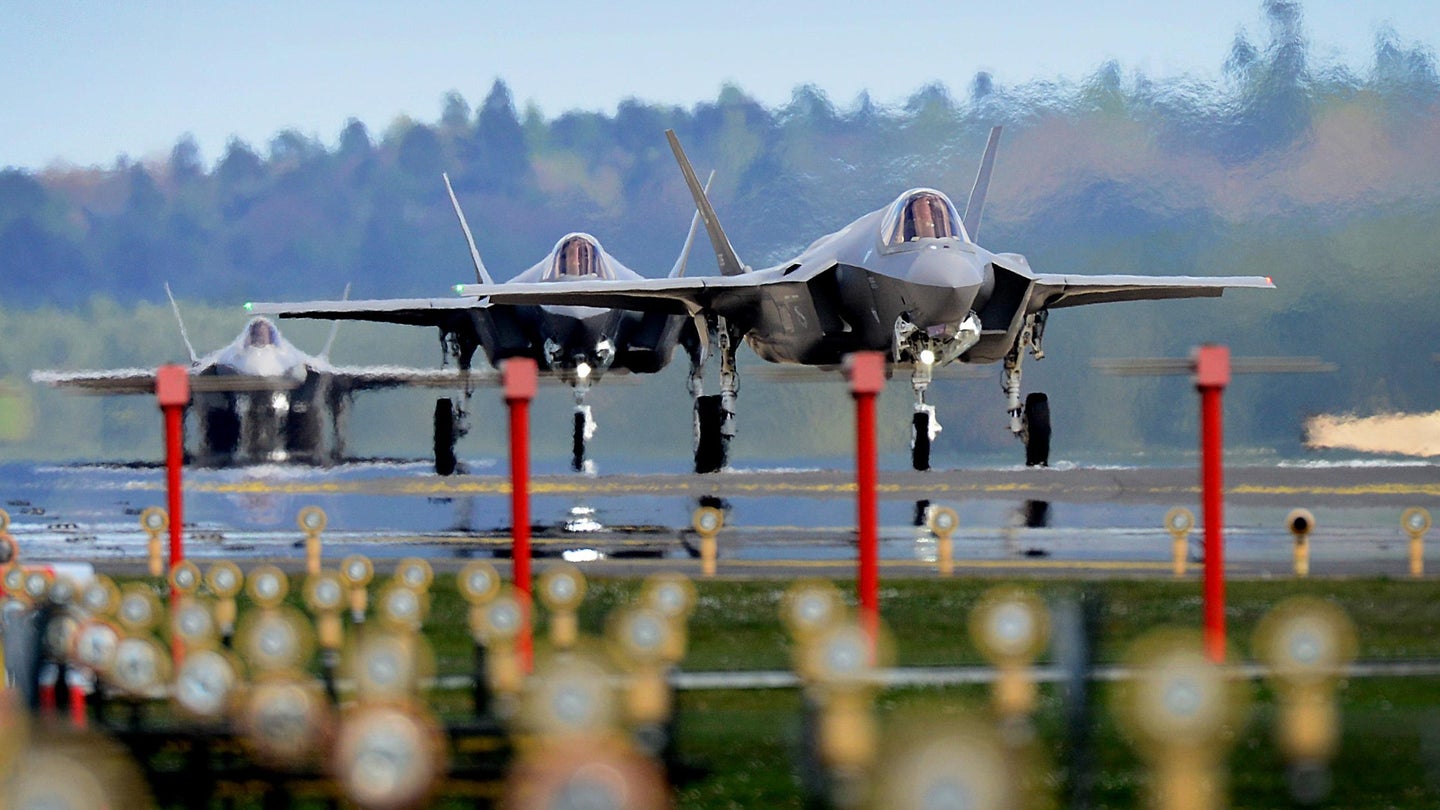 The U.S. Air Force’s F-35A Joint Strike Fighter has made its first trip to Estonia. Though small, the deployment is an important statement to Russia, America’s NATO allies, and critics of the often vexing aircraft.

On April 25, 2017, U.S. Air Forces in Europe formally announced that two F-35As stealthy fighter jets and approximately 20 airmen had arrived at Ämari Air Base in the Baltic country’s Harjumaa County. The base sits less than 150 miles west of the Russian border and about 300 miles northeast of Russia’s geographically separated enclave of Kaliningrad.

The pilots, maintenance specialists, and other support staff came from the active component 34th Fighter Squadron and the Air Force Reserve's 466th Fighter Squadron, both based at Hill Air Force Base in Utah. Earlier in April 2017, a total of eight F-35s and 250 airmen touched down at RAF Lakenheath in the United Kingdom for training missions across Europe.

It’s not clear whether the 20-person total included the crew of a KC-135 tanker from the Air Force’s U.K.-based 100th Air Refueling Wing, which also deployed to support the mission, security forces to guard the jets, or any other personnel.

As it often does, the Pentagon insisted that the surprise move was long-planned, had no relationship with any current events, and was just like any other training exercise with a NATO. Neither the Estonians nor the Russians seemed inclined to agree.

“The introduction of the newest fighter to Europe, with its state of the art systems will help the alliance maintain the fundamental sovereign rights of all nations,” Estonian Defense Minister Margus Tsahkna said at a ceremony filled with international press announcing the new arrivals. “Hosting such advanced aircraft is certainly a big recognition to Ämari Air Base and to the Estonian air force as a whole.”

It seems highly unlikely that Tsahkna wasn’t alluding to Russian aggression in nearby Ukraine. The Baltic States of Estonia, Latvia, and Lithuania most recently gained independence from Moscow after the breakup of the Soviet Union in 1991. All three were particularly concerned about Russia’s forceful annexation of the Crimea region in 2014, followed by the Kremlin’s active support for rebels fighting the government in Kiev.

After the invasion of Crimea, the Pentagon quickly deployed other aircraft and ground troops along NATO’s eastern flank and stepped up regular training exercises and aerial surveillance missions in close coordination with all of the alliance’s members. America’s whole-of-government effort to calm its European allies became known as the European Reassurance Initiative (ERI), while the U.S. military dubbed its part Operation Atlantic Resolve.

For Estonia, in September 2014, the potential for serious conflict became frighteningly visible when Russian agents arrested – or kidnapped – an Estonian intelligence officer. After a year of pronouncements and negotiations, Russia swapped Eston Kohver for Aleksei Dressen, who Estonian officials had accused of treasonous activities on behalf of Moscow. So, for the Baltic States, the fear of a Russian intervention is very real. Earlier in 2017, Estonian, Latvian, and Lithuanian special operations forces joined their American counterparts in West Virginia for practice sessions focusing on operations behind enemy lines and fighting insurgents.

The deployment of American troops with high-tech weaponry like the F-35 is a morale boost if nothing else. And the significance of the ERI and Operation Atlantic Resolve hasn’t been lost on Russian officials, either.

"This is an action that threatens our interests, our security," Kremlin spokesman Dmitry Peskov said after the U.S. Army sent troops to Poland, with plans to move units into the Baltic States, in January 2017. “Russia doesn’t pose any threat to Estonia nor any other NATO member state,” Alexander Yakovenko, the country’s ambassador in the United Kingdom, told The Daily Mail.

Russia regularly touts advances in both fighter aircraft and air defenses, especially long-range surface-to-air missiles and radars, as a veiled threat to NATO warplanes. There are S-400 SAMs in Kaliningrad and elsewhere in Western Russia, as well as plans to get the first batteries of the newest S-500 missile system into service by the end of 2017.

On top of that, Russian Air Force and Navy planes routinely probe the borders of alliance members and separate, but still western-aligned countries like Finland and Sweden. Various advanced members of Sukhoi’s Flanker fighter family make frequent appearances, as do Tu-22M Backfire and Tu-95/142 Bear bombers. Moscow regularly sends Bears in the opposite direction, too. After the F-35s arrived in the United Kingdom, Tu-95s made their own shows of force off the coast of Alaska.

Sometimes the incidents have been more threatening or dangerous. In August 2014, Russian fighters chased an Air Force RC-135V/W Rivet Joint signal-snooping spy plane out of the Baltic Sea and inadvertently into Swedish airspace. Eight months later, another Russian pilot barrel-rolled over an RC-135U Combat Sent, which was in the same area likely gathering details on the Kremlin’s air defense radar network. Oh, and then there’s Moscow’s harassment of U.S. Navy warships much further south in the Black Sea.

In the past, the Air Force has sent F-22 stealth fighters and other fighter jets to the region in shows of force. To make up for the limited capabilities of all three Baltic air forces, NATO members send fighters to police the region’s airspace on a rotational basis, too. Having the advanced F-35s in the area could send the message the Pentagon continues to be serious about responding to these incidents. From Estonia, the jets could patrol a not insignificant portion of Russia’s border with NATO.

But the threat of steadily improving, integrated anti-aircraft weapons and advanced fighter jets were also among the main reasons the Pentagon has been pushing for the F-35 in the first place. The Air Force has consistently argued that 4th generation fighters would be unable to survive any future, hypothetical shooting war in Europe or Asia against a near-peer adversary like Russia or China.

“The question of an F-15 and an F-16 in a European scenario on its own,  neither one is going to do it,” Air Force Lieutenant General Mark Nowland, the service's Deputy Chief of Staff for Operations, said earlier in April 2017, according to DefenseNews. “They both are going to get shot down and die.”

However, it's doubtful the jet's low observable features will come into play during this particular deployment. Official pictures and videos show crews had fitted the jets with radar reflectors so they would appear on even civilian radars and make the  transit to the United Kingdom and onward to continental Europe as safe as possible. It also means the Russians most likely won't get a chance to study the jet's actual radar signature. Of course, in any actual combat scenario, the aircraft would not carry these devices.

It might actually be the F-35 that ends up scanning Russian defenses along the Baltic. Lockheed designed the F-35's mission computer to collect, analyze, and display electronic signatures from radars and other air defense assets to help pilots detect and avoid them during missions. With the ability to gather this information passively, depending on how functional the Joint Strike Fighters' systems are, they may be able to act like small spy planes and scoop up various details during their upcoming training exercises. That being said, pilots may opt not to use all of the sensors available to them in order to prevent the Kremlin from finding out too much about those capabilities, too. The F-35's advanced APG-81 AESA radar in particular would be of special interest to Russian intelligence. But it can operate in low-probability of intercept mode, and possibly even in heavily degraded training modes that would not compromise its full capabilities. That is if the jets' pilots are allowed to turn it on at all.

Regardless, critics have argued the Joint Strike Fighters may never be truly ready for combat. So, beyond just sending the advanced planes to stare down Russia, the Air Force's deployment of F-35A to the United Kingdom and then onward to Estonia are important milestones for the program in general.

In the face of serious cost overruns and delays, the Air Force in particular, which plans to ultimately buy a huge force of more than 1,750 of the stealthy jets, has been keen to show the aircraft are ready for combat. This push has only escalated since the service controversially declared initial operational capability (IOC) with the jets in August 2016. Putting up impressive numbers at major air combat exercises like Red Flag are one thing, but they can’t compare to actual operational deployments like the visits to the United Kingdom and Estonia when it comes to getting the jets out in the field, away from their usual creature comforts.

On April 24, this display of the F-35s abilities became even more important when the Government Accountability Office, one of the U.S. governments top watchdogs, published its latest report on the program. The nearly 50 page review warned about the potential for costs to keep climbing, despite attempts by the Pentagon to stabilize the project’s final price tag.

“Cascading F-35 testing delays could cost the Department of Defense (DOD) over a billion dollars more than currently budgeted to complete development of the F-35 baseline program,” GAO stated up front in the review’s introduction. “The program’s projections are based on anticipated test point achievements and not historical data.”

The investigators disagreed with the F-35 Joint Program Office’s estimations of how far delays in testing would set back the beginning of operational test and evaluation and how much the schedule slip would cost. Officials working on the Joint Strike Fighter insist the delay will only amount to 5 months and require an additional $532 million to complete development of the jet’s Block 3F software and mission systems. GAO concluded it would actually take an entire year and at least another $1.2 billion to move forward.

Running off more than 8 million lines of code, the F-35’s computer brain is responsible for everything from flight handling to detecting and tracking targets and threats in the air and on the ground to diagnosing malfunctions and breakages. The Joint Program Office wants to start work on the next iteration of the system, Block 4, sometime in 2018, but needs to complete work on 3F first in order to know what works and what doesn’t. GAO is of the opinion that the latest delays would push back plans for full-rate production beyond April 2019.

At the same time, the F-35 has become a major issue for President Donald Trump and his administration. On the campaign trail and after his election victory, he singled out the aircraft as just one troubled U.S. government project that he would fix. In an interview with the Associated Press on April 24, 2017, Trump reiterated his claim that it was his personal intervention after taking office that saved the program hundreds of millions of dollars.

Most experts agree that the deal with defense contractor Lockheed Martin likely only involved a smaller unit cost, something that the Pentagon had long expected to happen as overall production numbers increased. Whether or not Trump’s attempts to exert pressure on the F-35 by threatening to pursue an alternative design – and potentially leaking key details to competitor Boeing – have had any impact remains up for debate.

This budgeting and politicking probably don’t matter much to officials in Estonia, who are clearly thrilled to have America’s newest fighter jet in their country. Whether the Russians get the intended message is another issue entirely.