The F-117 continues to be one of the most intriguing aircraft ever built, even nearly a decade after it was retired, and close to 30 years after it was originally unveiled to the public. From the Nighthawk's "cloaking device" to its "toxic death" paint job, it seem like some of the most interesting aspects of the F-117's story are the small bits that have largely gone unreported. Maybe one of the most obscure and enigmatic details of the "Black Jet" is an elusive component called the Radar Locating System (RLS). For an aircraft that survives on its stealthy shape and coatings, these flip-down antenna arrays seem to deviate drastically from the F-117's modus operandi. But then again, the impetus for their existence may make more sense than not—that is if they really existed at all.

The F-117's Radar Locating System consists (as far as we know) of a pair of small planar antenna farms located under the aircraft's wings, about ten feet from the wing roots, near their leading edges. The idea behind the system seems to have been that the F-117 pilot, who would normally retract all the jet's antennas when moving into hostile territory to minimize its radar reflectivity, could activate the system and its antennas would pop down into the airstream. Once deployed, they would work as a radar homing and warning receiver (RHWR), not only notifying the pilot of the an enemy radar's presence and type, but also its direction and maybe even its general location.

Based on some accounts, the RLS seems to have been more about using the F-117 for the destruction of enemy air defenses (DEAD) role than just avoiding enemy emitters, and was possibly part of a program that aimed to see the F-117 dynamically go after radar and SAM sites as a secondary mission set. Based on the information available, it may have also had a recording function and could have given the aircraft a secondary signals intelligence collection capability as well.

The picture above is credited to James Goodall—if you don't own James's books, make sure to buy them, and a new one on nuclear fast attack subs is coming out this summer. It is a rare photo of this elusive system. According to one source, the array appears to be set up for spiral omni-directional electronic support measures (ESM) antennas, roughly 50mm in diameter, which are typical for 0.2-18GHZ surveillance coverage, and they can be specifically tuned to different bands. Because of their wide spacing on each side of the jet's wings, the two sensor blocks/arrays coupled with the forward motion of the jet would provide direction finding ability. In other words, at least the threat emitter's bearing could be identified, and possibly its range. This would be especially useful for finding and attacking newer road-mobile SAM systems like the S-300 and SA-11 that were emerging at the same time the F-117 was operating under high secrecy in the Nevada desert.

Today some of the most powerful capabilities that a combat aircraft possesses, especially the stealth kind like the F-22 and F-35, are their abilities to detect, classify and geolocatethreat emitters and other components of an enemy's integrated air defense systems (IADS). This is done via antennas placed all around the aircraft, under its stealthy skin. These conformal arrays are tied to high-speed computers that use interferometry, a large threat library, and other methods to give pilots—and even other aircraft connected via data-link within the battlespace—a real time tactical "picture" of the electronic order of battle around them. RLS seems like a very early and somewhat poorly conceived attempt to give the F-117 a fraction of this capability. Because conformal arrays and their composite coverings were not available at the time, the flip-down method was likely used.

The likely problem with the system was that it drastically increased the F-117's radar cross section when in use, as its flip-down antennas compromised the jet's smooth ventral surface. This is an especially bad attribute when it comes to maintaining a very low radar cross section for the critical forward hemisphere of the aircraft. The likely result was the F-117's radar signature bloomed drastically when the RLS was activated. As such, the system would not only blow the Nighthawk's cover, but it would also turn it into a target. Not just that, but it would have only offered a "snapshot" of the electronic threat environment around the F-117 at any given time. That's because the system would need to be retracted quickly, or it would turn the jet into a sitting duck while operating in enemy airspace.

By most accounts, it seems that the system was either just part of a test series, or was only used for a very limited amount of time operationally, and how many jets it was installed on remains an unknown—that is if it ever existed at all.

Some veteran F-117 maintainers seem to remember the quirky RLS trap doors pretty well. They even have mentioned that they were known to sag, which would not only hurt the jet's stealth capabilities, but on dark nights that often were prime operations time for F-117 missions, partially opened RLS doors could be a hazard for maintainers foreheads.

Not just that, but the RLS is prominently featured in the F-117's "Dash One" operating manual. It is not only mentioned, and its abandoned control panel identified, but its location is also shown clearly in a diagram of the jet. You can see the mentions below, and the entire manual is available online here.

It has been noted that by 2006, the system was not listed in official hazard and crash responders documents which are posted online here. The diagram showing the RLS doors are still there, but it does not identify it as being something that is accessible like the rest of the aircraft's retractable antenna, so it seems as if the doors were permanently sealed or filled-in at some point in time. This could have occurred during a depot overhaul or upgrade.

While we have a picture, written and first hand accounts of the Radar Locator System, it seems that its existence is still highly doubted by some—including the man that largely oversaw the development of the jet—senior Skunk Works engineer and F-117 program manager Alan Brown.

I chatted at length with Mr. Brown about the F-117 and this obscure, and let's face it, mysterious feature. He was as puzzled as I was. After sending him the picture of it, he was kind enough to respond with his conclusions:

"This picture doesn’t look like anything that was ever put on a F-117A airplane, and as such I am inclined to discount the story entirely. The only possibility to my mind is that the USAF made the modification themselves without Lockheed’s knowledge, but that itself is impossible for me to believe, knowing how well we followed up with the airplane in the field. Lockheed Skunk Works always had a cradle-to-grave philosophy in terms of follow-up with its products in service."

Mr. Brown was even nice enough to contact his successor as F-117 program manager, Sherm Mullin, to see what his thoughts were about the RLS enigma. His reply was just about the same as Mr. Brown's, stating that "it was never put on the F-117, period." Although he did mention that it could have been a concept from a study that occurred from 1984 to 1985 that apparently went off the rails conceptually and was disbanded with prejudice as a result.

During roughly that same time period it is known, although not well documented publicly, that the F-117 was tested with some fairly elaborate modifications. This supposedly included a handful of sensor systems in addition to the jet's stock Infrared Acquisition And Designation System (IRADS). We know that a passive electronically scanned array (PESA) radar was flown on one F-117 in a specially-built radome fitted on the Nighthawk's iconic wedge-like nose. Maybe RLS was one of the other mods that was deemed successful, and was accommodated for in some F-117s built, but never fully installed.

Still, you would think that even something as useless as an empty-flip down antenna array would be well known by the F-117s top engineers and program managers.

So there you have it, the obscure mystery of the F-117's funky little flip-down Radar Locator System. For a jet that was made famous for its work during Desert Storm, it is really amazing that we are still finding new peculiarities of its design and genesis to discuss. Then again, the jet was so exotic for its time and its deep classification added massively to its murky lore—not to mention it has off-the-charts techno-sinister looks—that really it is mystery personified. The fact that it is still flying, and we are still wondering as to its applications, even after it left front line service almost a decade ago, goes to show you that the F-117 is a mystery machine at heart that just won't die. 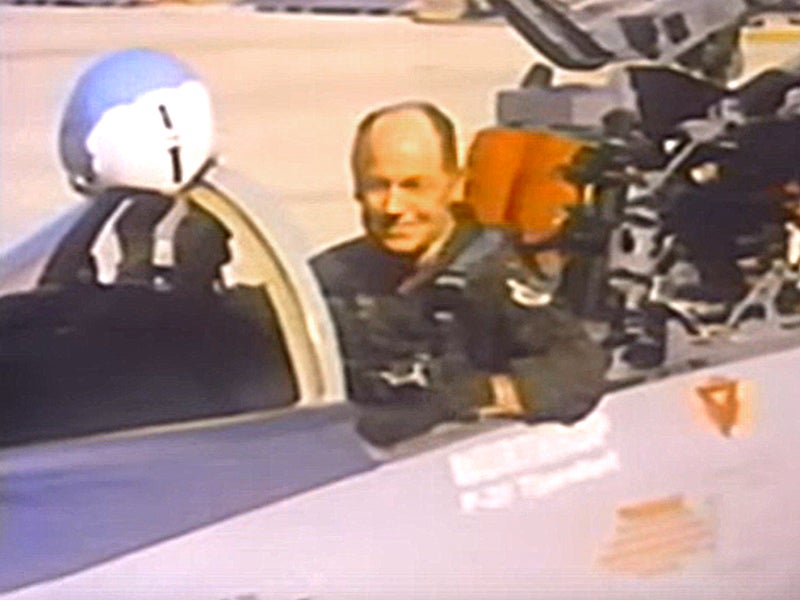 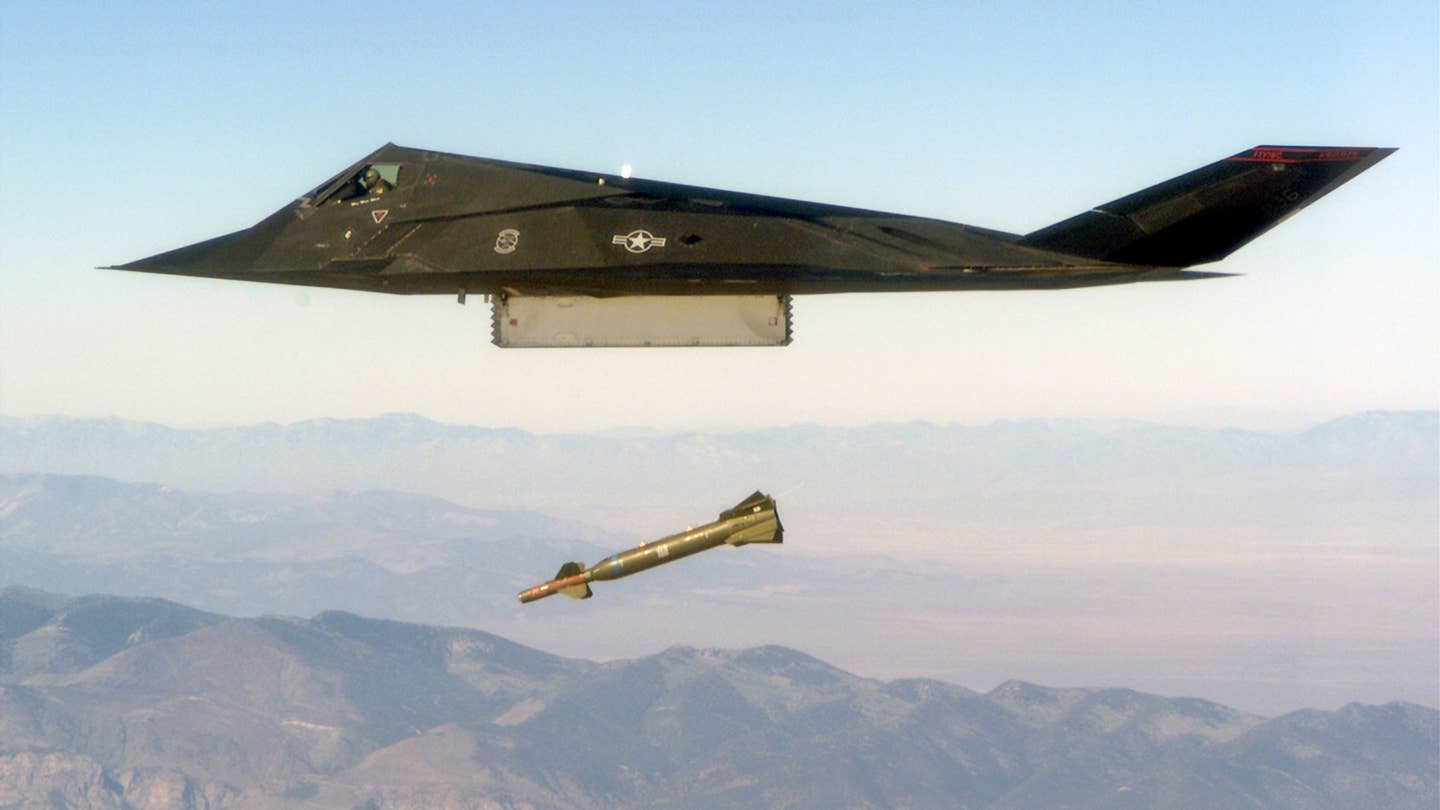