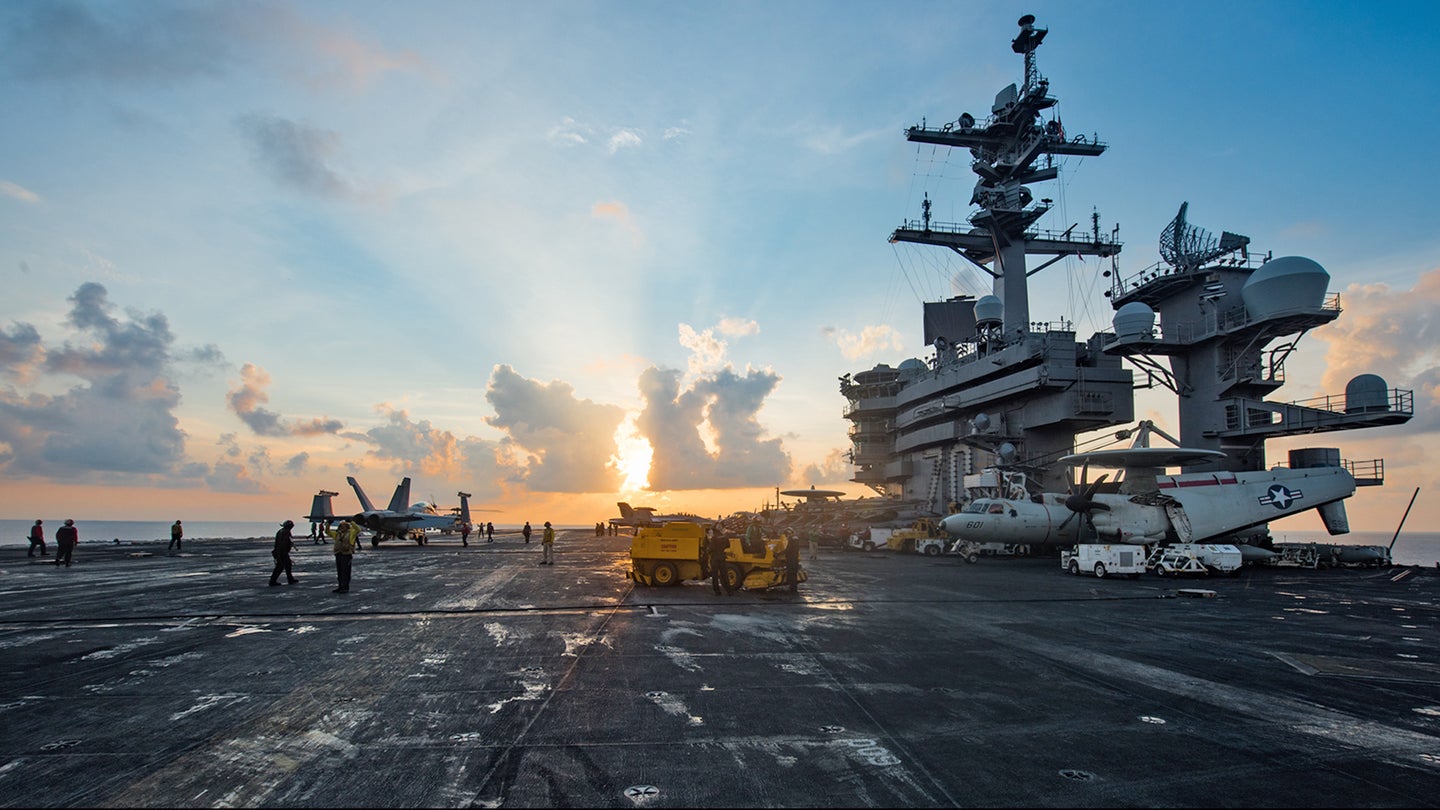 The about-face of the supercarrier USS Carl Vinson and good portion of her escorts made huge news all last week as increasingly louder war drums were signaling a confrontation between the US and North Korea. By the time North Korea was parading ballistic missiles through its streets, and a missile test launch or nuclear weapons test was likely imminent, it was assumed the ships were closing in on the area, along with a contingent of Japanese warships they were supposed to meet up with. Now it appears this was not the case.

The Navy posted a picture on Monday of the USS Carl Vinson traversing the Sunda Strait—a patch of water that bisects Java and Sumatra—some 3,500 miles from the Korean Peninsula. The photo was dated Saturday, April 15th, which is a week after reports regarding the orders to send the carrier towards the Korean Peninsula began appearing.

Here is that photo:

Traditionally speaking, the rumor mill is ripe in the world of defense reporting as so much having to do with military hardware, operations and movements is placed under a shroud of secrecy. But in this case, that was not so. The reports of the Carl Vinson's repositioning orders were confirmed by the highest levels of the US government.

On Saturday, April 9th, Admiral Harry Harris, commander of U.S. Pacific Command, supposedly redirected the Carl Vinson Carrier Strike Group towards the Korean Peninsula, with an official Navy release stating that the flotilla "will operate in the Western Pacific rather than executing previously planned port visits to Australia."

On Sunday, April 10th, National Security Advisor H.R. McMaster stated the following on Fox News Sunday when asked about moving the Carrier Strike Group to the waters off North Korea:

"Well, it's prudent to do it, isn't it?" He also added that "the President has asked to be prepared to give him a full range of options to remove that threat the American people and to our allies and partners in the region."

Then there is White House Press Secretary Spicer's exchange with a reporter on Monday the 11th regarding the carrier's change of course:

Reporter: "Putting that strike carrier group in the Sea of Japan, in that region, is that also a messaging circumstance? Or is that simply protective for our allies in Japan and Korea?"

Spicer: "A carrier group is several things. The forward deployment is deterrence, presence. It’s prudent. But it does a lot of things. It ensures our -- we have the strategic capabilities, and it gives the President options in the region. But I think when you see a carrier group steaming into an area like that, the forward presence of that is clearly, through almost every instance, a huge deterrence. So I think it serves multiple capabilities."

Then two days later, Defense Secretary Mattis stated the following during his first Pentagon press conference after a reporter asked him about sending the carrier back to Korea and canceling its planned exercises with the Australian military:

“She's stationed there in the western Pacific for a reason. She operates freely up and down the Pacific, and she's just on her way up there because that's where we thought it was most prudent to have her at this time. There's not a specific demand signal or specific reason why we're sending her up there.”

There were plenty of other statements as well made on background to the press that fortified the idea that the carrier was being redirected. And certainly the comments and tweets from President Trump himself reinforced that a military showdown with the Kim regime was looming. During an interview by Maria Bartiromo, she asked Trump about the carrier being sent to the Korean Peninsula, here's his reply:

"I don't want to talk about it. We are sending an armada, very powerful. We have submarines, very powerful, far more powerful than the aircraft carrier, that I can tell you."

So what happened here? How could everyone think a carrier strike group was heading in one direction, when it was really headed in another? Although maybe improbable, it is possible that this was not the case at all.

This apparent massive mix-up could have been a feint to put pressure on North Korea and keep them in check temporarily during a high-risk date on the calendar. In fact, as the weekend grew near, it seemed less likely that a war would erupt between the US and North Korea. President Trump flew down to his Mar-a-Lago resort without his national security team—something a President would not likely do if they were planning a high-stakes contingency operation that could erupt into a massive war. At the same time, Vice President Pence's trip to South Korea wasn't cancelled, with a Sunday arrival date still in place. And Pence ended up making that trip, which included a visit to the DMZ.

In the meantime it became more and more plausible that coalition building was underway, instead of the execution of a war plan, with Pence meeting with top South Korean and later Japanese officials in what seems like an effort to get everyone on the same page going forward when it comes to dealing with the Kim regime.

Maybe most importantly, as last week drew to a close, it seemed as if China was beginning to enact a far more hardline policy toward North Korea than in the past. China even turned around coal shipments from North Korea—one of the reclusive country's ultimate sources of revenue—and diplomatic relations between the long-time neighbors appeared to be crumbling on a world stage. All this was happening as President Trump's tone toward China had appeared to of changed dramatically, and he didn't mince words as to why:

Now it also seems clear that two more carrier strike groups will become available in the coming weeks. The USS Nimitz is just completing its run-ups to deployment and USS Ronald Reagan, which is forward-based in Japan, will be available once again for deployment in the near term. There are also reports that the Carl Vinson Strike Group is now slated to be back in the Sea of Japan by around the end of the month.

It is very possible that attempting some sort of military action, or even applying extreme military pressure on Pyongyang in a coordinated and extended manner was deemed premature last week by the administration. This, along with China's efforts to get North Korea in check, may have left Trump's national security team with the reality that more time would be needed to move forward in both military and diplomatic mediums.

On the other hand, there is much talk that this was simply a communications blunder of fairly epic proportions—not just externally, but especially internally. If this were the case, it exposed key fissures in the military's chain of command and its ability to communicate with civilian leadership. It also makes it seem as if the administration does not know what the military is doing and vice-versa. This seems extremely odd considering that we are talking about the position of a carrier strike group here, not a small tactical anomaly or operation.

Although at first glance the onus would be put on the press for the mix-up, but as you can see by the statements made by top US government officials, there was every reason to believe that the Carl Vinson and her escorts were headed toward the Korean Peninsula, even by the Navy's own written statement.

The truth of the matter is that you couldn't watch the news—network or cable—or read a paper or an online news site without the carrier's repositioning orders being a major story—all week long. So how was it, that the thousands of people in the Navy involved with the carrier's movements, the messaging associated with them, and the area of operations as a whole, did not work to correct the error? This includes those onboard the carrier and her escorts who have access to satellite TV news.

So we are left with more questions than answers. Was this a case of 'the tail wagging the dog,' in which the administration and the Pentagon at large were working off of apparently unquestioned reports stemming from an inaccurate Navy press release? Or was this some sort of a disinformation operation that is yet to be publicly understood? We just don't know.

If the former is true, then that is a very scary thing. If the latter is the case, then we are possibly seeing the underpinnings of a much wider, far reaching and wily strategy concerning North Korea than we have grown accustomed to in the past.