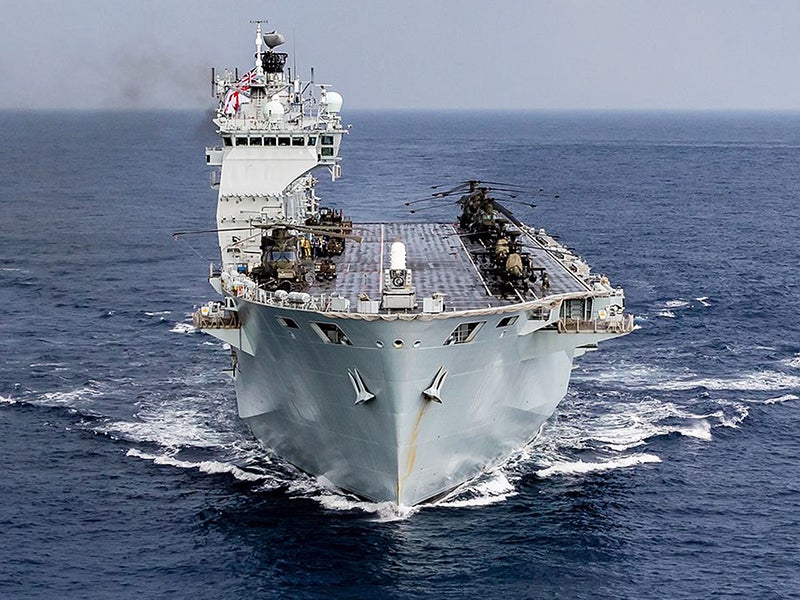 The amphibious assault ship and helicopter carrier HMS Ocean is currently the largest vessel in the Royal Navy—it's also the flagship of the fleet. With years to go before the first of the Royal Navy's two Queen Elizabeth class aircraft carriers become operational, the HMS Ocean—which isn't even 20 years old—is slated for retirement next year, and according to reports she might be sold off for a bargain price to Brazil.

HMS Ocean is a capable ship. She displaces 21,500 tons, was commissioned in 1998 and was just refit a few years ago. She can carry around 18 helicopters—but usually totes around less than a dozen—of various types, including large Chinook transports to Apache attack helicopters.

Since the canning of the UK's Harrier force, along with its carriers HMS Illustrious and HMS Ark Royal,

HMS Ocean has been the sole air warfare power projection vessel in the Royal Navy's inventory—with Royal Army Air Corps Apache Longbows providing the ship's over-the-horizon striking power. And this capability has been used successfully in combat before.

Although the UK's Apache force largely wrote the book on deploying the AH-64/AH Mk 1 to sea, HMS Ocean is meant to have a highly flexible air wing that can feature a composite of various cross-service, and even cross-national, helicopters depending on the mission. The ship is also built to execute amphibious assaults. In addition to her baseline crew of nearly 300, with another 200 attached to her air wing, up to 800 Royal Marines can be embarked at one time, along with 40 of their vehicles. The ship also carries four 51.5 foot landing craft (LCVPs) and has extensive command and control capabilities.

The Royal Navy gets a pretty big bang for their buck out of the relatively young HMS Ocean. She can do a lot of things, from anti-submarine warfare to amphibious assault, without the massive logistical footprint of a dedicated aircraft carrier. Above all else, the ship keeps the Royal Navy in the carrier game, which is not just a big deal geopolitically, but it is also significant when it comes to keeping skills needed to operate such a vessel fresh.

But under the MoD's often puzzling defense spending choices, the versatile vessel will be retired next year. Many have called for her to stay in service at least until HMS Queen Elizabeth becomes operational, while others have demanded she be put in reserve for contingency operations. But recently it seems more likely that the ship will be sold. Her young age, updates systems, relatively economic operating costs, and versatility making her an attractive purchase for cash-strapped naval arms with big ideas.

Brazil in particular appears to be interested in buying the ship. That makes good sense considering their antique aircraft carrier, the Sao Paulo, which was supposed to go through complex overhaul, has now been decommissioned due to its poor shape and the large sum of money it would take to get it back in operation. This leaves the Brazilian Navy without any sort of a flattop for the foreseeable future.

Sure, HMS Ocean cannot operate fixed wing aircraft like the Brazil's AF1 Skyhawks, but the need for that capability has been of debatable for some time now. HMS Ocean would provide a good mix of more usable everyday capabilities, like working as an anti-submarine and sea control platform or being able to quickly deploy Brazilian commandos ashore or deploying relief during a natural disaster. It would also work as the centerpiece of Brazil's small but significant amphibious assault flotilla, which is made of a hodgepodge of four second-hand vessels of French, UK and US origin.

Supposedly there is a fixed price offer from Brasilia for the ship for £80.3 million pounds ($100,950,000). That is less than the cost of a single F-35B that will fly from the HMS Queen Elizabeth's deck, and payment for the ship from Brasilia to London may be broken down in installments.

The Royal Navy has not confirmed that the deal with Brazil is done, but has alluded to the fact that "a number of options are being considered" including selling the vessel to a foreign government.

Helicopter carriers with amphibious assault capabilities have become somewhat of a hot commodity in recent years, with many navies procuring them with power projection in mind. The topic blasted onto the geopolitical stage in recent years following France's axed deal to provide a pair of Mistral class helicopter landing docks to Russia. Who should have bought the orphaned vessels was up to hot debate in the international press until it was announced that Egypt would be their new owners.

Suggestions that Canada, India, Vietnam, South Korea, Saudi Arabia, The Netherlands, New Zealand, Singapore, China and even NATO should buy the ships were posited in high-profile ways before the purchase by Egypt was announced. Brazil was also thought to have been an ideal candidate, although this was a couple years ago, when the Brazilian Navy still thought they would bring Sao Paulo back to life.

We will have to wait and see if any other bidders for HMS Ocean come to the table. A NATO ally would seem to be the ideal buyer for the ship, as its combat systems, communications and other support systems are meant to interoperate with the alliance's forces. Plus a low selling price point could be justified to the public as a move to enhance NATO's strength overall.

Then again the UK could just find the funds to operate the ship, at least until they can claim a replacement is active in the form of HMS Queen Elizabeth. The plan also puts into question how the Royal Navy will afford two 65,000 ton class aircraft carriers—and an all-stealth fighter fast-jet contingent to fill their decks—when they seem to be unable or unwilling to fund even a single medium-sized helicopter carrier—one that pulls in aerial assets from across the MoD's inventory.

Supposedly the budgets are in place to see both Queen Elizabeth class carriers become operational, but it will be interesting to see if HMS Prince of Wales—HMS

Queen Elizabeth's sister ship—will be sustained in an operational state over the long term. With HMS Ocean long gone by the time HMS Prince of Wales is supposed to become optional, sustaining one large fixed-wing capable carrier and one smaller helicopter carrier, and either putting HMS Prince of Wales in mothballs or selling it off, will not be an option.