The U.S. Army's Laser-Armed Stryker Has Blasted Dozens of Drones 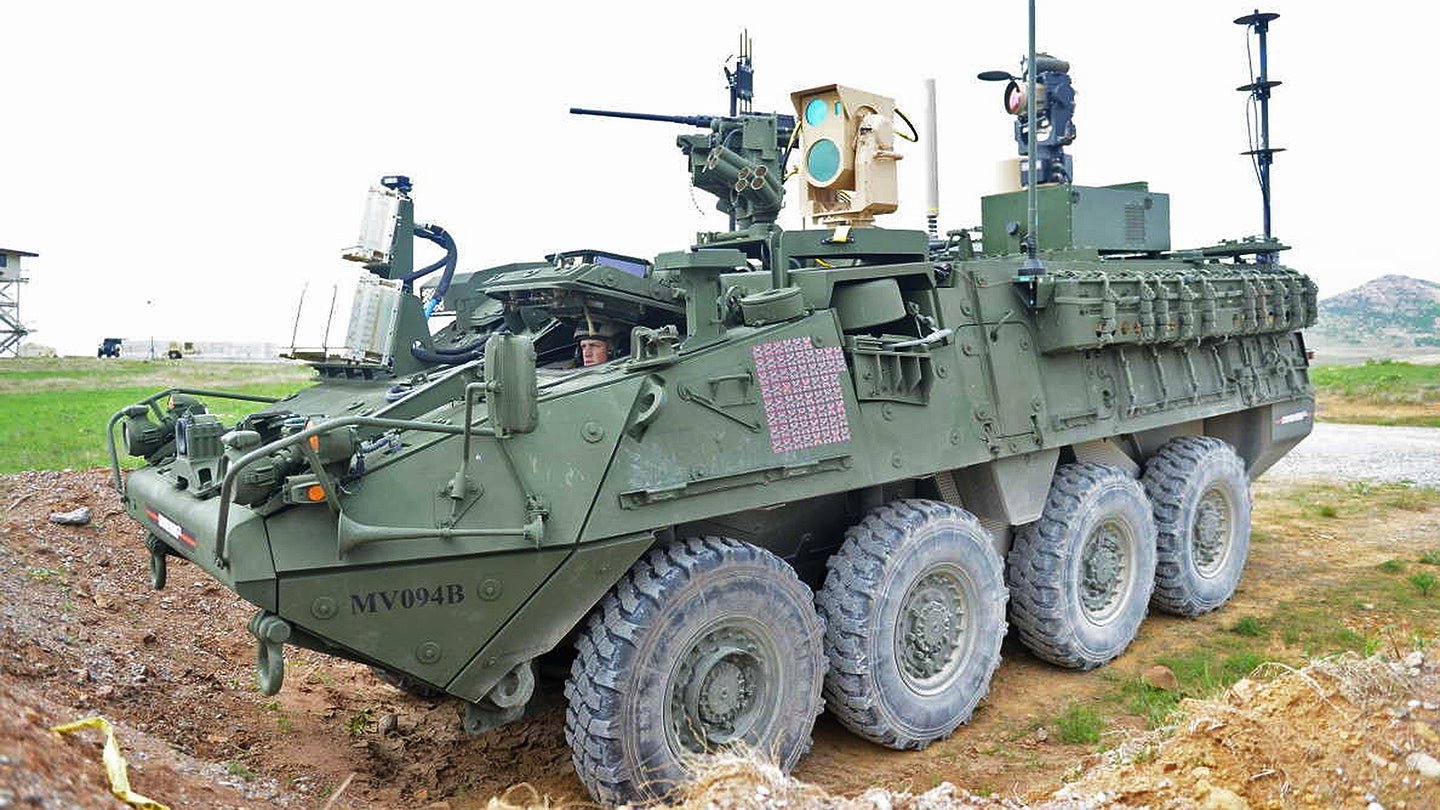 With terrorists, militant groups, and other potential opponents increasingly employing weaponized drones, the U.S. Army is becoming more and more concerned about the dangers unmanned aircraft pose to its soldiers. In one recent exercise, the service showed off one potential solution, a specially modified Stryker Infantry Carrier Vehicle (ICV) with a laser.

The Army rolled out the testbed vehicle, called the Mobile High Energy Laser (MEHEL), for the 2017 Maneuver Fires Integrated Experiment (MFIX) at Fort Sill in Oklahoma. The event ran from April 3rd through the 17th, during which the vehicle knocked out dozens of small quad-copters and remote control target planes.

“We were skeptical at first, when we were first briefed we'd be shooting down drones with lasers,” Army Captain Theo Kleinsorge, who commanded the MEHEL, told the service’s reporters afterwards. “We achieved a success rate well beyond what we expected we'd have and we are excited to see this go to the next step of the experiment, shooting beyond the horizon, and showing this technology can solve the problem.”

A basic Styrker ICV weighs in at nearly 16.5 tons, has a top speed of over 60 miles per hour on improved roads, and usually carries a .50 caliber M2 machine gun or a 40mm Mk 19 automatic grenade launcher. The MEHEL still has a machine gun, but its main weapon is a five kilowatt laser. On top of the laser, the vehicle had has powerful cameras to detect and track targets, as well as electronic warfare equipment. The latter system can try and crash an unmanned aircraft by jamming the signal from its control station, as well as try and pinpoint the location of those sites.

But the directed energy weapon was more than enough by itself to burn up commercial quadcopter and hexcopter style drones. Kleinsorge said his team blasted approximately 50 unmanned targets over the course of the practice session. For each one, soldiers applied a “kill” sticker—a red “X” behind the silhouette of the specific type of mock enemy—to the side of the unique Stryker. The crew added these existing markers from tests earlier in 2017 at White Sands Missile Range (WSMR) in New Mexico.

Of course, this isn’t the first time the Army has experimented using lasers to blow up small drones. During the 2016 MFIX exercise, engineers brought an earlier version of the MEHEL with a two kilowatt laser. Participants referred to the newer variant as MEHEL 2.0. Last year, the 10-kilowatt High Energy Laser Mobile Test Truck (HELMTT)—itself an improved version of the earlier High Energy Laser Mobile Demonstrator (HEL MD)—torched mock enemies, too.

“We absolutely blew lots of stuff up.” Adam Aberle, the HELMTT demonstrator program manager at the Army Space and Missile Defense Command’s Technical Center said at the time.

These latest results were both impressive and important, since the Army has become very eager to get systems like MEHEL off the test range and into the field. After the end of the Cold War, the U.S. military steadily pared down its short-range air defenses as the threat of an enemy air attack seemed to evaporate. Hostile aircraft haven’t attacked American troops since a bizarre incident in January 1968 when two North Vietnamese An-2 biplanes attacked a top secret U.S. Air Force radar site in Laos.

However, as commercial drones have gotten increasingly more sophisticated, they’ve become more attractive to both terrorists and state militaries looking for cheap aerial weapons. With relatively minor modifications, a quadcopter can become either a useful tool to spot enemy positions and help guide artillery fire or a deadly attacker in its own right. Islamic State fighters in Iraq and Syria are prolific users of these modified hobbyist drones, but Iraqi security forces have begun to follow suit. Similar arrangements have appeared in other hot spots such as Ukraine’s simmering civil conflict, where drones in general are an important tool on both sides.

The Pentagon has put these types of drones into what it calls groups one and two. Group one consists of unmanned aircraft that weight less than 20 pounds, fly no higher than 1,200 feet, and have a top speed of 100 miles an hour or less. Group two includes pilotless craft weighing in at between 20 and 55 pounds, which can reach altitudes of 3,500 feet, and have a maximum speed of less than 250 miles per hour.

“Group one and two presents the greatest challenges for Army forces,” according to Army Techniques Publication 3-01.8, Techniques for Combined Arms for Air Defense, which the service published in July 2016. “These systems are more mobile and less noticeable than dismounted scouts with the added benefit of greater standoff enhanced by electronic optics.”

In addition to concerns about their surveillance capabilities, the manual warned of drones dropping munitions, smashing into targets themselves, or simply harassing friendly troops or aircraft. With no dedicated anti-drone weapons in the Army arsenal at the time, the authors recommended trying to elude the small craft first before considering trying to shoot them down.

A vehicle like the MEHEL would give American commanders another purpose-built tool to destroy the intruders. Engineers hope the system would also allow soldiers to locate and then call in artillery or air strikes against a drone's ground control station. There have been reports that the U.S. military has employed powerful jamming aircraft in these roles in Iraq. In its daily recap of strikes, Combined Joint Task Force-Operation Inherent Resolve (CJTF-OIR) has reported more than one attack on Islamic State unmanned aircraft operations sites since the beginning of 2016.

And that’s not all the Army has in mind for lasers in the future. “Directed energy will hopefully very quickly see itself useful in the realm of breaching obstacle belts, in the realm of active defense, of not just shooting down [unmanned aerial systems], but the ability to destroy incoming anti-tank missiles, mortars, field artillery rounds, across the whole of what the counter-rocket, artillery, and mortar mission is currently,” Kleinsorge explained. Beam weapons could also help units reduce their logistical burdens, since they do not require a steady supply of ammunition.

Unfortunately, for directed energy weapons to be useful against drones or any of these other targets, engineers will have to continue working to make their effects reliable and consistent. One of the biggest problems for lasers and similar beams is their tendency to lose power over even relatively modest distances and suffer in cloudy, dusty, or similarly obscured conditions.

These difficulties have proven stubborn for Army engineers. In 2003, the Army sent a Humvee with a laser called Zeus to Afghanistan to zap mines, improvised-explosive devices, and other unexploded ordnance. The system, referred to variously as the High-Energy Laser Ordnance Negation System or the Humvee Laser Ordnance Neutralization System—both abbreviated HLONS—blew up more than 200 objects during that deployment. Two years later, the service reported that figure had soared to approximately 1,600 targets in exercises and field tests.

With systems like MEHEL, the Army appears undeterred by the inherent complexities of directed energy weapons and seems to be pushing steadily ahead. Off the ground, a podded laser is slated to be tested aboard an Apache attack helicopter, one that could usher in a whole new set of capabilities for the deadly choppers. But it remains to be seen how effective any of these systems might ultimately be outside an experimental setting.