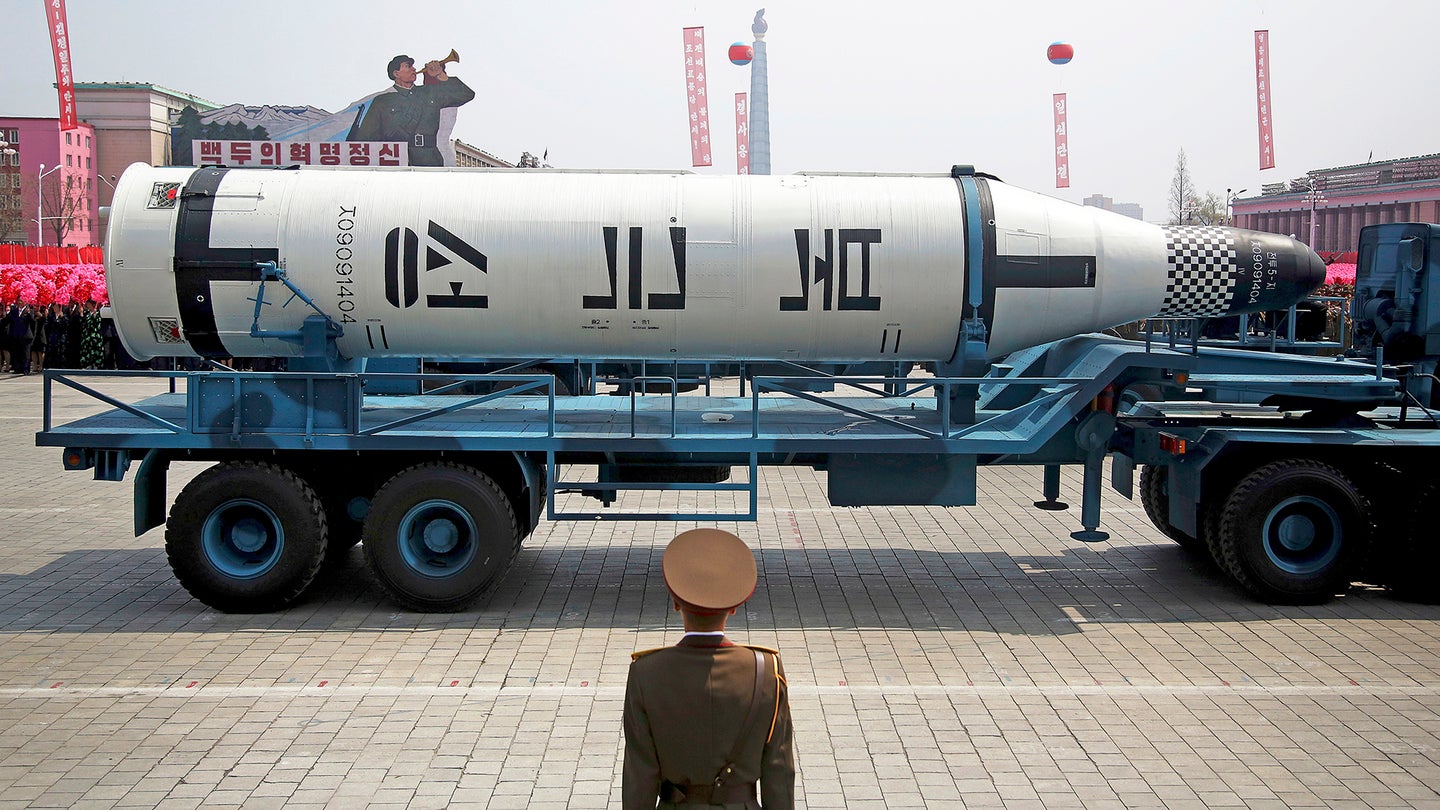 An unprecedented number eyes were focused on Pyongyang yesterday for this year's Day of The Sun military parade. Largely this was because the rhetoric between the US and North Korea has never been so hot, and there has been real posturing to go along with it. Intelligence agencies and journalists alike watch the display closely to see what new military capabilities the Kim regime will put on display, and as a result you probably woke up to headlines like "North Korea shows off sinister new ICBM" and the like.

It seems like many are quick to forget that this event happens on parade grounds, not a military technology testing and proving ground. Parades usually have floats, and big ominous looking missile canisters, and even missiles themselves, can be just that—elaborate displays—and nothing more.

Here's video of the whole parade:

We know what missile capabilities the North Koreans have actually tested, and what remains on their wish list. The War Zone was among the first to warn of Kim's changing missile development strategy, and we have followed every major launch very closely since.

There is no question North Korea has gained incredible momentum towards a true intercontinental ballistic missile and submarine-launched ballistic missile capability over the last year, but that doesn't mean rolling a big transporter-erector-launcher (TEL) with a massive missile canister on top proves that there is anything inside.

It is best to think of this event as a place at which Pyongyang can make their end-game aspirations a brief but synthetic reality—a blank canvas for which to paint their most deadly hopes and dreams.

So no, just because it rolls through Kim Il Sung Square does not make it real—at least not real yet. But that also doesn't mean that it is all fake—far from it. Once again, many of these systems are actually in testing, and outgrowths of their original designs are both logical and expected.

With these key caveats in mind, here is our breakdown of the parade's technological highlights:

Here is a good cheat sheet to remind you of North Korea's various ballistic missiles, there is even a more expansive list at the link to CSIS's Missile Threat website posted on the tweet below:

For the first time, North Korea publicly showed off its KN-11 "Polaris" sub-launched ballistic missile. This is a real system in development that has been successfully fired from the country's only Sinpo class submarine. The missile is thought to use solid fuel as a propellant and is in the medium-range class. Being submarine launched, it would be able to be fired outside the engagement zone of THAAD.

This tracked transporter-erector-launcher is a familiar system that carries another real missile system that is currently in testing—the medium-range, solid fueled KN-15. The missile is a land-based version of the KN-11 seen above, and was tested successfully just last February. Its tracked TEL would allow it to hide in many places, even far off-road, and its fairly mature state makes it one of North Korea's most credible emerging missile threats.

This Scud adaption that uses what looks like an early Scud-tracked TEL is interesting in that its nose section appears to have maneuvering fins. This would be an indication that North Korea is working on, or has, a maneuvering variant of the popular short-ranged ballistic missile.

The ability to make hard maneuvers during its flight makes intercepting the missile much more challenging, especially during the terminal phase of flight. Also, North Korea has long shown interest in anti-ship ballistic missile technology to counter US, South Korean, and Japanese naval power. Adapting the Scud to go after nearby threatening ships would seem like a logical, if not reaching move for the DPRK, especially since the capability is now proliferating to multiple countries, some of which are very friendly with North Korea (Iran).

This massive missile canister hauled by a simpler tractor-trailer TEL is for an unknown missile, although it could be for the liquid-fueled KN-14 ICBM that has been in development for some time. The missile is thought to be an outgrowth of the KN-08, but with a shorter, blunter ablative nose cone and featuring two instead of three stages.

The configuration is similar to that used by China for its DF-31 TELs. Currently the KN-14 may be North Korea's most credible ICBM program as components of the missile have been seen mocked up as a whole, and in storage at key North Korea's nuclear and missile sites. Still, there is no indication the missile has actually been successfully flight tested as of yet, although there are indications that a failed test may have occurred in October of 2016.

These impressive TELs, which we have seen in past April 15th parades, were seen this year carrying imposing launch canisters, and were the highlight of the display for many. Their appearance also resulted in plenty of news outlets proclaiming North Korea was showing off a new massive solid-fuel ICBM.

Once again, we are only seeing a canister and a pre-existing TEL here, and the canister it carries could have no intended occupant—and least not yet. On the other hand, it could show the intended configuration for an operational KN-08, which is longer than its KN-14 cousin having three distinct stages, or a missile based on it but having adopted solid propellant as a fuel source for even just one or two of its stages. The KN-08 missile, North Korea's largest (by length) land-mobile ballistic missile design, has been in development for years and has even been displayed on the same TEL but without a canister in the past.

On the other hand, sure, this could be designed to carry a massive, totally new solid fueled ICBM akin to Russia's road mobile configuration of its Topol ICBM. But really, that is unlikely in the near term, and like we discussed in the opening of this post, this TEL configuration is more likely a "blank slate" aspirational piece of propaganda and disinformation than a real system that will be entering into testing in the near term.

This missile is puzzling, to say the least. At first glance it almost appears to be a new version of the KN-08, but without its distinctive three-tier layout. Instead it seems that the missile is nearly un-tapered at its second stage joint, and its nose section has been completely remodeled. Upon closer examination it really seems more plausible that it is a lengthened BM-25/HS-10 Musudan IRBM. It is even being hauled around in a Musudan's TEL. Not just that, but it matches the black and white paint job of Musudan missiles that have been test fired over the last year.

Even though its success record remains poor, the Musudan has been successfully test fired, and this new and improved version would be a threatening development for the region. There is also the possibility that this new version could use solid fuel for its upper stage.

The inclusion of what appears to be a coastal defense system built around a land-based version the Kh-35 anti-ship cruise missile was also a major point of intrigue during the parade. It was fairly recently discovered that North Korea had received the type from Russia in the mid-1990s. North Korea has since put its own knock-off into production, which it has also exported. Now it looks like they put the missile to use in this system. The TELs tracked configuration would allow it to rove rugged areas of the North Korean coastline, making it exceptionally hard to target and kill.

Like the aforementioned Scud with potential anti-ship aspirations, the existence of this coastal defense system is another tell that North Korea is working to, or at least wanting to, build out an anti-access/area-denial strategy to a greater degree than it ever has in the past.

North Korea's indigenous Pokpung-ho main battle tank appears to have been upgraded with some sort of remote anti-aircraft turret housing a pair of SA-16 Igla man-portable air defense system (MANPADS) missiles. It is unclear how target acquisition would work, but one would think it has a camera to lock onto low flying enemy aircraft, namely US and South Korea attack and reconnaissance helicopters.

On the right side of the turret (as pictured) there is also what appears to be two anti-tank missiles, likely the locally built and somewhat archaic "Firebird" system, which itself is developed from the generations old 9K111. Supposedly the system recently received a laser-guidance upgrade.

This ground mobile point air defense system appears to be new, at least to my eyes. It is unclear what type of missiles it uses, although some sort of indigenous command-link guidance and boosted variant of the SA-16 is possible. Still, those strange looking nose elements of whatever is inside the launchers are odd. Also it is unclear how the system would search for targets. Maybe that is a radar array above the left side launch canister that pops up and rotates.

These soldiers have the primary mission of infiltrating behind South Korean lines via tunnels, submarines and An-2 biplanes to wreak absolute havoc on the South Korean populace during a time of open warfare between the two estranged countries.

Last but not least, here is a good look at the S class armored Mercedes limos that port around Kim Jong Un and his top staff.

What were your thoughts of the display? Did I miss anything else worth noting? Let's discuss in the comments section down below.