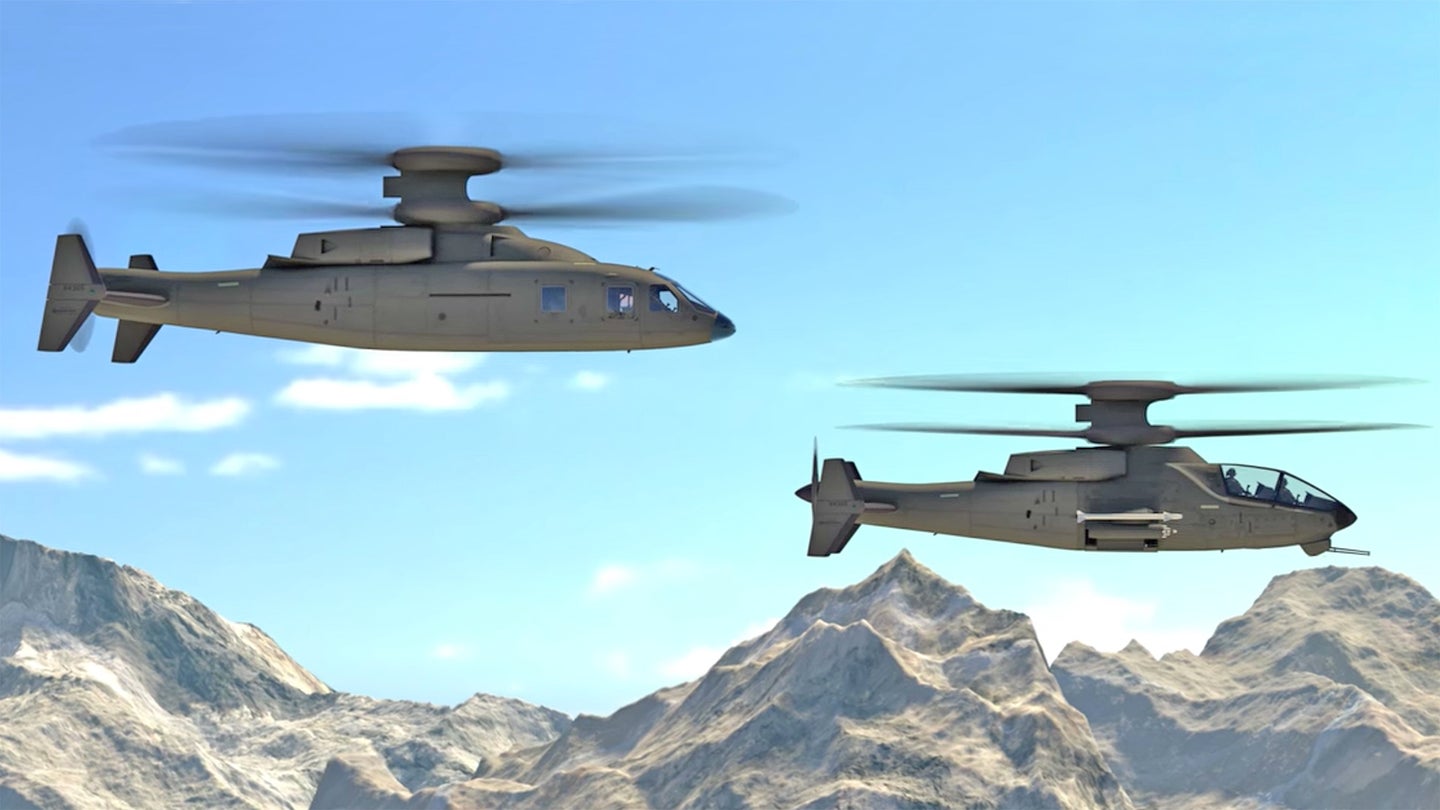 Sikorsky and Boeing have offered the first peak at their concept for a new gunship helicopter. The two companies are pitching the rotorcraft, based on their existing SB>1 Defiant transport design, to the U.S. Army as part of the Future Vertical Lift (FVL) program.

On April 10, 2017, Lockheed Martin, which owns Sikorsky, posted a sales video online that included a depiction of the “attack variant” of their FVL – Medium (FVL-M) contender.  The Army specifically wants the FVL-M to replace both the UH-60 Black Hawk transport helicopter and AH-64 Apache gunship. It has not specified whether or not the transport and attack versions need to be based on the same aircraft, but obviously this would be very beneficial, and Sikorsky and Boeing appear to have chosen to develop two separate, but highly related designs with common components.

The new pitch explains the new model will share engines, drive train, rear propeller and control surfaces, fuel tank, various internal avionics and electronics, and more with the SB>1 “assault” helicopter. However, the 3D-animated teaser does not give any specific details about the new gunship version or show off a real-life prototype or mock-up.

In 2015, Sikorsky and Boeing first announced they were teaming up to build a rotorcraft for the Joint Multi-Role Technology Demonstration (JMR-TD). This project is supposed to serve as a lead in effort for the larger, long-term FVL plan. This partnership led to the SB>1 Defiant, the unusual nomenclature standing for “Sikorsky and Boeing are greater than one.” A compound helicopter with a push-propeller and co-axial, rigid rotors, the firms boasted this new aircraft would be significantly faster than traditional helicopters, more maneuverable, more stable while hovering, and quieter.

According to the April 2017 video, the final transport version will have a cruising speed of at least 280 miles per hour and handle so-called "hot-and-high" conditions with ability to hold a hover high off the ground in so-called at altitudes up to 6,000 feet and temperatures up to 95 degrees Fahrenheit. If these figures prove accurate, one imagines the more nimble-looking gunship model would have at least similar capabilities, which would be a significant improvement over existing attack helicopters. The U.S. Marine Corps AH-1Z Zulu Cobra has a max cruise speed of 184 miles per hour, while the Army’s larger AH-64D Apaches top out at 182 miles per hour. More speed would almost certain equate to more range for the new Defiant-based attack helicopter, as well. The AH-1Z has a combat radius of less than 150 miles and the AH-64D can fly about twice that distance under combat conditions before running low on refuel.

But, from the video, the weapons arrangement looks to be no different from traditional attack helicopters. The proposal has a chin-turret with an automatic cannon that looks very much like the three-barrel, 20mm M197 gun on the Marine Corps’ AH-1s. As with both the AH-1 and AH-64 series, there are two stubby wings with four external stores pylons for various ordnance and two launch rails on the tips for air-to-air missiles – in this case the artist appears to have mounted AIM-9X Sidewinders – are on either side of the fuselage. In one of the frames, it appears that two of those racks may actually attach directly the chopper’s main body.

These features are notable, since the last time the two defense contractors worked on an armed helicopter for the U.S. military, the result was the abortive RAH-66A Comanche. This stealthy rotorcraft had complex internal weapons bays to keep the aircraft’s radar signature as low as possible. The Defiant attack variant concept appears to be significantly more conservative when it comes to low-observable characteristics. Of course, all of this is undoubtedly subject to change as the joint venture gets to work on an actual, flying version.

Regardless, both versions clearly draw heavily from Sikorsky’s X2 and the S-97 Raider armed scout helicopter. In 2008, the Connecticut-based helicopter maker unveiled the X2 as a high-technology demonstrator, with many of the features now on the SB>1, such as active vibration control to reduce noise. That development ultimately morphed into the Raider private venture.

Sikorsky had initially pitched this rotorcraft to the Army as a replacement for the OH-58D Kiowa Warrior scout helicopters. The service’s abrupt decision to ditch the Kiowas for Apaches effectively killed that plan. Concepts for the Raider had featured two traditional side-mounted weapons pylons and space inside for six combat troops. Now it appears, Sikorsky and Boeing have split that idea into two distinct FVL-M subtypes, though it still supposedly intends to market the S-97 separately.

Both Defiant types will also benefit from decades of work at Lockheed Martin, Sikorsky, and Boeing, as well as other firms they had outright purchased in the past, such as Piasecki. Sikorsky itself became a subsidiary of Lockheed in 2015. These companies were responsible for numerous earlier military projects involving compound helicopters, including the AH-56 Cheyenne, the X-49A Speedhawk, the XH-59A, and RAH-66.

By the end of 2017, the Army hopes to have started flight tests of at least one SB>1 prototype, and as its primary competitor, Bell Helicopter's V-280 Valor. On April 10, 2017, Bell said its aircraft, a tilt-rotor derived in part from the V-22 Osprey, was 95 percent ready for those trials. Bell has shown plans to develop a more unified design that can perform both transport and attack duties depending on its configuration. According to Bell, the Valor has the same hot-and-high performance as the Defiant, but boasts a top speed 40 miles per hour faster than the Sikorsky-Boeing product.

Boeing split from their long time V-22 partner, Bell, for the FVL tender, instead teaming up with Sikorsky. At the time this seemed to be a damning indictment of the V-280 Valor concept and its tilt-rotor technology, but Bell has continued with the program and it has drawn big interest from the Pentagon and foreign governments alike.

Bell's own artwork and teasers have depicted gunship versions with missiles launchers that retract into the fuselage or are otherwise hidden behind sliding panels. One 2013, video also has a version with externally-mounted rocket pods and a chin-mounted cannon or machine gun, too.

With these relatively close performance specs, a compound helicopter that is closer to a existing designs and footprint might present a more cost-effective option than a tilt-rotor. Historically, the costs and complexities of tilting wing aircraft have been considerably higher than conventional aircraft or helicopters. In 2015, Japan became the first foreign customer for the Bell-Boeing V-22 Osprey, despite decades of steady improvements to the design and repeated reports of interest outside the United States.

And cost is likely to be the biggest determining factor in the project. Recent Pentagon budgets have trimmed Army plans to buy additional conventional helicopters to meet existing operational demands and threatened to steal funds from future-focused projects like JMR-TD and FVL. In 2014, the service began investing in the UH-60V upgrade program in hopes of freeing up money for more advanced programs.

At a hearing in February 2017, Army Vice Chief of Staff General Daniel Allyn complained that there still might not be enough money to reliably sustain the helicopter fleets he already had, let alone modernize. Funding shortfalls and the need to prioritize other programs were among the factors that led to the controversial decision to send all of the Kiowas to the boneyard.

“Our multiyear programs for our aviation fleet are all on the floor,” Army Vice Chief of Staff General Daniel Allyn complained to legislators during a hearing in February 2017. “We cannot operate that way … And yet year over year, we’re put into this dilemma.”

So, while Sikorsky-Boeing and Bell are pushing ahead with their plans, it’s not clear what the exact market will be for aircraft like Defiant and Valor, beyond fulfilling possible niche capability demands, even as the technology continues to mature.