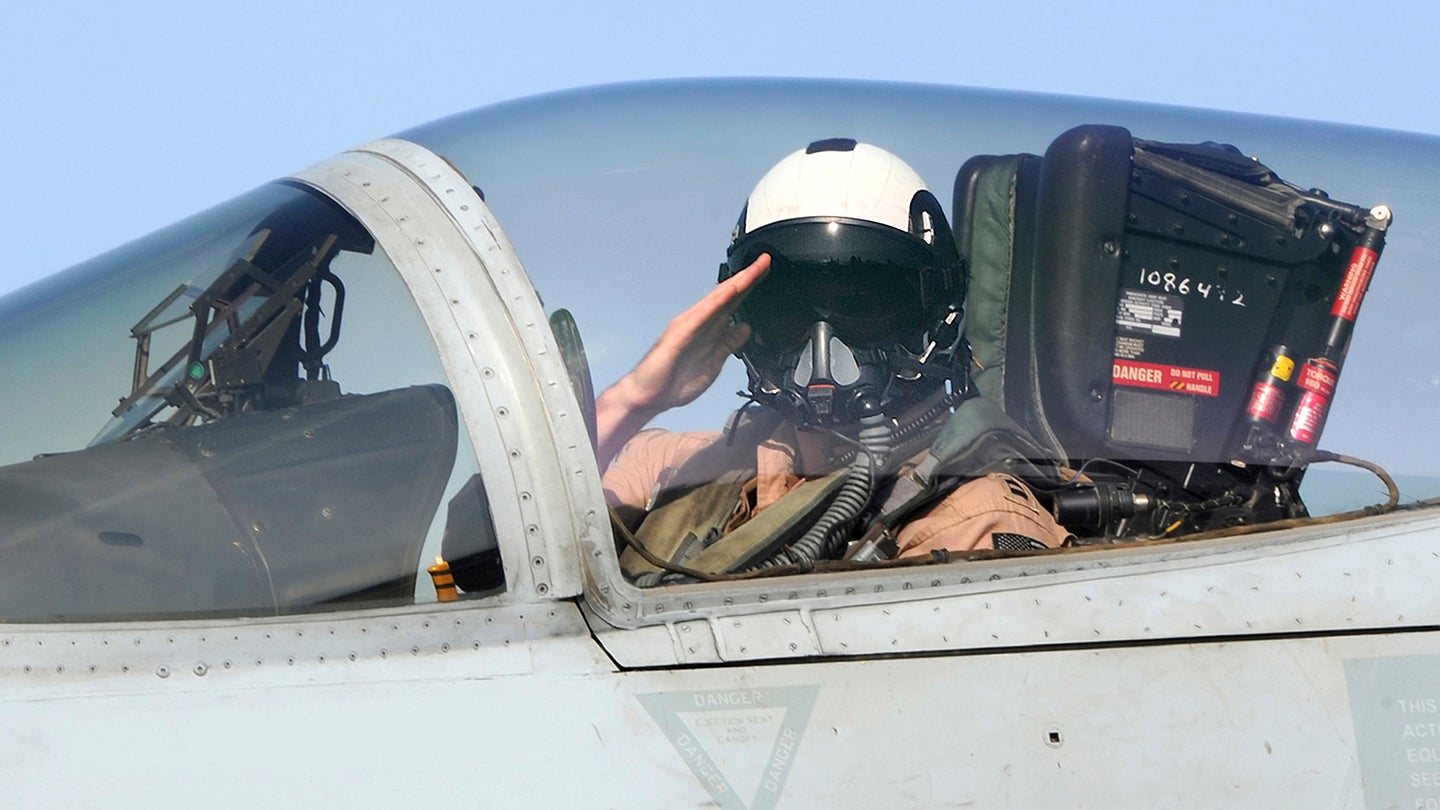 Being hypoxic in a military fighter jet is no joke. Back in 2010, my pilot and I were returning from a training mission in the southern California desert when we noticed the cabin pressure gauge in our F/A-18D Hornet had spiked to nearly 20,000 feet. This was essentially our current altitude—and not a good place to be if you do not have supplemental oxygen. To complicate matters, I was not wearing my oxygen mask on our transit back from the training area. Normal cabin pressurization hovers around 8,000 feet, so my habit (like many others) was to not wear supplemental oxygen when in a purely administrative flying mode. Big mistake.

I noticed pretty quickly that I could not say or remember my flight's callsign. I fumbled with connecting my mask for what seemed to be eternity. In reality, it was probably only about 10 seconds but my hand dexterity had diminished. The lack of oxygen to my brain turned a simple task into a very difficult one. Once I was able to properly secure my mask and receive a good flow of air, using supplemental oxygen from the jet did not immediately remedy my affects. I still felt sluggish and slow. Thankfully, my pilot had his oxygen mask on the entire time and said he felt fine.

NATOPS procedures require an emergency descent below 10,000 feet to get the jet and cabin to a safer altitude. We quickly descended at a rate of about 6,000 feet per minute, while our wingman followed us down. This was not a comfortable situation, as the terrain rises steeply into mountains just east of MCAS Miramar. After about a minute below 10,000 feet, I began to feel normal, but the resultant lack of oxygen was a shock to the system, and a clear indicator that hypoxia onset is quick, debilitating, and potentially deadly. My situation is referred to as “histotoxic hypoxia,” which is the disorienting feeling associated with lack of oxygen.

I tell this story to let folks know the recent issues with F/A-18 Hornet cabin pressure and oxygen incidents are nothing new. More importantly, I am scared for my fellow F/A-18 Hornet and T-45 aviators and I know something must be done to correct this situation.

Naval Aviators are climbing into a machine that may kill them—and it’s not from what you may think, say, a surface to air missile or an enemy fighter. Because of a recurring problem with the oxygen and cabin pressurization systems—more commonly known as OBOGS, which stands for On-board Oxygen Generating System—in the Navy’s F/A-18 fighters and T-45 trainer jets, an alarming increase in episodes of hypoxia for aircrew have occurred. Hypoxia is a deficiency in the amount of oxygen to the body which can lead to fatal consequences. This problem has become so serious and frequent, T-45 flight instructors boycotted training flights last week.

The biggest concern is that this is a glaring safety issue beyond what is an already dangerous job. A job that includes night arrestments on aircraft carriers and dropping bombs in hostile areas of Iraq and other locations we cannot speak about. Now, naval aviators are having to deal with malfunctioning equipment that is truly a silent killer—causing lack of precious oxygen in the cockpit, and to air crews' most important instrument—their brains.

Unfortunately, the Navy admits progress on solving the issue is currently at the head-scratcher stage. But the real question is this: Has Naval leadership and engineers at Naval Air Systems Command (NAVAIR) really done all they can do to try and solve the problem? It's not like they haven't had a great deal of time to come up with a fix.

According to testimony from Navy leaders to Congress this week, "Since May 1, 2010, all models of the F-18 show steady, yearly increases in the number of physiological episodes." The Navy has investigated 382 cases of physiological episodes induced from the F/A-18 system. Investigators have determined failures occur in two main categories: breathing contaminated air and loss of cabin pressurization. According to the Navy, 130 incidents involved some form of oxygen contamination while 114 involved a failure of the jet's system that maintains cabin pressure.

Every naval aviator goes through altitude chamber training so they can recognize early onset of hypoxia caused by cabin depressurization. The instructors take the chamber up to 25,000 feet where trainees remove their masks and then try to play a simple game of patty-cake. The results are both humbling and hilarious. Most folks can’t clap their hands together after about 15 seconds. Continued oxygen deprivation at those types of altitude leads to an unconscious state and ultimately death. It is safe to say that quickly recognizing hypoxia is a critical element to staying alive—even for private and commercial jet aircrews.

For the record, cabin depressurization is what killed professional golfer Payne Stewart and his fellow passengers back in 1999. In a strange twist of fate, Payne joined me and 15 other trainees in the Navy’s pressurization chamber as we were going through altitude training together back in 1998. The 1991 and 1999 US Open champion had been invited to ride in a Navy F-14B as part of a morale, welfare, and recreation event. He followed up his Tomcat ride by playing nine holes at the NAS Oceana golf course, where the crowd followed as he talked about each shot. The Tomcat did not have an OBOGS system, but relied on pure oxygen instead.

OBOGS provides oxygen rich breathing gas to the aircrew using engine bleed air that is cooled and then routed to an OBOGS concentrator. Inside the concentrator, nitrogen is removed using two molecular sieve beds—commonly known as “kitty litter." The resultant cleansed air is then pumped to the aircrew. The system provides a continuous supply of oxygen, avoiding the need for constant replenishment of liquid oxygen like in the F-14.

Today’s fleet naval aviators appear to be getting a good old fashioned run around as no current solution for repairing OBOGS currently exists. Vice Admiral Mike Shoemaker admits that the oxygen issues are “the number one safety priority." But he also admits there is “no smoking gun” they can find to solve the problem. With a problem that has been going on for greater than seven years and shows no signs of slowing down, one would think there was at least some concerted effort to indicate what is causing the problem with OBOGS.

The only known treatment for the issue has been to regularly change out the kitty litter. In addition to increased aircrew training, the Navy has also gone so far as to install a decompression machine onboard deploying aircraft carriers. Both of these solutions seem to be only treating the resultant issues and not the actual causal factors. It is time for a far more concerted effort to defeat this problem.

NAVAIR must take a critical look at data from a much larger cross section of jet flights. The problem appears to be with the system and not jet specific—as even the latest Super Hornet, the EA-18 Growler, has reportedly had issues. A small sampling of data from only a few training command flights is not enough information to determine the causal factors across the fleet. Additionally, pilots must report after every flight how the system worked—or did not work—along with critical flight parameters. Maintenance teams will need to track and periodically check OBOGS potentially after every fight. Maybe this is already being done, but naval leadership has not communicated up and down the chain of command what the plan is to solve this problem. Lack of communication has led to some serious consequences and I personally applaud those T-45 instructors who took a stand.

I don’t personally have an answer to this problem, but I do know that time is no longer on a Naval Aviator’s side with the OBOGS issue. Delayed production of the F-35C (and ultimately a reduced number of purchase Lightning IIs) means the Hornet and Super Hornet, along with its OBOGS problems, are here to stay. To Naval Aviation leadership’s credit, there has not been a “fly or else” mentality towards pilots who have to climb into those machines. However, not flying over the long term is simply not an option. Solving this problem is going to require an all hands effort from pilots, engineers, and leadership. It must or it will be just a matter of time before we will lose someone.

Joe "Smokin" Ruzicka is a valued contributor to The War Zone. His prior works are a must read, you can find them here and here. Joe was a Radar Intercept Officer in the F-14 Tomcat and Weapon Systems Officer in the F/A-18 Hornet with over 2,000 flight hours in fast jets. Joe was also a part of the final F-14 demonstration aircrew, as well as being Legislative Fellow to John McCain and worked in Washington DC on critical US Navy programs on behalf of the US Navy. You can keep in touch with him by following him on Twitter at @smokinjoe96.