The program squeezes more life out of old Black Hawks via the installation of new "glass" cockpits where analogue gauges once were. 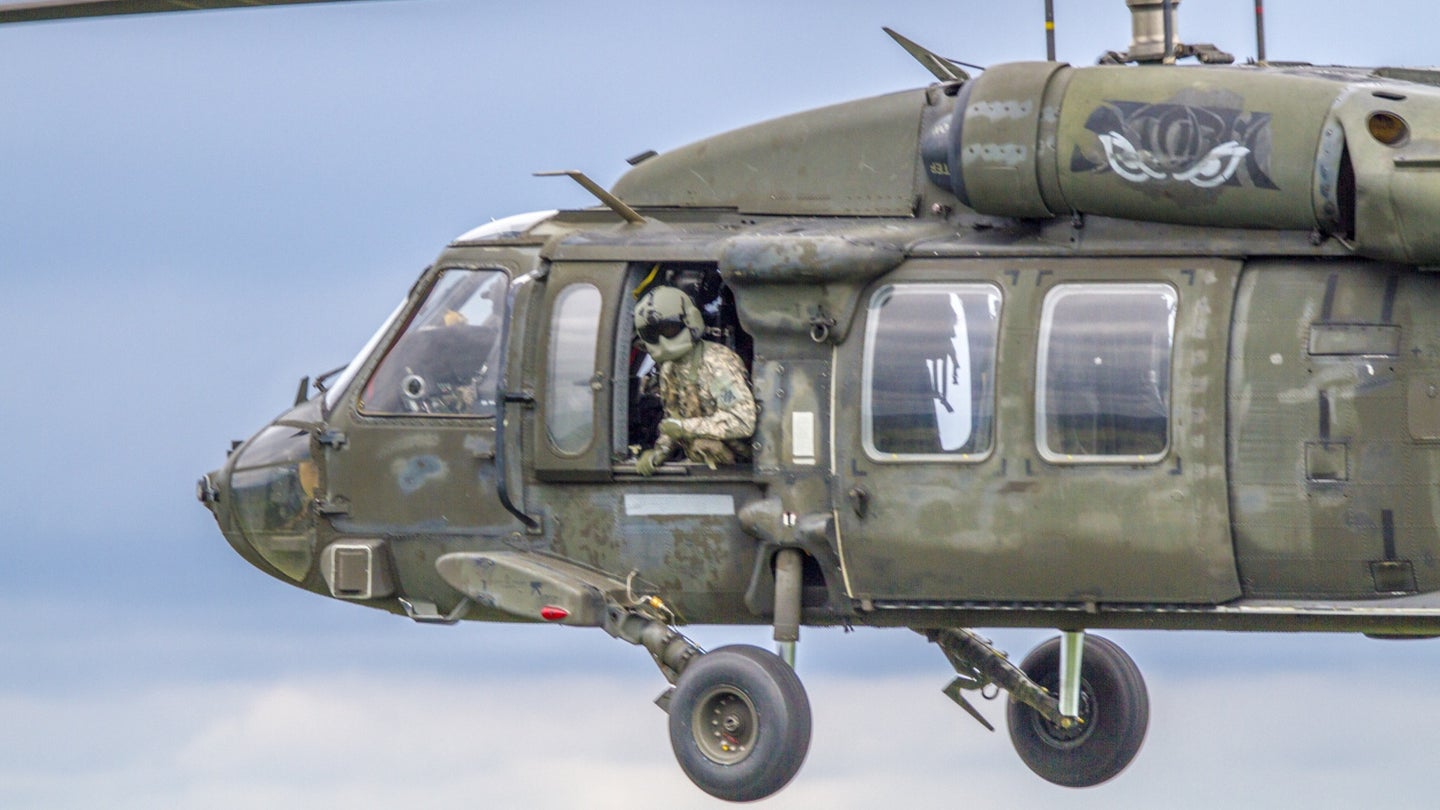 The U.S. Army is making progress on a program to upgrade older Black Hawk helicopters and extend their service life with all-new digital cockpits. The service hopes the plan will improve fleet readiness, ease training requirements, and most importantly help save money.

On Jan. 19, 2017, the first prototype UH-60V Black Hawk made its first flight in Meridianville, Alabama. More than two years earlier, the Army had started outlining the requirements for the new version of the iconic helicopter.

“What we’re doing is taking out the old cockpit, all the analog gauges, and we’re replacing them with state-of-the-art multifunction … displays and all of the computing hardware to go along with that,” Lieutenant Colonel Andrew Duus, the H-60 product manager at Army’s Program Executive Office Aviation, told National Defense in April 2017. With the V model, aviators will “have greater situational awareness in the cockpit and it also reduces their workload in the cockpit and allows them to focus more on accomplishing their missions.”

The UH-60V is an improved version of the UH-60L, which first entered Army service in the late 1980s. While previous upgrade projects added improved communication and defensive systems, GPS-navigation equipment, and new weapons, there had been no changes to the aircraft's cockpit controls and displays.

L variant pilots did have a GPS-enabled moving terrain map, but it was not part of the helicopter itself.  Aviators had to wear this digital kneeboard strapped to one leg during operations.

“You had to divide your attention constantly between … the analog gauges which were located in various spots on the dashboard, down to your leg where the kneeboard resided for you to see the moving map,” Duus explained.

The final product gives the helicopter a control setup functionally identical to the one inside the UH-60M, which the Army began buying in 2007. Northrop Grumman is supplying the all-new “glass” cockpit with four large multi-function displays for the UH-60V. Contractor Redstone Defense Systems (RDS) has been responsible for actually installing the equipment at the Army's Aviation and Missile Research and Development Center (AMRDEC) Prototype Integration Facility (PIF) at Redstone Arsenal in Alabama.

Under the existing plan, RDS will ultimately build three UH-60Vs for tests and develop a standard procedure for fitting the new equipment. Then, the company will send two complete upgrade kits to Corpus Christi Army Depot in Texas, where the Army already does a significant portion of its Black Hawk maintenance. There teams will craft two more V models evaluate how easy it really is to rebuild older aircraft with the new equipment.

Ultimately, the Army wants to convert more than 750 UH-60Ls into the improved models. At the same time, it will finally start retiring up to 600 aging UH-60As, dating back to the 1970s.

With more commonality between the remaining Black Hawks, the service should be able to reduce maintenance requirements. As it stands now, units with UH-60Ls have significantly different needs, both in terms of expertise and replacement parts, from those with UH-60Ms. In addition, the Army has to have repair crews trained to handle both analog and digital systems and large stockpiles of both sets of equipment. In an actual conflict, this could quickly become a logistical nightmare.

The Army also expects the UH-60Vs to reduce strain on pilot training. Since Northrop Grumman’s cockpit will work much the same way as the one in the UH-60Ms straight from Sikorsky, new aviators will no longer need to go through variant specific courses to learn the controls.

“For the aviator, you’re going to be able to go from a Victor to a Mike model or vice versa, and the buttons you push are going to be in the same spot,” Duus said. On top of that, pilots won’t necessarily have to go through refresher sessions, or at least not nearly as many, when they go to a new unit with a different type of Black Hawks.

But by far, the biggest goal of the UH-60V project is saving money. In the face of budget caps and cuts, for the 2017 fiscal year, the Pentagon proposed a budget that trimmed $800 million from the UH-60M program, almost cut planned purchases in half in the process. The Army had wanted to buy 60 of the M models, but only had money left for 36.

“Our multiyear programs for our aviation fleet are all on the floor,” Army Vice Chief of Staff General Daniel Allyn told legislators during a hearing in February 2017. “And yet year over year, we’re put into this dilemma.”

The UH-60V offers features similar to the UH-60M at a fraction of the cost. The Army hopes it will cost approximately $4 million to update each L to the new version. The service has been buying brand new M variants for $16 million. If the upgrade package works out, the immediate need for new aircraft would go down significantly. Its also possible that if the project is successful, the other services or foreign partners might want to join the program and buy their own kits, further reducing the unit costs. The Army could then shift any of the money it saves around to other, longer-term aviation projects.

“Establishing a program like 60 Victor just allows us to be fiscally smart as we set our sights on Future Vertical Lift and other capabilities like … the improved turbine engine program,” Duus noted. The Army’s plan is the eventually replace many of its existing helicopters, not just the UH-60 family, with one or more clean-sheet designs as part of the Future Vertical Lift (FVL) project. These new aircraft could be helicopters, tilt-rotors or other designs.

Unfortunately, replacing the cockpit architecture in the UH-60L won’t do anything to improve the helicopter’s overall performance. Though the series has seen steady improvements, the basic shape and structure of the Army’s Black Hawks has not changed significantly in 30 years. The UH-60M is still using the same engine as the UH-60L. And troops only carrying more gear and vehicles are only getting heavier.

“Years ago, four Black Hawks could move a platoon,” Army Major General William Gayler, head of the Army Aviation Center of Excellence at Fort Rucker, Alabama, told the service’s reporters in December 2016. “Now, it takes eight or nine and, by 2020 – assuming the linear weight increases continue at the current rate – it will take 15 to 20.”

The Army was well aware of this when it drafted the requirements for the UH-60V. The new cockpit was always supposed to just be “tier one” of a multi-stage upgrade program. A notional “tier two” Black Hawk, dubbed UH-60(X), would have more substantial changes.

“The second tier will focus primarily on performance related capabilities needed to support the Army Vision that cannot be achieved today within acceptable cost, schedule and risk constraints,” according to a December 2014 report. “The achievement of tier 2 performance levels will rely on the development and qualification of technology that is currently not available.”

The Army is already planning to put any cost savings from the UH-60V project into a broad Black Hawk engine upgrade program. The goal of the Improved Turbine Engine Program is a better, common engine for both the UH-60 and the AH-64 Apache attack helicopter. The new motor, or a variant thereof, could even end up in Future Vertical Lift prototypes.

But that’s still a long way off. The Army doesn’t even expect to have started engineering and manufacturing development of the turbine before 2023 at the earliest. In the meantime, the service plans to field the hundreds of upgraded UH-60Vs between 2018 and 2023. By the time the last V model arrives, it still entirely possible they’ll all have to go right back to the depot to get new engines.