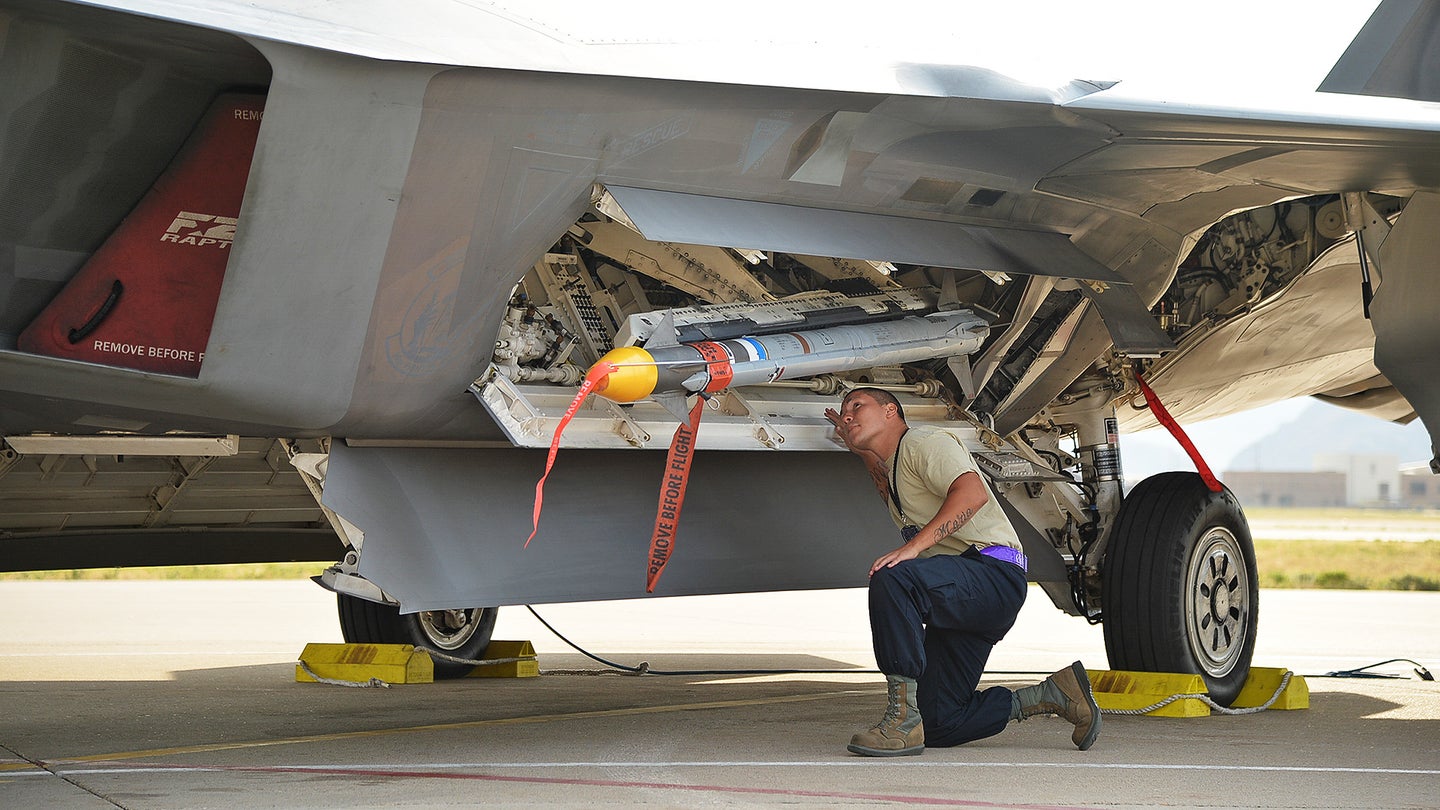 The USAF is quick to tout that the F-22 Raptor fleet has been finally upgraded to use the AIM-9X Sidewinder—a long awaited move that will allow the most advanced air superiority fighter in the world to ditch the relatively ancient AIM-9M version of the iconic short-range air-to-air missile. But even with this new capability, F-22 pilots still lack a helmet mounted display (HMD) to take advantage of the missile's high-off boresight (HOBS) abilities, and there doesn't seem to be much talk about fixing this long standing deficiency in the near term.

You can read all about the F-22's short-range missile and helmet mounted display fiasco here.

There is no doubt that adding basic AIM-9X capability to the F-22 is a significant upgrade over what the AIM-9M had to offer. Some F-22s have had the ability to carry the missiles for about a year or so, but the software to deeply integrate with the jet and give the pilot the proper symbology to easily employ it was only installed with the Increment 3.2B software that is now being made available to the Raptor fleet.

The AIM-9X Block I has bit longer range, it's faster, has a wider field of view, much higher maneuverability and a far better imaging infrared seeker that is very tough to fool with existing countermeasures than its Cold War era AIM-9M predecessor. The missile can even be used against ground targets in a pinch if the jet has the right software. Defensetech.org recently spoke to an experienced Raptor pilot with the 95th Fighter Squadron about this new arrow in the F-22's quiver:

“With the AIM-9M ‘Mike’ we kind of went out there going, ‘We have six missiles'... With AIM-9X, we step out the door going, ‘We got eight missiles on the jet.’ It’s literally that big of a difference… Night and day different... It brings us on par with most of the other infrared missiles around the world.” He also added that the AIM-9X gives Raptor pilots the ability  “shoot a lot further with better tracking capability out of the seeker.”

"This has been in the inventory for the Air Force and Navy for some years; it's nothing new to the military. But to put it on the Ferrari of aircraft—the F-22, the most advanced aircraft we have—it gives the pilots more maneuverability, larger range, and it's a much faster missile."

But now that the Raptor finally has widespread AIM-9X capability, it seems that the USAF is still putting off giving Raptor pilots the "point and shoot" ability that goes along with this new missile, not to mention the enhanced situational awareness that a Helmet Mounted Display provides. In essence, the missile's most important feature, its ability to engage targets even over a pilot's shoulder, still cannot be unlocked by the Raptor, even after both the AIM-9X and F-22 have been operational (although separately) for well over a decade and other far less technologically complex fighters, like the F-15C/D and F-16C/D have had such a capability for just as long a time.

Instead, the Raptor will wait for its next round of upgrades around 2019, which will allow it to field the AIM-9X block II. This second iteration of the AIM-9X is already operational and features lock-on-after-launch capability. This will allow Raptor pilots to engage a target without locking the AIM-9X's gimbaled seeker onto that target before firing. The missile is equipped with a data-link and upgraded autopilot that receives information from the launch aircraft as to where the target is located in space and time so that it can fly-out toward it once it has left the jet's launch rail. In some cases, the missile can make a nearly 180 degree turns to engage targets behind the aircraft, and then lock onto them once headed in that opposite direction.

In the F-22's case, this means the AIM-9X Block II will not have to be shoved out into the airstream so that the pilot can obtain a hard lock before letting the missile fly. Instead the Raptor's side weapons bay doors can remain closed until the command to launch is given—and in doing so the F-22 can remain stealthy longer during the weapons engagement portion of a dogfight.

But once again, for close-in dogfighting, instead of relying on a pilot to point his eyes at the target through a HMD in order to engage said target, the AIM-9X Block II will rely on the F-22's sensors—primarily its APG-77 AESA radar—that has roughly a 120 degree frontal field of view—to provide cueing and telemetry to the missile's data-link. This is called "helmetless high off bore-sight" (HHOBS) capability. It may be possible to leverage information from the jet's ALR-94 electronic support measures suite, and from third party sensor sources, such as other F-22s and even AWACs aircraft when employing the AIM-9X Block II in lock-on after launch mode, although at close range this is doubtful.

But once again, the Raptor will not take advantage of the missile's full engagement envelope without giving its pilot a HMD. Not just that, but the F-22 lacks a spherical infrared sensor system like the F-35 Distributed Aperture System that could potentially provide directional cueing for the AIM-9X Block II even without the F-35 pilot's highly advanced Helmet Mounted Display being pointed at the target.

For the HMD lacking F-22, where the AIM-9X Block II will really shine is in its ability to reach out and kill targets at intermediate ranges—much farther than its predecessor due to a new rocket motor design and lock on after launch capability. In essence, a pilot can lock up a target on their radar farther than the AIM-9X's seeker can see, and let the missile fly. It will be guided via data-link towards the enemy until AIM-9X's seeker head acquires the target itself and makes its terminal attack run. This gives F-22 pilots, who are highly limited by the missiles they carry internally, the ability to engage at near or beyond visual range distances with all of their eight missiles, instead of just their six AIM-120 AMRAAMs.

Although these advances are welcomed, it is easy to find it relatively absurd that the most advanced air-to-air fighter ever built still won't have the same high-off boresight missile capability as a 40 year old F-15 even after receiving continuos upgrades since it was declared operational some 12 years ago.

The Joint Helmet Mounted Cueing System (JHMCS) used by American F-15, F-16, F/A-18s and a few other US combat aircraft is not an option for the Raptor because its magnetic tracking concept is incompatible with the stealthy cockpit features of the F-22. Still, other HMDs exist, some with arguably better features and adaptability than JHMCS. As of 2015, the USAF was supposed to be working towards fielding a version of the highly capable Thales Scorpion HMD for Raptor pilots. Although the system was given an abbreviated test with Raptors assigned to Nellis AFB in 2014, and the pilots really liked it, official testing was supposed to begin this year with entry into service scheduled for around 2020. Yet not much has been heard about this plan in the last two years, and there has been other talk that a new helmet may be tested instead sometime in the future.

On numerous occasions, F-22 pilots have said they do not want a version of the F-35's helmet. It brings some very unique capabilities to the F-35, which was literally designed around it, but supposedly it has been deemed too heavy and has a forward center of gravity that will make straining under high Gs less than optimal for hard maneuvering Raptor pilots. The Scorpion HMD visor fits to the Raptor's pilot's existing helmet, and uses a "monocle" in front of one eye to display high-definition color imagery. Not just that but a version of it is already deployed on the A-10 and some F-16s, and it is easily adaptable to night vision goggles.

It's frustrating to think that a solution to the F-22's HMD woes exists, and it's an off-the-shelf one at that, but the USAF will not move forward with procuring it for the Raptor community. After spending roughly $70 billion on the F-22 program, you would think that giving it a basic capability that was shortsightedly slashed in the 1990s as a desperate cost saving measure would be an absurdly logical move. Especially considering the total force relies so heavily on the small fleet of Raptors for air supremacy today.

In the end the already outstanding F-22 will never be all that it can be without this glaringly obvious and overdue upgrade. Until then, the world's most deadly air-to-air fighter will still have one wing tied behind its back, and it does so at the direction of the USAF brass and its army of bean counters.