Yet Another Version of the U.S. Army's New Spy Plane Appears in Arizona 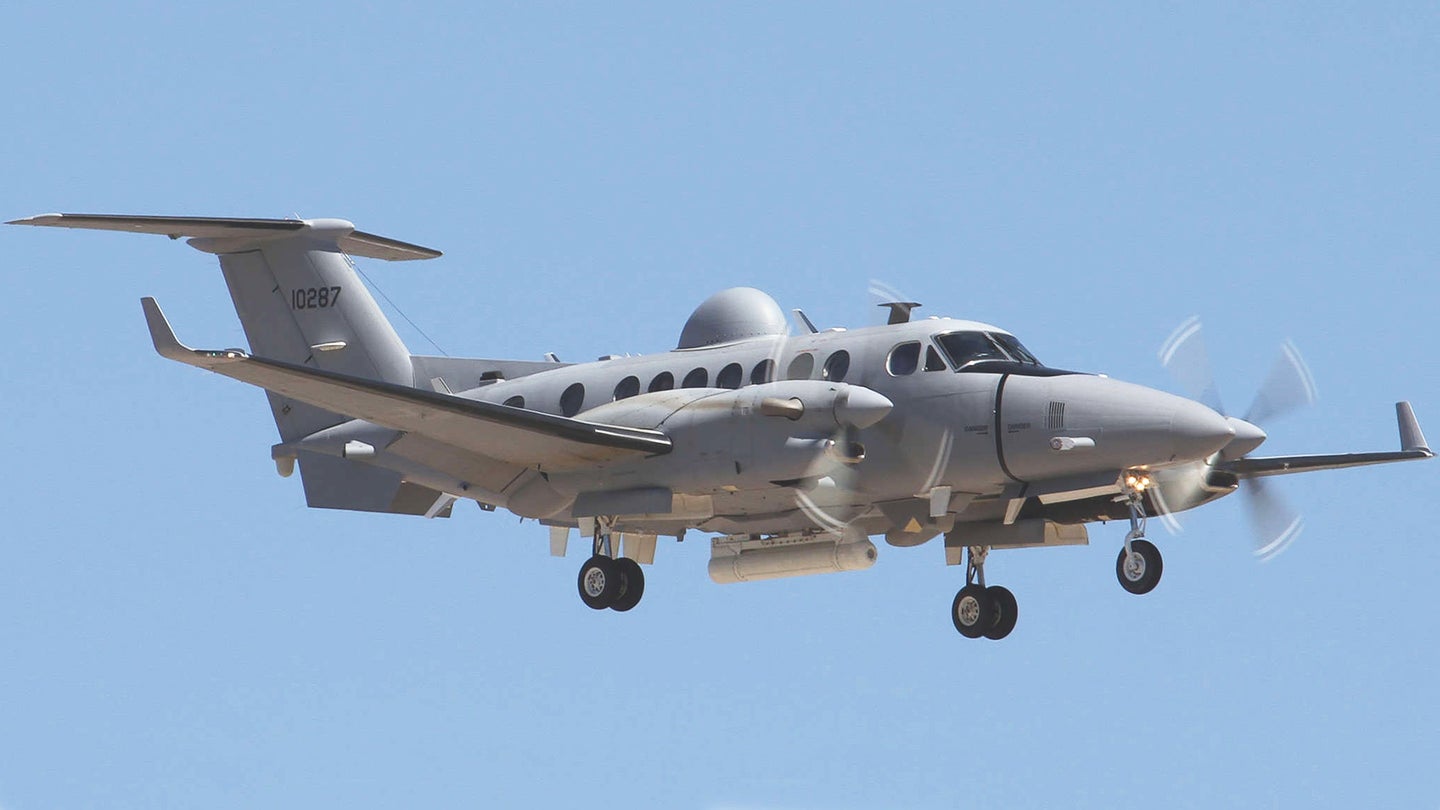 Another version of the the U.S. Army's newest spy plane has made a public appearance in Arizona—this one toting a highly sensitive radar pod. The Enhanced Medium Altitude Reconnaissance and Surveillance System (EMARSS) program consists of four slightly different variants in total. All of the configurations use a twin-engine Beachcraft King Air 350-series platform, known as the MC-12S. The Army almost canceled the project entirely due to budget cuts in 2012, but is now wrapping up a series of tests to get the planes ready for real-life missions.

On March 21, 2017, photographer Bill Word spotted one of the EMARSS-V types flying into Tucson International Airport. This version's distinctive pod, with Northrop’s AN/ZPY-5 Vehicle and Dismount Exploitation Radar (VADER) sensor inside, is clearly visible underneath the fuselage.

The Army is putting the VADER version, along with two other subvariants, through a follow-on operational test and evaluation at Fort Huachuca, which sits less than 100 miles southeast of Tucson, U.S. Army Lieutenant Colonel Sean Smith told The War Zone in an email. The service wants these experiments done and the aircraft ready for fielding by the end of March 2017. A fourth EMARSS type is already flying missions in Latin American and Africa.

Though the MC-12S is one of the latest platforms to carry it, the VADER sensor itself is not new. Sometime during the 2009 fiscal year, the Defense Advanced Research Projects Agency (DARPA) teamed up with what was then known as the Joint Improvised Explosive Device Defeat Organization (JIEDDO) to develop a radar powerful enough track both vehicles and individuals.

The resulting system combined a ground moving target indicator (GMTI) with synthetic aperture radar imaging (SAR) from a fast-scanning active electronically-scanned array (AESA). The SAR can build conventional images even through cloud cover, smoke and dust. A satellite-enabled tactical data-link let operators share the information quickly with command centers and troops on the ground with the appropriate receivers.

The Air Force led the project and ultimately hired Northrop Grumman to build the pod and associated gear. By the end of 2009, a modified de Havilland Canada DHC-6 Twin Otter—with the radar prominently fitted under the nose—had flown nearly 130 test flights, according to JIEDDO. As of 2011, the contractor-operated aircraft was zipping around Afghanistan.

Though engineers intended any aircraft with VADER to employ the system in combination with other sensors, such as full-motion video cameras, it had significant advantages over existing equipment by itself. The 400-pound pod could identify multiple targets across a wide field of view. By comparison, many turreted cameras on reconnaissance aircraft and drones have what is often called a narrow “soda straw” perspective.

“Although the exact size of VADER’s field of view is classified information, it is much larger than that of the…EO/IR [electro-optical/infrared] camera,” the RAND Corporation confirmed in a 2015 report about VADER’s potential for monitoring America's borders. Aircraft “equipped with VADER can acquire many more contacts than they would with the EO/IR system alone.”

An MC-12S with only VADER would not be a perfect tool. The radar can only generate static images, although a sequence of pictures could show significant changes in the target area. Unsurprisingly, it would also not be able to pick up anything without a radar signature.

The setup “alone cannot positively identify detections, it can do so in combination with other sensors,” RAND’s analysts noted. They suggested aircraft with the sensors would use them to spot potential points of interest, which crews would then focus on with cameras or other equipment.

The biggest benefit of VADER was its ability to produce series of images to establish a so-called “pattern of life.” Commanders in Afghanistan reportedly employed the sensor-equipped Twin Otter to watch insurgents emplace roadside bombs, learning their habits and techniques, according to one 2010 Army manual. American forces had previously conducted this type surveillance with aircraft carrying wide-angle cameras, such as the aptly named Highlighter system.

The Army’s complete EMARSS-V configuration clearly takes some of these factors into account. In addition to the VADER pod, to make the aircraft more versatile, each one will have a day and night-capable full-motion camera, as well as a signals intelligence (SIGINT) suite. In Word’s photo, there is no camera turret visible, but it may be retracted into what appears to be a recess behind the radar pod. Other similar aircraft, such as the Airborne Reconnaissance Low-Multisensor (ARL-M), have a similar arrangement.

The cluster of antennas under the rear fuselage is undoubtedly part of the SIGINT system. Inside, each of VADER-toting MC-12S will have work stations with a standard, common computer architecture the Army has nicknamed Big Iron, along with datalinks to send any information quickly back to headquarters or troops on the ground.

In addition, the Army only expects the EMARSS-V to be one tool in its larger aerial reconnaissance fleet. By 2020, the service wants 24 EMARSS aircraft in total, including the four VADERs, along with 20 more planes with other combinations of sensors.

The Army hopes this combination of GRCS, EMARSS, and ARL-E will satisfy its need for airborne intelligence for the foreseeable future.  Of course, with initiatives like Big Iron giving easy access for improvements, we might see the service rapidly add new sensors and technologies as they become available.