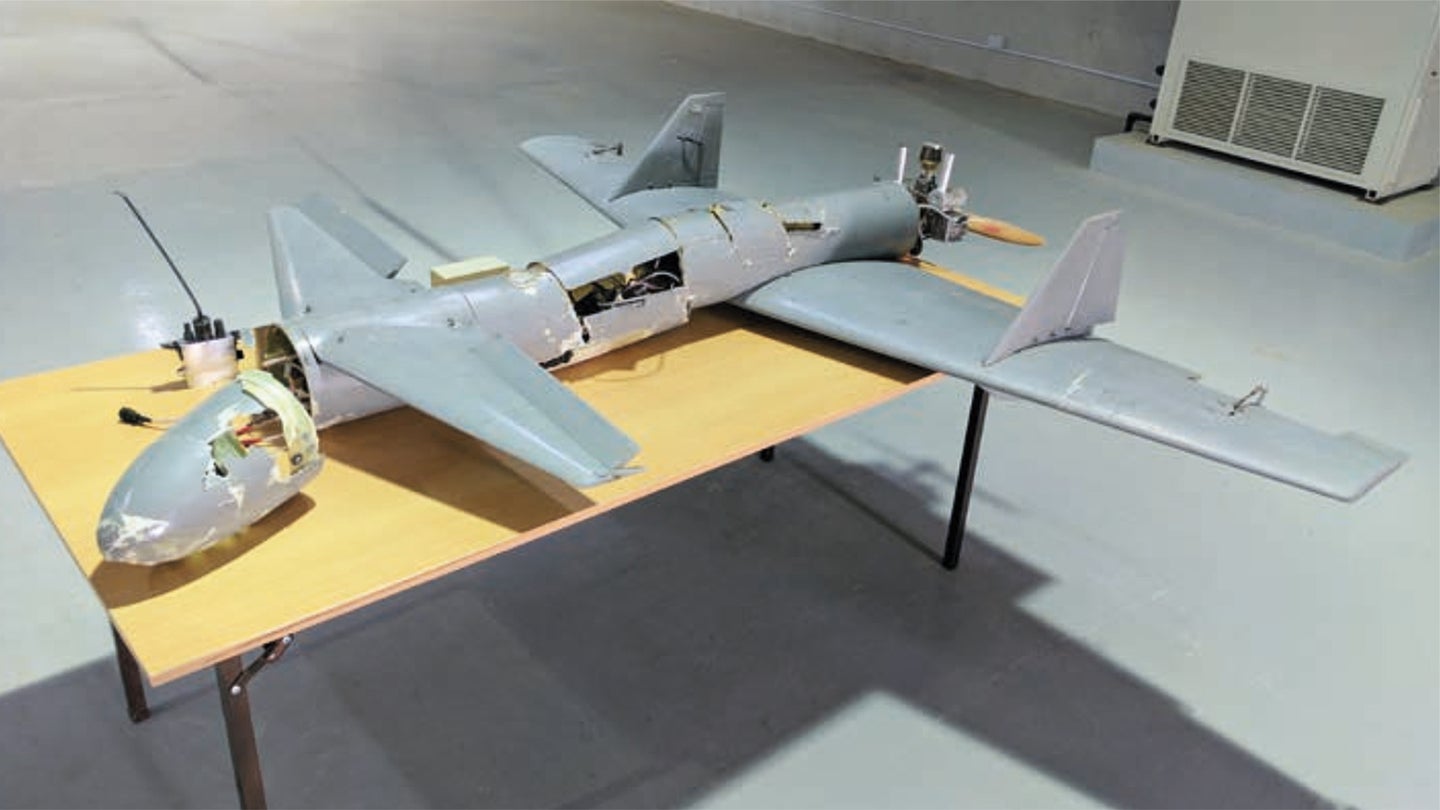 Iran has been smuggling suicidal drones, similar to models developed by Israel, to Houthi rebels in Yemen. The drones are outfitted for attacks on UAE and Saudi Patriot missile batteries. The news comes via examination of seven Qasef-1 drones that were interdicted or captured in Yemen. Iran runs a fairly elaborate smuggling operation that furnishes weapons and other material to Houthi rebels in western Yemen.

According to a report by Conflict Armament Research, six of the drones were captured last October along a known smuggling route that runs through Oman. Another was recovered following a February attack by Houthi rebels on government forces in central Yemen.

The design shown is very similar in configuration to Iran's Ababil series of drones, and the serial numbers found on the drones' internal components are also evidence of its Persian origin. These drones can be outfitted with a rudimentary optical payload for surveillance or they can be configured to go after enemy air defenses in a similar manner as Israel's Harpy drone system. This can include adding a radio frequency homing seeker or even just a GPS autopilot that can fly the drone to a known radar emitter location. When it arrives at that location, the explosives packed inside would detonate. According to the report, all the drones that were seized or recovered appear to be configured for attacks on air defense systems.

The use of robotic weapons by Houthi rebels is not new. A successful attack on a Saudi frigate was performed by a remote controlled boat—which also had Iranian origins. In fact, Iran has developed drones specifically for such a purpose.

What's most interesting about this development is that these weapons are strategic in purpose, bringing a very low-end suppression of enemy air defenses capability to the Houthi rebels' arsenal. Obviously the Houthi have no airplanes, so why would Iran smuggle these types of weapons to them? The answer is clear—because Houthi rebels do have ballistic missiles and rockets, some of which are capable of reaching as far as Riyadh. Iran is also believed to be supplying missile components and expertise to Houthi rebels.

Saudi and UAE MIM-104 Patriot surface-to-air missile batteries are designed to swat the same types of ballistic missiles Houthi rebels are firing out of sky, and they have done so successfully in the past. Saudi Patriot batteries have been especially active near the Saudi-Yemeni border since the conflict erupted two years ago.

Fielding Qasef-1 drones to the Houthis is a classic asymmetric play by Tehran that aims to take the fight, even if just to a small degree, to Saudi and UAE Patriot units, while also attempting to open up windows for their ballistic missile barrages. Whether deploying these drones against the Patriot system has actually worked or not is unknown—we don't even know how many of these things have made it into Houthi rebels hands or have been used—but even a drone that costs a few thousand dollars sucking up multi-million dollar Patriot missiles could be considered a relative win. On the other hand, striking a Patriot's expensive phased array radar with one would be a major victory. In fact, just creating any sort of threat at all to these high-end SAM systems may be considered as a worthwhile endeavor by Tehran.

Last week, many tech websites ran with a story about how crazy and ironic it is that an American ally used a multi-million dollar Patriot missile to take down a small drone. That commentary was naive on multiple levels—just ask Israel who has fired hundreds of $50,000 Tamir interceptors at $200 rockets launched by Hamas, has used Python air-to-air missiles to shoot down Hezbollah and Hamas drones, and was likely the same nation that used the Patriot to down the small drone talked about in the story. In fact, Israel has used the Patriot system against small drones many times before with inconsistent results. Regardless, the story came from General David Perkins talk at this year's AUSA symposium. During his speech he stated:

"That quadcopter that cost 200 bucks from Amazon.com did not stand a chance against a Patriot...Now, that worked, they got it, OK, and we love Patriot missiles... I'm not sure that's a good economic exchange ratio...In fact, if I'm the enemy, I'm thinking, 'Hey, I'm just gonna get on eBay and buy as many of these $300 quadcopters as I can and expend all the Patriot missiles out there'."

You can see this part of his presentation here at the 14:50 minute mark:

Shooting down a few hundred dollar drone with a multi-million dollar Patriot missile may seem like a lousy disparity in exchange cost— and it is— but without a better solution readily available, using surface-to-air missiles against small drones is not illogical. Especially considering even the cheapest remote controlled drones are actively being weaponized by terrorist groups such as ISIS. On top of that, if anyone knows that small drones can be made deadly, and can even seek and destroy hugely expensive air defense radars, it's Israel. They pioneered the idea, and others have since followed, including Iran. Saudi Arabia and the UAE are fully aware of all this, so it is understandable why they too would attempt to protect their airspace, or that of their Yemen allies, even from a diminutive drone like the Qasef-1.

For now these Iranian drones may only threaten surface-to-air missile systems and other radar arrays, but that doesn't mean that Iran won't start sending ones with optical payloads next, or that Qasef-1's GPS can't be programmed to hit other fixed targets. When an optical payload is paired with onboard explosives, such a capability can be used against targets of opportunity, including boats, vehicles and exposed personnel.

Just like the anti-ship missiles and anti-ship drones Houthi rebels have used in recent months, the idea that a non-state actor has their hands on this type of weaponry is quite troublesome, and it could go from being used against combatants in a brutal civil war to being used as a weapon of terror in a blink of the eye. If anything else, the arrival of the Qaser-1 drone in Yemen is another reminder of how small unmanned aircraft are changing the nature of warfare, and are slowly beginning to degrade the effectiveness of much higher-end and more expensive capabilities.