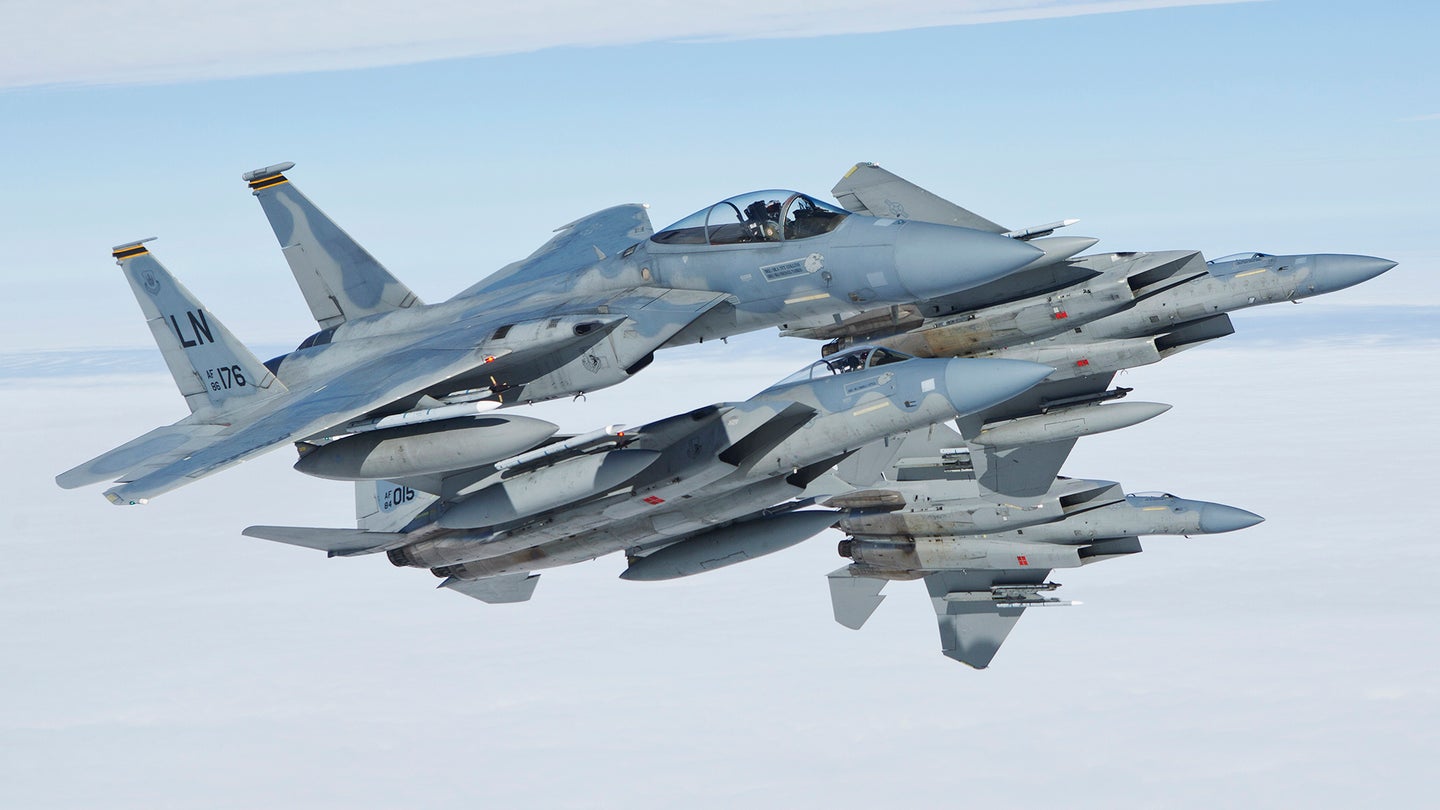 This startling news came during a House Armed Services Committee hearing on the current state of the U.S. Air Force. Chairman Joe Wilson asked right out of the gate about a previously unknown USAF plan to retire the F-15C/D Eagle fleet and replace them with F-16s.

The subject of the question itself seemed to be big news to the committee with Congresswoman Vicky Hartzler later asking about what upgrades the F-15C/D was going to get so it could meet modern threats. Obviously the answer is not many if the Air Force is going to retire the jets in the relatively near term.

Eventually the floor passed to Representative Martha McSally, an A-10 pilot herself and one of the most outspoken critics of the USAF's failed and misleading plan to retire the A-10. McSally is by far one of the most credible voices when it comes to air combat on The Hill. She was shocked by the news and demanded further information about the plan.

Watch the Chairman's initial question at the 34 minute mark, Harzler's follow up at the 55:20 minute mark, and most importantly, McSally's exchange with the generals at the 1:06:30 mark:

The summary of these exchanges is that the USAF is seriously considering axing the F-15C/D fleet entirely, if it’s not outright planning to do so already. The plan does not include the F-15E Strike Eagle.

This is totally new as the "Golden Eagle" force of roughly 179 F-15C/D, as well as training aircraft, is slated to serve for decades to come and is in the process of receiving a series on extensive upgrades to see that it can do so credibly. Many of the jets have already received multi-million dollar APG-63V3 active electronically scanned array (AESA) radar sets, vastly increasing their capabilities. Currently, this is the most powerful and capable fighter-borne air-to-air radar in the world.

In the F-15C/D's place, the USAF wants to put upgraded F-16C/Ds sporting their own, smaller AESA radars. The generals at the hearing stated that the plan is a tough choice that would lead to fewer types of aircraft to support overall, thus freeing up funds for other priorities. The service could make the final decision as early as this year for the 2018 fiscal year budget, or more likely it could inserted the plans into the next budget cycle.

When grilled by McSally about where the USAF is exactly in this so far secret decision making process, the panel replied that the matter is still "pre-decisional." It sure sounded otherwise.

This news impacts a whole slew of critical issues and is clearly reminiscent of the A-10 retirement saga of the last half decade. It is true that many of America's F-16s are in need of a major avionics, structural and radar upgrades. The USAF has deferred these to help fund the F-35 program. You can read all about this issue here.

The question of whether or not to upgrade the USAF's F-16s never had anything to do sacrificing the F-15C/D community in the process. The vast majority of the Eagles are tasked with both overseas contingency operations and for protecting America's airspace at five operating locations that ring the US coastline.

In addition, the move would throw out much of the work that already been done or is underway on upgrading the F-15C/Ds, as well as efforts building tactics and unique capabilities that will allow the Eagle to become a force multiplier for F-22s and even F-35s.

There is also the question of the dwindling size of the USAF's tactical fighter fleet, which has dropped down to just 55 squadrons—a shadow of its pre-Operation Iraqi Freedom self. The force is already incredibly strained and the USAF F-15C/D community has been essential in providing a deterrent force along Russia's border with Europe under Operation Atlantic Resolve.

Finally, with only 187 F-22 Raptors ever built, and just roughly 125 combat coded at any given time, the retirement of the F-15C/D will mean America's air superiority-focused fighter force will become more or less a niche capability. Although some have hoped that the F-22 could go back into production, and supposedly the USAF was undergoing a study of the feasibility of doing just that, it is highly doubtful this would actually happen. This is not so much due to the logistical or financial hurdles involved, but because it would threaten the F-35 Joint Strike Fighter program. In the end, all USAF fighter dollars seem to get pulled into the stealthy fighter’s budgetary black hole.

We'll save the analysis for later, but clearly today's news will send ripples through the USAF, especially among units flying the F-15C/D today. In all, the Oregon Air National Guard stands to lose the most if such a plan were enacted, as they not only have the 142nd Fighter Wing, which flies the F-15C/D out of Portland International Airport, but America's only F-15C/D schoolhouse, situated in Klamath Falls, Oregon. There the 173rd Fighter Wing’s primary mission is to train new Eagle Drivers. The retirement of the F-15C/D would likely see the end of the base's pilot training mission. Kadena Air Base in Japan also has two F-15C/D squadrons, but both would likely be re-equipped with new aircraft in the process.

We'll be back soon with further insight and analysis, as well as reactions from key players in Washington regarding this news.