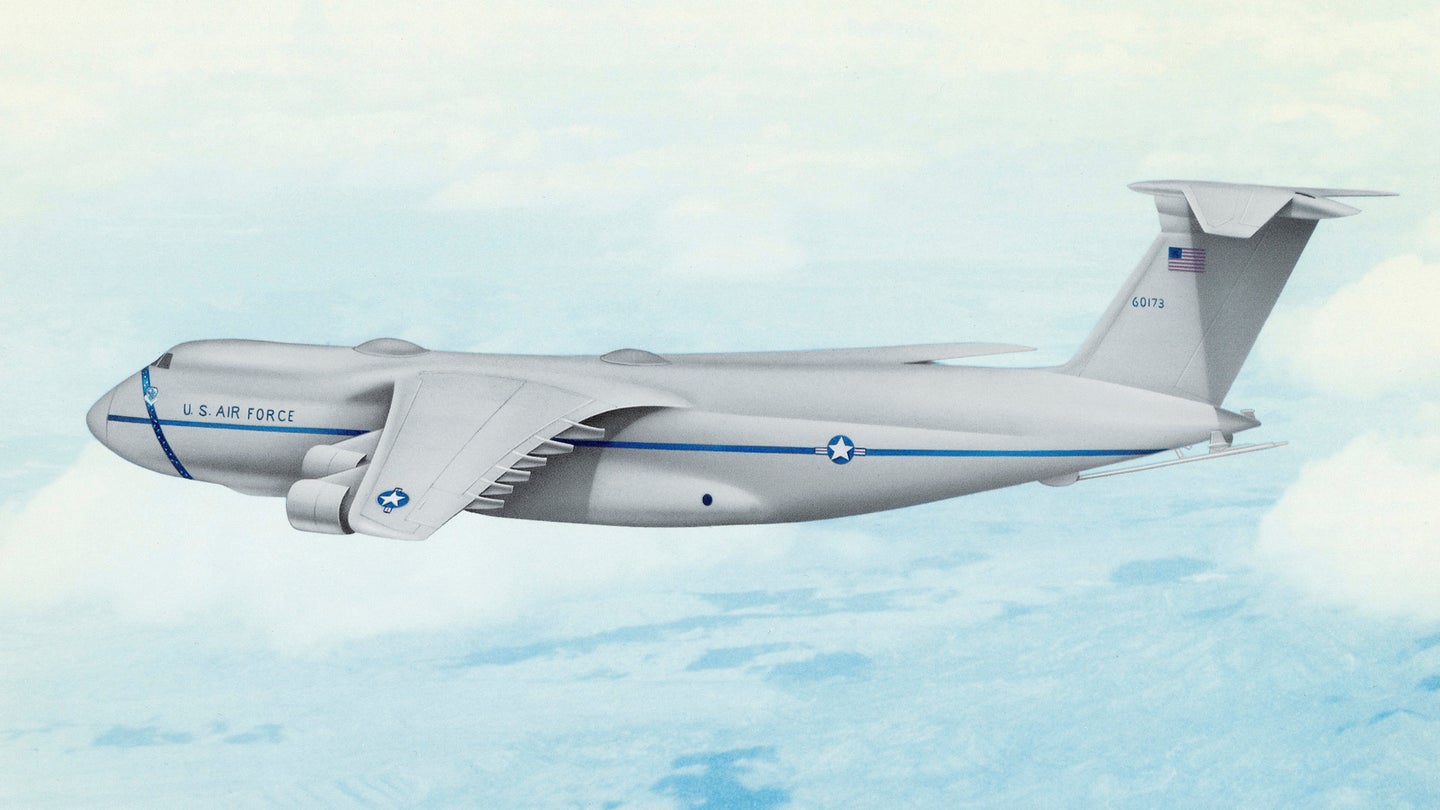 Since its introduction in 1970, Lockheed’s C-5 Galaxy has been the U.S. Air Force’s largest cargo plane. In the late 1980s, the famous plane maker suggested its massive airlifter could take on a new role: airborne command post.

On March 2, 2017, Lockheed posted artwork of this proposed model, unofficially known as the EC-5B. The firm intended it to be a replacement for the earlier EC-135C Looking Glass flying command centers, which would issue orders to the Air Force’s nuclear forces in a doomsday scenario where a major attack destroyed similar facilities on the ground.

“Promotional literature noted the EC-5B is capable of accommodating all current and future [command, control, and communications] mission electronics, battle staff, support personnel, consumables, rolling stock, maintenance equipment, and spares,'” according to the caption Lockheed provided for the art, which is dated circa 1990.

This configuration would replicate and improve upon the basic capabilities of the existing Looking Glass aircraft, which had first entered service in 1963. The EC-135Cs were just one of many variants of the prolific C-135 series, including the KC-135 tanker, all of which were relatives of the iconic Boeing 707 airliner.

Lockheed would have been keen to try and snatch the contract away from one of its biggest competitors. By using the existing C-5B, which was still in production at the time, the company clearly hoped to offer benefits no Boeing product could match.

For one, the EC-5B doomsday plane concept featured a rear-mounted aerial refueling boom. But along with its long-range communications gear, all the EC-135Cs had this equipment in order to perform this function on a limited basis in an emergency. This could have been critical to keeping the planes on airborne alert if a sneak attack blasted other supporting aircraft or if the demands of any counter-attack required additional tankers.

However, unlike the smaller Boeing aircraft, Lockheed’s proposal envisioned a plane that could perform its function in the sky or on the ground. In its transport configuration, the KC-135 can carry up to 83,000 pounds of cargo. The standard C-5B could accommodate more than three times that payload.

As a result, the previously cargo-carrying EC-5B would have space for “life support provisions for autonomous operations over a protracted period from small, austere dispersal airfields,” the art’s caption noted. In short, crews could decide to land the aircraft at safer, remote locations and continue operations without immediate outside support. This is where the C-5's huge size may have been advantageous as it could theoretically sit on the ground at an austere location, even operating in a pressurized state for long periods of time during a nuclear crisis or exchange. The jet's ability to get back into the air again is a whole other issue considering the C-5's notoriously low mission capable rate.

Ultimately, the Air Force decided not to buy Lockheed’s super-sized flying command post. On July 24, 1990, the service stopped its continuous Looking Glass missions, instead keeping the EC-135C fleet on the ground on 24 hour alert.

Then, in 1998, the Pentagon decided the U.S. Navy’s E-6B Mercury, another Boeing 707 derivative, would take over the mission as part of the expanding role of the centralized U.S. Strategic Command (STRATCOM). Previously, these naval airborne command centers had only been responsible for maintaining contact with ballistic missile submarines if an attack knocked out other communications systems, a mission known as Take Charge and Move Out (TACAMO).

The Pentagon is aware that their collection of 707-derivatives will finally be nearing the end of their lifetimes in the coming decades. The Navy accepted the first E-6A in 1989 and then began transforming the entire fleet into the improved B models eight years later. The E-6s are among the last 707 derivatives Boeing ever built. Among various communication equipment and other systems, these aircraft now carry the airborne launch control system, which can issue fire commands to troops in missile silos down below.

The last set of major E-6 upgrades, which Boeing completed in 2003, is supposed to keep the Mercuries operational through 2038. The Air Force is hoping to replace its E-3 Airborne Warning and Control System (AWACS) and E-8 Joint Surveillance Target Attack Radar System (JSTARS) radar planes, as well as the OC-135B Open Skies surveillance aircraft well before 2040. By 2018, new Boeing KC-46A tankers should be starting to take over for the older KC-135s.

The E-6Bs have received other minor updates since 2003, too. In 2014, one touched down at Patrick Air Force base sporting an additional dome, possibly housing a new communications antenna. On Feb. 7, 2017, another left Edwards Air Force Base in California after testing a set of three new antenna radomes, a modification that will likely become standard across the fleet.

Still, it takes time to develop and test new aircraft in general. This is especially true for specialized planes intended for critical missions such as the E-6.

“We’re only 20 years from 2038, but if you’re going to build large aircraft with huge command and control you need to start thinking about those things right now,” Air Force General John Hyten, head of STRATCOM, told reporters on March 8, 2017. “That’s what the Navy is starting to do. I’ve requested that they start looking at defining what comes next.”

Hyten also suggested it would be smart for the Air Force to team up with the Navy to figure out what an upgrade or replacement for the E-6Bs might look like in the end. “The requirements on the Air Force side – the size and shape of the airplane, the capacity, the endurance – are very similar missions,” the general said.

Both services will undoubtedly want a plane with state-of-the-art communications and defensive gear, shielded against everything from nuclear explosions to cyber-attacks. Ever more fuel-efficient engines to help keep flying costs down and endurance up will also be a must have for any Mercury replacement.

Though Lockheed could partner with another firm to offer a proposed replacement, the company does not currently make a readily suitable aircraft for this mission itself. With the Galaxy long out of production, and seeing as those that are still flying, even in the modernized C-5M form, are expensive machines to operate, it is all but certain we will never see the EC-5 airborne command post concept become a reality.