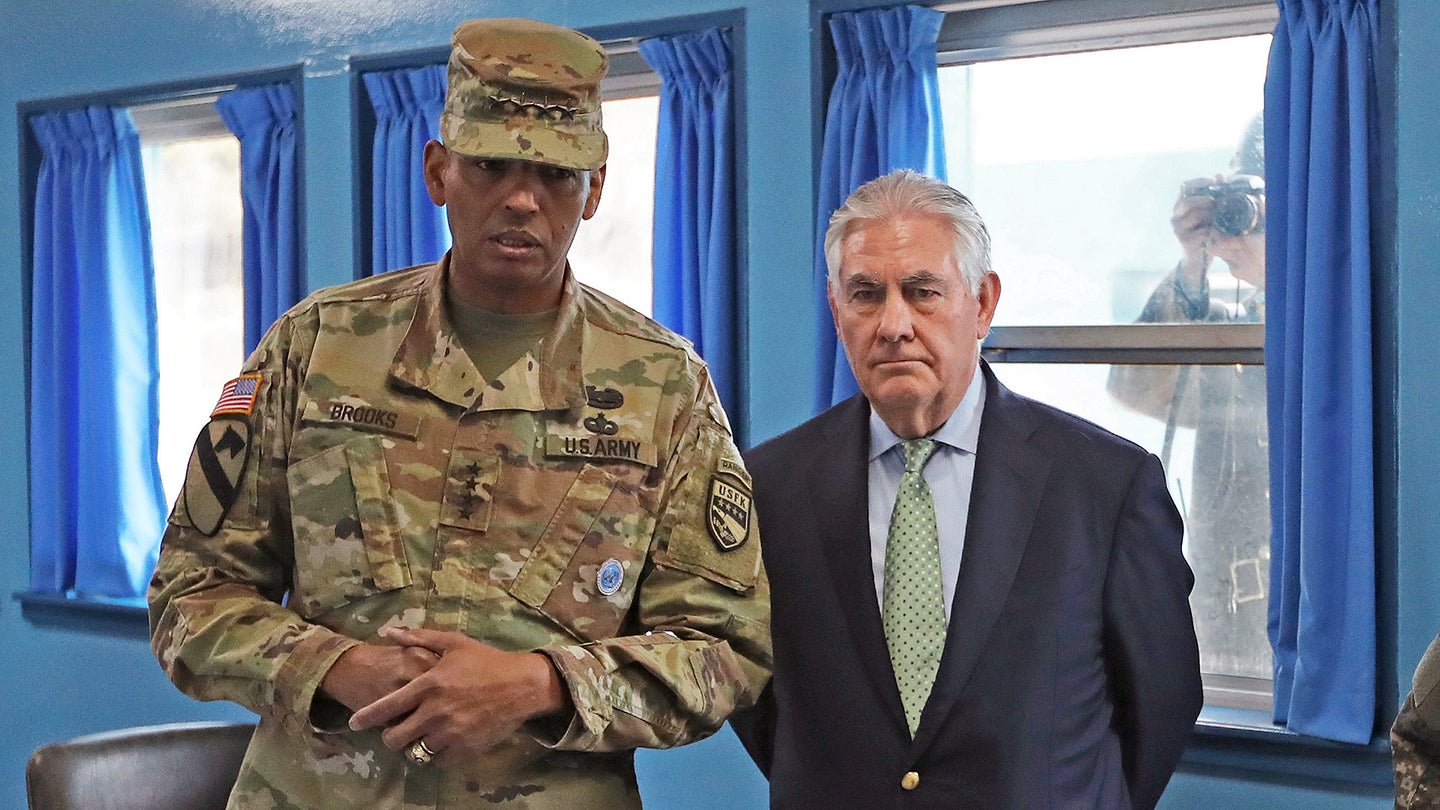 President Donald Trump and his administration have been talking tough on North Korea—but so far, the actual policies have been business as usual, and the escalating rhetoric may only serve to validate the reclusive regime’s paranoia.

On March 17, 2017, Secretary of State Rex Tillerson met with his South Korean counterpart, Yun Byung-se, as part of his first state visit to the country and a larger tour of American partners in Asia. At a joint press conference, he offered the latest tough talk at his host’s northern neighbor.

“Let me be very clear: the policy of strategic patience has ended,” America’s top diplomat declared. “If they [North Korea] elevate the threat of their weapons program to a level that we believe requires action, that option is on the table.”

The statement was part of a clear trend. On March 4, 2017, The New York Times reported that Trump himself had received a briefing on “all options” for neutralizing North Korea’s missile and nuclear programs. At least one South Korean news outlet interpreted this as a possible discussion of reintroducing American nuclear weapons onto the Peninsula. Washington removed its stockpile of tactical nukes from the country in 1991.

Later in the month, the Pentagon has made two notable permanent deployments to the Korean Peninsula. U.S. officials did little to dissuade the public from the idea that the arrival of Terminal High Altitude Air Defense (THAAD) missiles and MQ-1C Gray Eagle Drones were both linked to North Korea’s ballistic missile and nuclear tests.

“Any attack on the United States or on our allies will be defeated and any use of nuclear weapons would be met with the response that would be effective and overwhelming,” Secretary of Defense James Mattis had said at a press conference in Seoul on Feb. 3, 2017. “Due to North Korea's threatening rhetoric and destabilizing behavior, we are taking defensive steps, like deploying the highly effective THAAD antimissile unit to the Republic of Korea, to protect its people and our troops that stand beside our ally.”

However, on closer inspection, Washington’s actual military moves have been business as usual. Beyond the stronger language, there is little as of yet to distinguish the actual policies from that of President Barack Obama.

They do, unfortunately, fit perfectly in line with North Korea’s state-run media, including the Korean Central News Agency, which routinely warns that a threat to the regime is imminent. It is hardly uncommon to read official screeds declaring the United States and its southern “puppets” are one step away from a massive, unprovoked invasion on their path to colonize all of East Asia.

In 2009, the Pentagon ended a previous policy of rotating Patriot surface-to-air missile batteries through deployments to South Korea and instead permanently based two battalions of the weapons on the Peninsula. Afterwards, Washington and Seoul began actively discussion sending THAAD to the region.

In light of delays and developmental hiccups with THAAD, in 2013, South Korea declared it would invest in building its own system. Three years later, with Lockheed’s ballistic missile defense system showing improvement, the Pentagon announced it had finally reached an agreement with South Korean officials on the deployment of a single battery of the missiles—the same battery that started arriving in March 2017.

As this debate had long been controversial and public, North Korea was well aware that the plan to deploy THAAD to South Korea was underway. “The projected deployment of THAAD in South Korea brings to light the adventurous scenario of the U.S. bellicose forces to invade the DPRK [Democratic People’s Republic of Korea], threaten its neighboring countries and dominate the Asia-Pacific region,” North Korea’s state-run newspaper Rodong Sinmun had declared in its typical style on June 17, 2014.

Pyongyang's extensive intelligence networks in the south may have even been aware of the exact timeline for THAAD's arrival. As such, it is very possible that North Korea’s March 2017 missile tests were actually an act of preemptive protest rather than an arbitrary provocation. Yet if you were to read U.S. government officials' quotes on the deployment, it sounded as if the arrival of the first THAAD components on South Korean soil—just hours after North Korea had launched a series of missiles—was a reaction to those launches and some form of a tit-for-tat  military escalation.

Similarly, rather than a reaction to any new developments, the Pentagon’s decision to send Gray Eagle drones to South Korea was part of a long-standing and broad plan to reorganize its aviation units. The Army plans to add at least one company of the unmanned aircraft to each of its combat aviation brigades. The 2nd Combat Aviation Brigade is based in South Korea.

The pilotless planes partially take over the role previously filled by the OH-58D Kiowa Warrior scout helicopter. In February, the very last of those helicopters in the Army returned from a deployment to South Korea. The service ultimately hopes to employ a “manned-unmanned team” of MQ-1Cs and AH-64 Apache gunships on any future battlefield. But once again, many official comments made about the drone's deployment would make you believe it was in reaction to North Korea's actions and part of a new hard line policy by the Trump administration, instead of just a long planned upgrade of hardware.

And as already noted, Foal Eagle and Key Resolve are annual exercises. The training missions invariably cause heightened tensions on the Peninsula and provoke North Korea’s ire. North Korean forces often respond with shows of force such as artillery barrages and missile launches into the sea nearby, ballistic missile tests and even nuclear detonations.

During the 2016 iteration of Ulchi Freedom Guardian—another yearly war game—officials in Pyongyang threatened a nuclear strike on South Korea. The same year, North Korea said it would launch a nuclear-tipped missile at the U.S. Air Force Base on Guam after the Pentagon announced a new deployment of long-range bombers.

The four missiles Pyongyang launched in March 2017 appeared to be practice run for an attack on Japan. This could have been an attempt by the regime to stage a counter to exercises it sees as a direct threat to its existence, and it is not the first time they have launched practice ballistic missile attacks. The focus on preemptive strikes to decapitating the regime and its weapons of mass destruction reflects the current military strategy for an open war with the North, called Operations Plan (OPLAN) 5015, which the Pentagon reportedly implemented sometime in 2015.

Regardless, though the exact details have been classified, experts have long conducted open source analysis of OPLANs relating to scenarios on the Korean Peninsula. These include OPLAN 5027, a response to a North Korean invasion and subject major war, and OPLAN 5029, a plan for handling a complete collapse of the strict dictatorial regime.

Tillerson also mentioned the possibility of harsher sanctions, but this came following a February 2017 report from the U.N. detailing North Korea’s extensive flaunting of international sanctions. The Communist regime had “intensified” these activities and the international community’s efforts to implement new controls had been “insufficient and highly inconsistent,” the panel of independent experts explained.

So, it seems unlikely that the sterner American statements will goad North Korea into changing its own policies unless they’re actually coupled with a new, cohesive strategy. They will undoubtedly inflame the regime's own pronouncements and paranoia about the United States. They could also serve to lighten the hair-trigger that separates a shaky peace from total war on the Korean Peninsula.

Whatever happens, the truth is the U.S. has always put all the options on the table and North Korea knows it.