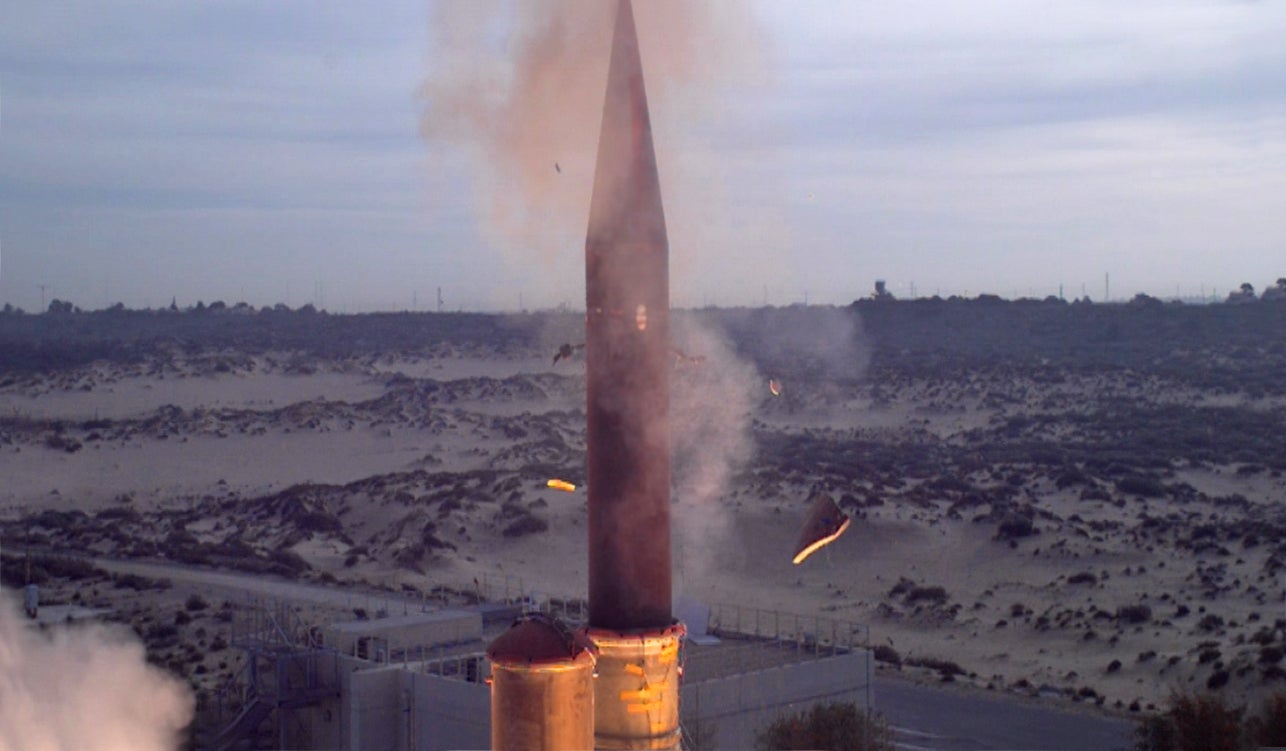 In a first, Israeli's Arrow 3 anti-ballistic missile system intercepted a surface-to-air missile fired at Israeli Air Force (IAF) jets that had struck targets in southern Syria. The action began overnight at around 2:30 am local time when IAF jets supposedly attacked a weapons shipment intended for Hezbollah. Shortly after, the jets were fired upon by Syrian surface-to-air missiles as they were flying back into Israeli airspace. At least one of the missiles was engaged by an Arrow 3 battery located in northeast Israel. Nobody on the ground was injured in the incident, and although Syrian forces claimed they downed an IAF fighter, Israel says the jets made it back to base without issue.

Photos of what appeared to be the hulk of a missile, possibly the booster of an Arrow 3, were posted on social media shortly after the incident:

The missiles were supposedly fired from southern Syria by Assad’s military, and traveled over Jordan towards the Jerusalem area. They were apparently SA-5 (NATO reporting name: Gammon) surface-to-air missiles, which have been in Syrian service for many years. Although dated, these are very large missiles that feature a fairly long-range and high operating altitude. The IDF said the missiles did not pose a threat to Israel or its fighters that were close to or already in Israeli airspace when the Arrow 3 engaged. With all this in mind, it may seem puzzling why the Arrow 3 was used to engage the Syrian SAMs, but there may be one easy explanation.

Arrow 3 is a midcourse ballistic missile interceptor system, and was never meant to counter surface-to-air missiles or even aircraft. It was primarily designed to counter ballistic missiles launched form Iran, but it can also be used to counter those launched from Arab states and even work as an anti-satellite weapon. Arrow, now in its third evolutionary configuration, has been developed over 20 plus years. It occupies the "top tier" of Israel's layered missile defense concept, with David's Sling, (and the Patriot to some degree) and finally Iron Dome fulfilling its lower layers. Arrow 3 just became operation in January and this was the first operational use of an Arrow missile.

It is possible that some of the SA-5s, or whatever missiles were launched by Syrian forces, were fired in "ballistic" mode as a defensive measure. During a ballistic launch, SAMs are fired unguided toward a suspected threat to put that threat on the defensive, or as an act of desperation because the target can't be successfully acquired by the system's fire control radar. The missiles either self destruct once reaching a high altitude or continue on their ballistic trajectory once their rocket motors burn out. It is possible that Israel's integrated air defense system, and the Green Pine radar system that provides tracking and targeting for Arrow 3 in particular, picked up the ballistic track of the telephone pole sized SA-5 and categorized the threat as a short-range ballistic missile and engaged it as such.

This may be the first time a surface-to-air missile was shot down by another ground-based air defense system.

The launch of the Arrow missile activated Israel's rocket alert system along the country's eastern border, with sirens going off as far as the West Bank, and explosions were heard after the sirens had sounded.

The news of yet another Israeli airstrike in Syria and retaliation SAM launches by Syrian forces comes after some experts posited that Israel is already using their two F-35Is in an offensive role over Syria, even though the jets were just delivered a few months ago. It has also been claimed that S-300 SAM systems—which only the Russians possess in Syria—had been engaging the F-35Is and other IAF aircraft in recent months.

Both claims are very unlikely to be true. But what is true is that IAF aircraft have been fired on before while operating over Syria and Russia's tacit agreement with Israel for "deconfliction" of airspace over the war-torn country seems to have begun to unravel in recent months. Still, there is zero evidence that Russia has anything to do with attacks on Israeli jets that have carried out airstrikes in Syria on targets related to the transfer of advanced weapons to Hezbollah. Israeli airstrikes seem to have accelerated in recent months following the fall of Aleppo to the Assad regime, Russian special operations forces and Iranian-backed Hezbollah fighters, with strikes occurring on what seems like monthly basis since then.

This incident appears to be the most serious engagement between the re-empowered Assad regime and Israel since the Syrian civil war began almost six years ago to the day. Israel has been able (at least to public knowledge) to penetrate Syrian airspace since Operation Orchard—the 2007 bombing of a suspected Syrian nuclear reactor site near Dier ez-Zor. This has largely been possible due to a cocktail of measures that rely heavily on advanced electronic warfare and cyber attacks on Syria's air defense network.

Since the Syrian civil war began, Assad's air defense system has remained largely intact. It wasn't knocked out as a result of the crossing of President Obama's "red line" when chemical weapons were used by regime elements against Syrian civilians, and an unspoken agreement between the Assad regime and the US-backed coalition has existed whereas Assad's air defense network has been left untouched in exchange for Assad's forces not targeting US and other allied aircraft.

Now that the Assad regime, which was near failing a year and a half ago, has been propped back up into a fairly stable state by its Russian and Iranian backers, it is no surprise that his air defense forces are becoming more bold and protective of their airspace. Still, at this point in time the good news is that none of Russia's advanced "triple digit" S-300 and S-400 SAM systems that are deployed within Syria's borders have engaged Israeli jets. If that were to occur it would represent a very robust and new challenge for the IAF and would signal a massive shift in the already incredibly dicey geopolitical balance of the region.

We will keep this page updated throughout the day as more information on the incident becomes available.