America's Counter-Terrorism Fight in Yemen Is Entering a New Phase 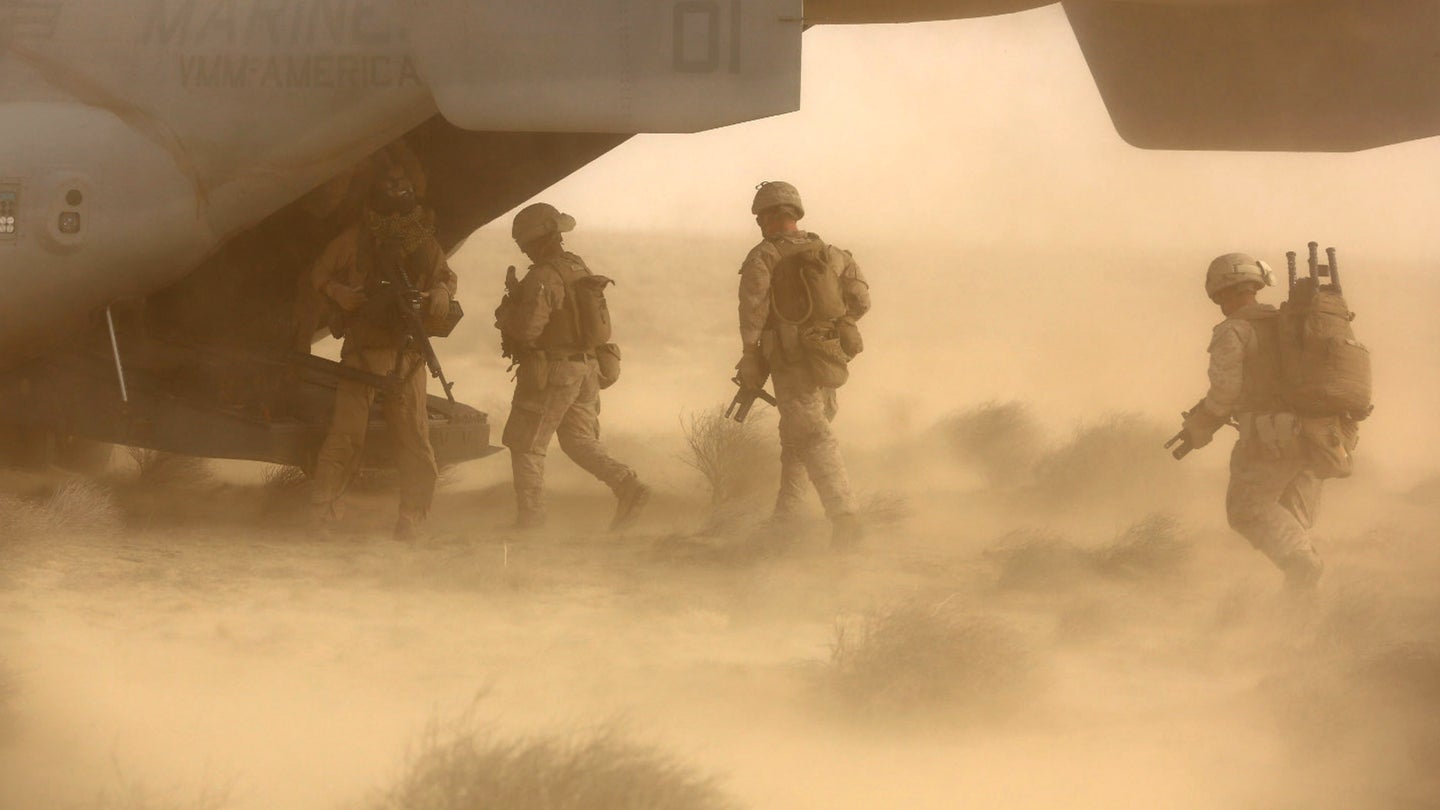 America's counter-terrorism fight in Yemen is entering a new phase. But how much the Trump administration will ultimately change the course of U.S. military operations in the country remain uncertain.

The United States has been actively, but quietly fighting Al Qaeda in the Arabian Peninsula (AQAP) since at least 2009. On Jan. 29, 2017, a deadly and controversial special operations raid in the Al Bayda Governorate suggested President Donald Trump and his administration were moving away from previous campaigns focused almost entirely on manned and unmanned air strikes.

The two known official operational nicknames associated with operations in Yemen – Operations Copper Dune and Yukon Viking – are old and “won’t be used again,” the U.S. Central Command (CENTCOM) public affairs office told The War Zone in an Email. While the Pentagon’s top headquarters for operations in the Middle East declined to provide any new monikers for activities in the country, this further suggested the Trump administration had updated the operational plans.

The exact timeline of events is unclear. The most recent official mention of either operation is a brief note about Yukon Viking operations in one 2015 report. At the time of writing, CENTCOM had not yet responded to follow-up questions about when these previous missions formally ended.

Those dates would be key to understanding how and why the Pentagon changed track in Yemen. During the 2016 election campaign and after his victory, Trump consistently declared his intention to step up America’s fight against terrorists. After details emerged suggesting the January 2017 raid had been a debacle with uncertain results, the president said military officers at an unspecified level had crafted the plan before he entered office.

Pres. Barack Obama reportedly refused the approve the operation, though unnamed sources told the Washington Examiner they disagreed with that assertion. On Twitter, Obama's National Security Advisor Susan Rice said the Pentagon had never shown a plan for that specific mission to the White House during her tenure. Whatever the case, Trump made the final decision to authorize that raid, marking the apparent escalation in America's long-standing mission in and around Yemen, which has been on-going for nearly a decade.

After 9/11, one of the first things officials in Washington did was establish a military presence in Djibouti to respond to terrorist threats in both the Gulf of Aden and the Horn of Africa. When Al Qeada’s franchise in Yemen and Saudi Arabia morphed into the single AQAP entity in 2009, the Pentagon quickly began a secretive campaign of air strikes and missile attacks aimed at the group. Multiple controversies steadily came to define U.S. operations in the country.

On Dec. 17, 2009, as part of Copper Dune, the U.S. Navy launched a flurry of BGM-109D Tomahawk cruise missiles at what the Pentagon believed was a terrorist camp in Yemen’s Abyan province. Each carrying more than 150 submunitions, the weapons slammed into the village of Al Majala, killing more than 40 innocent civilians.

How many, if any, terrorists died in the attack remains unclear. American and Yemeni authorities sought to cover up the debacle according to diplomatic cables former U.S. Army soldier Chelsea Manning subsequently leaked to Wikileaks.

Almost two years later, a drone strike killed AQAP spokesman and recruiter Anwar Awlaki. The 2011 attack provoked a still on-going debate about whether the U.S. government acted legally in killing one of its own citizens aboard. Awlaki’s teenage son Abdulrahman Awlaki died a month later in another aerial strike. The January 2017 raid reportedly resulted in the death of his then eight-year-old daughter Nawar Awlaki.

In 2013, yet another unmanned mission mistook a group of vehicles carrying a wedding party for a terrorist convoy. The incident claimed the lives of another 13 innocents. Still, there were many more strikes that appeared to successfully hit their mark. Between 2002 and 2016, American military forces and intelligence agencies conducted more than 200 aerial attacks, killing hundreds of AQAP terrorists.

And on the ground, the Pentagon was similarly working hard to deliver military aid to Yemen’s military, while U.S. special operations forces were training and fighting side-by-side with their Yemeni counterparts. Between 2006 and 2014, the Defense Security Cooperation Agency coordinated deliveries worth more than $500 million in total, including helicopters, drones, trucks, small arms, night vision goggles, medical supplies and even clothing.

By April 2014, U.S. special operations forces were actually flying Yemeni choppers during operations, because the country’s own pilots had not yet gotten certified to fly at night, according to CNN. On Dec. 5, 2014, both countries partnered on a mission to try and rescue American journalist Luke Somers and South African humanitarian Pierre Korkie from AQAP. Unfortunately, that operation failed and terrorists murdered both men during a protracted firefight.

“This strategy of taking out terrorists who threaten us, while supporting partners on the front lines, is one that we have successfully pursued in Yemen,” Obama explained to reporters in September 2014. “It is consistent with the approach I outlined earlier this year: to use force against anyone who threatens America’s core interests, but to mobilize partners wherever possible to address broader challenges to international order.”

Fearing an Iranian ally was about to take control of Yemen, authorities in Riyadh rushed to put Hadi back in power. A Saudi-led military coalition intervened directly starting in 2015, first launching its own massive aerial campaign and then eventually deploying ground troops. Disinclined to get directly involved in this new conflict, the Obama administration directed the Pentagon to provide aerial refueling, intelligence and logistics support. At the same time, AQAP wasted no time in using chaos to regroup and recruit new followers.

American special operators did not return publicly to Yemen until April 2016, when they arrived and teamed up with forces from the United Arab Emirates (UAE). Adding even more complexity to the entire mission, while the UAE’s troops were part of the Saudi-coalition, they had steadily turned their focus from the Houthis to the AQAP. Emirati troops were reportedly part of the January 2017 raid.

Knowing all of these details, it is possible the collapse of the Hadi government and ensuing civil conflict could have forced the Pentagon to end Copper Dune and Yukon Viking outright for want of reliable partners on the ground by 2015. But from what information is available, Trump does seem more willing than Obama to approve action in Yemen.

Since the president has repeatedly stated a desire to keep such operations secret, we may not yet know just how much the scope of American operations has expanded since the new administration arrived in Washington, either. After Secretary of Defense James Mattis sent a new plan to defeat Islamic State to the White House in February 2017, additional american special operators and regular troops appeared across the Middle East, particularly in Syria, indicating a major increase in the size of military operations across the region. The next month, the Pentagon announced it wanted to send additional forces to Afghanistan, as well.

Of course, after the dramatic raid in Al Bayda, the Pentagon kicked off an expanded air operation with more than 20 strikes on suspected Al Qaeda members on March 2, 2017. Though a significant increase in the size of the mission, this aerial assault would have been keeping with the previous strategy. The new administration may have relaxed the rules of engagement, giving the overall mission room to grow, but also increasing the potential for more collateral damage.

As March 2017, the basic American military posture in the country seemed to involve active counter-terrorism operations against Al Qaeda-linked fighters, as well as continued tertiary support to Saudi-led forces battling anti-government forces. And starting in 2016, American forces had really struggled to avoid getting entangled in the complicated fight against the Houthis, with rebel forces firing missiles and using remote-controlled boats to attack both U.S. and Arab warships in the Red Sea and the Gulf of Aden. In October 2016, American destroyers responded to those provocations with a barrage of cruise missiles.

Though he did defend the value of the January 2017 operation, Votel unsurprisingly did not offer any comments about a shift in policy or go into great detail about the operations at all. But America's fight in Yemen is changing, even if the full extent of the new strategy remains to be seen.