An internal summary of VMFA-121's trip to Nellis Air Force Base in 2016 is much more nuanced than most of the official press releases. 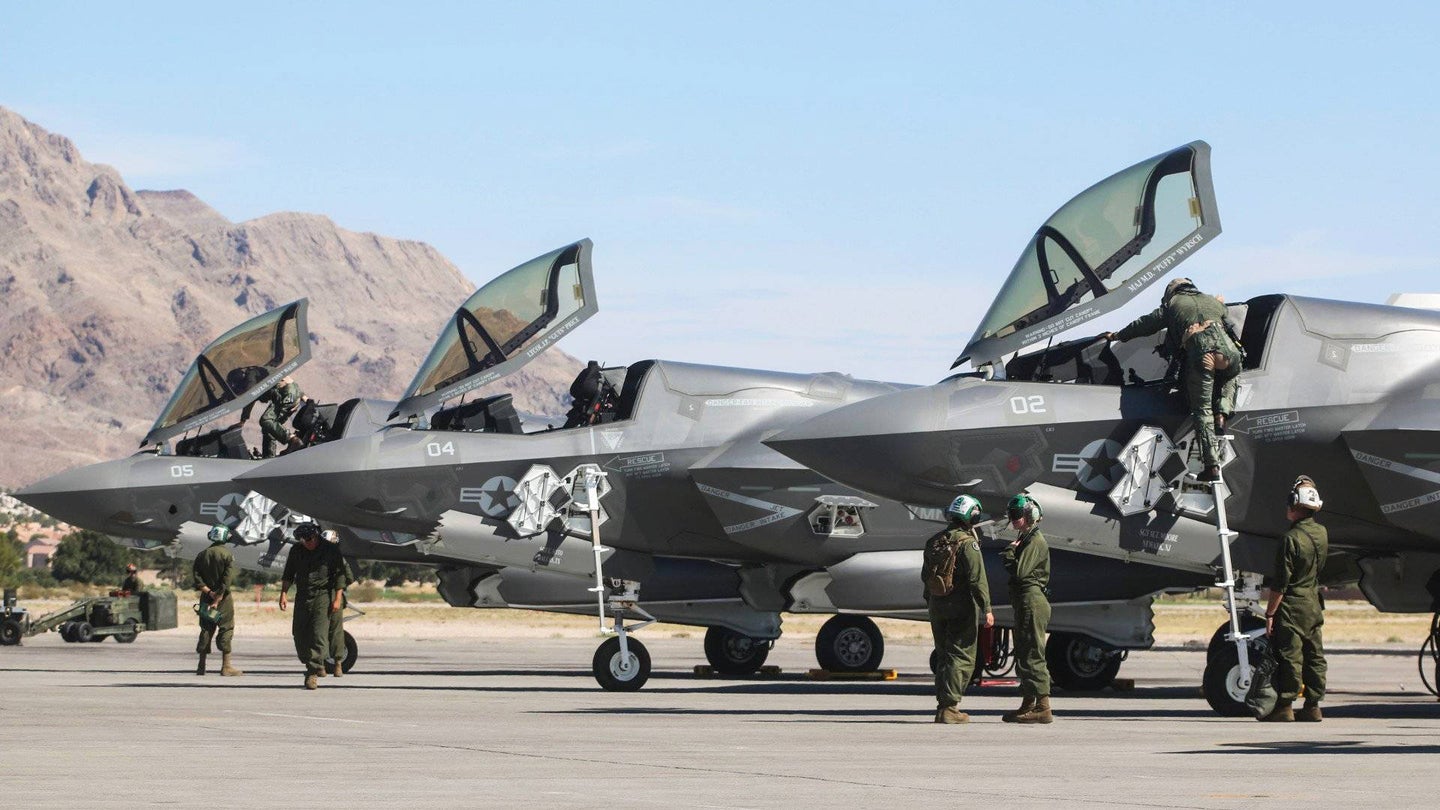 With great fanfare, the U.S. Marine Corps’ Marine Fighter Attack Squadron 121 (VMFA-121) arrived at Nellis Air Force Base with a contingent F-35B stealth fighters in July 2016. This was the first time F-35s of any type had participated in an iteration of the U.S. Air Force’s most important aerial war game, Red Flag.

Thanks to the Freedom of Information Act, The War Zone can now share how Bardo described the experience to his superiors behind closed doors. The executive summary of his final report paints a picture that is—like everything about the F-35—more complicated than the Pentagon’s public affairs push. A reading between the lines would seem to prove Marine F-35Bs were still far from ready for actual combat a year after the service declared the aircraft had achieved initial operational capability (IOC). It's especially enlightening to read after the Air Force's impressive claims about its own F-35As at Red Flag 17-1 in February 2017, where pilots reportedly racked up an impressive kill ratio of 15-to-1, a figure that was later revised to 20-to-1.

Of course, It’s important to note The War Zone has only seen the executive summary and not the full and undoubtedly more detailed after-action review. At the time of writing, the Marine Corps had not yet responded to queries relating to the document. Though we have no reason to suspect the report is in any way disingenuous, we are still relying on Bardo’s own observations about his own unit’s performance.

“Overall, the F-35 was far more survivable then the participating legacy aircraft,” the Marine officer wrote in his concluding paragraph.“ This was the first Red Flag exercise with F-35 participation and the USMC lead from the front.”

In addition to the Marine’s Joint Strike Fighters (JSF), Red Flag 16-3 included Air Force F-22 Raptor and F-16 Viper fighter jets, and Navy EA-18G Growler jammers, along with a host of other supporting aircraft and drones, such as E-3 radar planes, KC-135 tankers and RQ-4 Global Hawks. More F-16s from the Air Force’s 64th Aggressor Squadron and Draken International’s A-4 Skyhawks acted as the opponents. Everyone got a classified briefing about what the F-35 could do and some individuals sat in on a second briefing about the program in general.

According to Bardo’s memorandum, during each week, his unit would spend two days flying air-to-air missions and three days practicing air-to-ground strikes, targeting opponents with the aircraft’s sensors and escorting combat search and rescue assets. In the vast majority of those cases, the squadron sent out a pair of F-35s. Four-ship “surge events” occurred two nights a week, as part of the “defensive counter air” and “strategic attack” sessions.

The F-35’s actual flying time during the exercise appears to have been relatively limited. Over the course of two weeks, VMFA-121’s six F-35s spent a total of just over 94 hours in the air—three hours more than exercise planners had planned for the unit. The squadron expected to conduct 70 sorties in total during the exercise, but missed three in the end.

Weather, specifically a thunderstorm and fears about dangerous ice buildup, forced the Marines to cancel two sorties since the potential danger of lightning strikes has long been a vexing problem for the F-35. In June 2016, storms temporarily halted Air Force F-35As from flying during a separate exercise at Mountain Home Air Force Base in Idaho, according to other records the author obtained via FOIA. Earlier in March 2017, Australia’s two F-35s had to wait an extra day to leave the Avalon Air Show near Melbourne because of similar concerns.

An unspecified maintenance issue forced the Marines to abort the other flight. Without knowing more details, this could be anything from a flat tire to something far more serious. The F-35B has suffered dangerous incidents in the past. In November 2016, Military.com broke news of one of the Corps’ JSFs suffering a major fire in the jet’s internal weapons bay. Investigators ultimately traced the cause of the problem back to a loose bracket holding electrical wiring.

VMFA-121 also left a seventh jet behind at its base in Arizona due to a malfunctioning integrated power package (IPP), which provides electrical power for the aircraft, Bardo noted. In all, fewer than two of the squadron’s fighters— 23 percent—were “full mission capable” at any one time, on average. Crews kept approximately 53 percent of the six planes “partial mission capable” throughout Red Flag 16-3. “Notably, these numbers only reflect the six aircraft deployed to Nellis AFB,” Bardo stressed.

The pilots trained with aircraft in their most stealthy state, without any external weapons or other stores. "Training in this configuration is critical, as it allows pilots learn to effectively employ the aircraft as well as trust the low observable signature," Bardo said, suggesting that VMFA-121's pilots were not yet fully aware of how well the F-35's stealthy features might actually hide them from threats. This wouldn't be unreasonable for aviators still learning the ins and outs of any new plane and it is possible that in day-to-day training the aircraft's stealth coatings are allowed to degrade further than during combat or a major exercise like Red Flag. Also, F-35s wear radar-reflective lenses during some basic training evolutions.

Bardo did not include his squadron’s win/loss ratio for Red Flag 16-3, but blamed all losses on pilot error or the exercise’s constraints. The limits of Nellis’ training range, artificial no-fly areas, and rules that confined the jets in a 1,000 foot “altitude block,” meant the F-35s could play to their strengths, he wrote. Based on the available information, we cannot independently assess those claims.

Even with these limitations, VMFA-121’s aviators had “the ability to use the aircraft's high fidelity sensors to share data over Link-16 [data link] with fourth-generation assets with less capable sensors/radars,” Bardo explained. “This type of non-kinetic support was a force multiplier and enabled fourth generation escort assets to be more lethal and survivable.”

Still, it is unclear how often the F-35Bs were actually available to provide this support. There is very little detail about the aerial combat sorties in the executive summary in general. During air-to-air missions, Bardo said the JSFs stay on station to pass information to other aircraft after they had “expended” their mock weapons. The F-22 has done the same thing, acting as a "quarterback" of sorts for less capable assets even after their weapons bays were virtually empty.

However, Bardo noted his jets couldn't refuel in midair since none of the tankers at the exercise had the necessary probe-and-drogue equipment. On top of that, since the F-35Bs were in their stealthiest configuration during the sorties, unloading their total missile load would have meant “firing” at most four AIM-120 air-to-air missiles. It is entirely possible the majority of VMFA-121’s flying time during offensive and defense-counter air missions was spent without any available weapons regardless of its pilots specific roles.

Similar issues were apparent during the ground attack flights. During the exercise, despite having the long-range sensors, software limits meant the Marines could only engage practice targets at relatively close ranges with laser-guided GBU-12 Paveway bombs and GPS-guided GBU-32 Joint Direct Attack Munitions. “Lack of stand-off weapon in this current software configuration continue a to be one of our biggest limiting factors,” Bardo himself conceded.

Unfortunately, the F-35B’s massive lift fan, essential for its vertical take off and landing capability, is the major limiting factor when it comes to the jet's internal weapons carriage capabilities. With the added weight and size of the fan, the Marine's version can only manage to carry 1,000 pound-class weapons internally, while Air Force and Navy models can carry bombs and missiles in the 2,000 pound category. In addition, the F-35B Block 2F software package doesn’t yet work with the smaller Small Diameter Bomb glide bomb that can allow the jet to hit targets precisely from over 50 miles away.

Regardless, Bardo specifically pointed out the exercise designers had not crafted a single scenario where they believed a fifth-generation stealth jet was critical to successfully completing the mission. All in all, unsurprisingly, the Marine's assessment represents a mix bag or sorts that depicts a new plane showing promise but still in its teething phase, and services still trying to understand its new capabilities and adapt training exercises to suit them.

We are eager to see if there will be similar detailed information available about Red Flag 17-1,—which featured a larger contingent of USAF F-35As flying with more advanced software—as well as a more robust set of threats for them to deal with.