Vietnam Eyes Israel's Delilah Standoff Missile, and F-16s Could Be Next

Vietnam is looking at ways to boost their offensive capabilities in order to counterbalance China's South China Sea military buildup, and Israel could have just what they need at a very attractive price. 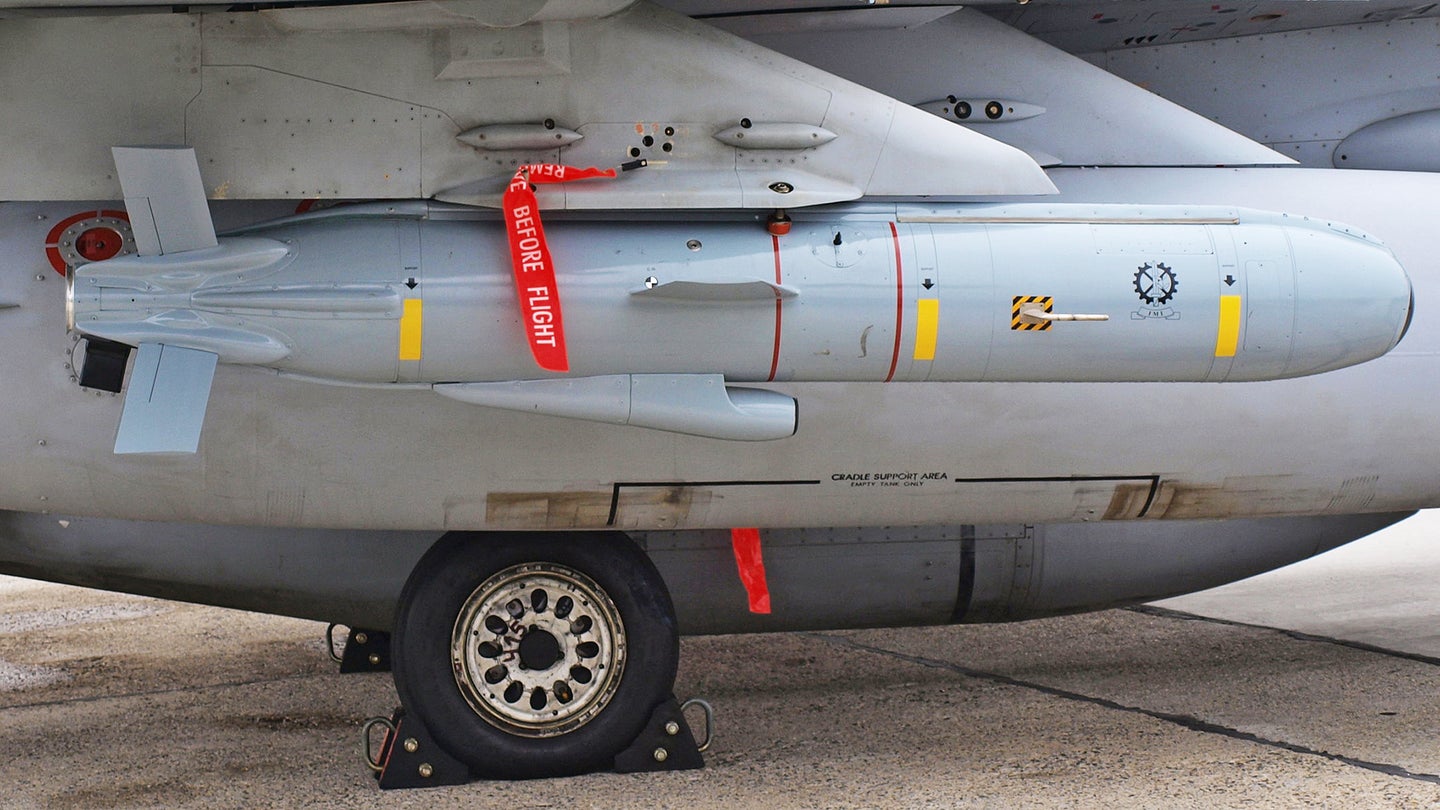 China's militarization of its man-made islands in the South China Sea and the resulting anti-access/area-denial bubbles that will cover massive swaths of that body of water in the not-so-distant future, has Vietnam shopping for weaponry that can counter Beijing's grand plans. Hanoi has already forward-deployed Israeli-built GPS-guided Extra multiple launch rocket systems to their own islands in the South China Sea—a weapon system that could rain down rockets on China's outposts with little warning. Now, Vietnam is looking towards Israel once again for its weapons needs, this time to provide an standoff multi-role cruise missile that can strike targets over 150 miles away with pinpoint accuracy.

According to Flightglobal.com, Israel's Delilah missile system was a topic of discussion between Vietnam's President Tran Dai Quang and Israel Military Industries chairman Yitzhak Aharonovitch while he was visiting Hanoi.

Israel Military Industries Delilah air-launched cruise missile has evolved over the last decade to become a reliable, highly flexible and extremely accurate standoff weapon. Delilah is quite compact when it comes to cruise missiles, weighing in at just over 400 pounds. It can pack different warheads in the 50 to 75 pound weight class and flies to its target at subsonic speeds and at various altitudes. The missile evolved from an air-launched decoy design, having roots going back decades, but its first known operational use was in 2006 against targets in Lebanon. Since then it has been a front-line weapon of choice for the IAF and it would have been heavily used in an Israeli offensive against Iranian nuclear and air defense sites if that operation were to have been launched.

Delilah uses inertial navigation with embedded GPS coupled to an autopilot for down-range navigation, and then it can switch to imaging infrared or CCD imaging for terminal guidance. It does this via data link allowing for man-in-the-loop control of the missile for final targeting. What this means is that a weapon system officer in the back of a fighter jet 150 miles away can make fine tuned adjustments on the missile's point of impact, giving the missile an extreme level of accuracy.

For instance, instead of hitting a designated building, a controller can have Delilah fly through an air duct or window on that building. It can also hit a moving vehicles and can be used as an anti-ship missile. Israel has long chosen a man-in-the-loop control option for some of their most capable air-to-ground missiles. The much larger AGM-142 Have Nap/Popeye missile, and even the much smaller anti-armor Spike/Tammuz missile use similar control concepts.

Delilah can also loiter over a target area, throttling back its turbojet engine to conserve fuel, and be retargeted on the fly. It can even be told to "go around" if the target can not be identified clearly by the operator. Although it is a key feature of the missile's design, this man-in-the-loop control concept is not absolutely necessary. The weapon can also attack fixed targets autonomously using GPS/INS guidance alone. Delilah can also be configured for the suppression/destruction of enemy air defenses role where it loiters over an area for a period of time. Once it detects an enemy radar emitter it homes in on that target and destroys it.

Although Delilah is best known as a fighter-launched medium range multi-role missile, because of its small size and relatively light weight it can also be carried by helicopters and can even be deployed via ground launchers.

IMI has been working on more advanced versions of the Delilah for export purposes, ones that could feature more range and warhead choices, and are capable of avoiding or attacking air defenses autonomously. Additionally, automatic target recognition and scene mapping capabilities could take the place of man-in-the-loop targeting for certain missions. Similar abilities are being integrated into the latest Tomahawk cruise missiles as well as Lockheed's promising and very stealthy Long-Range Anti-Ship Missile (LRASM), among others.

So what you have here is a single missile that can accomplish what a series of discreet missiles types would be traditionally needed to do so. Which along with its range and size make it perfect for a country that needs a diverse set of standoff missile capabilities but is on a tight budget. As an air launched system, a Vietnamese fixed-wing aircraft would have to fly just 150 miles from Vietnamese mainland before launching a Delilah missile at a target on China's sprawling Fiery Cross Reef island outpost. A Delilah missile could reach China's strategic Hainan Island without needing an aircraft delivery system at all, instead it could be shore-launched. As such, you can see how the system is uniquely suited for Vietnam's regional needs, and the fact that it can attack ships too makes it all that more attractive.

There is the issue of what Vietnamese aircraft would put such a missile to use. Their Su-30MK2 Flankers could possibly be adapted to employ the missile, and it would not be the first time Israeli avionics found their way into to Russia's iconic heavy-fighter design. Vietnam's Russian-built helicopters could also be adapted to sport the missile, but it would not be ideal. Beyond their existing fighter platforms, Vietnam may also opt to procure western fighter aircraft, and there are rumblings that this could be underway as part of a larger initiative to turn away from Hanoi's traditional sources of weaponry.

Israel may have just the jets to sell them with their new missiles—40 surplus F-16A/Bs "Netz" fighters that are currently up for sale. Israel Aerospace Industries could refurbish these jets indigenously with advanced multi-mode radars, electronic warfare suites and new cockpit avionics. Additionally, IAI can also apply structural upgrades to the used jets to give them thousands of hours of additional service life. Doing so would give Vietnam a uniquely capable and supportable western fighter aircraft that is tailored to employ the Delilah missile, along with other Israeli-built air-ground and air-to-air munitions—and they would not have to deal with the Washington bureaucracy to obtain them.

If Vietnam were to execute such a strategy, China would not be happy. But considering the changing geopolitical and military realities in Southeast Asia, Vietnam has to do something to further bolster its offensive capabilities. Seeing that a unique Israeli weapon system is already being by Vietnam used to counter-balance China's military expansion in the region, it makes sense that Hanoi would go to the same source to continue doing so, especially if that source can provide big capabilities at a relatively low price. Not just that, but with Vietnam spending increasing defense dollars with Israel for other air combat needs, including ordering high-end SPYDER air defense systems, getting a fighter aircraft that can interoperate intimately with these systems is only logical.

One thing is for certain—fielding a couple squadrons of highly upgraded F-16s armed with Delilah missiles would give Vietnam a considerable boost in power projection capabilities, and would be a worthwhile step in countering China's military expansion into the South China Sea.